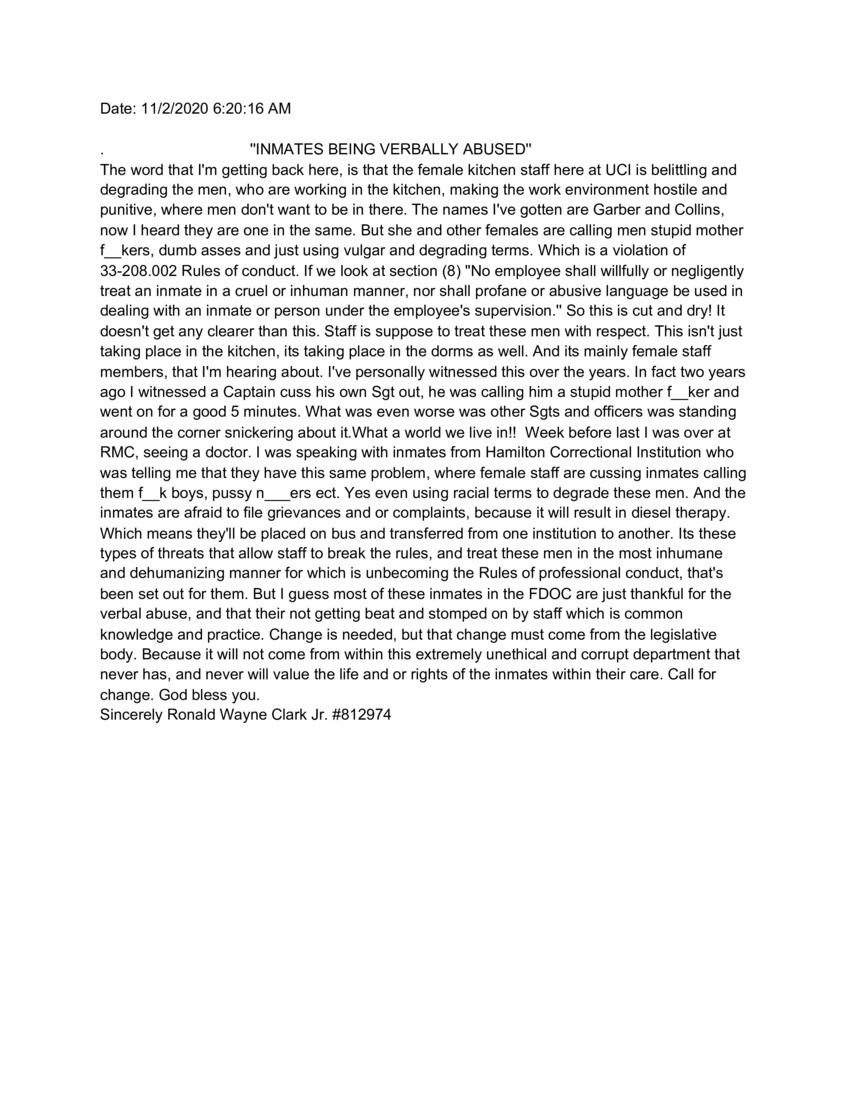 The word that I'm getting back here, is that the female kitchen staff here at UCI is belittling and degrading the men, who are working in the kitchen, making the work environment hostile and punitive, where men don't want to be in there. The names I've gotten are Garber and Collins, now I hear they are one and the same. But she and other females are calling men stupid mother f__kers, dumb asses, and just using vulgar and degrading terms. Which is a violation of 33-208.002 Rules of conduct. If we look at section (8) "No employee shall willfully or negligently treat an inmate in a cruel or inhuman manner, nor shall profane or abusive language be used in dealing with an inmate or person under the employee's supervision." So this is cut and dry! It doesn't get any clearer than this. Staff is supposed to treat these men with respect. This isn't just taking place in the kitchen; it's taking place in the dorms as well. And it's mainly female staff members, that I'm hearing about. I've personally witnessed this over the years. In fact two years ago I witnessed a Captain cuss his own Sergeant out, he was calling him a stupid mother f__ker and went on for a good five minutes. What was even worse was other Sergeants and officers were standing around the corner snickering about it. What a world we live in!! Week before last, I was over at RMC, seeing a doctor. I was speaking with inmates from Hamilton Correctional Institution who was teling me that they have this same problem, where female staff are cussing inmates calling them f__k boys, pussy n__ers etc. Yes even using racial terms to degrade these men. And the inmates are afraid to file grievances and/or complaints, because it will result in diesel therapy. Which means they'll be placed on bus and transferred from one institution to another. It's these types of threats that allow staff to break the rules, and treat these men in the most inhumane and dehumanizing manner for which is unbecoming the Rules of professional conduct, that's been set out for them. But I guess mots of these inmates are just thankful for the verbal abuse, and that they're not getting beat and stomped on by staff which is common knowledge and practice. Change is needed, but that change must come from the legislative body. Because it will not come from within this extremely unethical and corrupt department that never has, and never will value the life and/or rights of the inmates within their care. Call for change. God bless you.
Sincerely Ronald Wayne Clark Jr. #812974