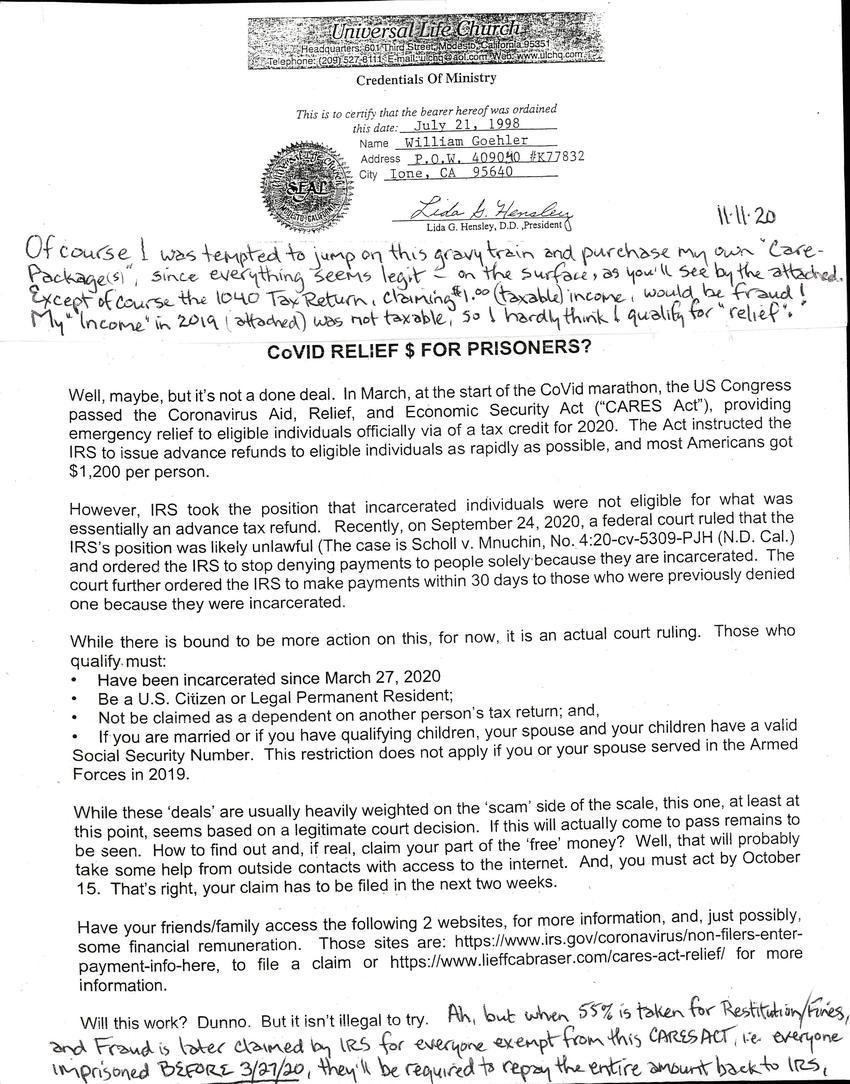 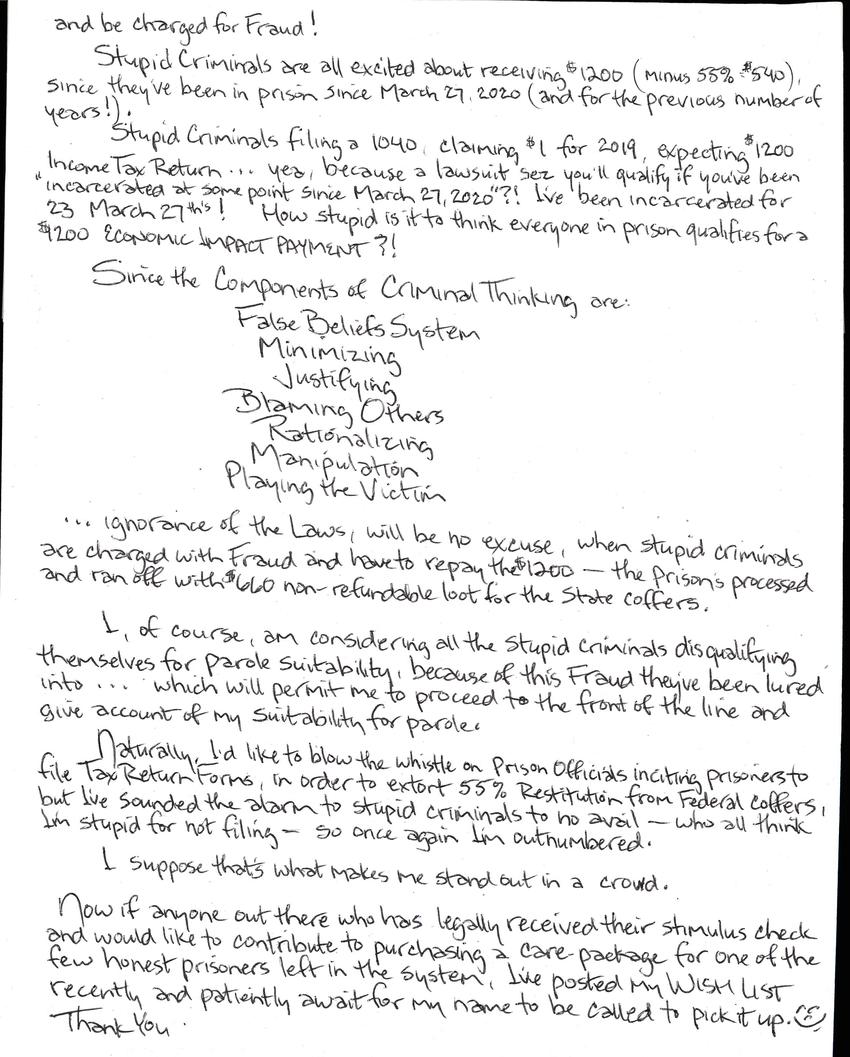 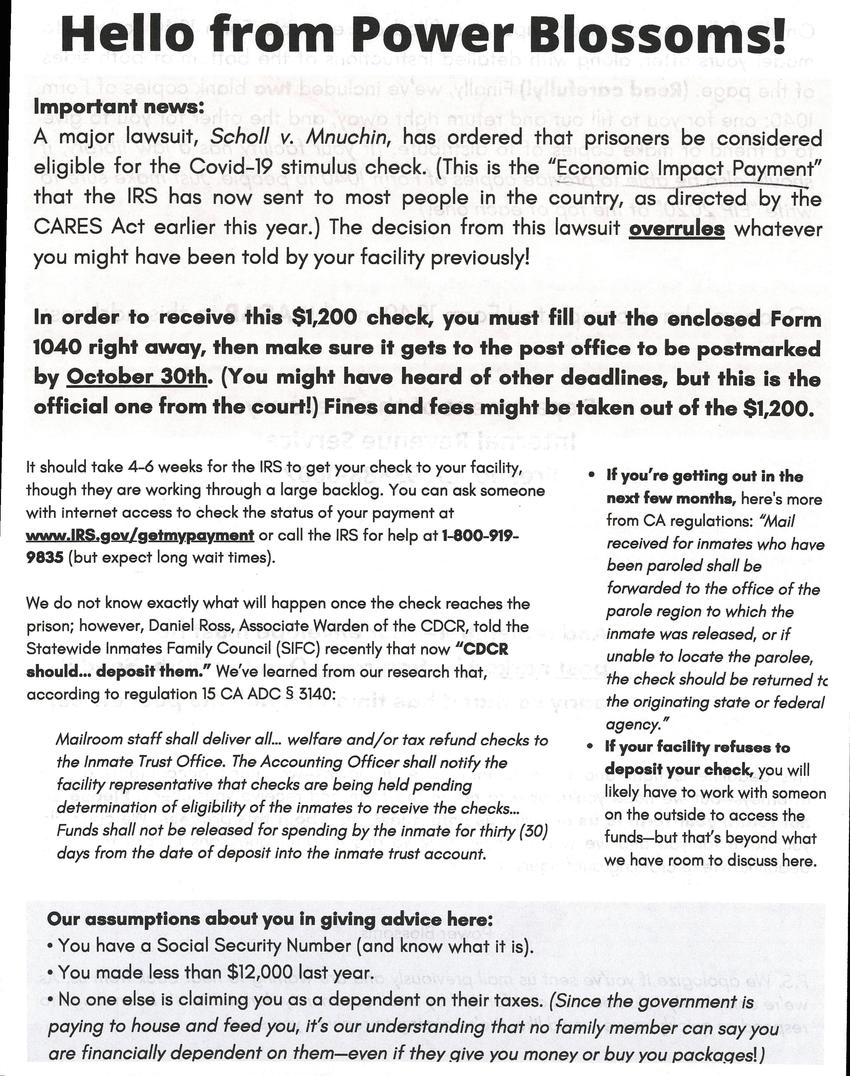 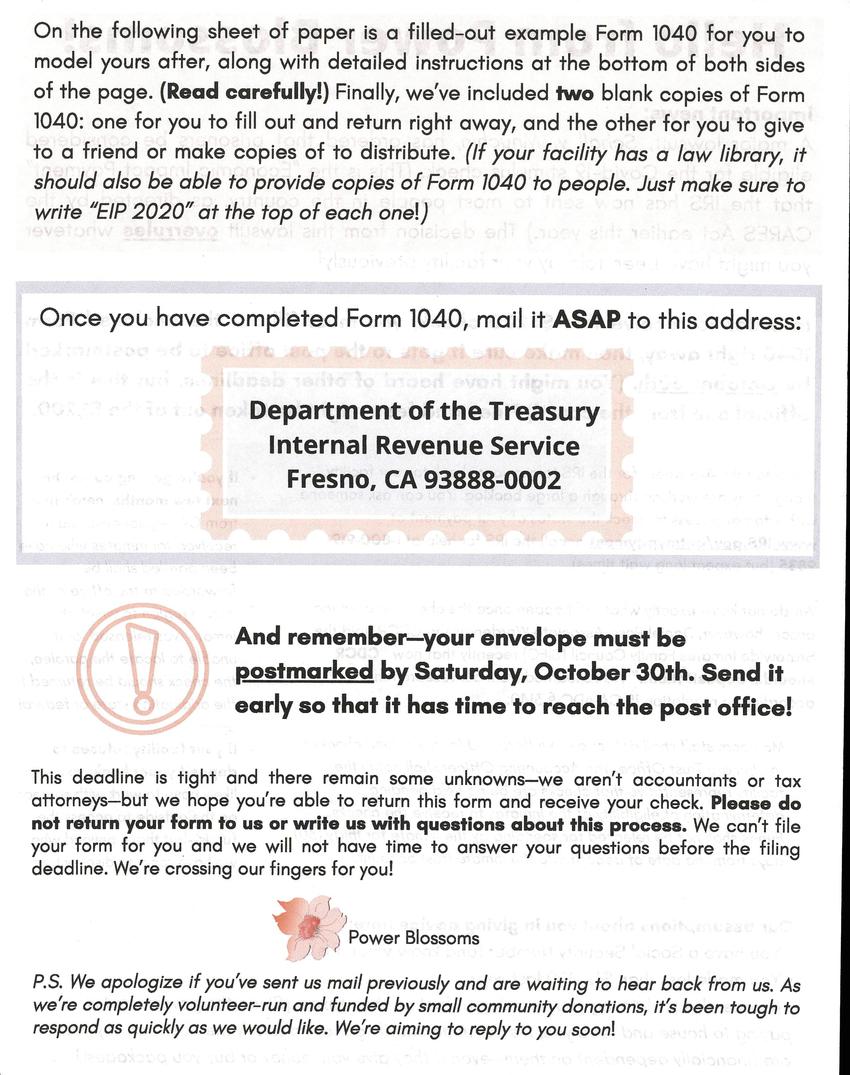 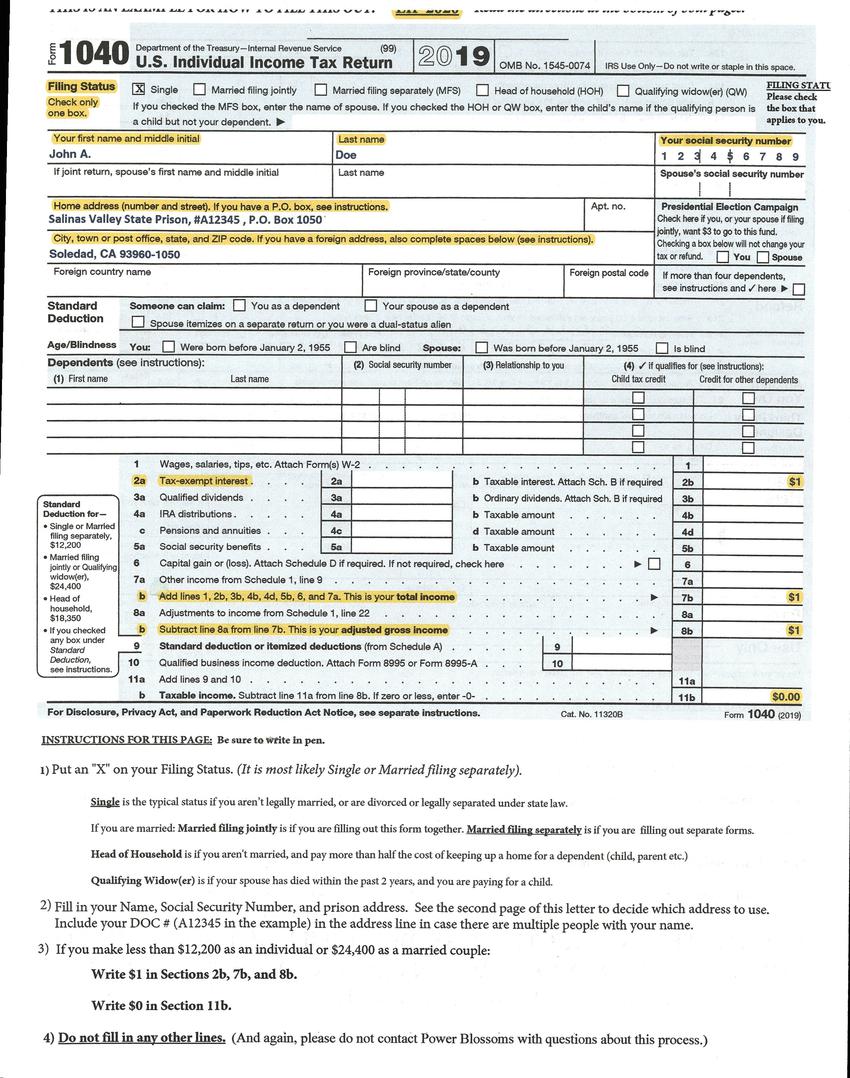 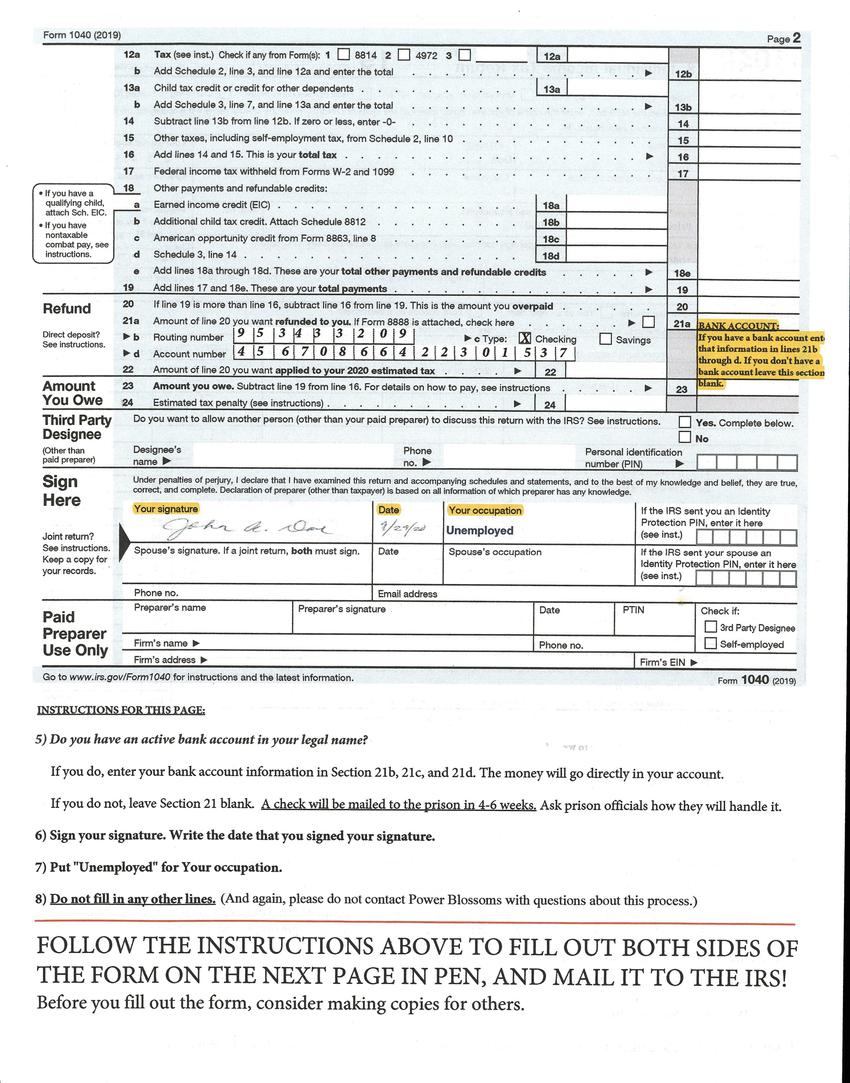 Well, maybe, but it's not a done deal. In March, at the start of the CoVid marathon, the US Congress passed the Coronavirus Aid, Relief, and Economic Security Act ("CARES Act"), providing emergency relief to eligible individuals officially via a tax credit for 2020. The Act instructed the IRS to advance refunds to eligible individuals as rapidly as possible, and most Americans got $1,200 per person.

However, The IRS took the position that incarcerated individuals were not eligible for what was essentially an advance tax refund. Recently, on September 24, 2020, a federal court ruled that the IRS's position was likely unlawful (The case is Scholl v. Mnuchin, No. 4:20-cv-5309-PJH (N.D. Cal.) and ordered the IRS to stop denying payments to people solely because they are incarcerated. The court further ordered the IRS to make payments within 30 days to those who were previously denied one because they were incarcerated.

While there is bound to be more action on this, for now, it is an actual court ruling. Those who qualify must:
- Have been incarcerated since March 27, 2020
- Be a U.S. Citizen or Legal Permanent Resident;
- Not be claimed as a dependent on another person's tax return; and,
- If you are married or if you have qualifying children, your spouse and your children have a valid Social Security Number. This restriction does not apply if you or your spouse served in the Armed Forces in 2019.

While these 'deals' are usually heavily weighted on the 'scam' side of the scale, this one, at lest this point, seems based on a legitimate court decision. If this will actually cone to pass remains to be seen. How to find out and, if real, claim your part of the 'free' money? Well, that will probably take some help from outside contacts with access to the internet. And, you must act by October 15. That's right, your claim has to be filed in the next two weeks.

Will this work? Dunno. But it isn't illegal to try. [Handwritten Portion] Ah, but when 55% is taken for Restitution/Fines, and Fraud is later claimed by the IRS for everyone exempt from this CARES ACT. i.e. everyone imprisoned BEFORE 3/27/20, they'll be required to repay the entire amount back to IRS, and be charged for Fraud!

Since the components of criminal thinking are:
False Beliefs System
Minimizing
Justifying
Blaming Others
Rationalizing
Manipulation
Playing the Victim
… ignorance of the Laws, will be no excuse, when stupid criminals are charged with Fraud and have to repay the $1200 - the prisons processed and wan off with $660 non-refundable loot for the state coffers.

I, of course, am considering all the stupid criminals disqualifying themselves for parole suitability, because of this Fraud they've been lured into... which will permit me to proceed to the front of the line and give account of my suitability for parole.

Naturally, I'd like to blow the whistle on Prison Officials inciting prisoners to file Tax Return Forms, in order to extort 55% Restitution from Federal Coffers, but I've sounded the alarm to stupid criminals to no avail - who all think I'm stupid for not filing - so once again I'm outnumbered.

I suppose that's what makes me stand out in a crowd.

Now if anyone out there who has legally received their stimulus check and would like to contribute to purchasing a care-package for one of the few honest prisoners left in the system, I've posted my WISH LIST recently and patiently await for my name to be called to pick it up. :^)
Thank you
[/Handwritten portion]

[Sub Title] Important news: [/Sub titles]
A major lawsuit, School v. Mnuchin, has ordered that prisoners be considered eligible for the Covid-19 stimulus check. (This is the "Economic Impact Payment" that the IRS has now sent to most people in the country, as directed by the CARES act earlier this year.) The decision from this lawsuit overrules whatever you might have been told by your faculty previously!

In order to receive this $1,200 check, you must fill out the enclosed Form 1040 right away, then make sure it gets to the pst office to be postmarked by October 30th. (You might have heard of the other deadlines, but thus is the official one from the court!) Fines and fees might be taken out of the $1,200.

[left text column] It should take 4-6 weeks for the IRS to get your check to your facility, though they are working through a large backlog. You can ask someone with internet access to check the status of your payment at www.IRS.gov/getmypayment or call the IRS for help at 1-800-919-9835 (but expect long wait times).

We do not know exactly what will happen once the check reaches the prison; however, Daniel Ross, Associate Warden of the CDCR, told the Statewide Inmates Family Council (SIFC) recently that now "CDCR should deposit them." We've learned from our research that, according to regulation 15 CA ADC SS[note to next transcriber: please double check this symbol] 3140:
[quote]
Mailroom staff shall deliver all... welfare and/or tax refund checks to the Inmate Trust Office. The Accounting Officer shall notify the facility representative that checks are being held pending determination of eligibility to the inmates to receive the checks... Funds shall not be released for spending by the inmate for thirty (30) days from the date of deposit into the inmate trust account.
[/quote]
[/left text column]