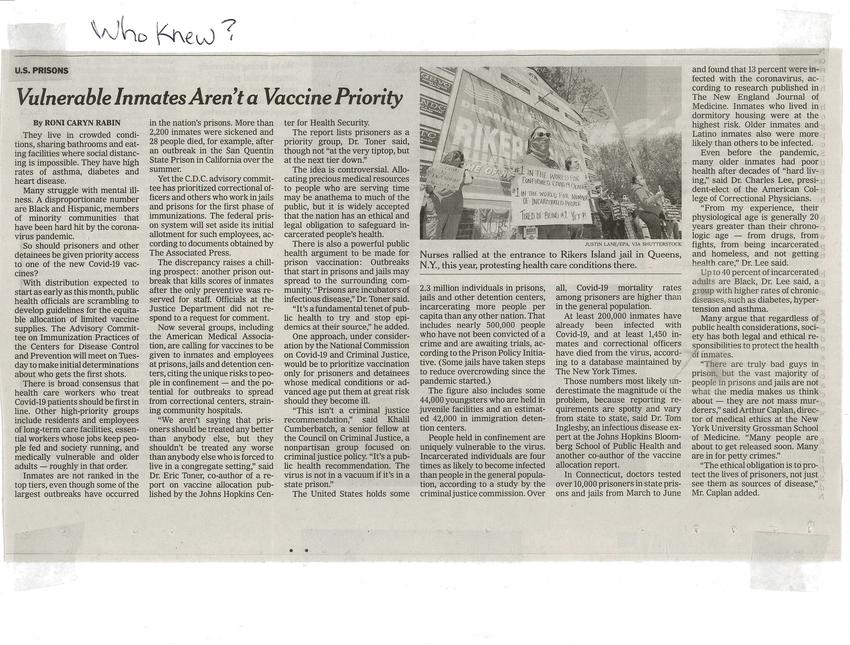 They live in crowded conditions, sharing bathrooms and eating facilities where social distancing is impossible. They have high rates of asthma, diabetes, and heart disease.

Many struggle with mental illness. A disproportionate number are Black and Hispanic, members of minority communities that have been hard hit by the coronavirus pandemic.

So should prisoners and other detainees be given priority access to one of the new Covid-19 vaccines?

With distribution expected to start as early as this month, public health officials are scrambling to develop guidelines for the equitable allocation of limited vaccine supplies. The Advisory Committee on Immunization Practices of the Centers for Disease Control and Prevention will meet on Tuesday to make initial determinations about who gets the first shots.

There is broad consensus that health care workers who treat Covid-19 patients should be first in line. Other high-priority groups include residents and employees of long-term care facilities, essential workers whose jobs keep people fed and society running, and medically vulnerable and older adults - roughly in that order.

Inmates are not ranked in the top tiers, even though some of the largest outbreaks have occurred in the nation's prisons. More than 2,200 inmates were sickened and 28 people died, for example, after an outbreak in the San Quentin State Prison in California over the summer.

Yet the C.D.C. advisory committee has prioritized correctional officers and others who work in jails and prisons for the first phase of immunizations. The federal prison system will set aside its initial allotment for such employees, according to document obtained by The Associated Press.

The discrepancy raises a chilling prospect; another prison outbreak that kills scores of inmates after the only preventative was reserved for staff. Officials at the Justice Department did not respond to a request for comment.

Now several groups, including the American Medical Association, are calling for vaccines to be given to inmates and employees are prisons, jails, and detention centers, citing the unique risks to people in confinement - and the potential for outbreaks to spread from correctional centers, straining community hospitals.

"We aren't saying that prisoners should be treated any better than anybody else, but they shouldn't be treated worse than anybody else who is forced to live in a congregate setting," said Dr. Eric Toner, co-author of a report on vaccine allocation published by the John Hopkins Center for Health Security.

The report lists prisoners as a priority group, Dr. Toner said, though not "at the very tiptop, but at the next tier down."

The idea is controversial. Allocation precious medical resources to people who are serving time may be anathema to much of the public, but it is widely accepted that the nation has an ethical and legal obligation to safeguard incarcerated people's health.

There is also a powerful public health argument to be made for prison vaccination: Outbreaks that start in prisons and jails may spread to the surrounding community. "Prisons are incubators of infectious disease," Dr. Toner said.

"It's fundamental tenet of public health to try and stop epidemics at their source," he added.

One approach, under consideration by the National Commission on Covid-19 and Criminal Justice, would be to prioritize vaccination only for prisoners and detainees whose medical conditions or advanced age put them at great risk should they become ill.

The United States holds some 2.3 million individuals in prisons, jails and other detention centers, incarcerating more people per capita than any other nation. That includes nearly 500,000 people who have not been convicted of a crime and are awaiting trials, according to the Prison Policy Initiative. (Some jails have taken steps to reduce overcrowding since the pandemic started.)

The figure also includes some 44,000 youngsters who are held in juvenile facilities and an estimated 42,000 in immigration detention centers.

At least 200,000 inmates have already been infected with Covid-19, and at least 1,450 inmates and correctional officers have died from the virus, according to a database maintained by The New York Times.

Those numbers most likely underestimate the magnitude of the problem, because reporting requirements are spotty and vary from state to state, said Dr. Tom Inglesby, an infectious disease expert at the Johns Hopkins Bloomberg School of Public Health and another co-author of the vaccine allocation report.

In Connecticut, doctors tested over 10,000 prisoners in state prisons and jails from March to June and found that 13 percent were infected with the coronavirus, according to research published in The New England Journal of Medicine. Inmates who lived in dormitory housing were at the highest risk. Older inmates and Latino inmates also were more likely than others to be infected.

Even before the pandemic, many older inmates had poor health after decades of "hard living," said Dr. Charles Lee, president-elect of the American College of Correctional Physicians.

"From my experience, their physiological age is generally 20 years greater than their chronologic age - from drugs, from fights, from being incarcerated and homeless, and not getting health care," Dr. Lee said.

Up to 40 percent of incarcerated adults are Black, Dr. Lee said, a group of higher rates of chronic diseases, such as diabetes, hypertension and asthma.

Many argue that regardless of public health considerations, society has both legal and ethical responsibilities to protect the health of inmates.

"There are truly bad guys in prison, but the vast majority of people in prisons and jails are not what the media makes us think about - they are not mass murderers," said Arthur Caplan, director of medical ethics at the New York University Grossman School of Medicine. "Many people are about to get released soon. Many are in for petty crimes,"

"The ethical obligation is to protect the lives of prisoners, not just see them as sources of disease," Mr. Caplan added.