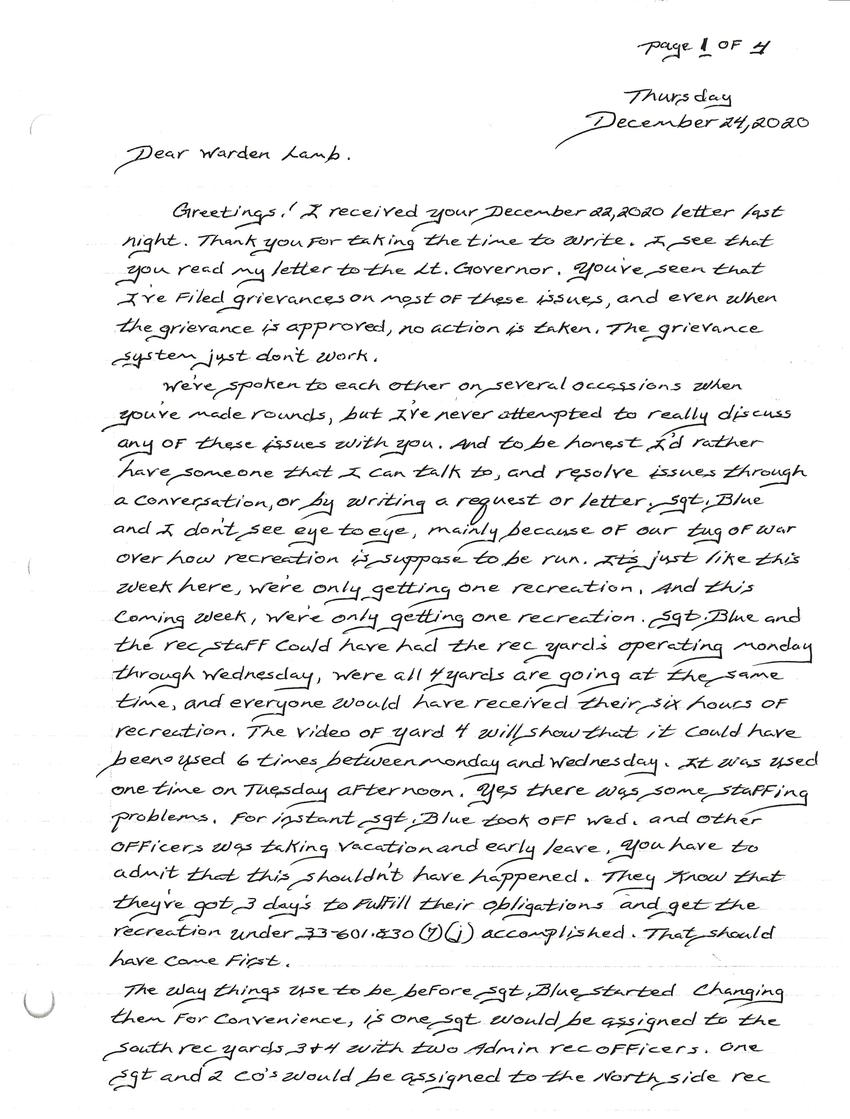 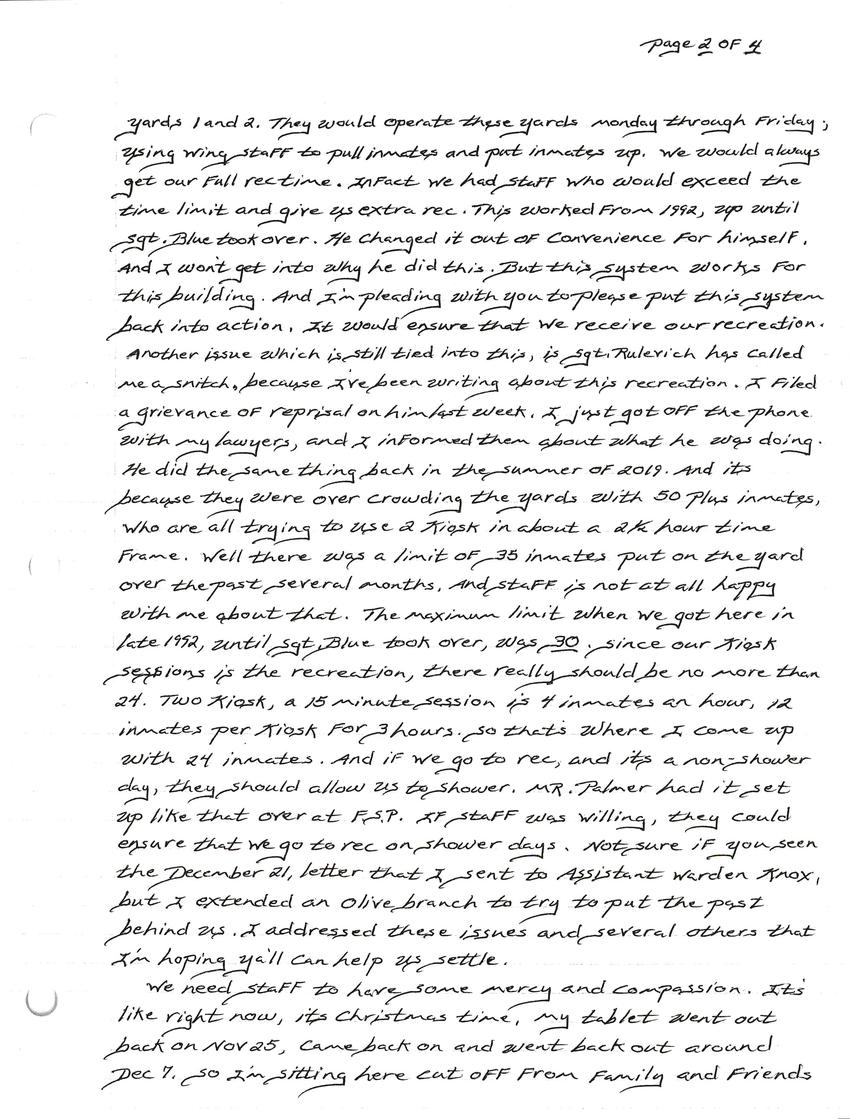 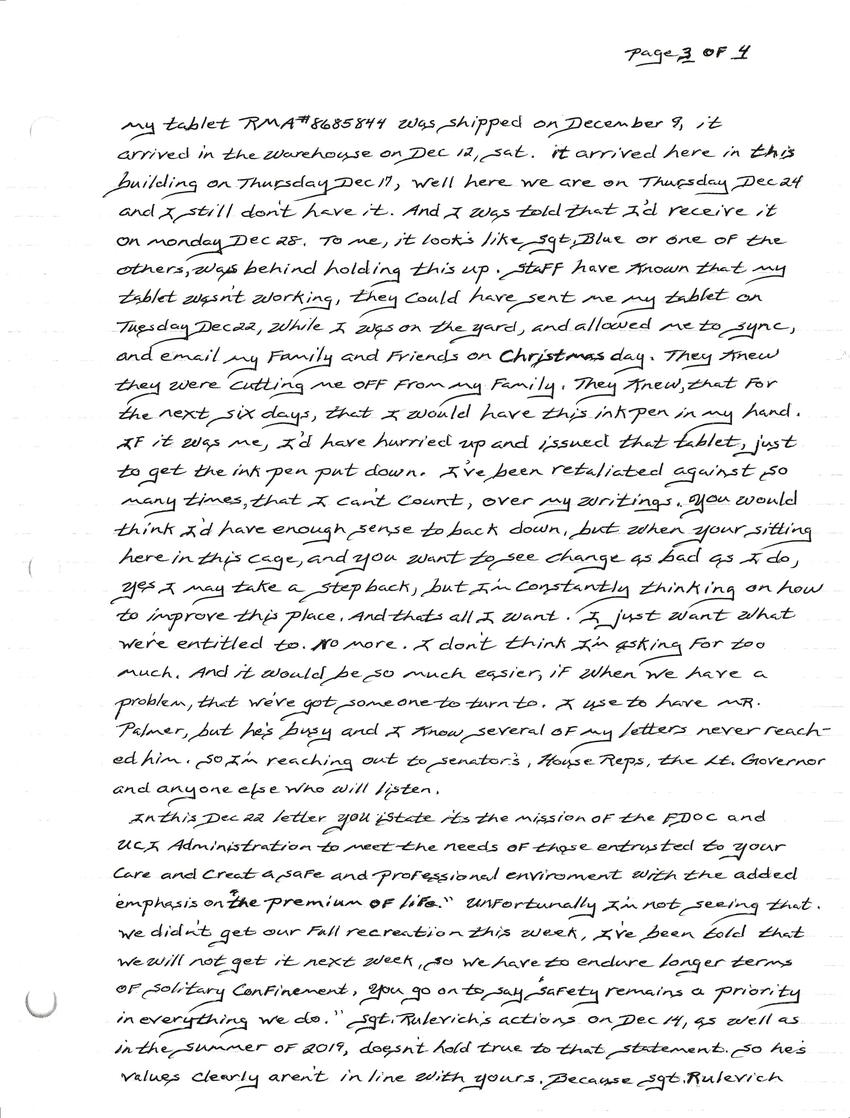 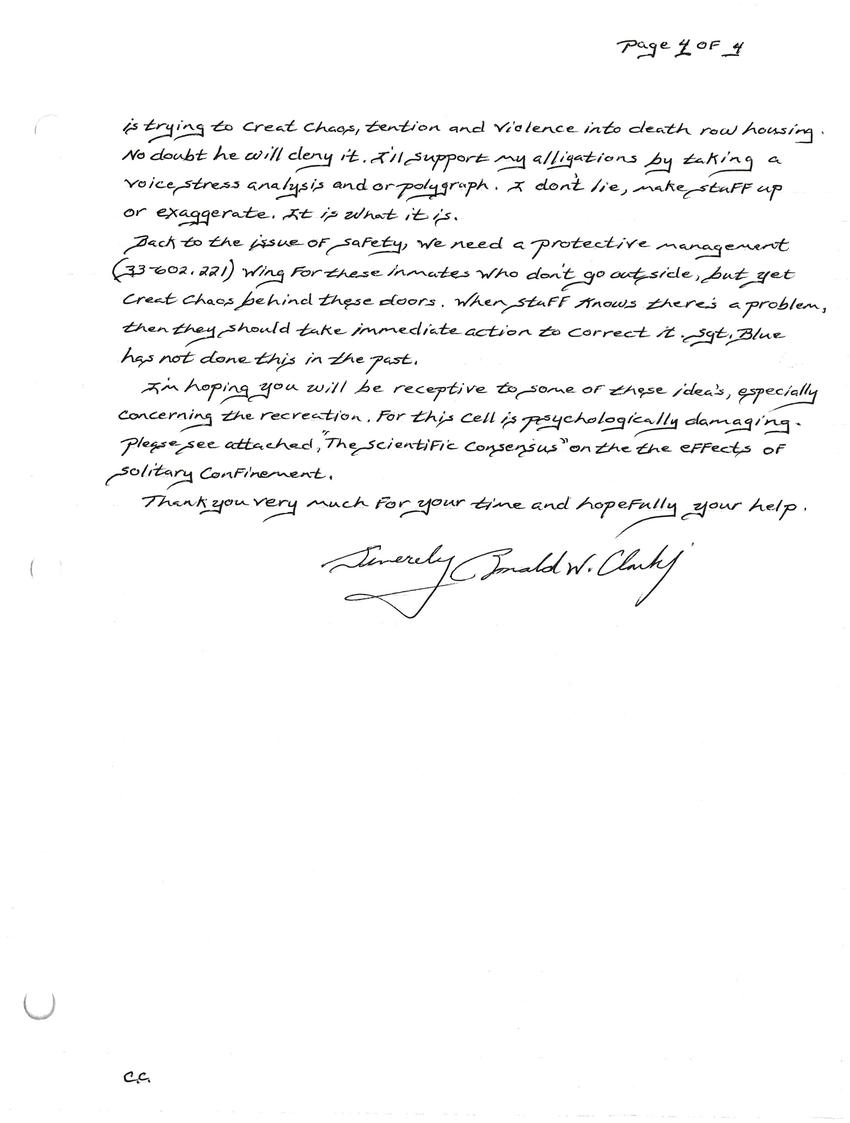 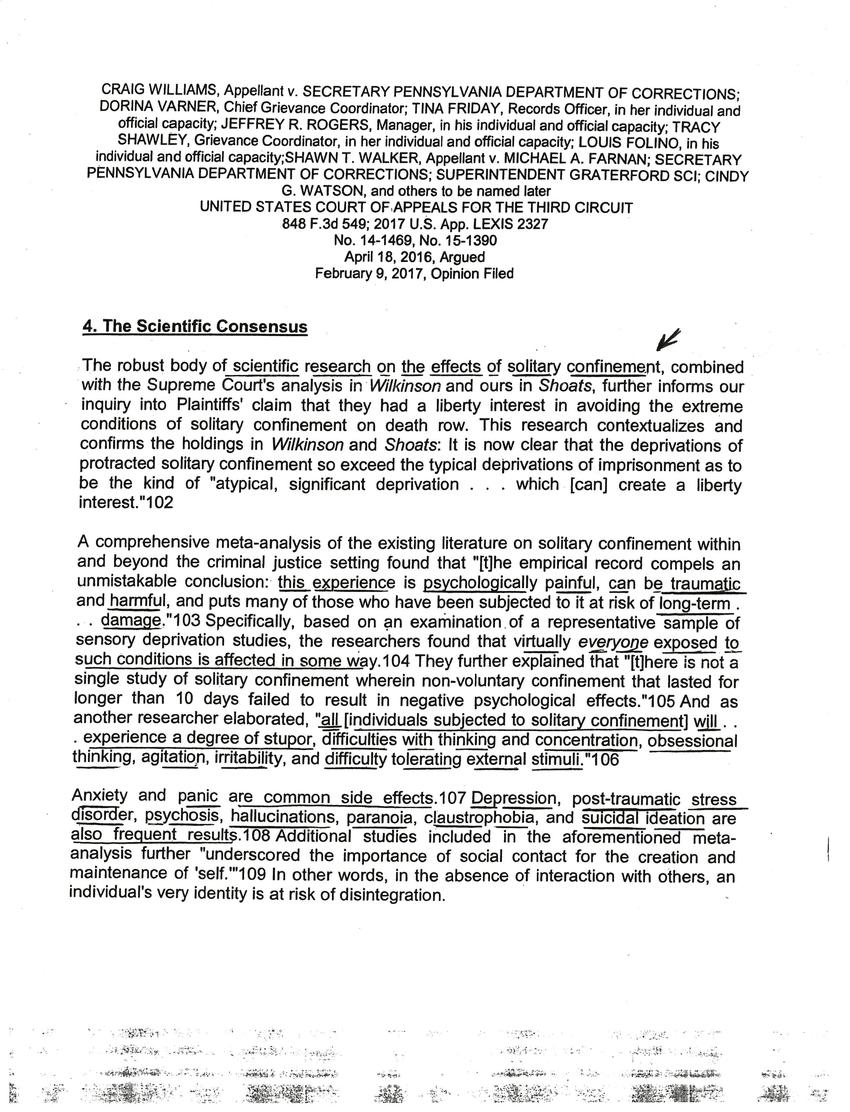 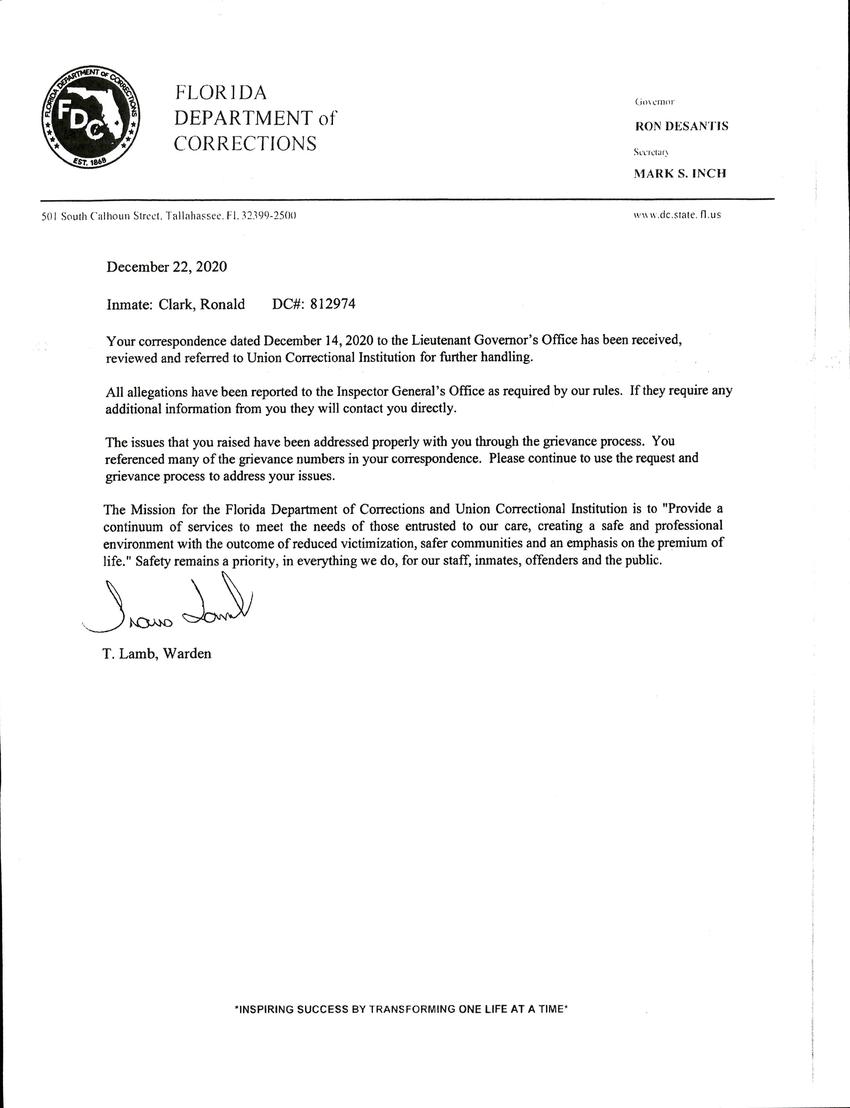 4. The Scientific Consensus
The robust body of scientific research on the effects of solitary confinement, combined with the Supreme Court's analysis in Wilkinson and ours in Shoats, further informs our inquiry into Plaintiffs' claim that they had a liberty interest in avoiding the extreme conditions of solitary confinement on death row. This research contextualizes and confirms the holdings in Wilkinson and Shoats: It is now clear that the deprivations of protracted solitary confinement so exceed the typical deprivations of imprisonment as to be the kind of "atypical, significant deprivation...which [can] create a liberty interest."102
A comprehensive meta-analysis of the existing literature on solitary confinement within and beyond the criminal justice setting found that "[t]he empirical record compels an unmistakable conclusion: this experience is psychologically painful, can be traumatic and harmful, and puts many of those who have been subjected to it at risk of long-term...damage."103 Specifically, based on an examination of a representative sample of sensory deprivation studies, the researchers found that virtually everyone exposed to such conditions is affected in some way. 104 They further explained that "[t]here is not a single study of solitary confinement wherein non-voluntary confinement that lasted for longer than 10 days failed to result in negative psychological effects"105 And as another researcher elaborated, "all [individuals subjected to solitary confinement] will...thinking agitation, irritability, and difficulty tolerating external stimuli."106
Anxiety and panic are common side effects. 107 Depression, post-traumatic stress disorder, psychosis, hallucinations, paranoia, claustrophobia, and suicidal ideation are also frequent results. 108 Additional studies included in the aforementioned meta-analysis further "underscored the importance of social contact for the creation and maintenance of 'self.'"109 In other words, in the absence of interaction with others, an individual's very identity is at risk of disintegration.

FLORIDA DEPARTMENT of CORRECTIONS
Governor
RON DESANTIS
Secretary
MARK S. INCH
501 South Calhoun Street, Tallahassee, FL 32399-2500
www.de.state.fl.us
December 22, 2020
Inmate: Clark, Ronald DC#:812974
Your correspondence dated December 14,2020 to the Lieutenant Governor's Office has been received, reviewed and referred to Union Correctional Institution for further handling.
All allegations have been reported to the Inspector General's Office as required by our rules. If they require any additional information from you they will contact you directly.
The issues that you raised have been addressed properly with you through the grievance process. You referenced many of the grievance numbers in your correspondence. Please continue to use the request and grievance process to address your issues.
The Mission for the Florida Department of Corrections and Union Correctional Institution is to "Provide a continuum of services to meet the needs of those entrusted to our care, creating a safe and professional environment with the outcome of reduced victimization, safer communities and an emphasis on the premium of life." Safety remains a priority, in everything we do, for our staff, inmates, offenders and the public.