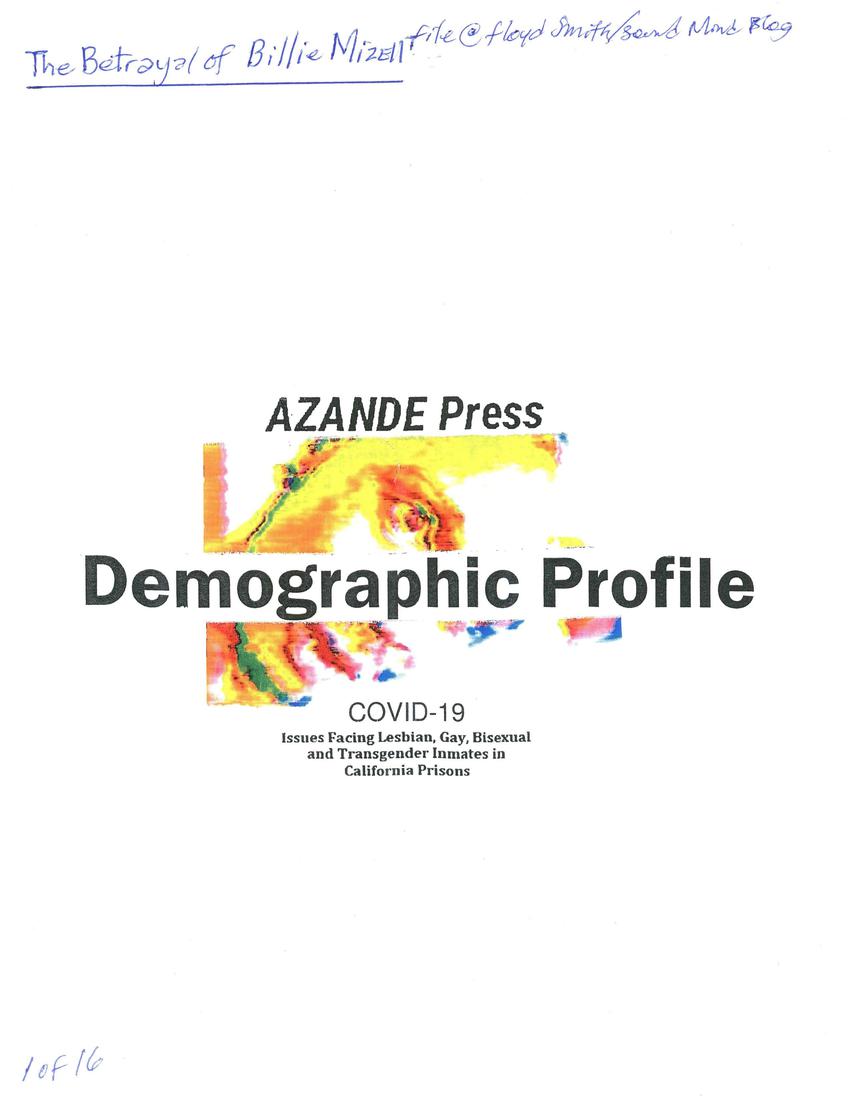 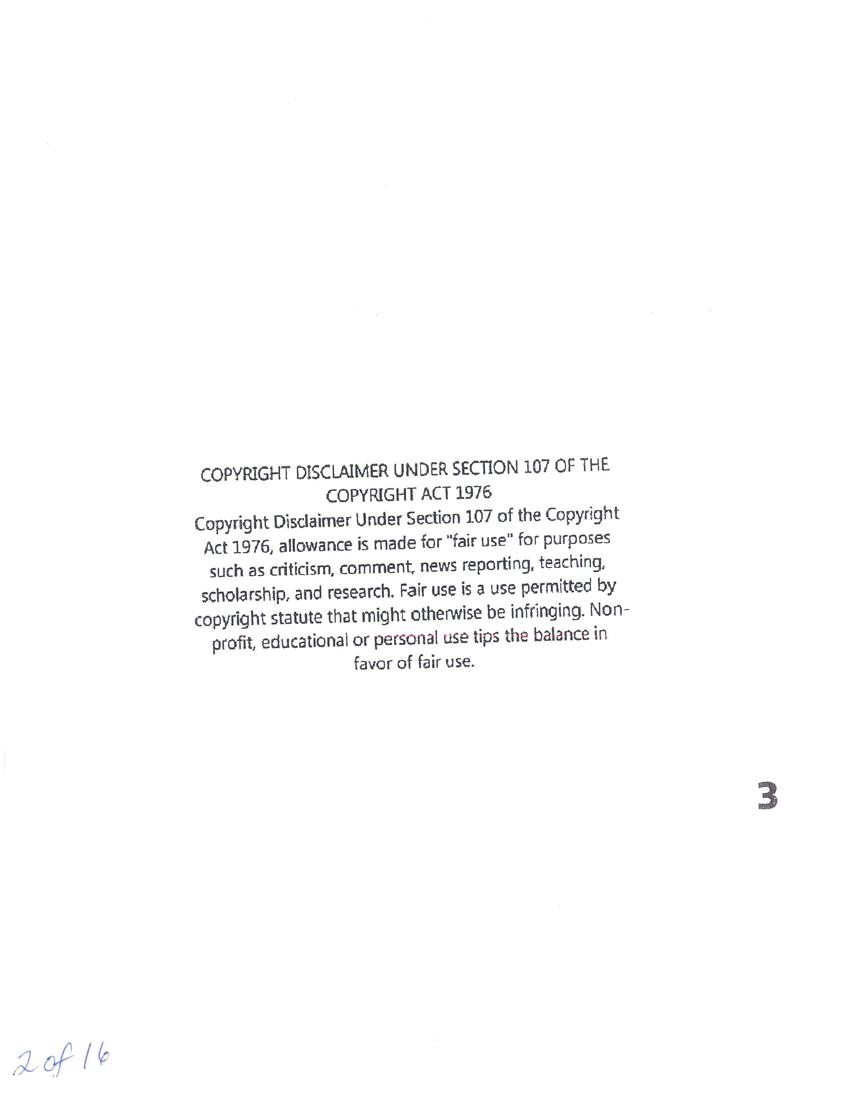 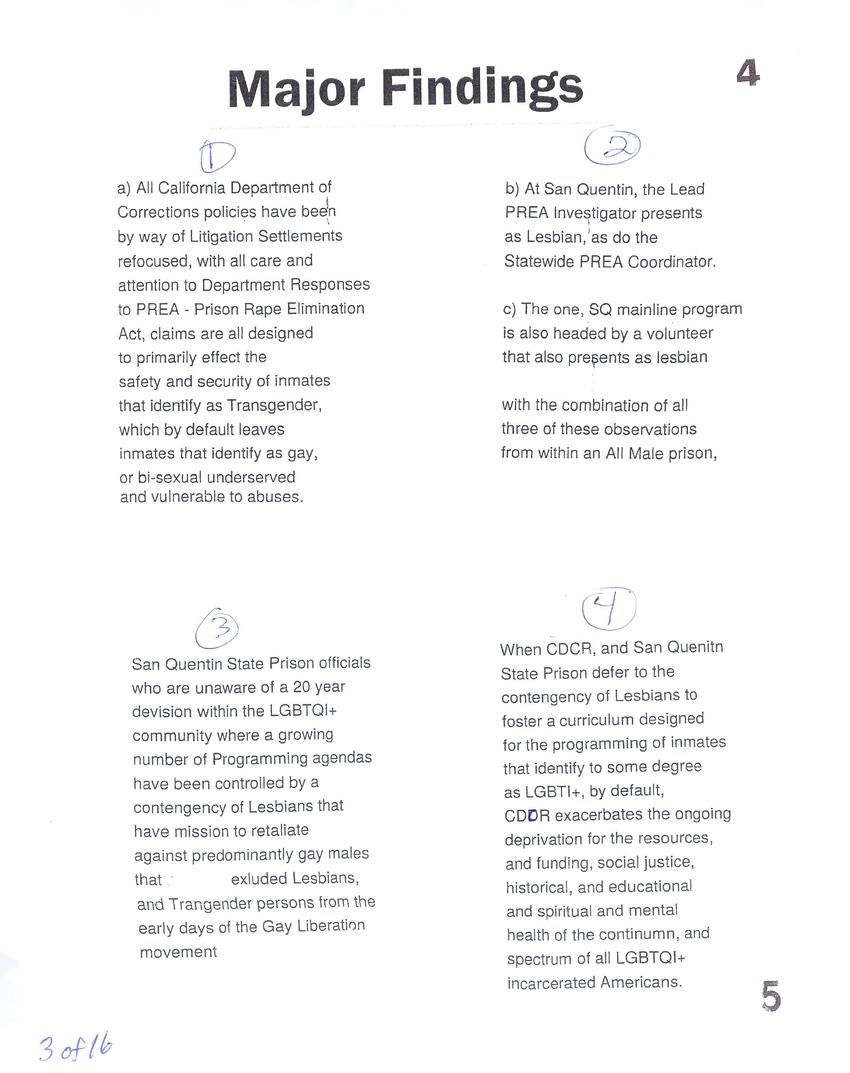 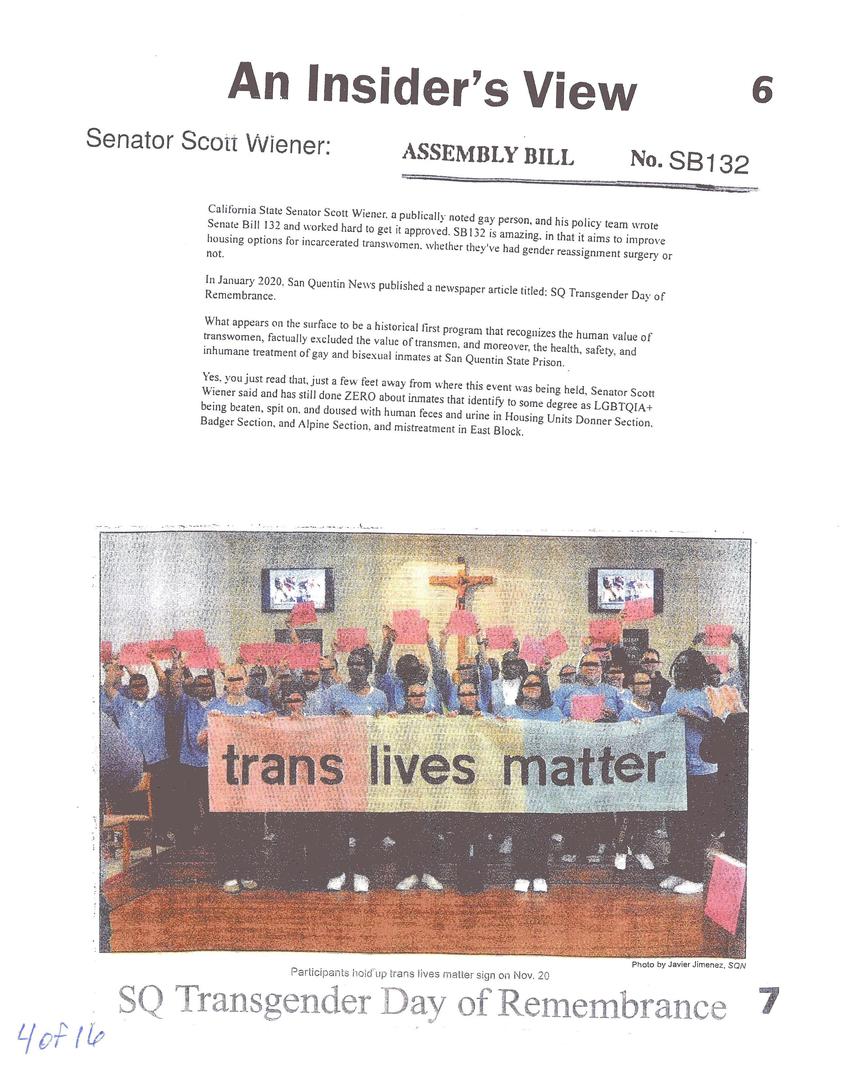 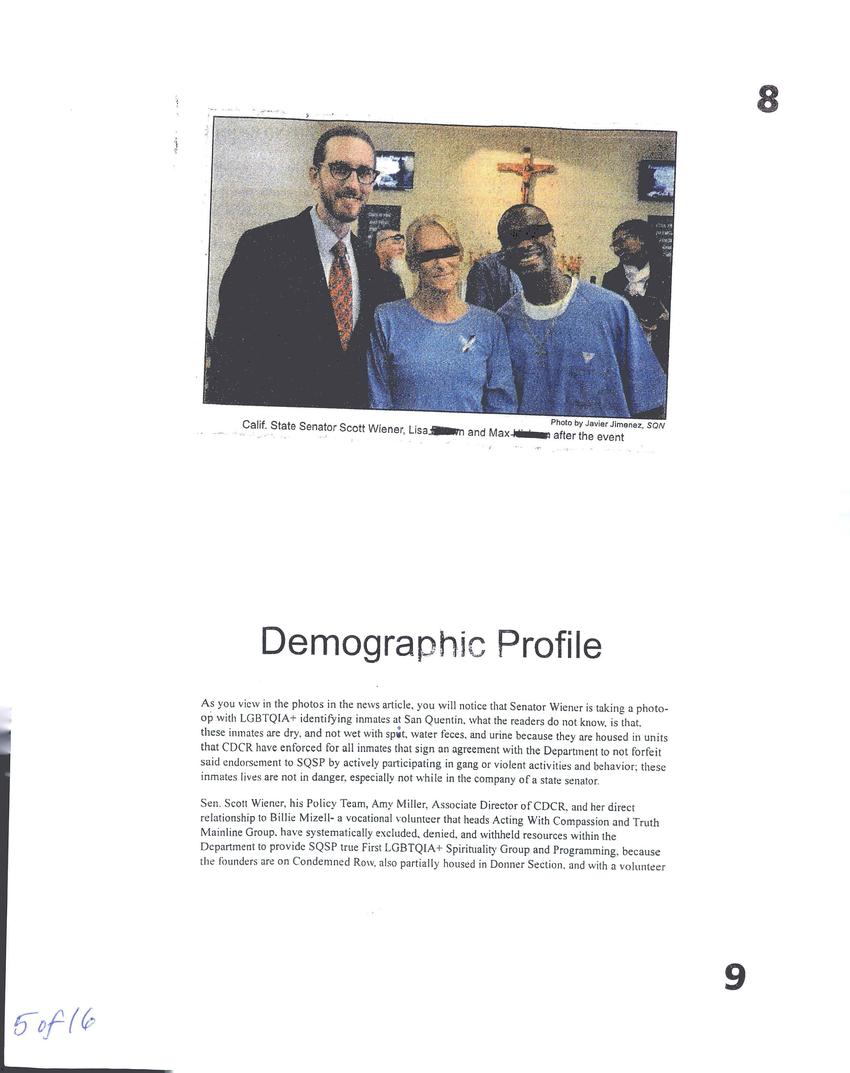 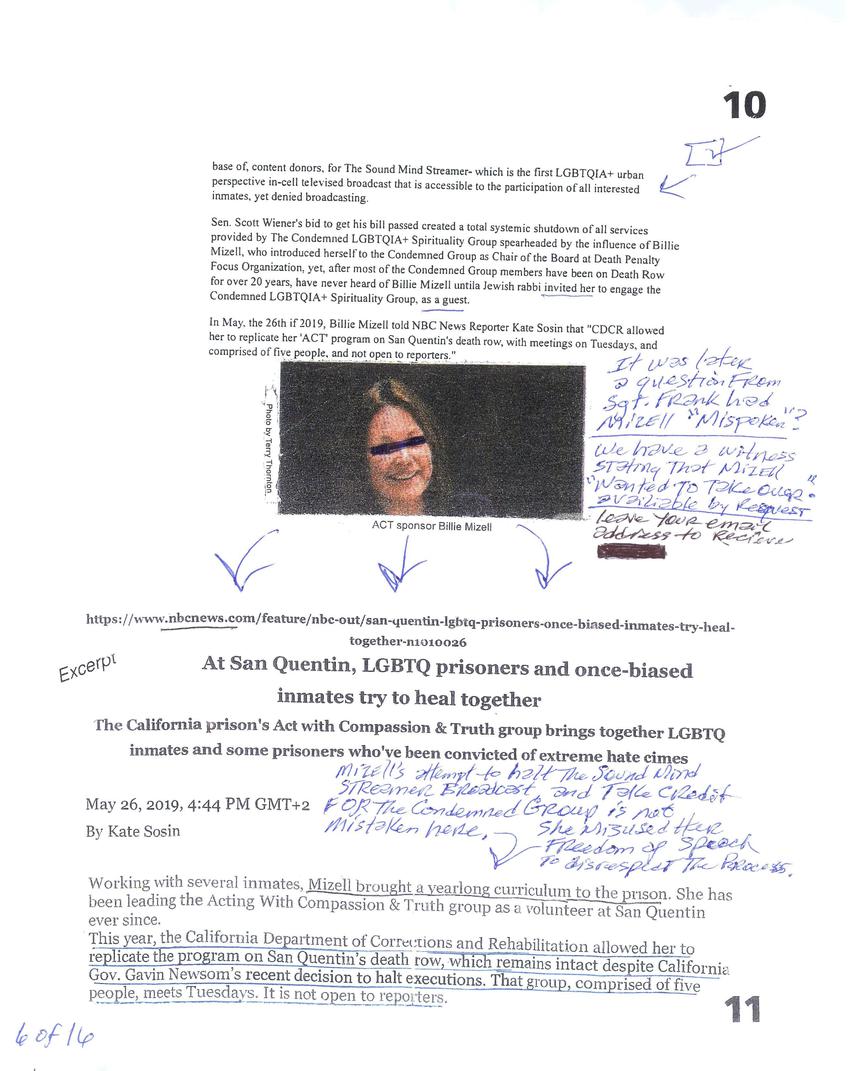 Major Findings -- 4
(1) a) All California Department of Corrections policies have been by way of Litigation Settlements refocused, with all care and attention to Department Responses to PREA - Prison Rape Elimination Act, claims are all designed to primarily effect the safety and security of inmates that identify as Transgender, which by default leaves inmates that identify as gay, or bi-sexual underserved and vulnerable to abuses.
(2) b) At San Quentin, the Lead PREA Investigator presents as Lesbian, as do the Statewide PREA Coordinator.
c) The one, SQ mainline program is also headed by a volunteer that also presents as lesbian with the combination of all three of these observations from within an All Male prison.
(3) San Quentin State Prison officials who are unaware of a 20 year devision within the LGBTQI+ community where a growing number of Programming agendas have been controlled by a contingency of Lesbians that have mission to retaliate against predominantly gay males that excluded Lesbians, and Trangender persons from the early days of the Gay Liberation movement.
(4) When CDCR, and San Quentin State Prison defer to the contingency of Lesbians to foster a curriculum designed for the programming of inmates that identify to some degree as LGBTQI+, by default, CDCR exacerbates the ongoing deprivation for the resources, and funding, social justice, historical, and educational and spiritual and mental health of the continuum, and spectrum of all LGTBQI+ incarcerated Americans.
3 of 16 -- 5 [page ends]

An Insider's View -- 6
Senator Scott Wiener: ASSEMBLY BILL No. SB132
California State Senator Scott Weiner, a publicly noted gay person, and his policy team wrote Senate Bill 132 and worked hard to get it approves. SB132 is amazing in that it aims to improve housing options for incarcerated transwomen, whether they've had gender reassignment surgery or not.
In January 2020, San Quentin New published a newspaper article titled: SQ Transgender Day of Remembrance.
What appears on the surface to be a historical first program that recognizes the human value of transwomen, factually excluded the value of transmit, and moreover, the health, safety, and inhumane treatment of gay and bisexual inmates at San Quentin State Prison.
Yes, you just read that, just a few feet away from where this event was being held, Senator Scott Weiner said has still done ZERO about inmates that identify to some degree as LGBTQIA+ being beaten, spit on, and doused with human feces and urine in Housing Units Donner Section, Badger Section, and Alpine Section, and mistreatment in East Block.
[photo of several people holding up a "trans lives matter" banner, their eyes have all been crossed out with ink]
Participants hold up trans lives matter sign on Nov. 20 - Photo by Javier Jimenez, SQN
SQ Transgender Day of Remembrance
4 of 16 -- 7 [page ends]

8
[photo of Senator Wiener with two participants from the Transgender Day of Remembrance]
Calif. State Senator Scott Wiener, Lisa [crossed out] and Max [crossed out] after the event - Photo by Javier Jimenez, SQN
Demographic Profile
As you view in the photos in the news article, you will notice that Senator Wiener is taking a photo-op with LGBTQIA+ identifying inmates at San Quentin. what the readers do not know is that these inmates are dry, and not wet with spit, water feces, and urine because they are housed in units that CDCR have enforced for all inmates that sign an agreement with the Department to not forfeit said endorsement to SQSP by actively participating in gang or violent activities and behavior; these inmates lives are not in danger, especially not while in the company of a state senator.
Sen. Scott Wiener, his Policy Team, Amy Miller, Associate Director of CDCR, and her direct relationship to Billie Mizell - a vocational volunteer that heads Acting With Compassion and Truth Mainline Group, have systematically excluded, denied, and withheld resources within the Department to provide SQSP true First LGBTQIA+ Spirituality Group and Programming, because the founders are on Condemned Row, also partially housed in Donner Section, and with a volunteer
5 of 16 -- 9 [page ends]

10
base of, content donors, for The Sound Mind Streamer - which is the first LGBTQIA+ urban perspective in-cell televised broadcast that is accessible to the participation of all interested inmates, yet denied broadcasting. [arrow drawn to this paragraph with a checkbox]
Sen. Scott Weiner's bid to get his bill passed created a total systemic shutdown of all services provided by The Condemned LGBTQIA+ Spirituality Group spearheaded by the influence of Billie Mizell, who introduced herself to the Condemned Group as Chair of the Board at Death Penalty Focus Organization, yet, after most of the Condemned Group members have been on Death Row fro over 20 years, have never heard of Billie Mizell until a Jewish rabbi [underline:] invited her [/underline] to engage the Condemned LGTBQIA+ Spirituality Group, [underline:] as a guest. [/underline]
In May, the 26th of 2019, Billie Mizell told NBC News Reporter Kate Sosin that "CDCR allowed her to replicate her 'ACT' program on San Quentin's death row. with meetings on Tuesdays, and comprised of five people, and not open to reporters."
[photo of a woman with her eyes crossed out with pen]
ACT sponsor Billie Mizell - Photo by Terry Thornton
[written in the margin] It was later a question from Sgt. Frank had [underline:] Mizell "mispoken"? [/underline] We have a witness stating that Mizell "wanted to take over." [underline:] available by request [/underline] leave your email address to recieve
[arrows drawn toward the following link]
https://www.nbcnews.com/feature/nbc-out/san-quentin-lgbtq-prisoners-once-biased-inmates-try-heal-together-n1010026
[in margin] Excerpt
At San Quentin, LGBTQ prisoners and once-biased inmates try to heal together
The California prison's Act with Compassion & Truth group brings together LGBTQ inmates and some prisoners who've been convicted of extreme hate crimes
May 26, 2019, 4:44 PM GMT+2
By Kate Sosin
[written] Mizell's attempt to halt The Sound Mind Streamer Broadcast and take credit for The Condemned Group is not mistaken here. She misused their Freedom of Speech to disrespect the Process. [arrow drawn to next paragraph]
Working with several inmates, [underline:] Mizell brought a yearlong curriculum to the prison. [/underline] She has been leading the Acting With Compassion & Truth group as a volunteer at San Quentin ever since.
[underline:] This year, the California Department of Corrections and Rehabilitation allowed her to replicate the program on San Quentin's death row, which remains intact despite California Gov. Gavin Newsom's recent decision to halt executions. That group, comprised of five people, meets Tuesdays. It is not open to reporters.
6 of 16 -- 11 [page ends]