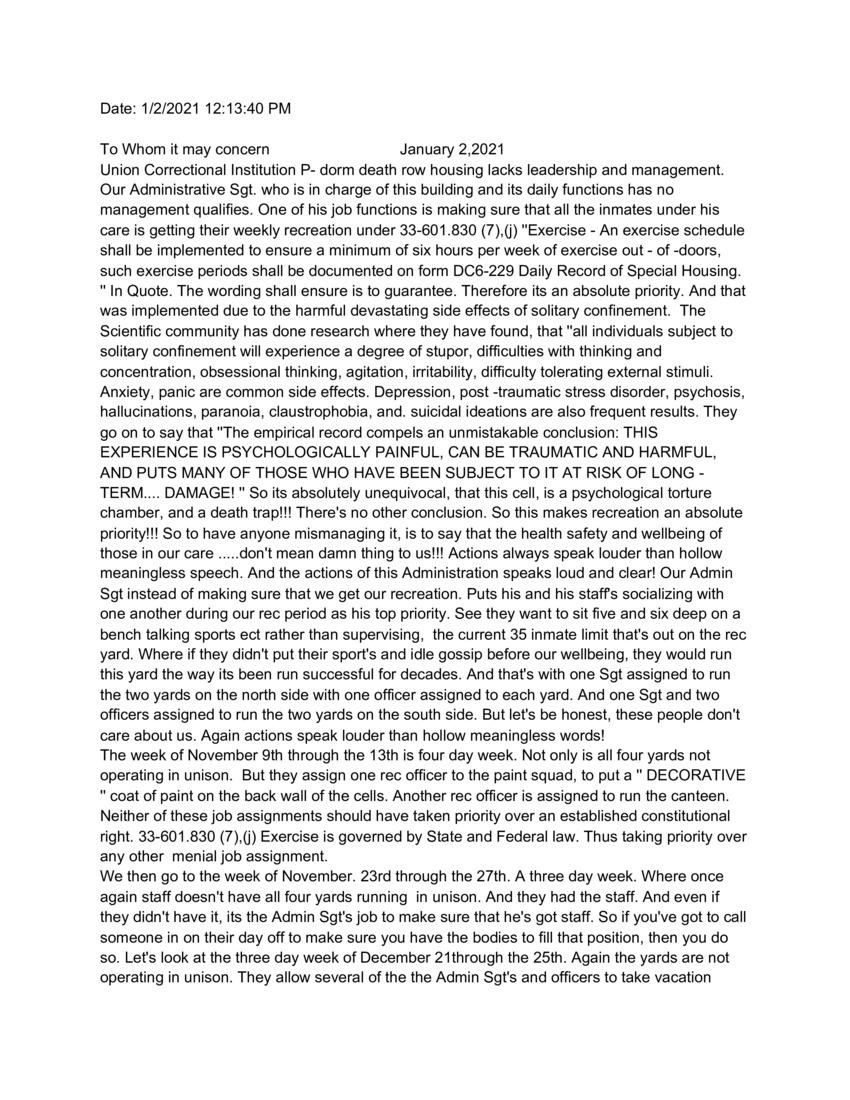 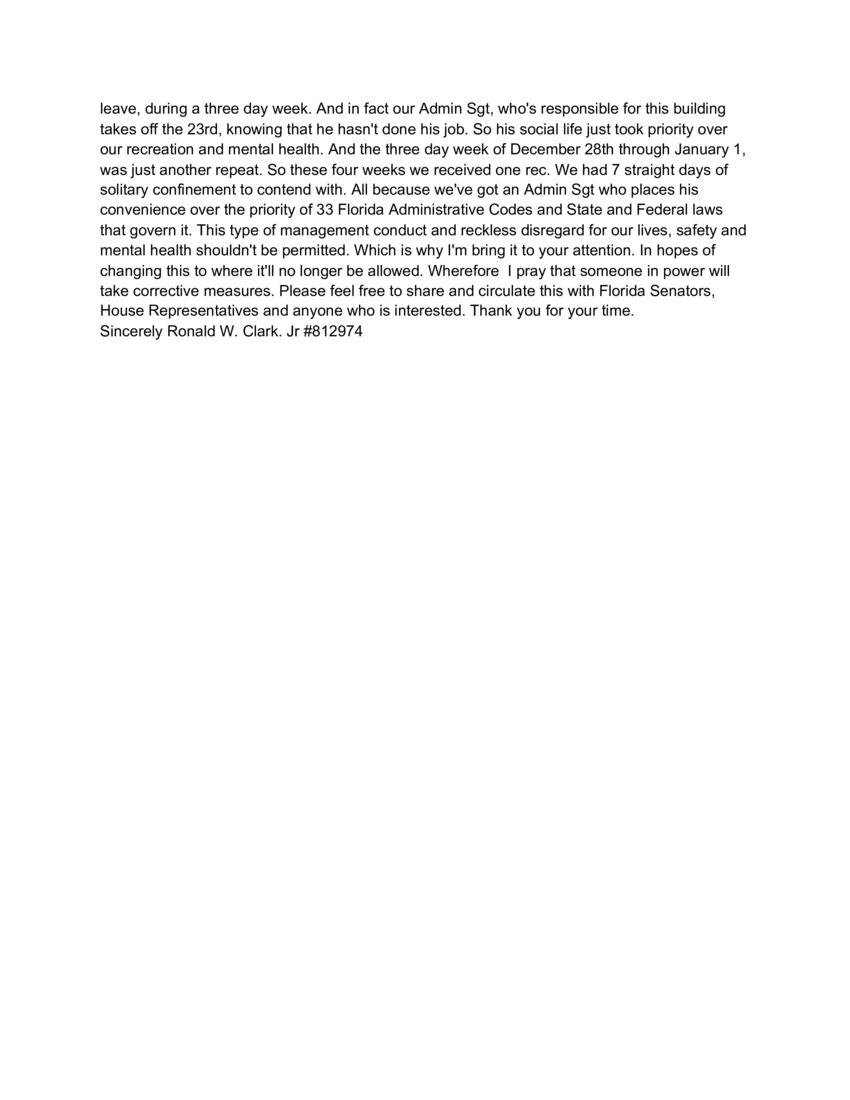 To Whom it may concern
Union Correctional Instituiton P-dorm death row housing lacks leadership and management. Our Administrative Sgt. who is in charge of this building and its daily functions has no management qualifies. One of his job functions is making sure that all the inmates under his care is getting their weekly recreation under 33-601.830 (7),(j) "Exercise - An exercise schedule shall be implemented to ensure a minimum of six hours per week of exercise out - of -doors, such exercise periods shall be documented on form DC6-229 Daily Record of Special Housing. " In Quote. The wording shall ensure is to guarantee. Therefore its an absolute priority. And that was implemented due to the harmful devastating side effects of solitary confinement. The Scientific community has done research where they have found, that "all individuals subject to solitary confinement will experience a degree of stupor, difficulties with thinking and concentration, obsessional thinking, agitation, irritability, difficulty tolerating external stimuli. Anxiety, panic are common side effects. Depression, post -traumatic stress disorder, psychosis, hallucinations, paranoia, claustrophobia, and suicidal ideations are also frequent results. They go on to say that "The empirical record compels an unmistakable conclusion: THIS EXPERIENCE IS PSYCHOLOGICALLY PAINFUL, CAN BE TRAUMATIC AND HARMFUL, AND PUTS MANY OF THOSE WHO HAVE BEEN SUBJECT TO IT AT RISK OF LONG - TERM... DAMAGE! "So its absolutely unequivocal, that this cell, is a psychological torture chamber, and a death trap!!! There's no other conclusion. So this makes recreation an absolute priority!!! So to have anyone mismanaging it, is to say that the health safety and wellbeing of those in our care .....don't mean damn thing to us!!! Actions always speak louder than hollow meaningless speech. And the actions of this Administration speaks loud and clear! Our Admin Sgt instead of making sure that we get our recreation. Puts his and his staff's socializing with one another during our rec period as his top priority. See they want to sit five and six deep on a bench talking sports etc rather than supervising, the current 35 inmate limit that's out on the rec yard. Where if they didn't put their sport's and idle gossip before our wellbeing, they would run this yard the way its been run successful for decades. And that's with one Sgt assigned to run the two yards on the north side with one officer assigned to each yard. ANd on Sgt and two officers assigned to run the two yards on the south side. But let's be honest, these people don't care about us. Again actions speak louder than hollow meaningless words!
The week of November 9th through the 13th is four day week. Not only is all four yards not operating in unison. But they assign one rec officer to the paint squad, to put a "DECORATIVE" coat of paint on the back wall of the cells. Another rec officer is assigned to run the canteen. Neither of these job assignments should have taken priority over an established constitutional right. 33-601.830 (7),(j) Exercise is governed by State and Federal law. Thus taking priority over any other menial job assignment.
We then go to the week of November. 23rd through the 27th. A three day week. Where once again staff. And even if they didn't have it, its the Admin Sgt's job to make sure that he's got staff. So if you've got to call someone in on their day off to make sure you have the bodies to fill that position, then you do so. Let's look at the three day week of December 21through the 25th. Again the yards are not operating in unison. They allow several of the Admin Sgt's and officers to take vacation leave, during a three day week. And in fact out Admin Sgt, who's responsible for this building takes off the 23rd, knowing that he hasn't done his job. So his social life just took priority over our recreation and mental health. And the three day week of December 28th through January 1, was just another repeat. So these four weeks we received one rec. We had 7 straight days of solitary confinement to contend with. All because we've got an Admin Sgt who places his convenience over the priority of 33 Florida Administrative Codes and State and Federal laws that govern it. This type of management conduct and reckless disregard for our lives, safety and mental health shouldn't be permitted. Which is why I'm bring it to your attention. In hopes of changing this to where it'll no longer be allowed. Wherefore I pray that someone in power will take corrective measures. Please feel free to share and circulate this with Florida Senators ,
Sincerely Ronald W. Clark. Jr #812974