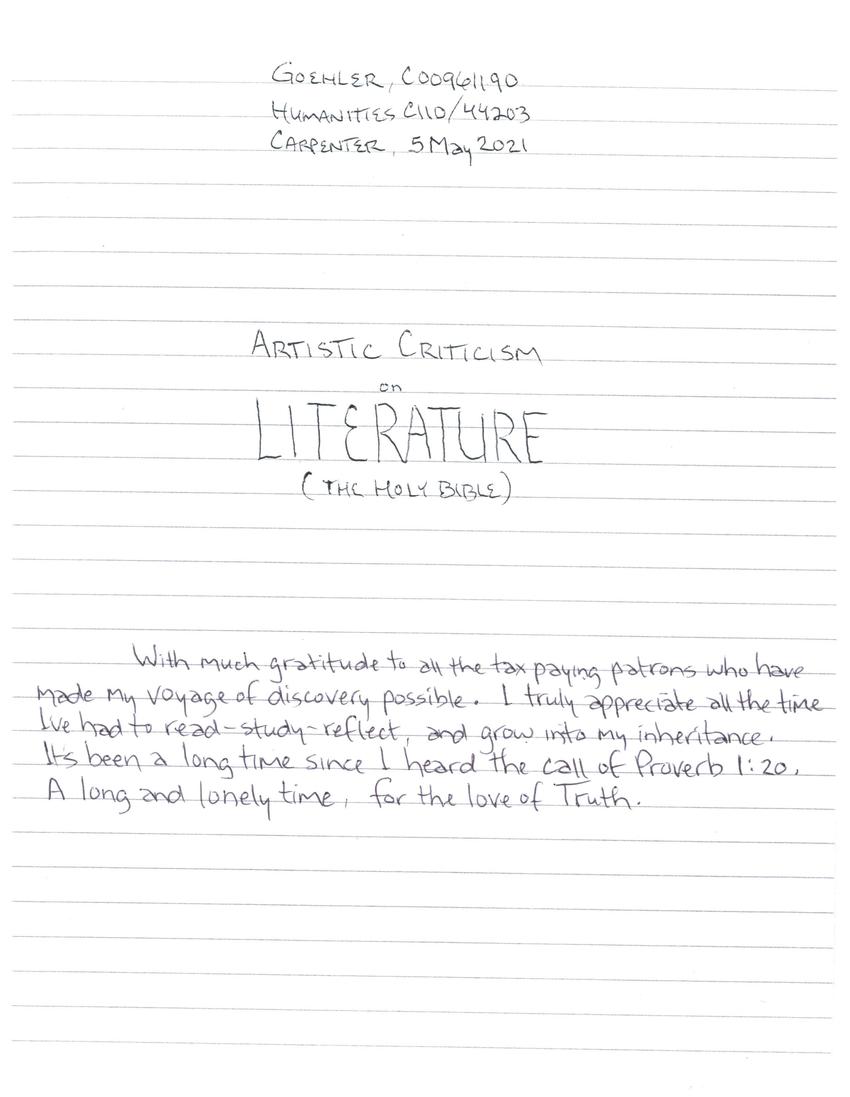 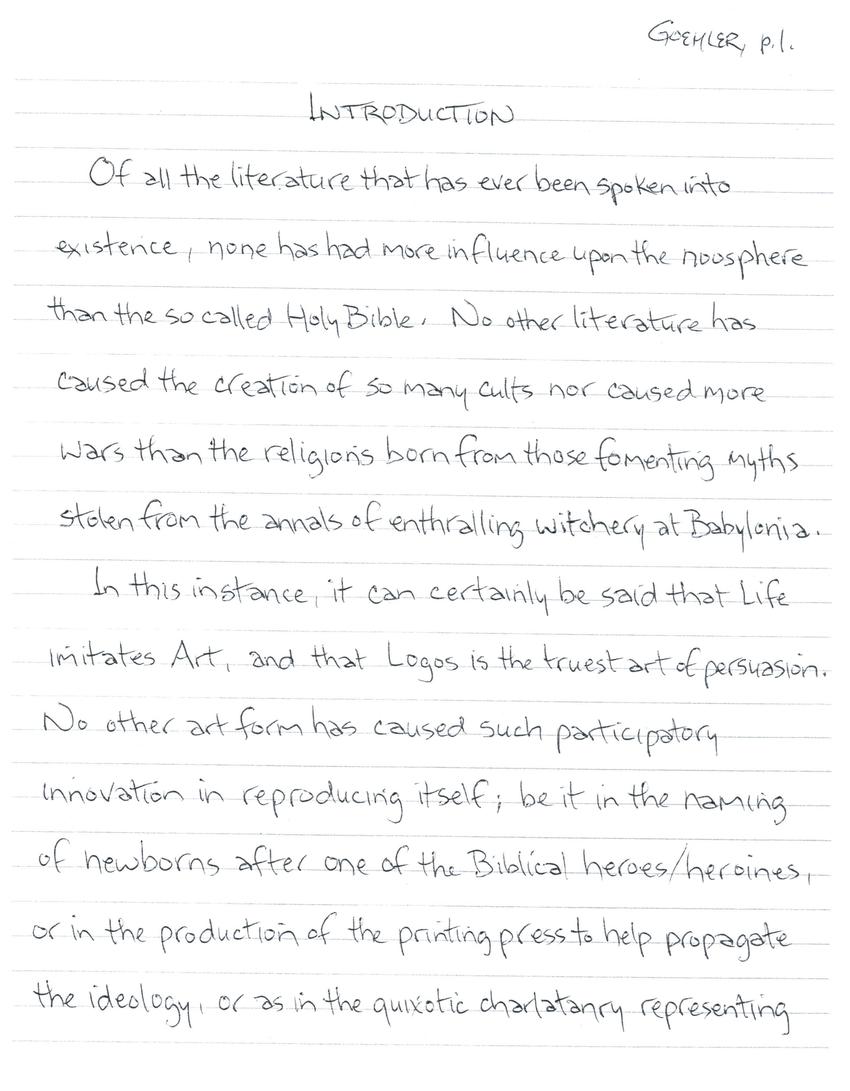 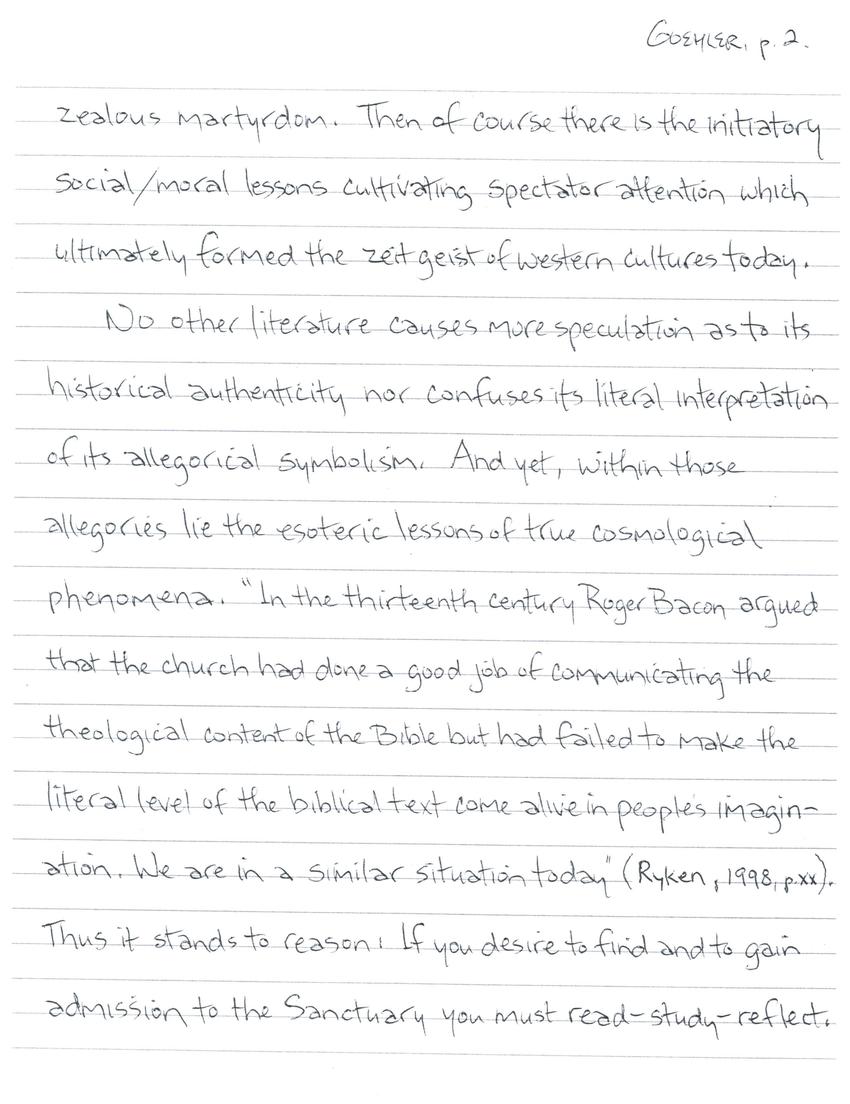 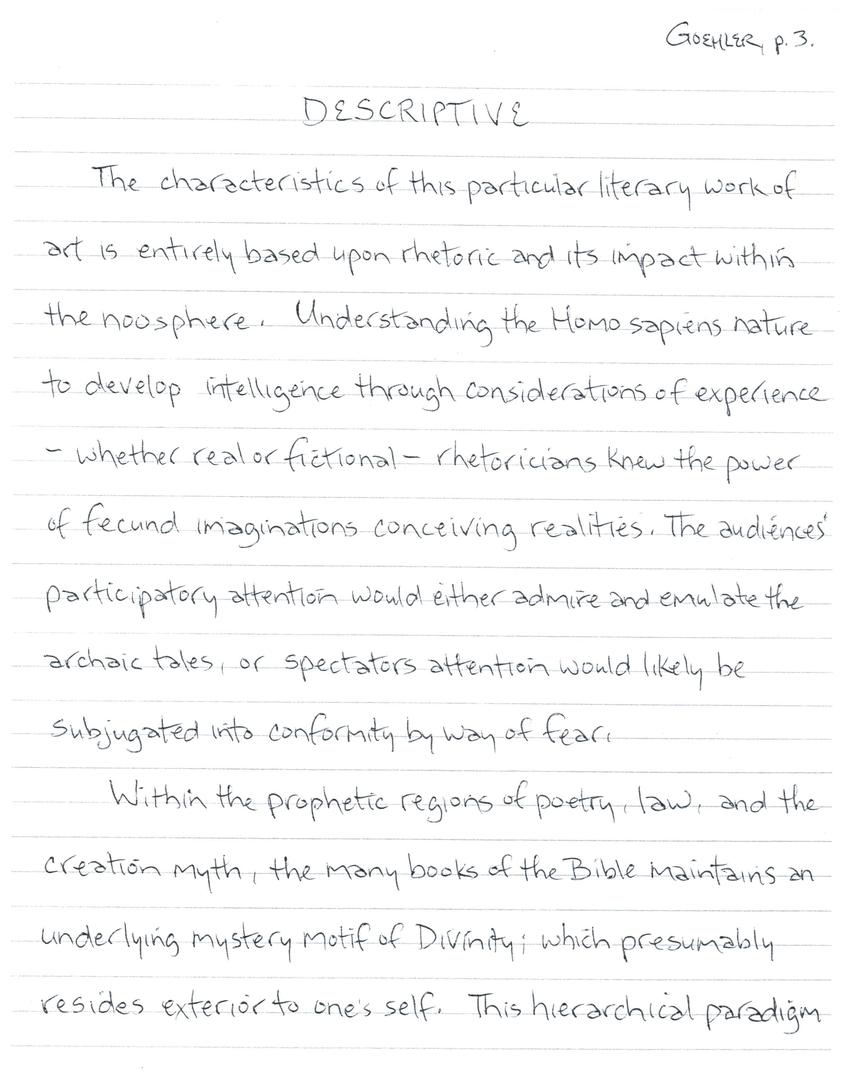 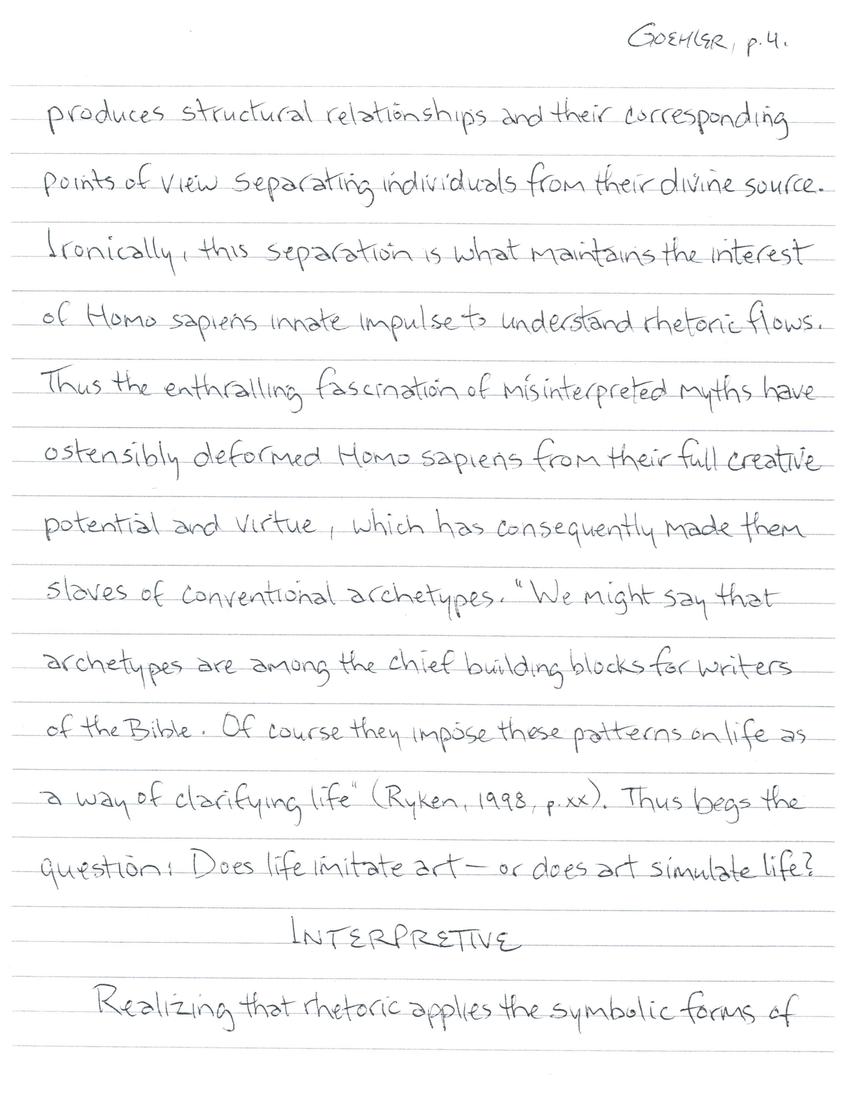 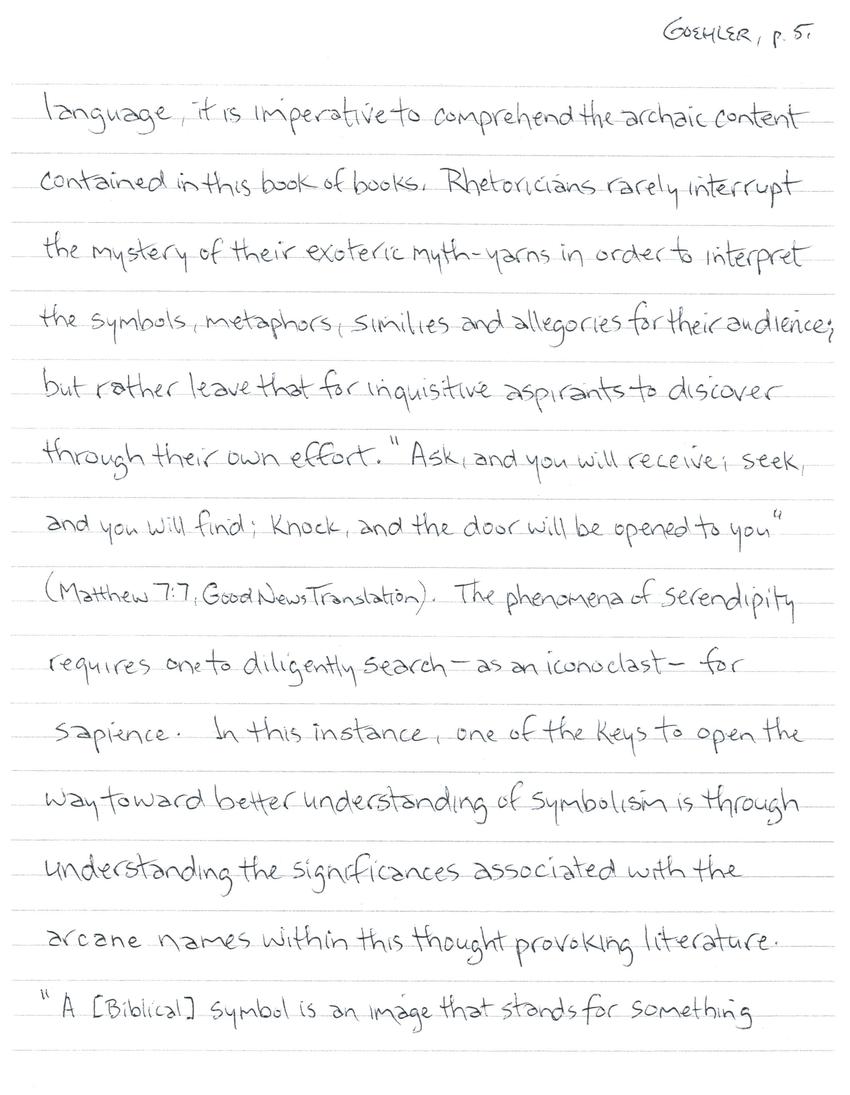 With much gratitude to all the tax paying patrons who have made my voyage of discovery possible. I truly appreciate all the time I've had to read-study-reflect, and grow into my inheritance. It's been a long time since I heard the call of Proverb 1:20. A long and lonely time, for the love of Truth.

Of all the literature that has ever been spoken into existence, none has had more influence upon the noosphere than the so called Holy Bible. No other literature has caused the creation of so many cults nor caused more ward than the religions born from those fomenting myths from the annals of enthralling witchery at Babylonia.

In this instance, it can certainly be said that Life imitates Art, and that Logos is the truest art of persuasion. No other art form has caused such participatory innovation in reproducing itself; be it in the naming of newborns after one of the Biblical heroes/heroines, or in the production of the printing press to help propagate the ideology, or as in the quixotic charlatanry representing zealous martyrdom. Then of course there is the initiatory social/moral lessons cultivating spectator attention which ultimately formed the zeitgeist of western cultures today.

No other literature causes more speculation as to its historical authenticity nor confuses its literal interpretation of its allegorical symbolism. And yet, within those allegories lie the esoteric lessons of true cosmological phenomena. "In the thirteenth century Roger Bacon argued that the church had done a good job of communicating the theological content of the Bible but had failed to make the literal level of the biblical text come alive in people's imagination. We are in a similar situation today." (Ryken, 1998, p. XX). Thus it stands to reason: If you desire to find and to gain admission to the Sanctuary you must read-study-reflect.

The characteristics of this particular literary work of art is entirely based upon rhetoric and its impact within the noosphere. Understanding the Homo sapiens' nature to develop intelligence through considerations of experience - whether real or fictional - rhetoricians knew the power of fecund imaginations conceiving realities. The audiences' participatory attention would either admire and emulate the archaic tales, or spectators' attention would likely be subjugated into conformity by way of fear.

Within the prophetic regions of poetry, law, and the creation myth, the many books of the Bible maintain an underlying mystery motif of Divinity; which presumably resides exterior to one's self. This hierarchical paradigm produces structural relationships and their corresponding points of view separating individuals from their divine source. Ironically, this separation is what maintains the interest of Homo sapiens' innate impulse to understand rhetoric flows. Thus the enthralling fascination of misinterpreted myths have ostensibly deformed Homo sapiens from their full creative potential and virtue, which has consequently made them slaves of conventional archetypes. "We might say that archetypes are among the chief building blocks for writers of the Bible. Of course they impose these patterns on life as a way of clarifying life." (Ryken, 1998, p. XX). Thus begs the question: Does life imitate art - or does art simulate life?

Realizing that rhetoric applies the symbolic forms of language, it is imperative to comprehend the archaic content contained this book of books. Rhetoricians rarely interrupt the mystery of their exoteric myth-yarns in order to interpret the symbols, metaphors, similes and allegories for their audience; but rather leave that for inquisitive aspirants to discover through their own effort. "Ask, and you will receive; seek, and you will find; knock, and the door will be opened to you." (Matthew 7:7, Good News Translation). The phenomena of serendipity requires one to diligently search - as an iconoclast - for sapience. In this instance, one of the keys to pen the way toward better understanding of symbolism is through understanding of symbolism is through understanding the significances associated with the arcane names within this thought provoking literature. "A [Biblical] symbol is an image that stands for something [more occult] in addition to its literal meaning." (Ryken, 1998, p. XIV). There are also biblical analogies which require participatory attention to adequately associate potential differences and/or similarities of significances in order to arrive at richer understandings. Images insist on interpretation and to leave biblical allusions uninterpreted is a literal sin.

For instance, the proverbial "mark of Cain" (Genesis 4:15), is intended as a "sign" (Strong's #226 - "a signal"), a symbol of something distinct; similar in affect as the proverbial "mark" of the beast (Revelation 19:20), which is interpreted as "a stamp - as a badge of servitude" (Strong's #5840). Yet further interpreted by the etymologically greek derivation "Charagma", meaning: "a scratch or etching, i.e. stamp...", it becomes obvious that these allegorical mark(s) distinguish "character". This is further supported by the arcane name of Cain's son Enoch and the name of the first recorded civilized city (Genesis 4:17) of Homo-sapiens. The name "Enoch" is interpreted as "initiated or disciplined, train up" (Strong's #2585).

It is evident that the intended significance within the Bible's arcanum is concealed within the "name(s)" which designate "an appellation, as a mark or memorial of individuality, character" (Strong's #8034). Thus the proverbial name of "Cain" for instance, is defined as "a lance - as striking fast" (Strong's #7014) -- suggesting survival of the fittest -- when one considers the context of the myth concerning Cain slaying his brother "Abel" (Genesis 4:8), whose name distinguishes him as being "something transitory and unsatisfactory" (Strong's #1892). Amongst other interpretations in the Dictionary of Symbols (Penguin Reference) the arcane name Lance is synonymous with "spear", which is interpreted thus:

... A custom in the Greco-Roman world, in which, as we know, the spear was one of the attributes of Athene (Minerva), shows how much all elements affecting the libido may be both honoured and restrained or controlled. Officers or ordinary soldiers who had performed some outstanding deed of bravery were rewarded with a spear. This spear was, however, usually blunt, not simply because it was awarded as an honour, but because it conferred no position of authority in either civil or military affairs. For the strength which the spear expresses, and this evidence of it, had to be that of public authority overriding that of the private individual. This is why the spear had a symbolic place in all things deriving from the law, protecting contracts, and the legal process as a whole.

As such, it appears the name Cain means more than simply survival of the fittest, but rather denotes the implicit responsibility of Noblesse Oblige to govern zones of influence; by use of both force and intelligence apparently depending upon who is being disciplined to conform to social norms. To be true, just, and upright is the basis of all virtue and excellence, without which neither of these can exist.

The investigation into the meaning of words is the beginning of education. Ezra Pound once said "great literature is simply language charged with meaning to the utmost degree". (Martin, 1975, p. 187). I must admit that being trained up in the patriarchal Christian culture placed a lot of weight upon my shoulders which I naturally resented and rebelled against since I was unable to discern the purpose behind the cretin indoctrination. Incidentally, the arcane name of "Mary", whose pureness immaculately conceived eternal salvation (i.e. Yatt-Oshua), derives from "Mariam", which is interpreted as "rebellion, bitter, or rebellious" (Strong's #4805). Fortunately, I was able to discover enough meaning within the arcanum I had access to for me to finally understand the perfection in the never ending story of me, revealed in the archetypes of the Bible.

The Holy Bible is the ultimate demonstration of true serial art in that the cohesion of Divine motif throughout its many books provides the subject matter within its artistic form where everything works in concert to influence the Homo-sapiens' mind toward higher thinking. Someone said that "noble thoughts inspire noble deeds". This is evident in the Bible's influence upon spectator attention prompting participatory attention in the form of devotion, which is the prerequisite to illumination (i.e. Let there be Light), and ever increasing participation toward yet greater insights. "Participation is the way - the only way - of getting into direct contact with the form-content" (Martin, 1975, p. 50). The arcana of the Ancient Mysteries were never revealed to the profane except through the media of symbols. Knowledge of the esoteric meaning requires an iconoclast to cut through that meaning to find another, and under that if you dig deep enough you may find a third, a fourth, who shall say how many teachings? "A symbol is a sensible image used to express an occult but analogical signification. Analogy is the guiding law in nature, the only true Ariadne's thread that can lead us through the inextricable paths toward the primal and final mysteries" (Biavatsky, 1888).

From the cradle of civilization, Babylonia was the center of literary culture. It's no wonder that our patriarchal societies have been enculturated to emulate the slave mentality imposed by the thieving scribes who made themselves the cultural elite - "God's chosen" - circumcising the minds and prepuce of humanity! Of all the myths ever told, Western civilization's world view happened to be centered in a monotheistic British Milah (Genesis 17), supplanting nature with arbitrary enslavement of body and mind for ever after.

Yet, this literary masterpiece contains the answers to the riddles therein, preserved for heroes and heroines who would dare think themselves worthy of initiation - and corresponding responsibility - to govern their zone of influence in the cause of human progress.