Not Ok To Ask For Help 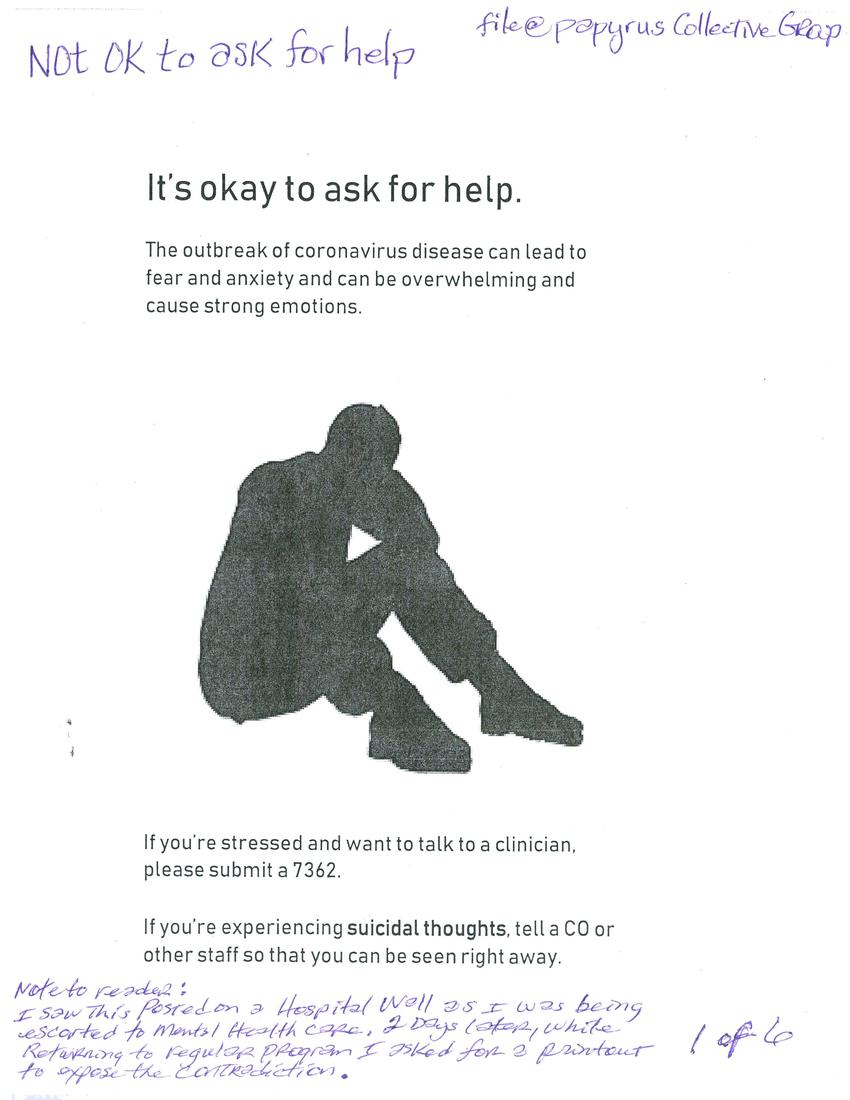 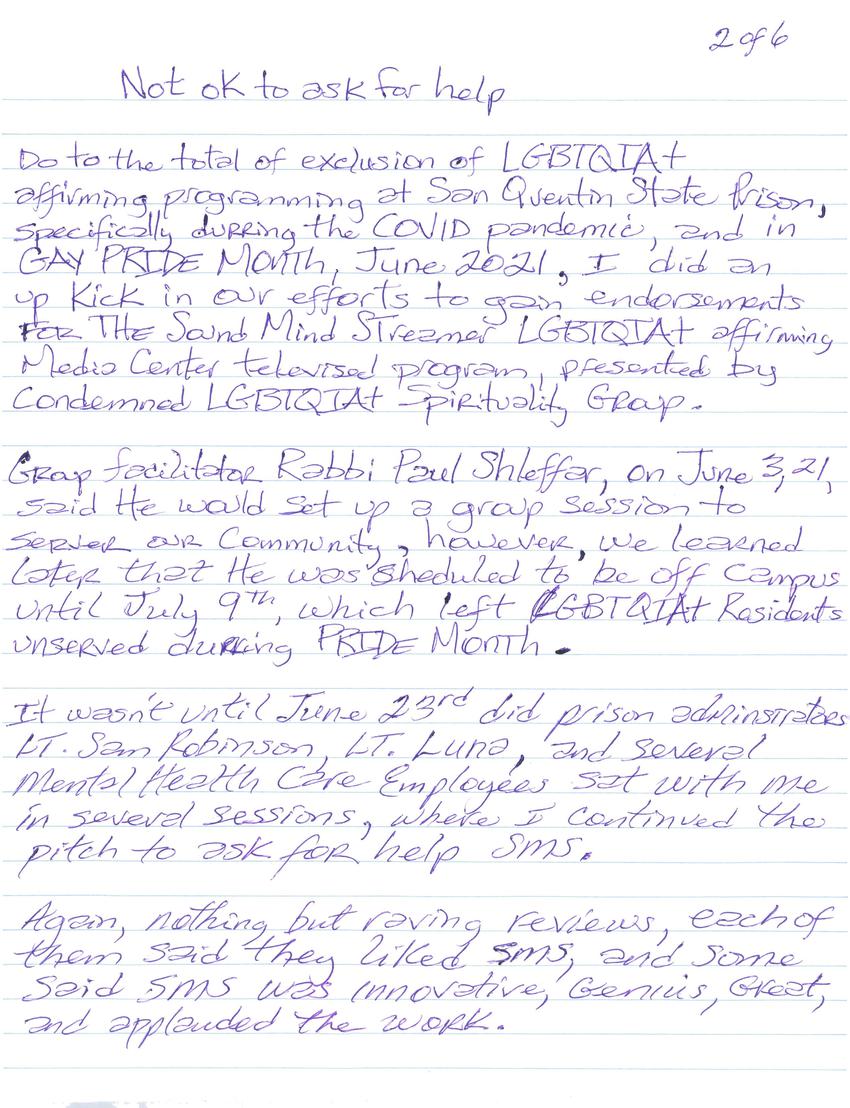 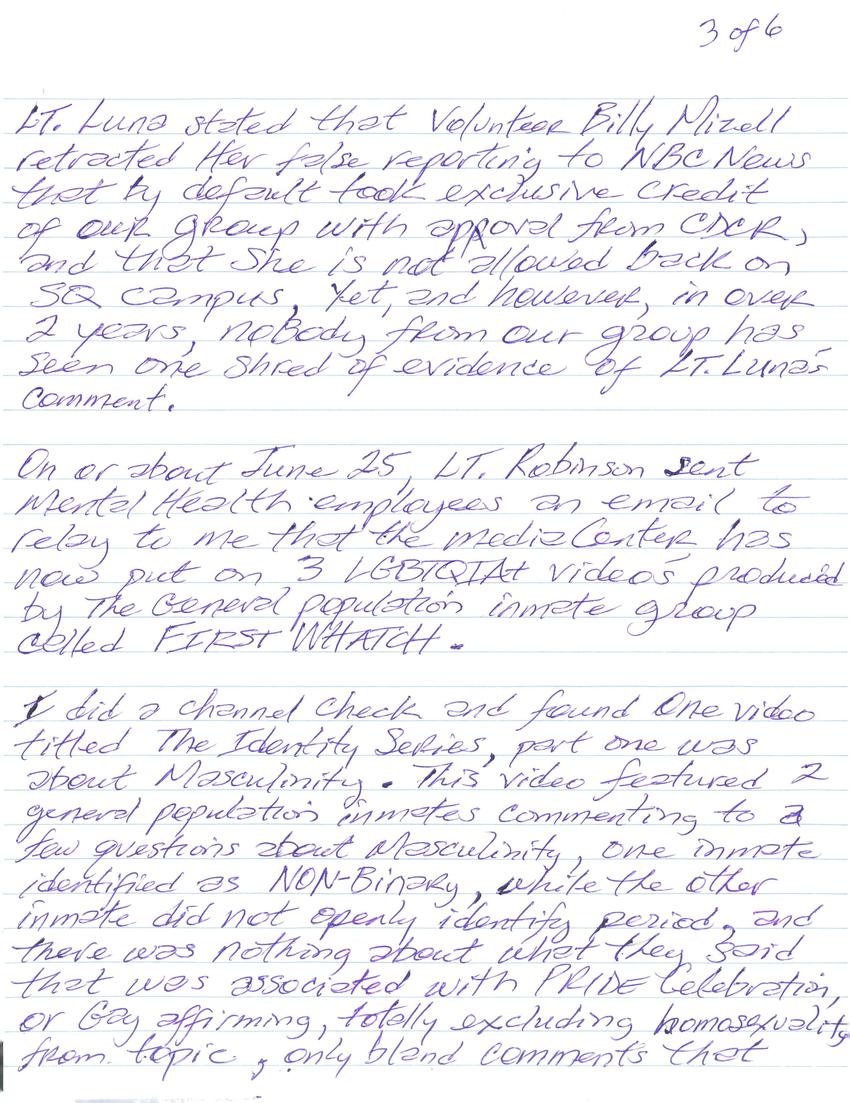 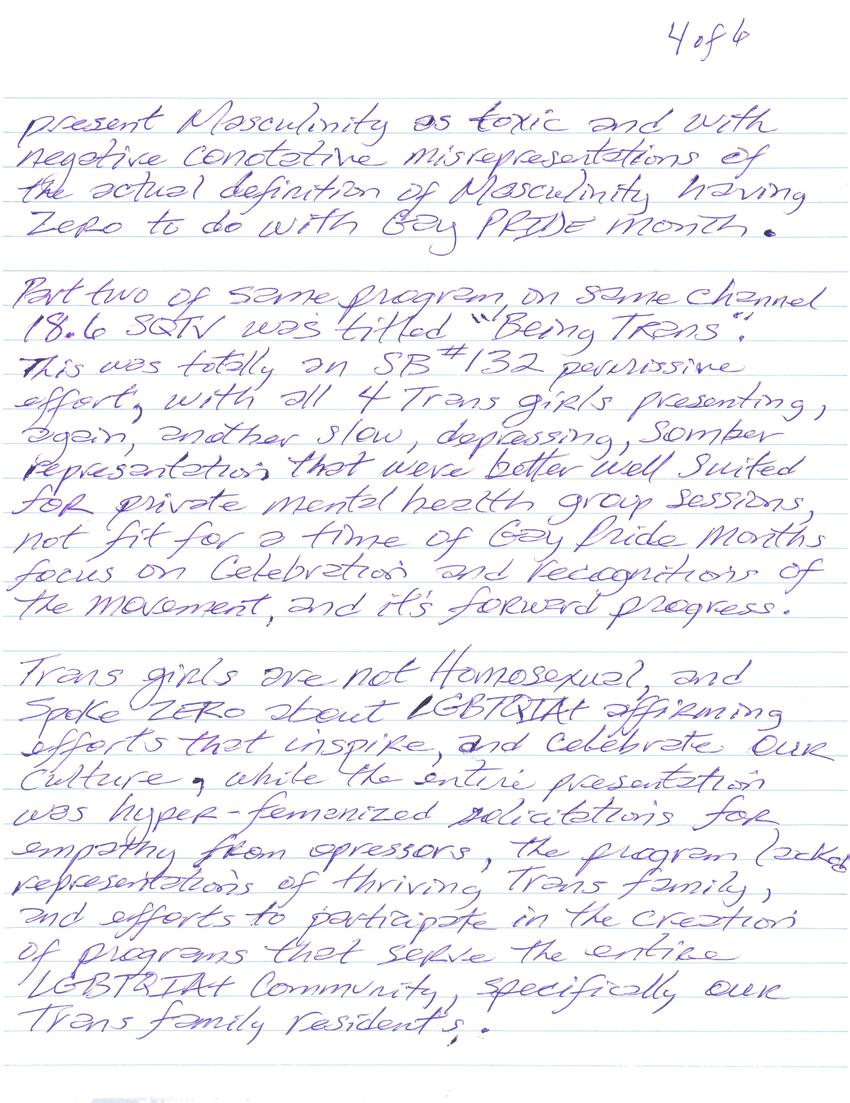 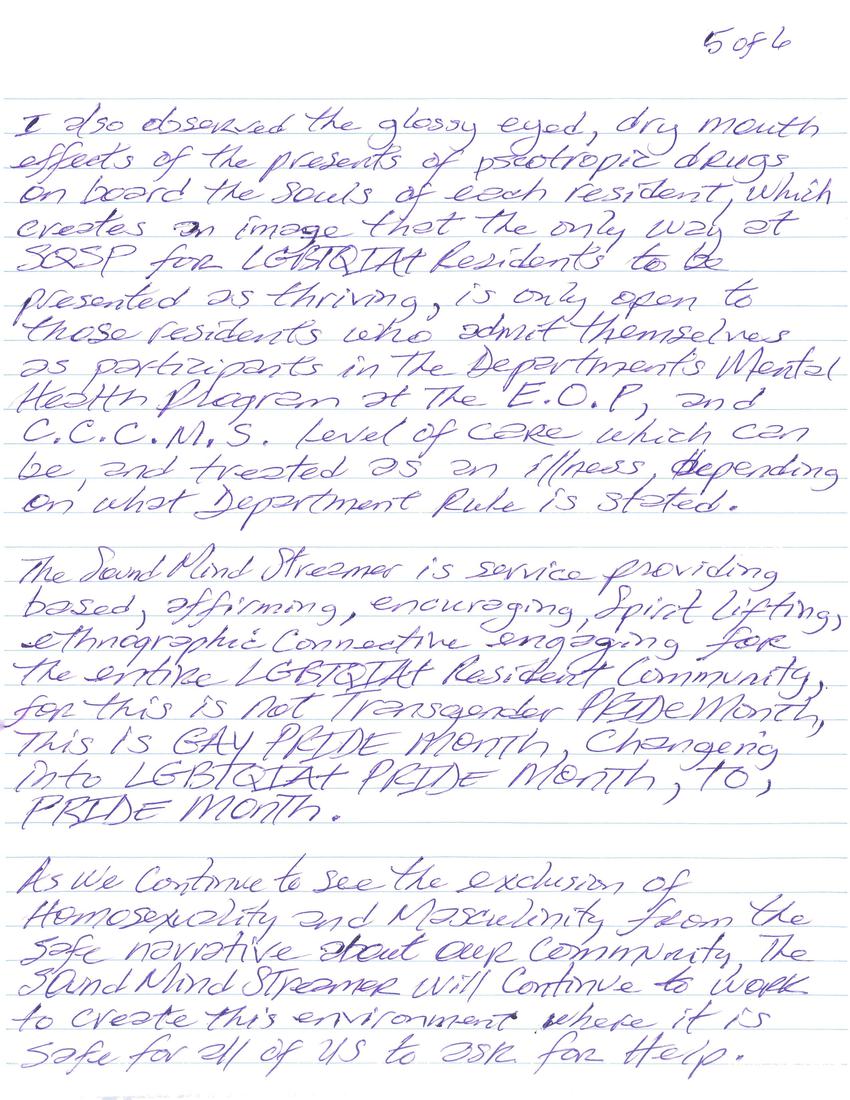 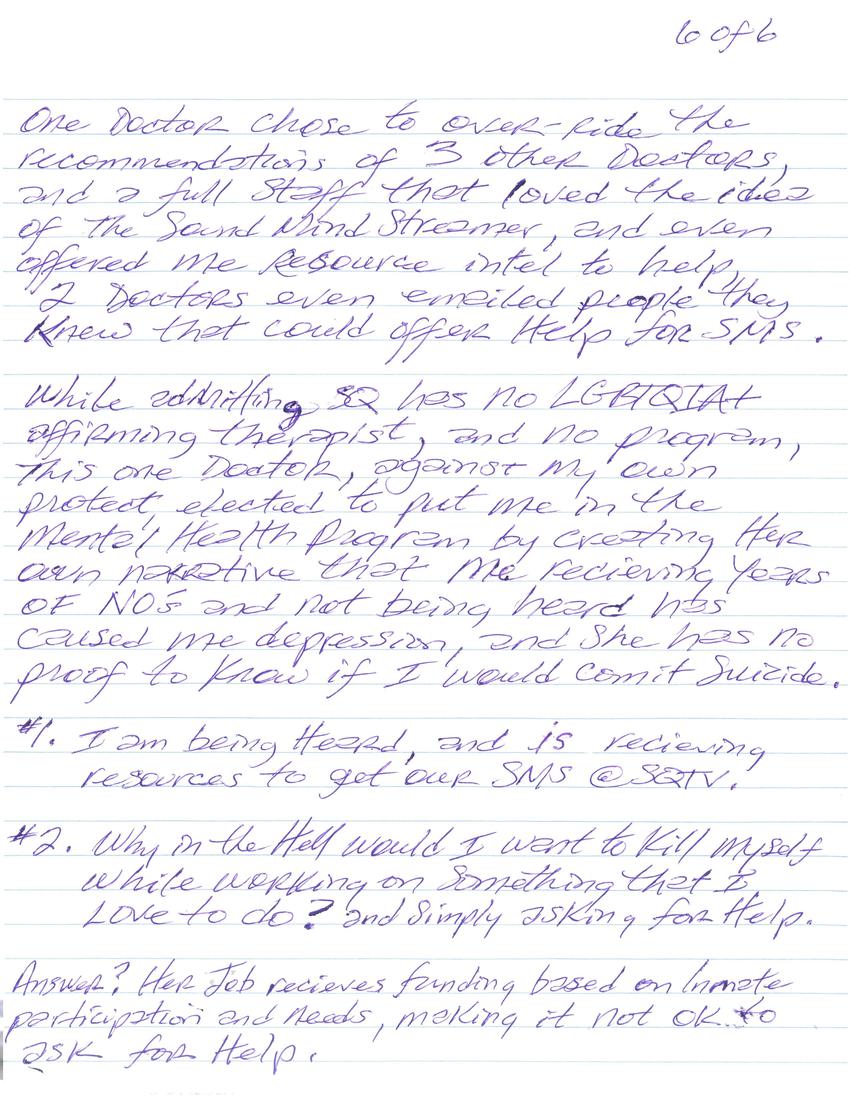 Note to reader:
I saw This Posted on a Hospital well as I was being escorted to Mental Health Care. 2 Days later, while Returning to the regular Program I asked for 2 printouts to expose the Contradiction.

-Not ok to ask for help (PG 2 of 6)-
Do to the total of exclusion of LGTQIA+ affirming programming at San Quentin State Prison, specifically during the COVID pandemic, and in GAY PRIDE MONTH, JUNE 2021, I did an up KICK in our efforts to gain endorsements For The Sound Mind Streamer LGBTQIA+ affirming Media Center televised program, presented by Condemned LGBTQIA+ Spirituality Group.

Group facilitator Rabbi Paul Shleffar, on June 3, 21, said He would set up a group session to served our community, however, we learned later that he was scheduled to be off-campus until July 9th which left LGBTQIA+ Residents unserved during PRIDE MONTH.

It wasn't until June 23rd did prison administrators Lt. Sam Robinson Lt. Luna, and several Mental Health Care Employees sat with me in several sessions, where I continued the pitch to ask for help SMS.

Again, nothing but raving reviews, each of them said they liked SMS, and some said SMS was innovative, genius, greet, and applauded the work.

-Do Not ask for Help (PG 3 of 6)-
LT. Luna stated that Volunteer Billy Mizell retracted her false reporting to NBC News that by default took exclusive credit of our group with approval from CDCR, and that she is not allowed back on SQ campus. Yet, and however, in over 2 years, nobody from our group has seen one shred of evidence of LT.Luna's comment.

On or about June 25, LT. Robinson sent Mental Health employees an email to relay to me that the Media Center has now put on 3 LGBTQIA+ videos produced by The General population inmate group called FIRST WHATCH.

I did a channel check and found One video titled The Identity Series, part one was about Masculinity. This video featured 2 general population inmates commenting to a few questions about Masculinity, one inmate identified as NoN-Binary, while the other inmate did not openly identify period, and there was nothing about what they said that was associated with PRIDE Celebration, or Gay affirming, totally excluding homosexuality from a topic, only bland comments that

present Masculinity as toxic and with negative connotative misrepresentation of the actual definition of Masculinity having Zero to do with GAY PRIDE MONTH.

Part two of the same program on same channel 18.6 SQTV was titled "Being Trans". this was totally an SB #132 permissive effort, with all 4 Trans girls presenting, again, another slow, depressing, somber representation that was better well suited for private mental health group sessions not fit for a time of Gay Pride Month's focus on celebration and recognition of the movement, and its forward progress.

Trans girls are not Homosexual and spoke ZERO about LGBTQIA+ affirming efforts that inspire, and celebrate our culture, while the entire presentation was hyper-feminized salvation(maybe wrong) for empathy from oppressors, The program lacked representation's of thriving Trans family, and efforts to participate in the creation of programs that serve the entire LGBTQIA+ Community specifically our Trans family resident's.