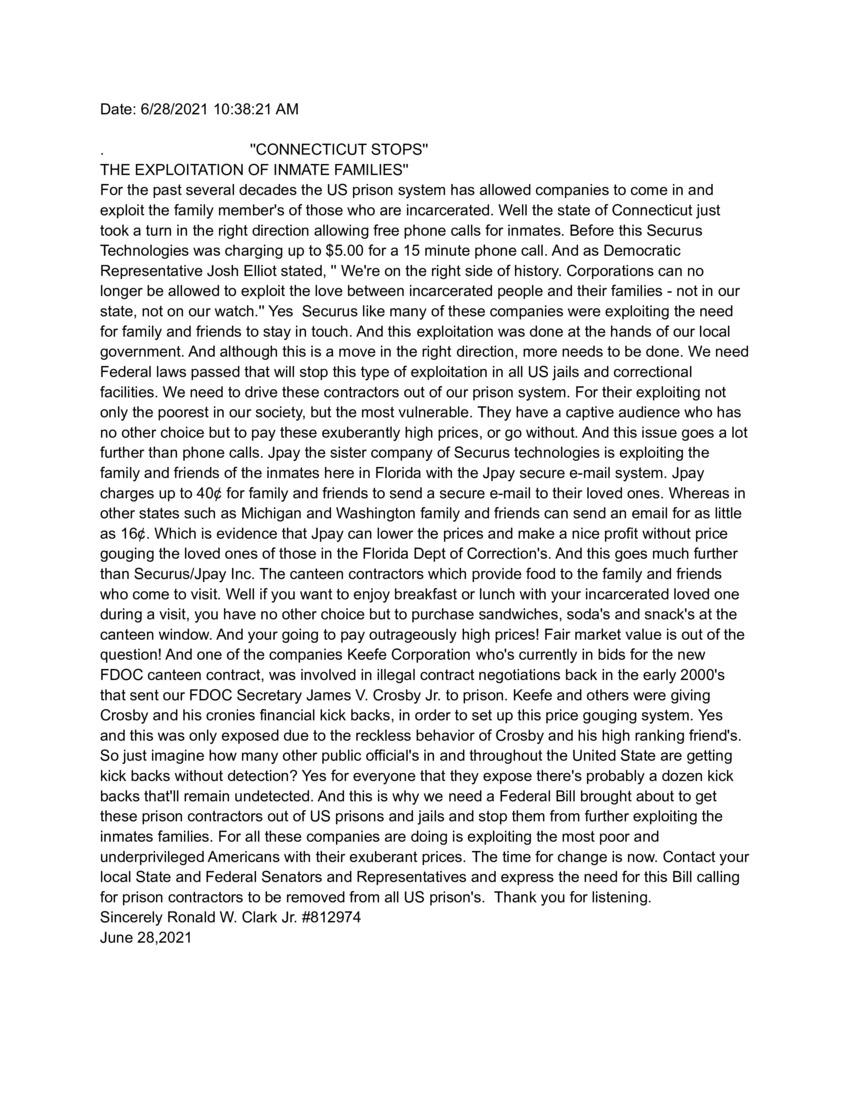 THE EXPLOITATION OF INMATE FAMILIES

For the past several decades the US prison system has allowed companies to come in and exploit the family members of those who are incarcerated. Well the state of Connecticut just took a turn in the right direction allowing free phone calls for inmates. Before this Securus Technologies was charging up to $5.00 for a 15 minute phone call. And as Democratic Representative Josh Elliot stated, "We're on the right side of history. Corporations can do longer be allowed to exploit the love between incarcerated people and their families - not in our state, not on our watch." Yes Securus like many of these companies were exploiting the need for family and friends to stay in touch. And this exploitation was done at the hands of our local government. And although this is a move in the right direction, more needs to be done. We need federal laws passed that will stop this type of exploitation in all US jails and correctional facilities. We need to drive these contractors out of our prison system. For they're exploiting not only the poorest in our society, but the most vulnerable. They have a captive audience who has no other choice but to pay these exuberantly high prices, or go without. And this issue goes a lot further than phone calls. Jpay the sister company of Securus technologies is exploiting the family and friends of the inmates here in Florida with the Jpay secure e-mail system. Jpay charges up to 40 cents for family and friends to send a secure e-mail to their loved ones. Whereas in other states such as Michigan and Washington family and friends who come to visit. Well if you want to enjoy breakfast or lunch with your incarcerated loved one during a visit, you have no other choice but to purchase sandwiches, sodas and snacks at the canteen window. And you're going to pay outrageously high prices! Fair market value is out of the question! And you're going to pay outrageously high prices! Fair market value is out of the question! And one of the companies, Keefe Corporation, who's currently in bids for the FDOC canteen contract, was involved in illegal contract negotiations back in the early 2000s that sent our FDOC Secretary James V. Crosby Jr. to prison. Keefe and others were giving Crosby and his cronies financial kick backs, in order to set up this price gouging system. Yes, and this was only exposed due to the reckless behavior of Crosby and his high ranking friends. So just imagine how many other public officials in and throughout the United States are getting kickbacks without detection? Yes, for everyone that they expose there's probably a dozen kickbacks that'll remain undetected. And this is why we need a federal bill brought about to get these prison contractors out of US prisons and jails and stop them from further exploiting the inmate families. For all these companies are doing is exploiting the most poor and underprivileged Americans with their exuberant prices. The time for change is now. Contact your for prison contractors to be removed from all US prisons. Thank you for listening.