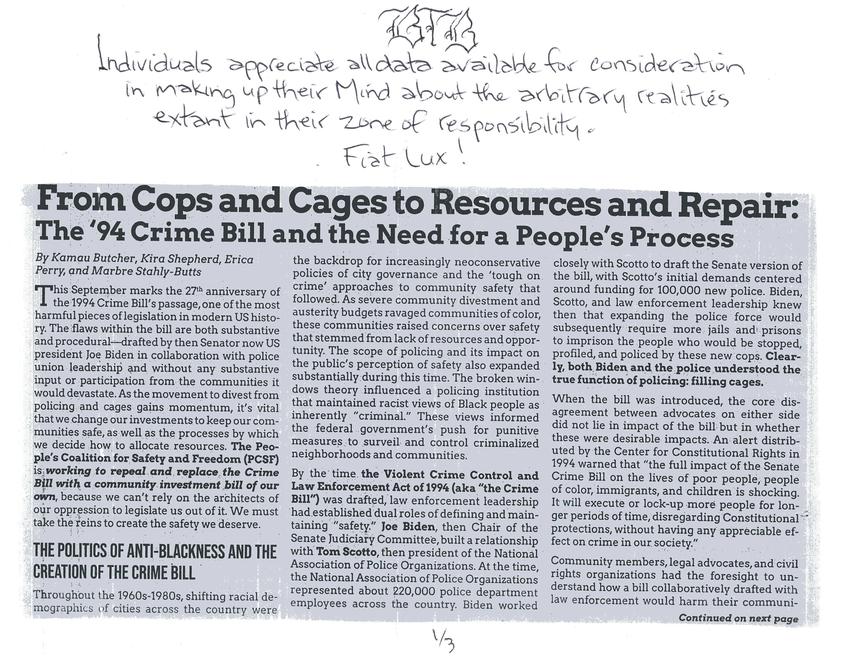 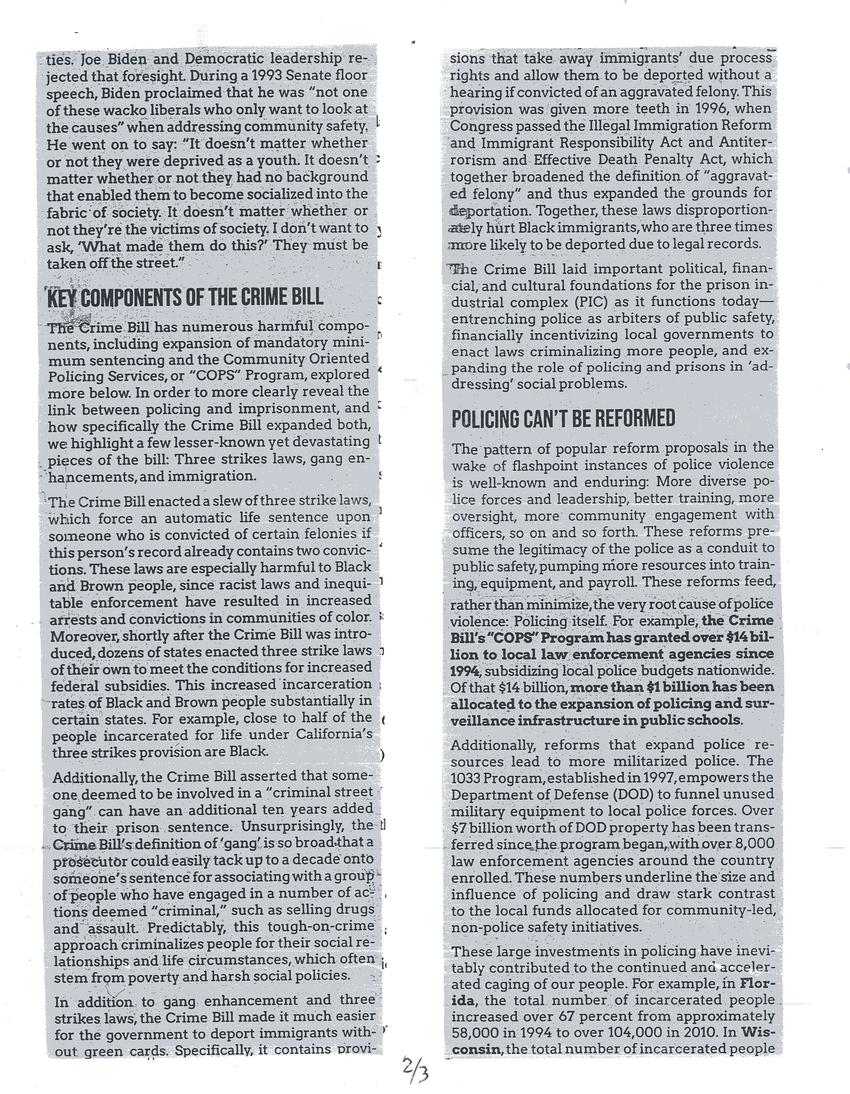 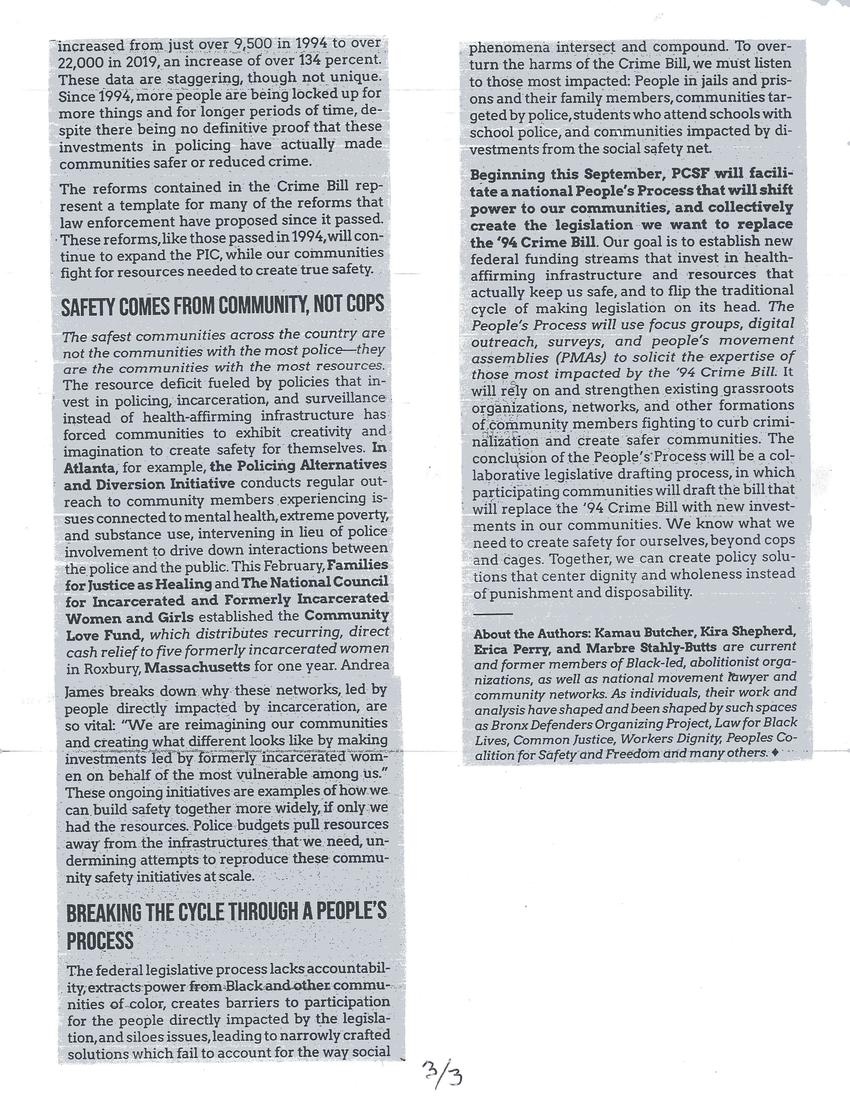 Individuals appreciate all data available for consideration in making up their Mind about the arbitrary realities extant in their zone of responsiblity.
Fiat lux!

From Cops and Cages to Resources and Repair:
The '94 Crime Bull and the Need for a People's Process

This September marks the 27th anniversary of the 1994 Crime Bill's passage, one of the most harmful pieces of legislation in modern US history. The flaws within the bill are both substantive and procedural - drafted by then Senator now US president Joe Biden in collaboration with police union leadership and without any substantive input or participation from the communities it would devastate. As the movement to divest from policing and cages gains momentum, it's vital that can change our investments to keep our communities safe, as well as the processes by which we decide to allocate resources. The People's Coalition for Safety and Freedom (PCSF) is working to repeal and replace the Crime Bill with a community investment bill of our own, because we can't rely on the architects of our oppression to legislate us out of it. We must take the reins to create the safety we deserve.

THE POLITICS OF ANTI-BLACKNESS AND THE CREATION OF THE CRIME BILL
Throughout the 1960s-1980s, shifting racial demographics of cities across the country were the backdrop for increasingly neoconservative policies of city governance and the 'tough on crime' approaches to community safety that followed. As severe community divestment and austerity budgets ravaged communities of color, these communities raised concerns over safety that stemmed from lack of resources and opportunity. The scope of policing and its impact on the public's perception of safety also expanded substantially during this time. The broken windows theory influenced a policing institution that maintained racist views of Black people as inherently "criminal." These views informed the federal government's push for punitive measures to surveil and control criminalized neighborhoods and communities.

By the time the Violent Crime Control and Law Enforcement Act of 1994 (aka "the Crime Bill") was drafted, law enforcement leadership had established dual roles of defining and maintaining "safety." Joe Biden, then Chair of the Senate Judiciary Committee, built a relationship with Tom Scotto, then president of the National Association of Police Organizations. At the time, the National Association of Police Organizations presented about 220,000 police department employees across the country. Biden worked closely with Scotto to draft the Senate version of the bill, with Scotto's initial demands centered around funding for 100,000 new police. Biden, Scotto, and law enforcement leadership knew then that expanding the police force would subsequently require more more jails and prisons to imprison the people who would be stopped, profiled, and policed by these new cops. Clearly, both Biden and the police understood the true function of policing: filling cages.

When the bill was introduced, the core disagreement between advocates on either side did not lie in impact of the bill but in whether these were desirable impacts. An alert distributed by the Center for Constitutional Rights in 1994 warned that "the full impact of the Senate Crime Bill on the lives of poor people, people of color, immigrants, and children is shocking. It will execute or lock-up more people for longer periods of time, disregarding Constitutional protections, without having any appreciable effect on crime in our society."

Community members, legal advocates, and civil rights organizations had the foresight to understand ow a bill collaboratively drafted with law enforcement would harm their communities.

Continued on next page

Joe Biden and Democratic leadership rejected that foresight. During a 1993 Senate floor speech, Biden proclaimed that he was "not one of these wacko liberals who only want to look at the causes