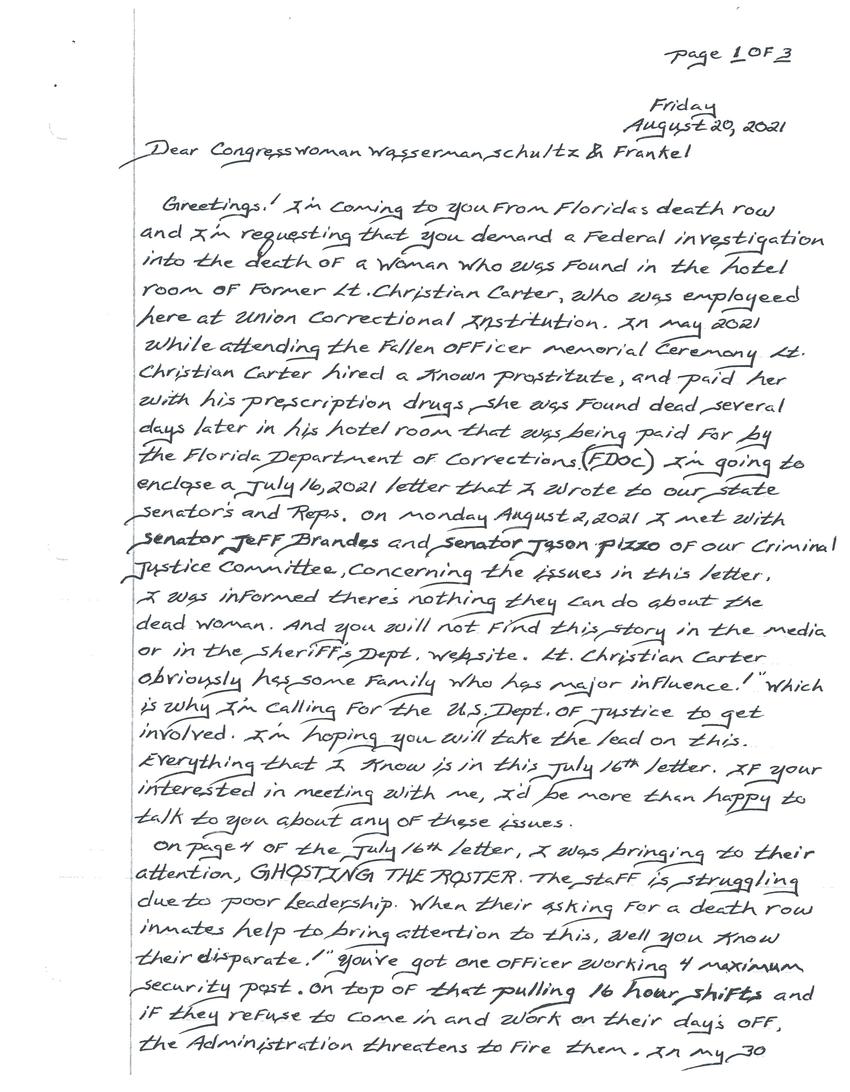 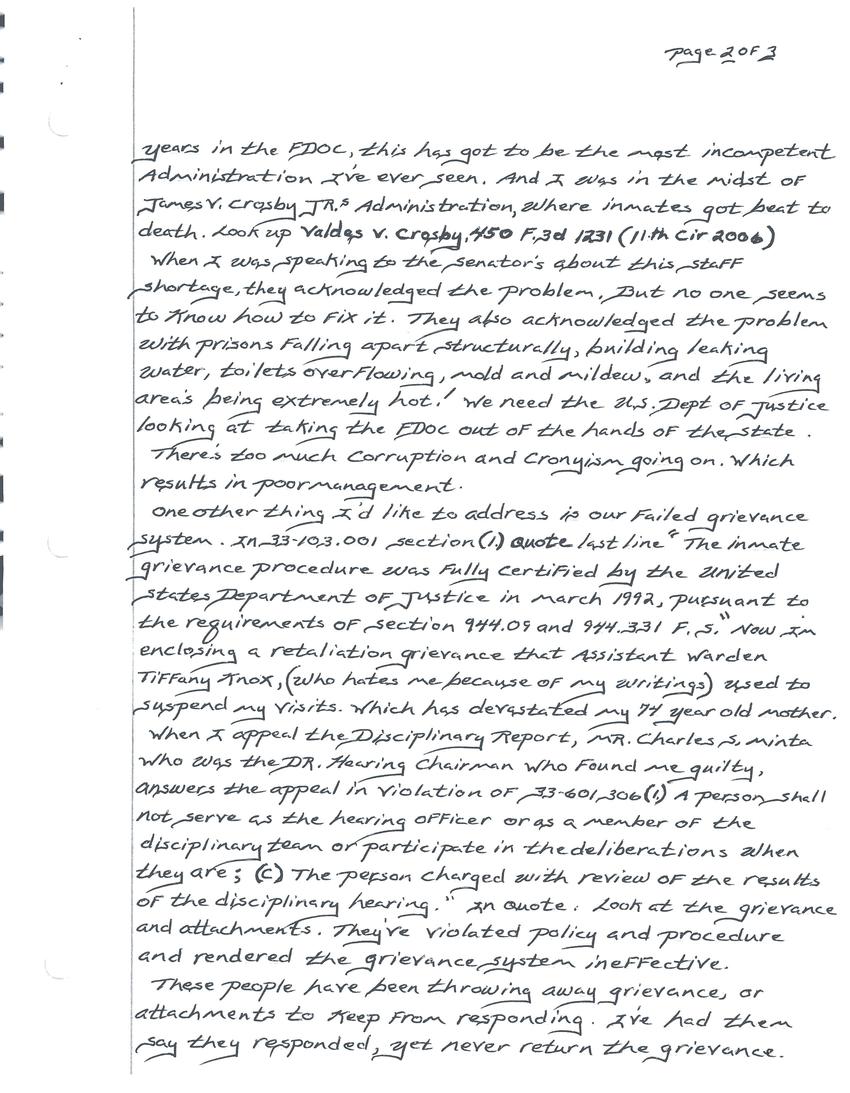 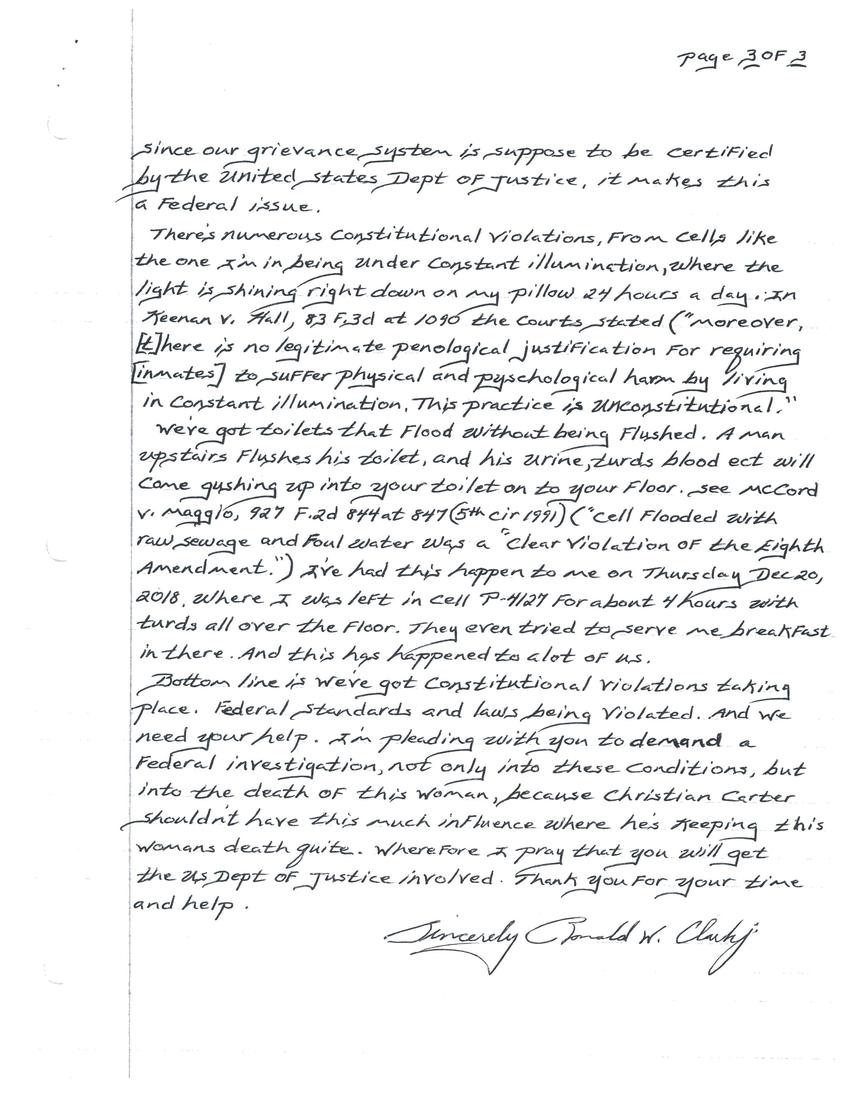 Greetings! I'm coming to you from Floridas death row and I'm requesting that you demand a Federal investigation into the death of a woman who was found in the hotel room of former Lt. Christian Carter, who has employed here at Union Correctional Institution. In May 2021 while attending the Fallen Officer Memorial Ceremony Lt. Christian Carter hired a known prostitute, and paid her with his prescription drugs. She was found dead several days later in his hotel room that was being paid for by the Florida Department of Corrections. (FDOC) I'm going to enclose a July 16, 2021 letter that I wrote to our state senator's and Reps. On Monday August 2, 2021 I met with senator Jeff Brandes and Senator Jason Pizzo of our Criminal Justice Committee, concerning the issues in this letter. I was informed there's nothing they can do about the dead woman. And you will not find this story in the media or in the Sheriff's Dept. website. Lt. Christian Carter obviously has some family who has major influence! Which is why I'm calling for the U.S. Dept. of Justice to get involved. I'm hoping you will take the lead on this. Everything that I know is in this July 16th letter. If your interested in meeting with me, I'd be more than happy to talk to you about any of these issues.
On page 4 of the July 16th letter, I was bringing to their attention, GHOSTING THE ROSTER. The staff is struggling due to poor leadership. While their asking for a death row inmates help to bring attention to this, well you know their desperate! You've got one officer working 4 maximum security post. On top of that pulling 16 hour shifts and if they refuse to come in and work on their days off, the Administration threatens to fire them. In my 30

years in the FDOC, this has got to be the most incompetent Administration I've ever seen. And I was in the midst of James V. Crosby Jr.'s Administration, where all inmates got beat to death. Look up Valdas v. Crosby. 450 F.3d 1231 (11th Cir 2006)
When I was speaking to the Senator's about this staff shortage, they acknowledged the problem. But no one seems to know how to fix it. They also acknowledged the problem with prisons falling apart structurally, building leaking water, toilets overflowing, mold and mildew, and the living area's being extremely hot! We need the U.S. Dept of Justice looking at taking the FDOC out of the hands of the state. There's too much corruption and cronyism going on. Which results in poor management.
One other thing I'd like to address is our failed grievance system. In 33-103.001 Section (1.) quote last line "The inmate grievance procedure was fully certified by the United States Department of Justice in March 1992, pursuant to the requirements of section 944.09 and 944.331 F.S." Now I'm enclosing a retaliation grievance that Assistant Warden Tiffany Knox, (who hates me because of my writings) used to suspend my visits. Which has devastated my 74 year old mother. When I appeal the Disciplinary Report, Mr. Charles S. Minta who was the DR. Hearing Chairman who found me guilty, answers the appeal in violation of 33-601.306 (1.) A person shall not serve as the hearing officer or as a member of the disciplinary team or participant in the deliberations when they are; (c) The person charged with review of the results of the disciplinary hearing." In Quote. Look at the grievance and attachments. They've violated policy and procedure and rendered the grievance system ineffective.
These people have been throwing away grievance, or attachments to keep from responding. I've had them say they responded, yet never return the grievance.

Since our grievance system is suppose to be certified by the United States Dept. of Justice, it makes this a Federal issue.
There's numerous Constitutional violations, from cells like the one I'm being in being under constant illumination, where the light is shining right down on my pillow 24 hours a day. In Keenan v. Hall, 83 F.3d at 1090 the courts stated ("Moreover, [t]here is no legitimate penological justification for requiring [inmates] to suffer physical and psychological harm by living in constant illumination. This practice is unconstitutional."
We've got toilets that flood without being flushed. A man upstairs flushes his toilet, and his urine, turds blood etc will come gushing up into your toilet on your floor. See McCord v. Maggio, 927 F.2d 844 (5th cir 1991)("Cell flooded with raw, sewage and foul water was a "clear violation of the Eighth Amendment.") I've had this happen to me on Thursday Dec 20, 2018. Where I was left in cell P-4127 for about 4 hours with turds all over the floor. They even tried to serve me breakfast in there. And this has happened to a lot of us.
Bottom line is we've go Constitutional violations taking place. Federal standards and laws being violated. And we need your help. I'm pleasing with you to demand a Federal investigation, not only into these conditions, but into the death of this woman, because Christian Carter shouldn't have this much influence where he's keeping this womans death quite. Wherefore I pray that you will get the U.S. Dept of Justice involved. Thank you for your time and help.