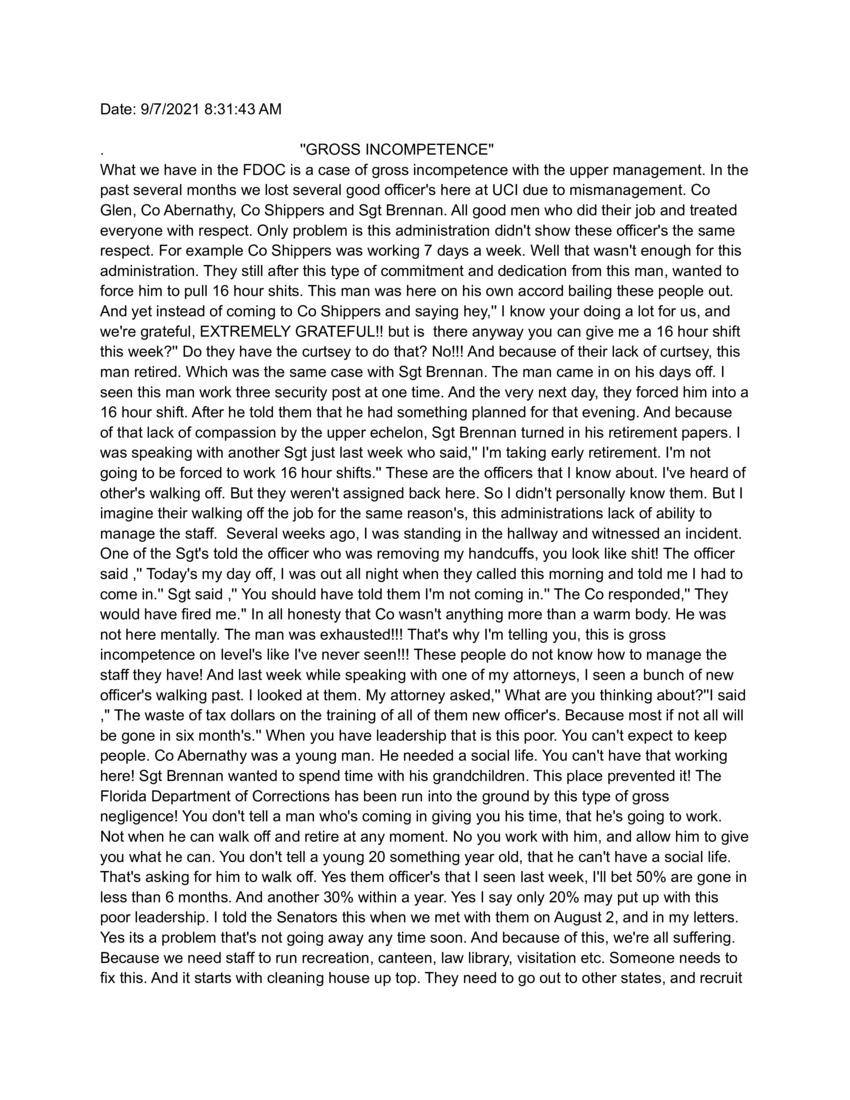 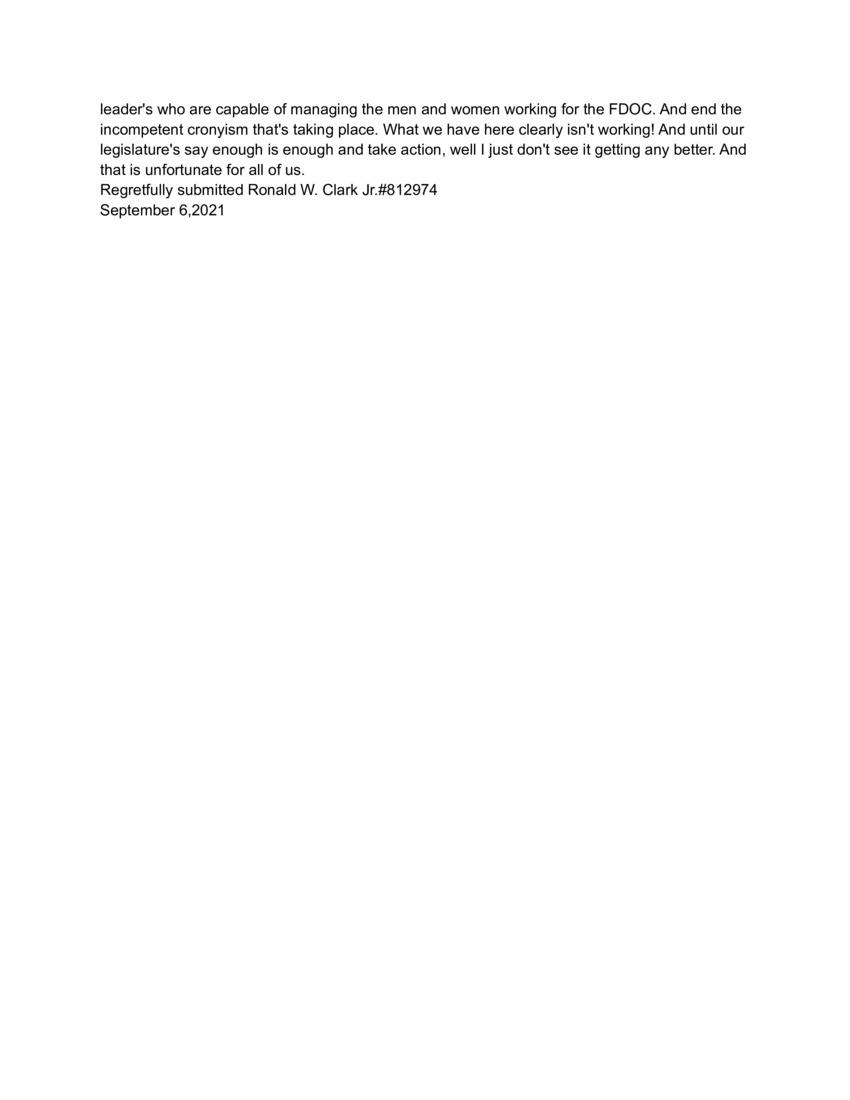 "GROSS INCOMPETENCE"
What we have in the FDOC is a case of gross incompetence with the upper management. In the past several months we lost several good officer's here at UCI due to mismanagement. Co Glen, Co Abernathy, Co Shippers and Sgt Brennan. All good men who did their job and treated everyone with respect. Only problem is this administration didn't show these officer's the same respect. For example Co Shippers was working 7 days a week. Well that wasn't enough for this administration. They still after this type of commitment and dedication from this man, wanted to force him to pull 16 hour shifts. This man was here on his own accord bailing these people out. And yet instead of coming to Co Shippers and saying hey, "I know your doing a lot for us, and we're grateful, EXTREMELY GRATEFUL!! but is there anyway you can give me a 16 hour shift this week?" Do they have the courtesy to do that? No!!! And because of their lack of courtesy, this man retired. Which was the same case with Sgt Brennan. The man came in on his day offs off. I seen this man work three security post at one time. And the very next day, they forced him into a 16 hour shift. After he told them that he had something planned for that evening. And because of that lack of compassion by the upper echelon, Sgt Brennan turned in his retirement papers. I was speaking with another Sgt just last week who said, "I'm taking early retirement. I'm not going to be forced to work 16 hour shifts." These are the officers that I know about. I've heard of other's walking off. But they weren't assigned back here. So I didn't personally know them. But I imagine their walking off the job for the same reason's, the administrations lack of ability to manage the staff. Several weeks ago, I was standing in the hallway and witnessed an incident. One of the Sgt's told the officer who was removing my handcuffs, you look like shit! The officer said, "Today's my day off, I was out all night when they called this morning and told me I had to come in." Sgt said, "You should have told them I'm not coming in." The Co responded, "They would have fired me." In all honesty that Co wasn't anything more than a warm body. He was not here mentally. The man was exhausted!!! That's why I'm telling you, this is gross incompetence on level's like I've never seen!!! These people do not know how to manage the staff they have! And last week while speaking with one of my attorneys, I seen a bunch of new officer's walking past. I looked at them. My attorney asked, "What are you thinking about?" I said, "The waste of tax dollars on the training of all them new officer's. Because most if not all will be gone in six month's." When you have leadership that is this poor. You can't expect to keep people. Co Abernathy was a young man. He needed a social life. You can't have that working here! Sgt Brennan wanted to spend time with his grandchildren. This place prevented it! The Florida Department of Corrections has been run into the ground by this type of gross negligence! You don't tell a man who's coming in giving you his time, that he's going to work. Not when he can walk off and retire at any moment. No you work with him, and allow him to give you what he can. You don't tell a young 20 something year old, that he can't have a social life. That's asking for him to walk off. Yes them officer's that I seen last week, I'll bet 50% are gone in less than 6 months. And another 30% within a year. Yes I say only 20% may put up with this poor leadership. I told the Senators this when we met with them on August 2, and in my letters. Yes its a problem that's not going away any time soon. And because of this, we're all suffering. Because we need staff to run recreation, canteen, law library, visitation etc. Someone needs to fix this. And it starts with cleaning house up top. They need to go out to other states, and recruit

leader's who are capable of managing the men and women working for the FDOC. And end the incompetent cronyism that's taking place. What we have here clearly isn't working! And until our legislature's say enough is enough and take action, well I just don't see it getting any better. And that is unfortunate for all of us.
Regretfully submitted Ronald W. Clark Jr. #812974
September 6, 2021