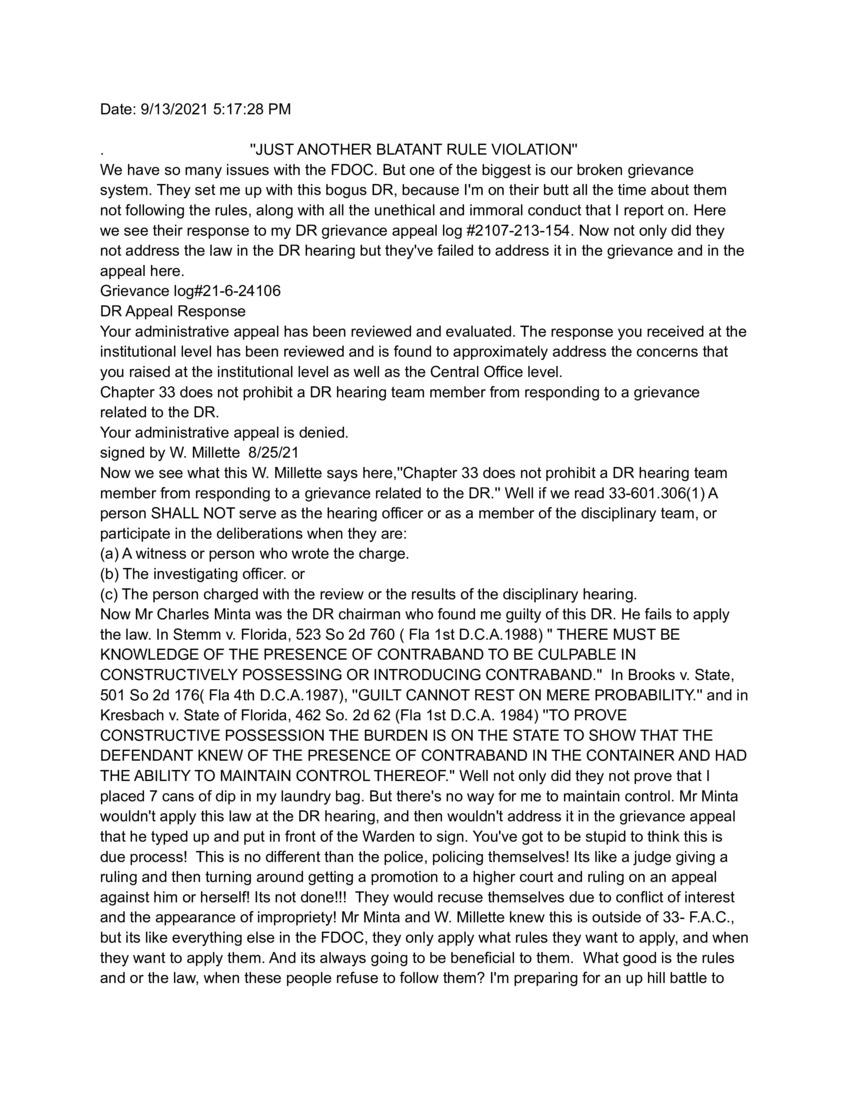 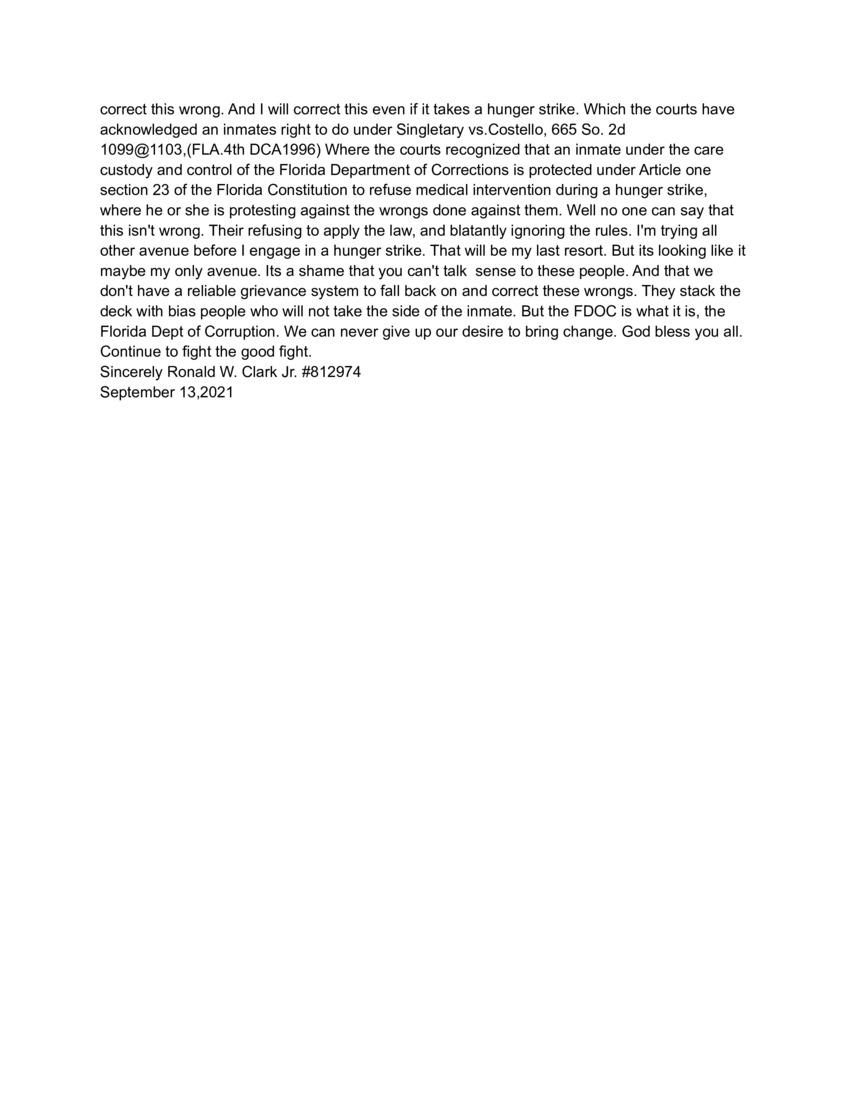 "JUST ANOTHER BLATANT RULE VIOLATION"
We have so many issues with the FDOC. But one of the biggest is our broken grievance system. They set me up with this bogus DR, because I'm on their butt all the time about them not following the rules, along with all the unethical and immoral conduct that I report on. Here we see their response to my DR grievance appeal log #2107-213-154. Now not only did they not address the law in the DR hearing but they've failed to address it in the grievance and in the appeal here.
Grievance log #21-6-24106
DR Appeal Response
Your administrative appeal has been received and evaluated. The response you received at the institutional level has been reviewed and is found to approximately address the concerns that you raised at the institutional level as well as the Central Office level.
Chapter 33 does not prohibit a DR hearing team member from responding to a grievance related to the DR.
Your administrative appeal is denied.
signed by W. Millette 8/25/21
Now we see that this W. Millete says here, "Chapter 33 does not prohibit a DR hearing team member from responding to a grievance related to the DR." Well if we read 33-601.306(1) A person SHALL NOT serve as the hearing officer or as a member of the disciplinary team, or participate in the deliberations when they are:
(a) A witness or person who wrote the charge.
(b) The investigating officer. or
(c) The person charged with the review or the results of the disciplinary hearing.
Now Mr Charles Minta was the DR chairman who found me guilty of this DR. He fails to apply the law. In Stemm v. Florida, 523 So 2d 760 (Fla 1st D.C.A.1988) "THERE MUST BE KNOWLEDGE OF THE PRESENCE OF CONTRABAND TO BE CULPABLE IN CONSTRUCTIVELY POSSESSING OR INTRODUCING CONTRABAND." In Brooks v. State, 501 So 2d 176 (Fla 4th D.C.A.1987), "GUILT CANNOT REST ON MERE PROBABILITY." and in Kresbach v. State of Florida, 462 So. 2d 62 (Fla 1st D.C.A. 1984) "TO PROVE CONSTRUCTIVE POSSESSION THE BURDEN IS ON THE STATE TO SHOW THAT THE DEFENDENT KNEW OF THE PRESENCE OF CONTRABAND IN THE CONTAINER AND HAD THE ABILITY TO MAINTAIN CONTROL THEREOF." Well not only did they not prove that I placed 7 cans of dip in my laundry bag. But there's no way for me to maintain control. Mr Minta wouldn't apply this law at the DR hearing, and then wouldn't address it in the grievance appeal that he typed up and put in front of the Warden to sign. You've got to be stupid to think this is due process! This is no different than the police, policing themselves! Its like a judge giving a ruling and then turning around getting a promotion to higher court and ruling on an appeal against him or hersel! Its not done!!! They would rescue themselves due to conflict of interest and the appearance of impropriety! Mr Minta and W. Millette knew this is outside of 33-F.A.C., but its like everything else in the FDOC, they only apply what rules they want to apply, and when they want to apply them. And its always going to be beneficial to them. What good is in the rules and or the law, when these people refuse to follow them? I'm preparing for an up hill battle to

correct this wrong. And I will correct this even if it takes a hunger strike. Which the courts have acknowledged an inmates right to do under Singletary vs. Costello, 665 So. 2d 1099@1103, (FLA 4th DCA 1996) Where the courts recognized that an inmate under the care custody and control of the Florida Department of Corrections is protected under Article one section 23 of the Florida Constitution to refuse medical intervention during a hunger strike, where he or she is protesting against the wrongs done against them. Well no one can say that this isn't wrong. Their refusing to apply the law, and blatantly ignoring the rules. I'm trying all other avenues before I engage in a hunger strike. That will be my last resort. But its looking like maybe my only avenue. Its a shame that you can't talk sense to these people. And that we don't have a reliable grievance system to fall back on and correct these wrongs. They stack the deck with bias people who will not take the side of the inmate. But the FDOC is what it is, the Florida Dept of Corruption. We can never give up our desire to bring change. God bless you all. Continue to fight the good fight.
Sincerely Ronald W. Clark Jr. #812974
September 13, 2021