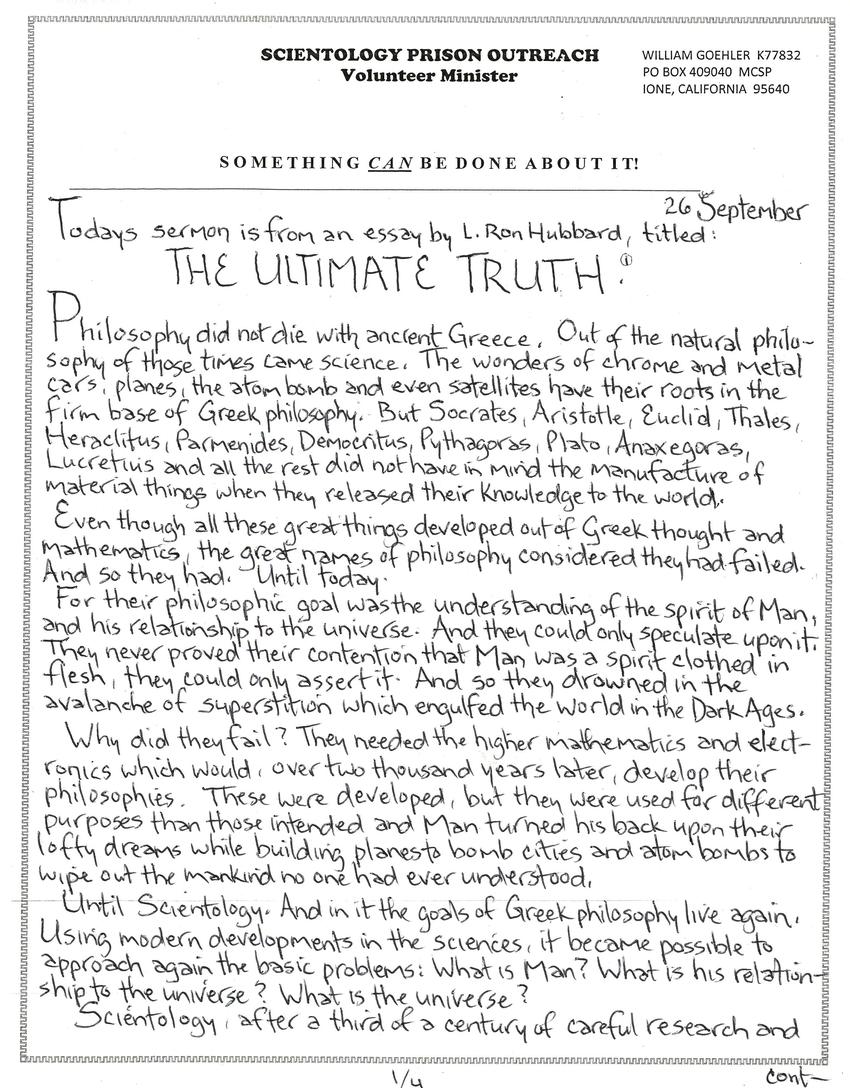 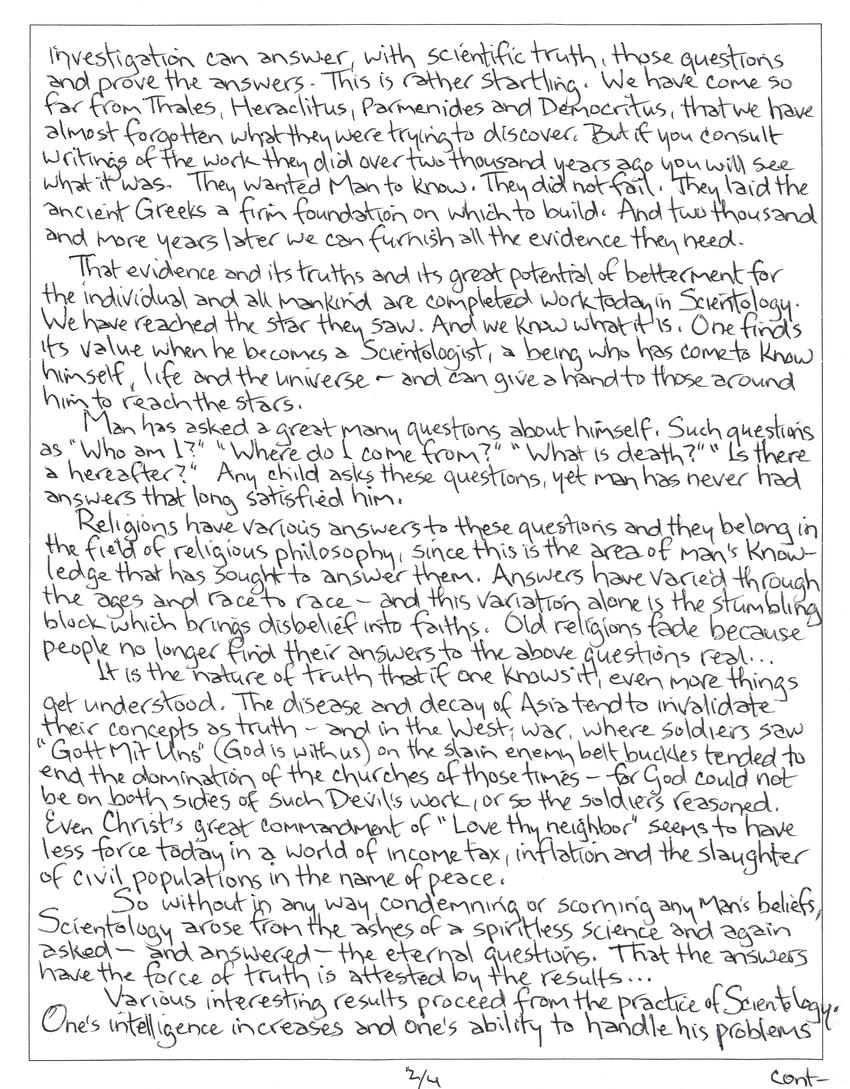 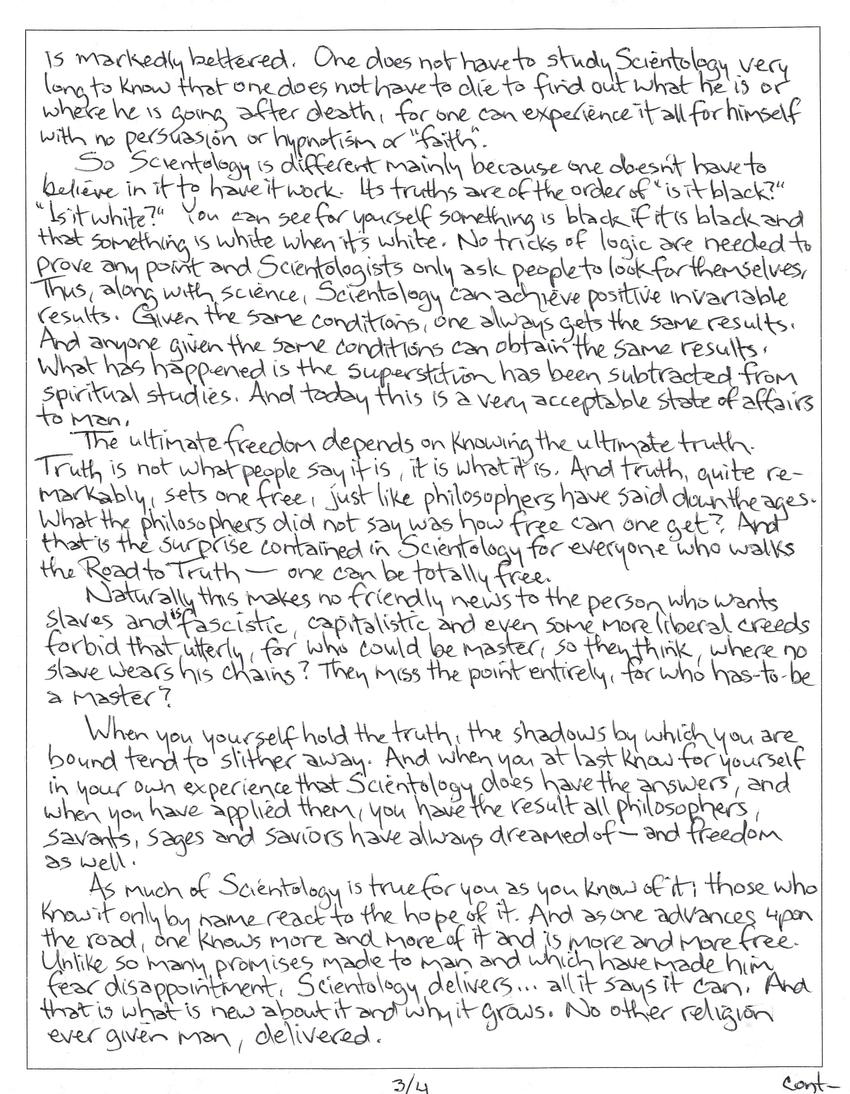 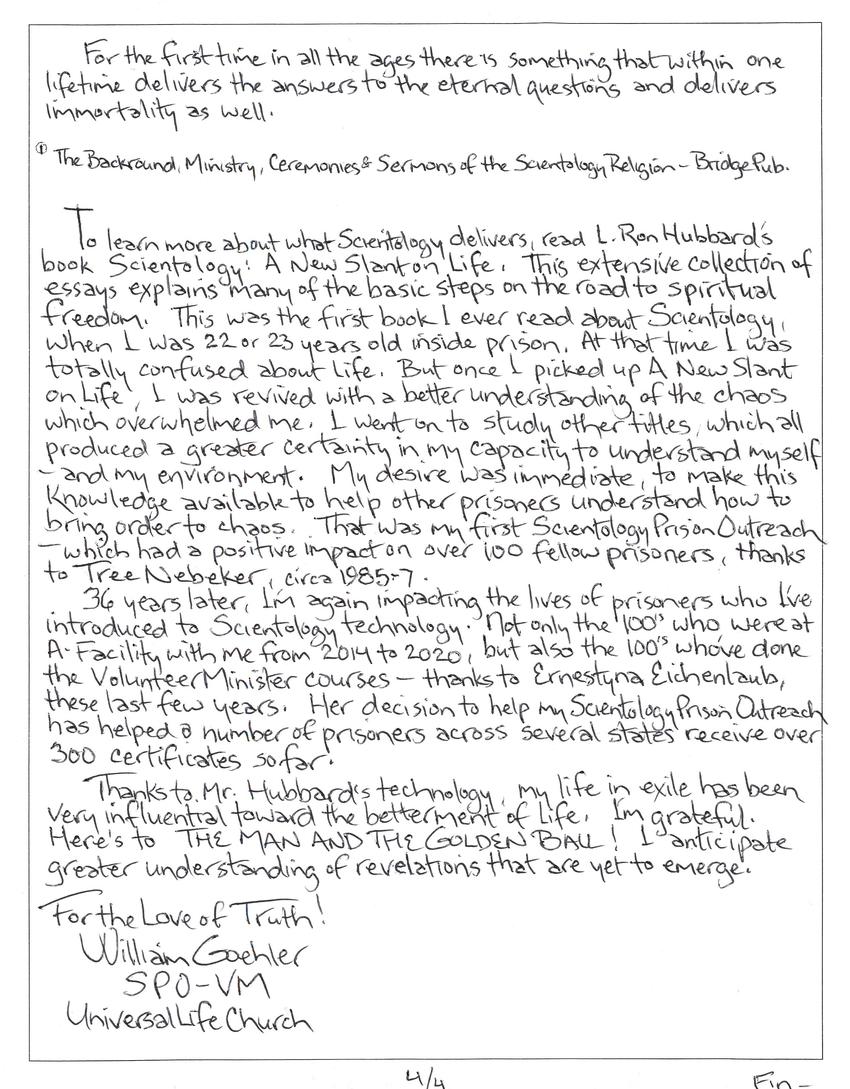 SOMETIHNG CAN BE DONE ABOUT IT!

26 September
Todays sermon is from an essay by L. Ron Hubbard, titled:
THE ULTIMATE TRUTH.①
Philosophy did not die with ancient Greece. Out of natural philosophy of those times came science. The wonders of chrome and metal cars, planes, the atom bomb and even satellites have their roots in the firm base of Greek philosophy. But Socrates, Aristotle, Euclid, Thales, Heraclitus, Parmenides, Democritus, Pythagoras, Plato, Anaxagoras, Lucretius and all the rest did not have in mind the manufacture of material things when they released their knowledge to the world.
Even though all these great things developed out of Greek thought and mathematics, the great names of philosophy considered they had failed. And so they had. Until today.
For their philosophic goal was the understanding of the spirit of Man, and his relationship to the universe. And they could only speculate upon it. They never proved their contention that Man was a spirit clothed in flesh, they could only assert it. And so they drowned in the avalanche of superstition which engulfed the world in the Dark Ages.
Why did they fail? They needed the higher mathematics and electronics which would, over two thousand years later, develop their philosophies. These were developed, but they were used for different purposes than those intended and Man turned his back upon their lofty dreams while building planes to bomb cities and atom bombs to wipe out the mankind no one had ever understood.
Until Scientology. And in it the goals of Greek philosophy live again. Using modern developments in the sciences, it became possible to approach again the basic problem: What is Man? What is his relationship to the universe? What is the universe?
Scientology, after a third of a century of careful research and

investigation can answer with scientific truth, those questions and prove the answers. This is rather startling. We have come so far from Thales, Heraclitus, Parmenides and Democritus, that we have almost forgotten what they were trying to discover. But if you consult writings of the work they did over two thousand years ago you will see what it was. They wanted Man to know. They did not fail. They laid the ancient Greeks a firm foundation on which to build. And two thousand and more years later we can furnish all the evidence they need.
That evidence and its truths and its great potential of betterment for the individual and all mankind are completed work today in Scientology. We have reached the star they saw. And we know what it is. One finds himself, life and the universe - and can give a hand to those around him to reach the stars.
Man has asked a great many questions about himself. Such questions as "Who am I?" "Where do I come from?" "What is death?" "Is there a hereafter?" Any child asks these questions, yet man has never had answers that long satisfied him.
Religions have various answers to these questions and they belong in the field of religious philosophy, since this is the area of man's knowledge that has sought to answer them. Answers have varied through the ages and race to race - and this variation alone is the stumbling block which brings disbelief into faiths. Old religions fade because people no longer find their answers to the above questions real...
It is the nature of truth that if one knows it! Even more things get understood. The disease and decay of Asia tend to invalidate their concepts as truth - and in the West war where soldiers saw "Gott Mit Uns" (God is with us) on the slain enemy belt buckles tended to end the domination of the churches of those times - for God could not be on both sides of such Devil's work, or so the soldiers reasoned. Even Christ's great commandment of "Love thy neighbor" seems to have less force today in a world of income tax, inflation and the slaughter of civil populations in the name of peace.
So without in any way condemning or scorning any Man's beliefs, Scientology arose from the ashes of a spiritless science and again asked - and answered - the eternal questions. That the answers have the force of truth is attested by the results...
Various interesting results proceed from the practice of Scientology. One's intelligence increases and one's ability to handle his problems

is markedly bettered. One does not have to study Scientology very long to know that one does not have to die to find out what he is or where he is going after death, for one can experience it all for himself with no persuasion or hypnotism or "faith".
So Scientology is different mainly because one doesn't have to believe in it to have it work. Its truths are of the order of "is it black?" "Is it white?" You can see for yourself something is black if it is black and that something is white when it's white. No tricks of logic are needed to prove any point and Scientologists only ask people to look for themselves. Thus, along with science, Scientology can achieve positive invariable results. Given the same conditions, one always gets the same results. What has happened is the superstition has been subtracted from spiritual studies. And today this is a very acceptable state of affairs to man.
The ultimate freedom depends on knowing the ultimate truth. Truth is not what people say it is, it is what it is. And truth, quite remarkably, set one free, just like philosophers have said down the ages. What the philosophers did not say was how free can one get? And that is the surprise contained in Scientology for everyone who walks the Road to Truth - one can be totally free.
Naturally this makes no friendly news to the person who wants slaves and is fascistic, capitalistic and even some more liberal creeds forbid that utterly, for who could be master, so they think, where no slave wears his chains? They miss the point entirely, for who has-to-be a master?
When you yourself hold the truth, the shadows by which you are bound tend to slither away. And when you at last know for yourself in your own experience that Scientology does have the answers, and when you have applied them, you have the result all philosophers, savants, sages and saviors have always dreamed of - and freedom as well.
As much of Scientology is true for you as you know of it; those who know it only by name react to the hope of it. And as one advances upon the road, one knows more and more of it and is more and more free. Unlike so many promises made to man and which have made him fear disappointment. Scientology delivers...all it says it can. And that is what is new about it and why it grows. No other religion ever given man, delivered.

For the first time in all the ages there is something that within one lifetime delivers the answers to the eternal questions and delivers immortality as well.

To learn more about what Scientology delivers, read L. Ron Hubbard's book Scientology: A New Slant on Life. This extensive collection of essays explains many of the basic steps on the road to spiritual freedom. This was the first book I ever read about Scientology, when I was 22 or 23 years old inside prison. At that time I was totally confused about life. But once I picked up A New Slant on Life, I was revived with a better understanding of the chaos which overwhelmed me. I went on to study other titles, which all produced a greater certainty in my capacity to understand myself - and my environment. My desire was immediate, to make this knowledge available to help other prisoners understand how to bring order to chaos. That was my first Scientology Prison Outreach - which had a positive impact on over 100 fellow prisoners, thanks to Tree Nebeker, circa 1985-7.
36 years later, I'm again impacting the lives of prisoners who I've introduced to Scientology technology. Not only the 100's who were at A Facility with me from 2014 to 2020, but also the 100's who've done the Volunteer Minister courses - thanks to Ernestyna Eichenlaub, these last few years. Her decision to help my Scientology Prison Outreach has helped a number of prisoners across several states receive over 300 certificates so far.
Thanks to Mr. Hubbard's technology, my life in exile has been very influential toward the betterment of life. I'm grateful. Here's to THE MAN AND THE GOLDEN BALL! I anticipate greater understanding of revelations that are yet to emerge.
For the Love of Truth!
William Goehler
SPO-VM
UniversialLifeChurch