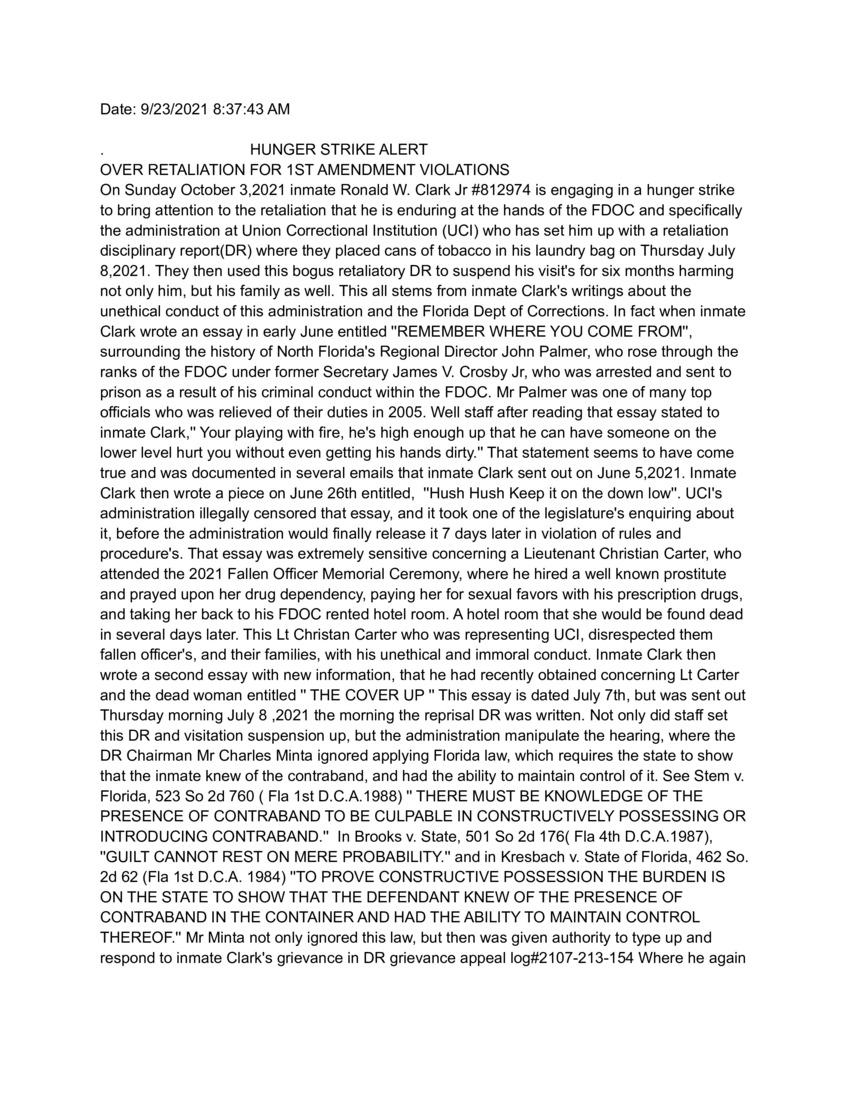 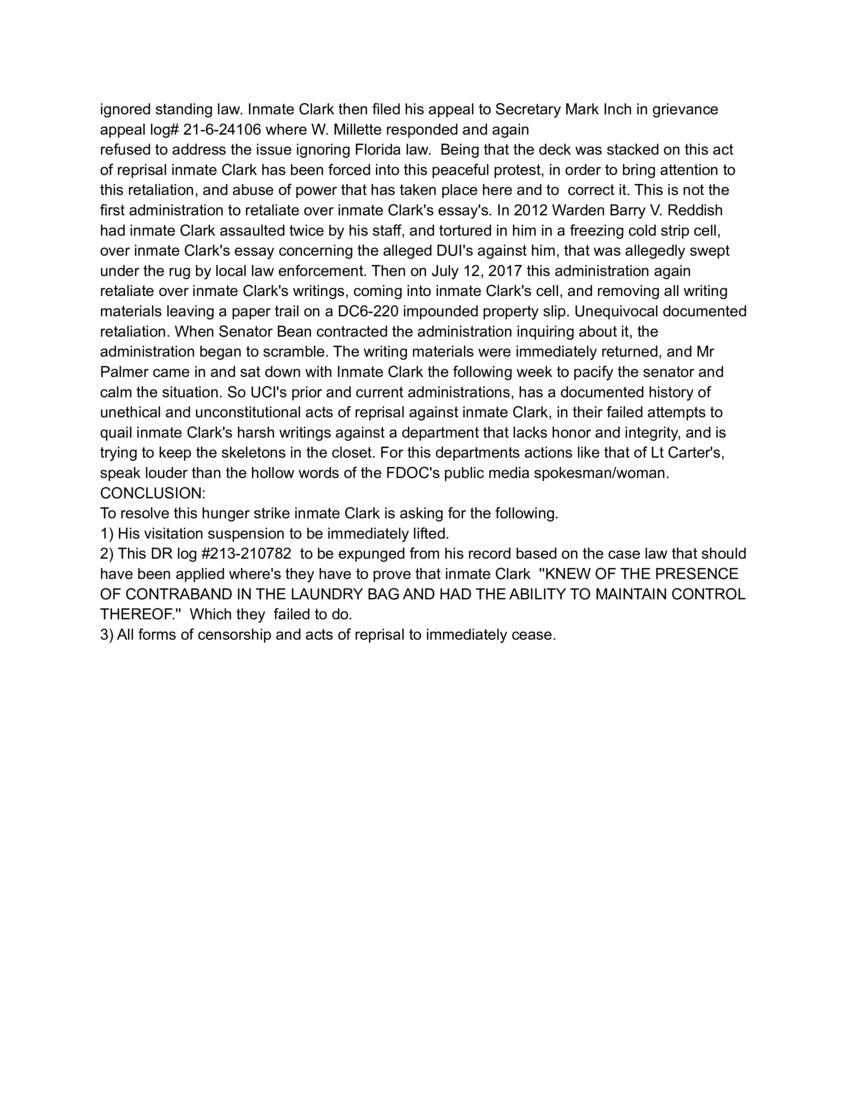 HUNGER STRIKE ALERT
OVER RETALIATION FOR 1ST AMENDMENT VIOLATIONS
On Sunday October 3, 2021 inmate Ronald W. Clark Jr #812974 is engaging in a hunger strike to bring attention to the retaliation that he is enduring at the hands of the FDOC and specifically the administration at Union Correctional Institution (UCI) who has set him up with a retaliation disciplinary record (DR) where they placed cans of tobacco in his laundry bag on Thursday July 8, 2021. They then used this bogus retaliatory DR to suspend his visit's for six months harming not only him, but his family as well. This all stems from inmate Clark's writings about the unethical conduct of this administration and the Florida Dept. of Corrections. In fact when inmate Clark wrote an essay in early June entitled "REMEMBER WHERE YOU COME FROM", surrounding the history of North Florida's Regional Direction John Palmer, who rose through the ranks of the FDOC under former Secretary James V. Crosby Jr, who was arrested and sent to prison as a result of his criminal conduct within the FDOC. Mr. Palmer was one of many top officials who was relieved of their duties in 2005. Well staff after reading that essay stated to inmate Clark, "You're playing with fire, he's high enough up that he can have someone on the lower level hurt you without even getting his hands dirty." That statement seems to have come true and was documented in several emails that inmate Clark sent out on June 5, 2021. Inmate Clark then wrote a piece on June 26th entitled, "Hush Hush Keep it on the down low". UCI's administration illegally censored that essay, and it took one of the legislature's inquiring about it, before the administration would finally release it 7 days later in violation of rules and procedures. That essay was extremely sensitive concerning a Lieutenant Christian Carter, who attended the 2021 Fallen Officer Memorial Ceremony, where he hired a well known prostitute and prayed upon her drug dependency, paying for her sexual favors with his prescription drugs, and taking her back to his FDOC rented hotel room. A hotel room that she would be found dead in several days later. This Lt. Christian Carter who was representing UCI, disrespected the fallen officer's, and their families, with his unethical and immoral conduct. Inmate Clark then wrote a second essay with new information, that he had recently obtained concerning Lt. Carter and the dead woman entitled "THE COVER UP" This essay is dated July 7th, but was sent out Thursday morning July 8, 2021 the morning the reprisal DR was written. Not only did staff set this DR and visitation suspension up, but the administration manipulate the hearing, where the DR Chairman Mr. Charles Minta ignored applying Florida law, which requires the state to show that the inmate knew of the contraband, and had the ability to maintain control of it. See Stem v. Florida, 523 So 2d 760 (Fla 1st D.C.A.1988) "THERE MUST BE KNOWLEDGE OF THE PRESENCE OF CONTRABAND TO BE CULPABLE IN CONSTRUCTIVELY POSSESSING OR INTRODUCING CONTRABAND." In Brooks v. State, 501 So 2d 176 (Fla 4th D.C.A.1987), "GUILT CANNOT REST ON MERE PROBABILITY." and in Kresbach v. State of Florida, 462 So. 2d 62 (Fla 1st D.C.A. 1984) "TO PROVE CONSTRUCTIVE POSSESSION THE BURDEN IS ON THE STATE TO SHOW THAT THE DEFENDANT KNEW OF THE PRESENCE OF CONTRABAND IN THE CONTAINER AND HAD THE ABILITY TO MAINTAIN CONTROL THEREOF." Mr. Minta not only ignored this law, but then was given authority to type up and respond to inmate Clark's grievance in DR grievance appeal log #2107-213-154 where he again

ignoring standing law. Inmate Clark then filed his appeal to Secretary Mark Inch in grievance appeal log #21-6-24106 where W. Millette responded and again refused to address the issue ignoring Florida law. Bring that the deck was stacked on this act of reprisal inmate Clark has been forced into this peaceful protest, in order to bring attention to this retaliation, and abuse of power that has taken place here and to correct it. This is not the first administration to retaliate over inmate Clark's essay's. In 2012 Warden Barry V. Reddish had inmate Clark assaulted twice by his staff, and tortured in him in freezing cold strip cell, over inmate Clark's essay concerning the alleged DUI's against him, that was allegedly swept under the rug by local law enforcement. Then on July 12, 2017 this administration again retaliate over inmate Clark's writings, coming into inmate Clark's cell, and removing all writing materials leaving a paper trail on a FC6-220 impounded property slip. Unequivocal documented retaliation. When Senator Bean contracted the administration inquiring about it, the administration began to scramble. The writing materials were immediately returned, and Mr. Palmer came in and sat down with Inmate Clark the following week to pacify the senator and calm the situation. So UCI's prior and current administrations, has a documented history of unethical and unconstitutional acts of reprisal against inmate Clark, in their failed attempts to quail inmate Clark's harsh writings against a department that lacks honor and integrity, and is trying to keep the skeletons in the closet. For this departments actions like that of Lt Carter's, speak louder than the hollow words of the FDOC's public media spokesman/woman.
CONCLUSION:
To resolve this hunger strike inmate Clark is asking for the following.
1) His visitation suspension to be immediately lifted.
2) This DR log #213-20782 to be expunged from his record based on the case law that should have been applied where's they have to prove that inmate Clark "KNEW OF THE PRESENCE OF CONTRABAND IN THE LAUNDRY BAG AND HAD THE ABILITY TO MAINTAIN CONTROL THEREOF." Which they failed to do.
3) All forms of censorship and acts of reprisal to immediately cease.