The Death of Steve Smith 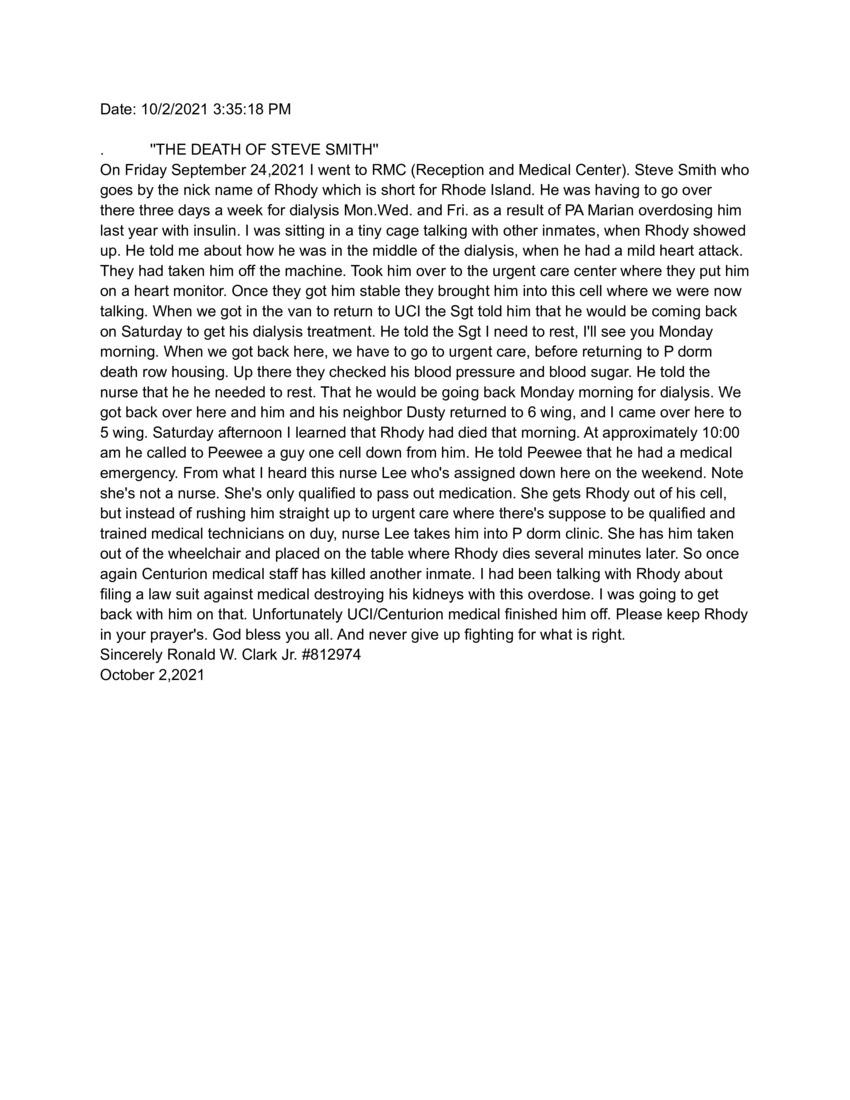 "THE DEATH OF STEVE SMITH"

On Friday September 24, 2021 I went to RMC (Reception and Medical Center). Steve Smith who
goes by the nickname of Rhody which is short for Rhode Island. He was having to go over
there three days a week for dialysis Mon. Wed. and Fri. as a result of PA Marian overdosing him
last year with insulin. I was sitting in a tiny cage talking with other inmates, when Rhody showed
up. He told me about how he was in the middle of dialysis, when he had a mild heart attack.
They had taken him off the machine. Took him over to the urgent care center where they put him
on a heart monitor. Once they got him stable they brought him into this cell where we were now
talking When we got in the van to return to UCI the Sgt told him that he would be coming back
on Saturday to get his dialysis treatment. He told the Sgt I need to rest, I'll see you Monday
morning. When we got back here, we have to go to urgent care, before returning to P dorm
death row housing. Up there they checked his blood pressure and blood sugar. He told the
nurse that he needed to rest. That he would be going back Monday morning for dialysis. We
got back over here and him and his neighbor Dusty returned to 6 wing, and I came over here to
5 wing. Saturday afternoon I learned that Rhody had died that morning. At approximately 10:00
am he called to Peewee a guy one cell down from him. He told Peewee that he had a medical
emergency. From what I heard this nurse Lee who's assigned down here on the weekend. Note
she's not a nurse. She's only qualified to pass out medication. She gets Rhody out of his cell,
but instead of rushing him straight up to urgent care where there's suppose to be qualified and
trained medical technicians on duty, nurse Lee takes him into P dorm clinic. She has him taken
out of the wheelchair and placed on the table where Rhody dies several minutes later. So once
again Centurion medical staff has killed another inmate. I had been talking with Rhody about
filing a law suit against medical destroying his kidneys with this overdose. I was going to get
back with him on that. Unfortunately UCI/Centurion medical finished him off. Please keep Rhody
in your prayers. God bless you all. And never give up fighting for what is right.
Sincerely Ronald W. Clark Jr. #812974
October 2,2021