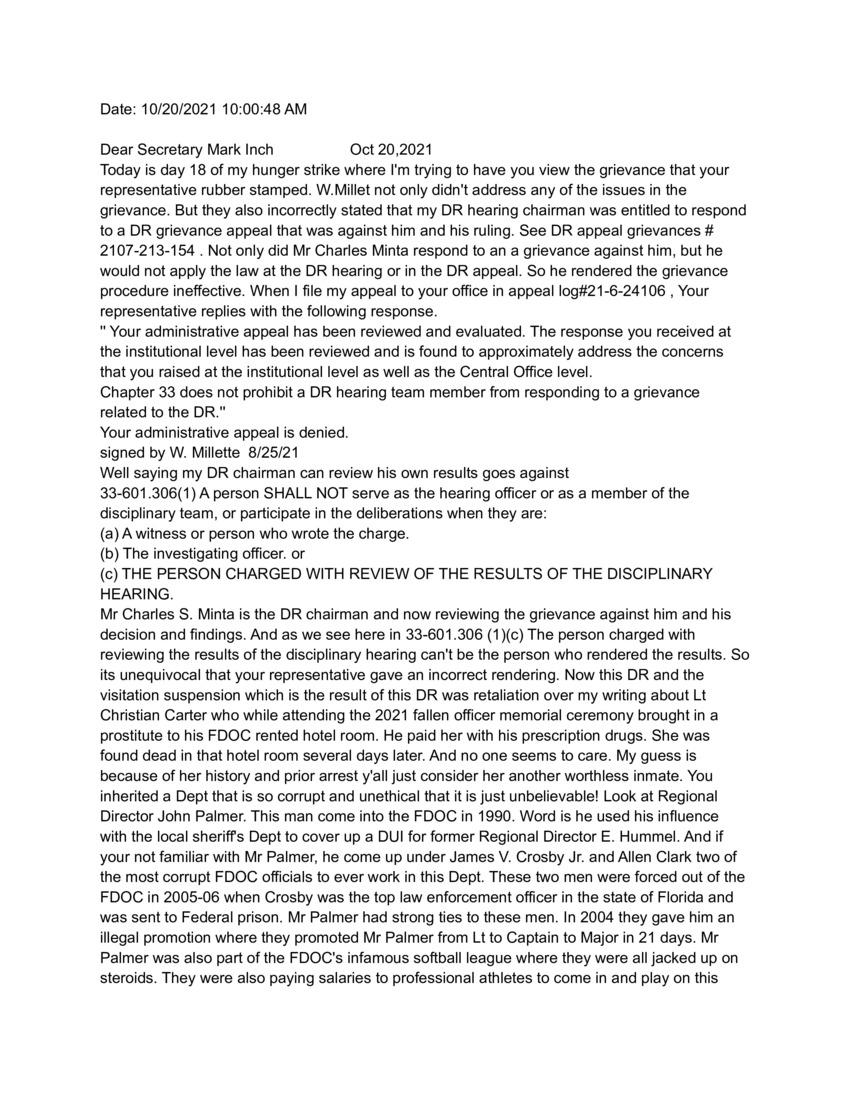 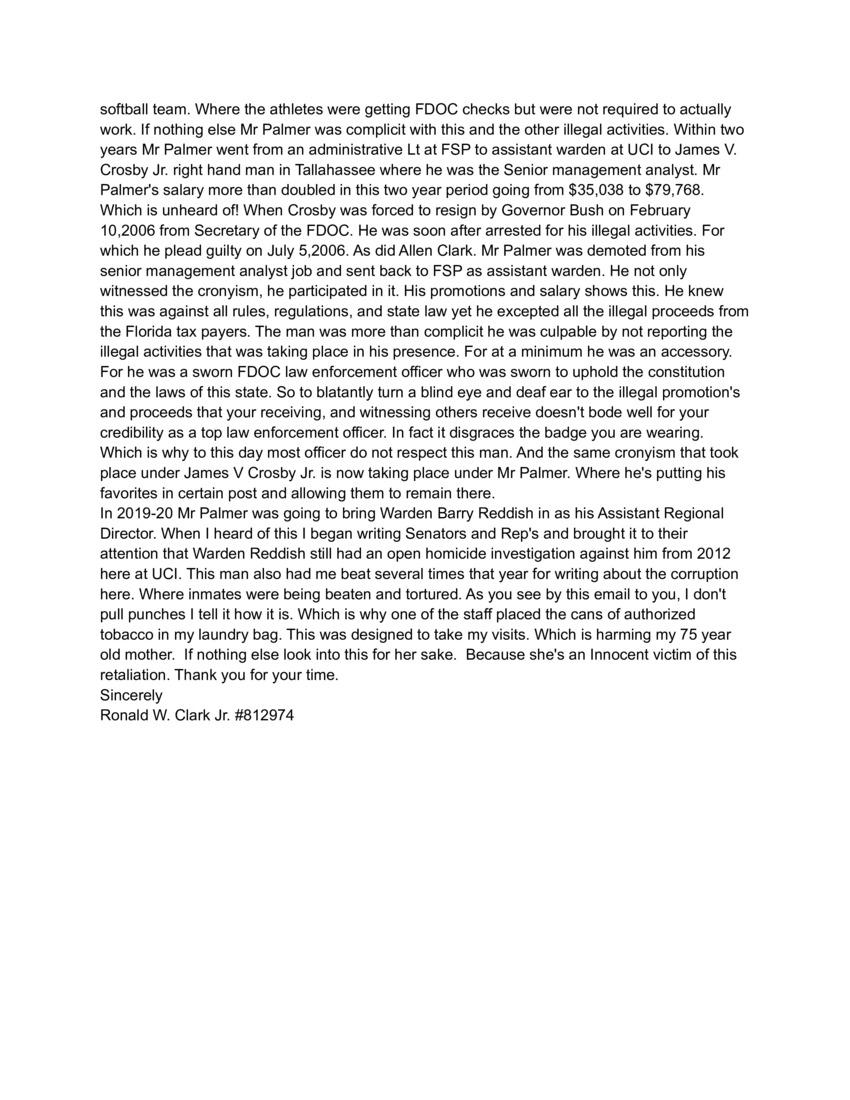 Oct 20, 2021
Dear Secretary Mark Inch
Today is day 18 of my hunger strike where I'm trying to have you view the grievance that your representative rubber stamped. W. Millet not only didn't address any of the issues in the grievance. But they also incorrectly stated that my DR hearing chairman was entitled to respond to a DR grievance appeal that was against him and his ruling. See DR appeal grievances #2107-213-154. Not only did Mr. Charles Minta respond to a grievance against him, but he would not apply the law at the DR hearing or in the DR appeal. So he rendered the grievance procedure ineffective. When I file my appeal to your office in appeal log #21-6-24106, your representative replies with the following response,
"Your administrative appeal has been reviewed and evaluated. The response you received at the institutional level has been reviewed and is found to approximately address the concerns that you raised at the institutional level as well as the Central Office level.
Chapter 33 does not prohibit a DR hearing team member from responding to a grievance related to the DR."
Your administrative appeal is denied.
Signed by W. Millette 8/25/21
Well saying my DR chairman can review his own results goes against 33-601.306(1) A person SHALL NOT serve as the hearing officer or as a member of the disciplinary team, or participate in the deliberation when they are:
(a) A witness or person who wrote the chaarge.
(b) The investigating officer. or
(c) THE PERSON CHARGED WITH REVIEW OF THE RESULTS OF THE DISCIPLINARY HEARING.
Mr. Charles S. Minta is the DR chairman and now reviewing the grievance against him and his decision and findings. And as we see here in 33-601.306(1)(c) The person charged with reviewing the results of the disciplinary hearing can't be the person who rendered the results. So its unequivocal that your representative gave an incorrect rendering. Now this DR and the visitation suspension which is the result of this DR was retaliation over my writings about Lt. Christian Carter who while attending the 2021 fallen officer memorial ceremony brought in a prostitute to his FDOC rented hotel room. He paid her with his prescription drugs. She was found dead in that hotel room several days later. And no one seems to care. My guess is because of her history and prior arrest y'all just consider her another worthless inmate. You inherited a Dept that is so corrupt and unethical that it is just unbelievable! Look at Regional Director John Palmer. This man came into the FDOC in 1990. Word is he used his influence with the local sheriff's Dept to cover up a DUI for former Regional Director E. Hummel. And if your not familiar with with Mr. Palmer, he came up under James V. Crosby Jr. and Allen Clark two of the most corrupt FDOC officials to ever work in this Dept. There two men were forced out of the FDOC in 2005-06 when Crosby was the top law enforcement officer in the state of Florida and was sent to Federal prison. Mr. Palmer had strong ties to these men. In 2004 they gave him an illegal promotion where they promoted Mr. Palmer from Lt. to Captain to Major in 21 days. Mr. Palmer was also part of the FDOC's infamous softball league where they were all jacked up on steroids. They were also paying salaries to professional athletes to come in and play on this

softball team. Where the athletes were getting FDOC checks but were not required to actually work. If nothing else Mr. Palmer was complicit with this and the other illegal activities. Within two years Mr. Palmer went from an administrative Lt. as FSP to assistant warden at UCI to James V. Crosby Jr.'s right hand man in Tallahassee where he was the Senior management analyst. Mr. Palmer's salary more than doubled in this two year period going from $35,038 to $79,768. Which is unheard of! When Crosby was forced to resign by Governor Bush on February 10, 2006 from Secretary of the FDOC. He was soon after arrested for his illegal activities. For which he plead guilty on July 5, 2006. As did Allen Clark. Mr. Palmer was demoted from his senior management analyst job and sent back to FSP as assistant warden. He not only witnessed the cronyism, he participated in it. His promotions and salary shows this. He knew this was against the rules, regulations, and state law yet he excepted all the illegal proceeds from the Florida tax payers. The men was more than complicit he was culpable by not reporting the illegal activities that was taking place in his presence. For at a minimum he was an accessory. For he was a sworn FDOC law enforcement officer who was sworn to uphold the constitution and the laws of this state. So to blatantly turn a blind eye and deaf ear to the illegal promotion's and proceeds that your receiving, and witnessing others receive doesn't bode well for your credibility as a top law enforcement officer. In fact it disgraces the badge you are wearing. Which is why to this day most officers do not respect this man. And the same cronyism that took place under James V. Crosby Jr. is now taking place under Mr. Palmer. Where he's putting his favorites in certain post and allowing them to remain there.
In 2019-20 Mr. Palmer was going to bring Warden Barry Reddish in as his Assistant Regional Director. When I heard of this I began writing Senators and Rep's and brought it to their attention that Warden Reddish still had an open homicide investigation against him from 2012 here at UCI. This man also had me beat several times that year for writing about the corruption here. Where inmates were being beaten and tortured. As you see by this email to you, I don't pull punches I tell it how it is. Which is why one of the staff placed the cans of authorized tobacco in my laundry bag. This was designed to take my visits. Which is harming my 75 year old mother. If nothing else look into this for her sake. Because she's an innocent victim of this retaliation. Thank you for your time.
Sincerely
Ronald W. Clark Jr. #812974