Viewer on the McMichael's and Neighbor; Kyle Rittenhouse 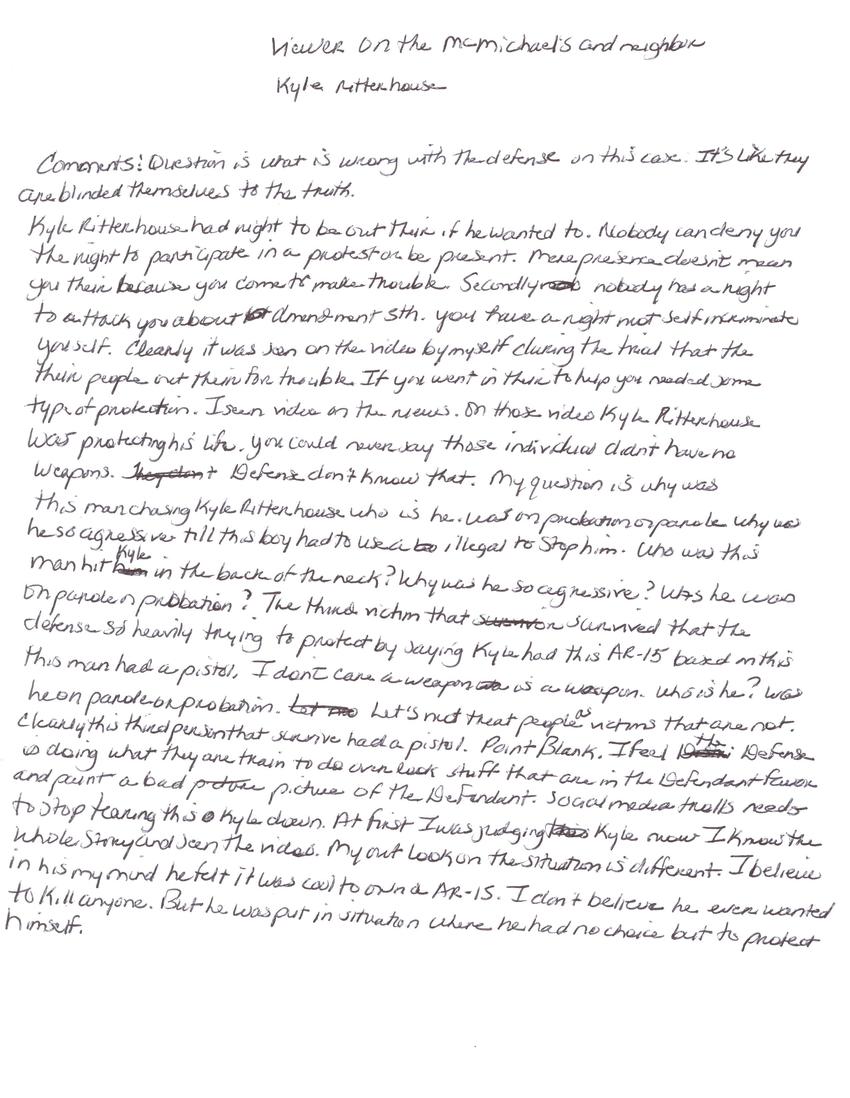 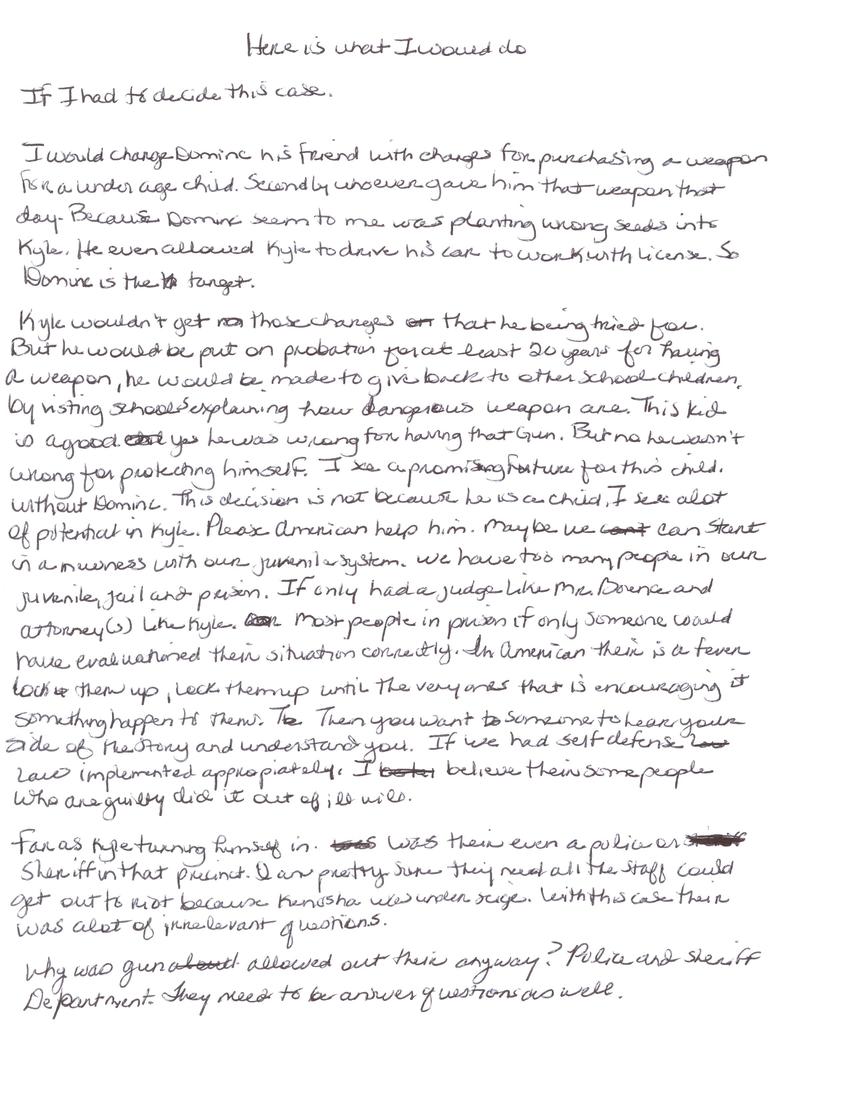 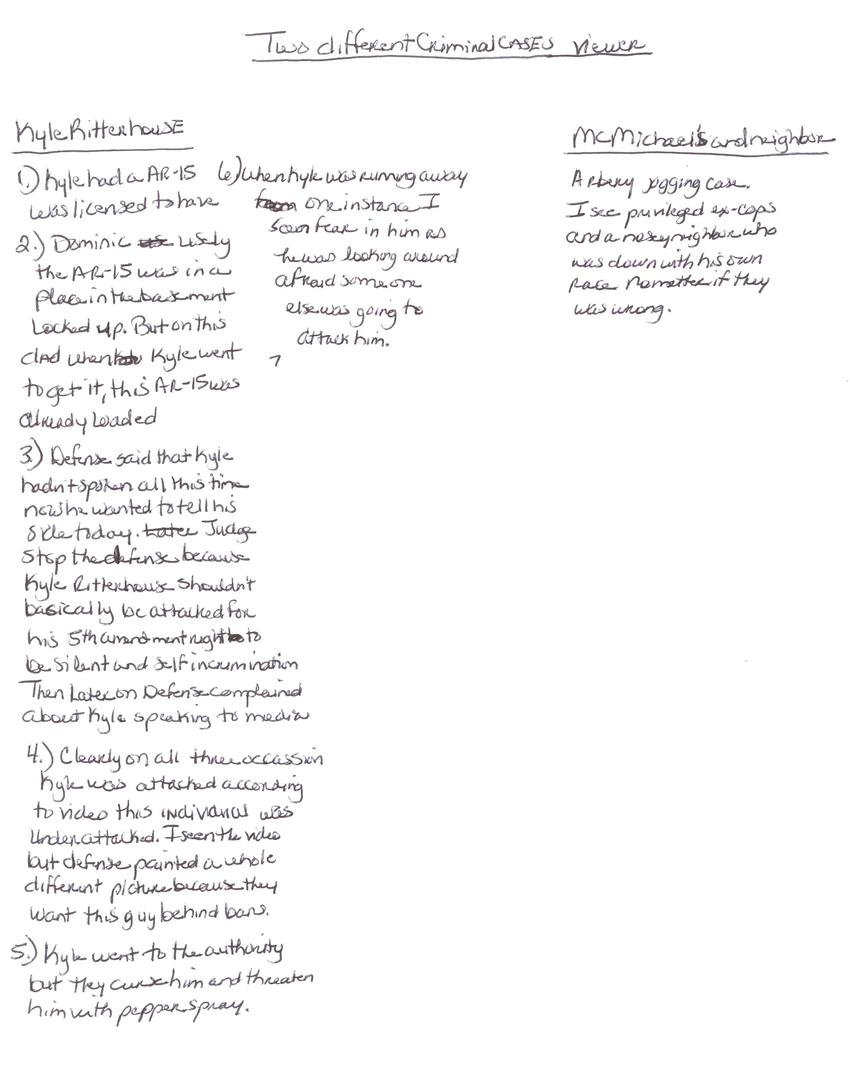 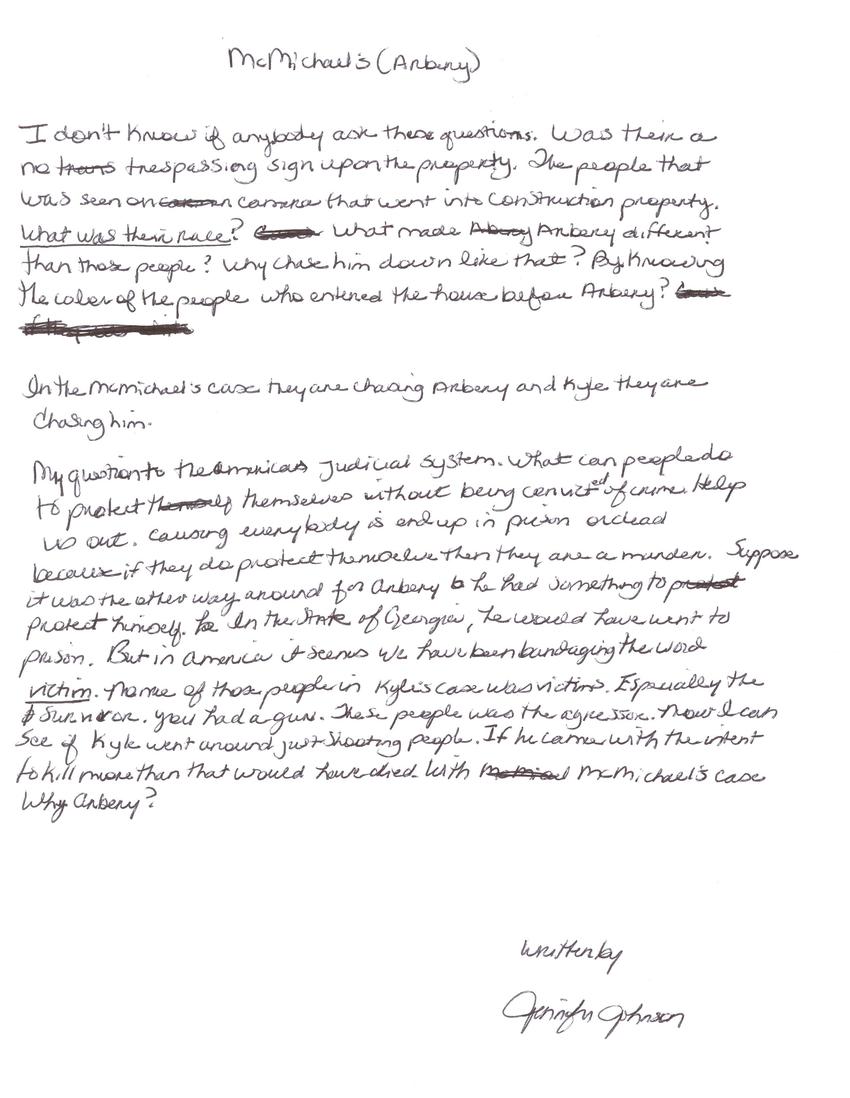 Viewer on the McMichael's and neighbor
Kyle Rittenhouse
Comments: Question is what is wrong with the defense on this case. It's like they are blinded themselves to the truth.
Kyle Rittenhouse had right to be out there if he wanted to. Nobody can deny you the right to participate in a protest or be present. Mere presence doesn't mean you're there because you come to make trouble. Secondly nobody has a right to attack you about 5th amendment. You have a right not self incriminate yourself. Clearly it was seen on the video by myself during the trial that the people not there for trouble. If you went in there to help you needed some type of protection. I seen video on the news. On those video Kyle Rittenhouse was protecting his life. You could never say those individuals didn't have no weapons. Defense don't know that. My question is why was this man chasing Kyle Rittenhouse. Who is he? Was on probation or parole? Why was he so aggressive till this boy had to use a illegal to stop him. Who was this man hit Kyle in the back of the neck? Why was he so aggressive? Why was he on parole or probation? The third victim that survived that the defense so heavily trying to protect by saying Kyle had this AR-15 based on this man had a pistol. I don't care a weapon is a weapon. Who is he? Was he on parole or probation? Let's not treat people as victims that are not. Clearly this third person that survived had a pistol. Point blank. I feel the defense is doing what they are train to do overlook stuff that are in the defendant favor and paint a bad picture of the defendant. Social media trolls need to stop tearing this Kyle down. At first I was judging Kyle. Now I know the whole story and seen the video. My outlook on the situation is different. I believe in his mind he felt it was cool to own a AR-15. I don't believe he ever wanted to kill anyone. But he was put in situation where he had no choice but to protect himself.

Here is what I would do if I had to decide this case.
I would charge Dominic his friend with charges for purchasing a weapon for a under age child. Secondly whoever game him that weapon that day- because Dominic seem to me was planting wrong seeds into Kyle. He even allowed Kyle to drive his car to work with license. So Dominic is the target.
Kyle wouldn't get those charges that he being tried for. But he would be put on probation for at least 20 years for having a weapon, he would be made to give back to school children by visiting schools explaining how dangerous weapon are. This kid is a good. Yes he was wrong for having that gun. But no he wasn't wrong for protecting himself. I see a promising future for this child. Without Dominic, this decision is not because he is a child. I see a lot of potential in Kyle. Please American help him. Maybe we can start in a newness with our juvenile system. We have too many people in our juvenile jail and prison. If only had a judge like Mr. Boence and attorney(s) like Kyle. Most people in prison if only someone would have evaluated their situation correctly. In America there is a fever lock them up, lock them up until the very ones that is encouraging it something happen to them. Then you want someone to hear your side of the story and understand you. If we had self defense laws implemented appropriately, I believe there some people who are guilty did it out of ill will.

Far as Kyle turning himself in. Was there even a police or sheriff in that precinct? I am pretty sure they need all the staff could get out to riot because Kenosha was under siege. With this case there was a lot of irrelevant questions.

Why was gun allowed out there anyway? Police and sheriff department. They need to be answer questions as well.

2 different criminal cases viewer:
Kyle Rittenhouse:
1.) Kyle had a AR-15 was licensed to have
2.) Dominic used the AR-15 was in place in the basement locked up. But on this day when Kyle went to get it, this AR-15 was already loaded
3.) Defense said that Kyle hadn't spoken all this time now he wanted to tell his side today. Judge stop the defense because Kyle Rittenhouse shouldn't basically be attacked for his 5th amendment right to be silent and self incrimination. Then later on defense complained about Kyle speaking to media
4.) Clearly on all their occasion Kyle was attacked according to video this individual was under attack. I seen the video but defense painted a whole different picture because they want this guy behind bars
5.) Kyle went to the authority but they curse him and threaten him with pepper spray
6.) When Kyle was running away one instance I seen fear in him as he was looking around afraid someone else was going to attack him.

McMichael's and neighbor:
Arbery jogging case. I see privileged ex-cops and a nosey neighbor who was down with his own race no matter if they was wrong.

McMichael's (Arbery)
I don't know if anybody ask these questions. Was there a no trespassing sign on the property? The people that was seen on camera that went into construction property. What was their race? What made arbery different than those people? Why chase him down like that? By knowing the color of the people who entered the house before Arbery?

My question to the American judicial system. What can people do to protect themselves without being convicted of crime. Help us out. Causing everybody is end up in prison or dead because if they do protect themselves then they are a murderer. Suppose it was the other way around for Arbery. He had something to protect himself. In the State of Georgia, he would have went to prison. But in America it seems we have been bandaging the word victim. None of these victims in Kyle's case were victims. Especially the survivor. You had a gun. These people was the agressor. Now I can see if Kyle went around just shooting people. If he came with the intent to kill more than that would have died. With McMichael's case, Why Arbery?

Thanks for writing! I finished the transcription for your post. Your questions and thoughts about this case are very interesting. I have wondered why they aren't asking those same questions. It will be interesting to see what happens to Kyle in the future since he is so young.