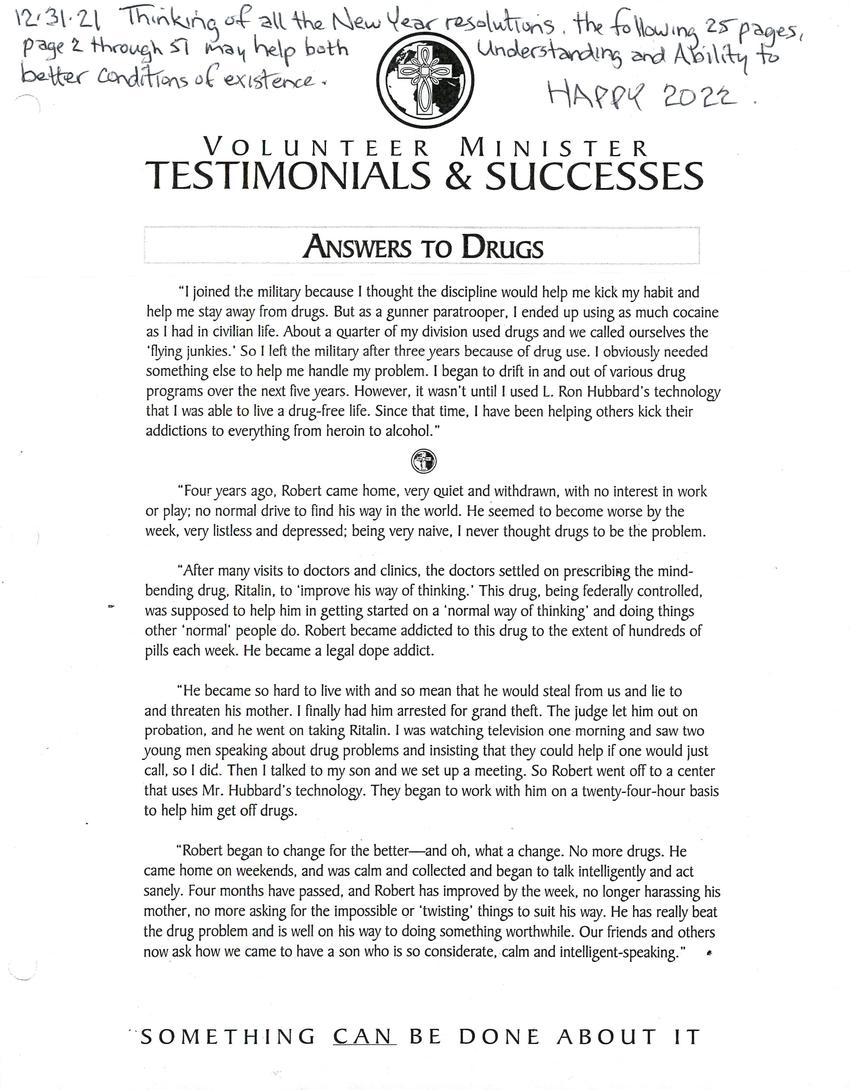 12-31-21 Thinking of all the New Year resolutions, the following 25 pages, page 2 through 51 may help both understanding and ability to better conditions of existence. Happy 2022.

ANSWERS TO DRUGS
"I joined the military because I thought the discipline would help me kick my habit and help me stay away from drugs. But as a gunner paratrooper, I ended up using as much cocaine as I had in civilian life. About a quarter of my division used drugs and we called ourselves the 'flying junkies.' So I left the military after three years because of drug use. I obviously needed something else to help me handle my problem. I began to drift in and out of various drug programs over the next five years. However, it wasn't until I used L. Ron Hubbard's technology that I was able to live a drug-free life. Since that time, I have been helping others kick their addictions to everything from heroin to alcohol."

"Four years ago, Robert came home, very quiet and withdrawn, with no interest in work or play; no normal drive to find his way in the world. He seemed to become worse by the week, very listless and depressed; being very naïve, I never thought drugs to be the problem.

"After many visits to doctors and clinics, the doctors settled on prescribing the mind-bending drug. Ritalin, to 'improve his way of thinking.' This drug, being federally controlled, was supposed to help him in getting started on a 'normal way of thinking' and doing things other 'normal' people do. Robert became addicted to this drug to the extent of hundreds of pills each week. He became a legal dope addict.

"He became so hard to live with and so mean that he would steal from us and lie to and threaten his mother. I finally had him arrested for grand theft. The judge let him out on probation, and he went on taking Ritalin. I was watching television one morning and saw two young men speaking about drug problems and insisting that they could help if one would just call, so I did. Then I talked to my son and we set up a meeting. So Robert went off to a center that uses Mr. Hubbard's technology. They began to work with him on a twenty-four-hour basis to help him get off drugs.

"Robert began to change for the better - and oh, what a change. No more drugs. He came home on weekends, and was calm and collected and began to talk intelligently and act sanely. Four months have passed, and Robert has improved by the week, no longer harassing his mother, no more asking for the impossible or 'twisting' things to suit his way. He has really beat the drug problem and is well on his way to doing something worthwhile. Our friends and others now ask how we came to have a son who is so consideration, calm and intelligent-speaking."

SOMETHING CAN BE DONE ABOUT IT