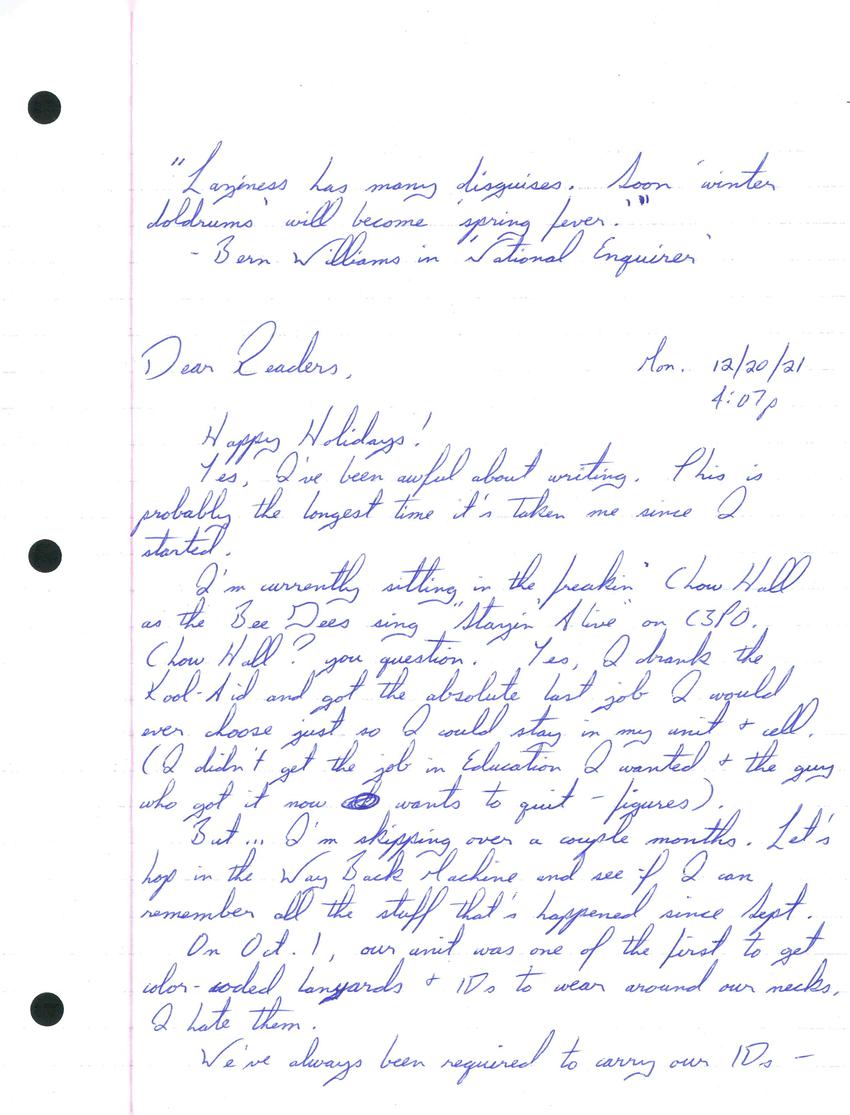 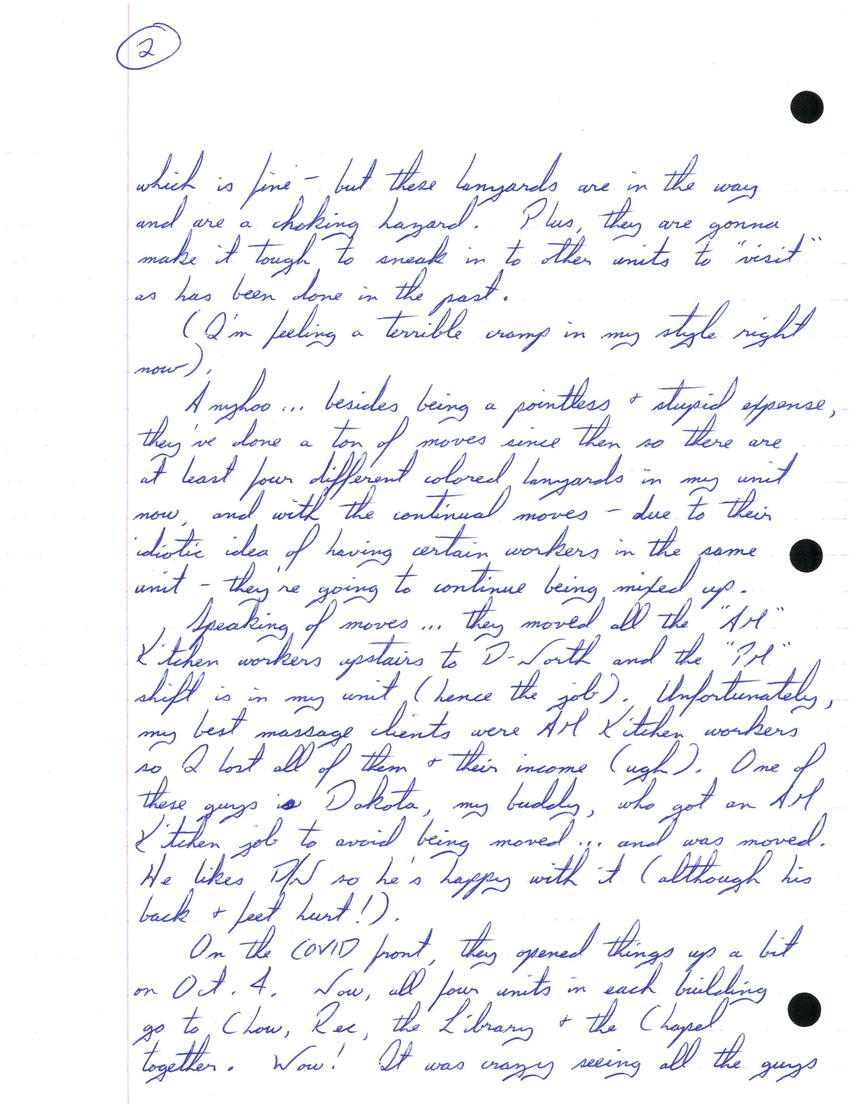 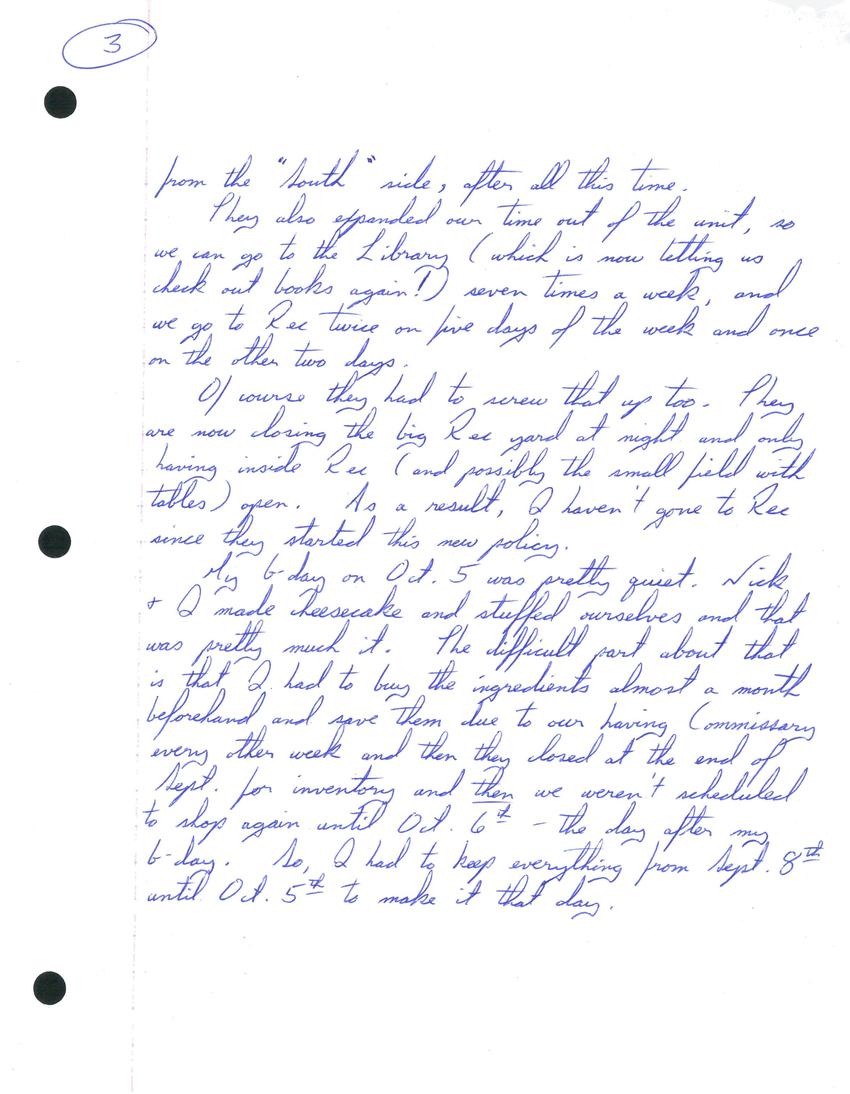 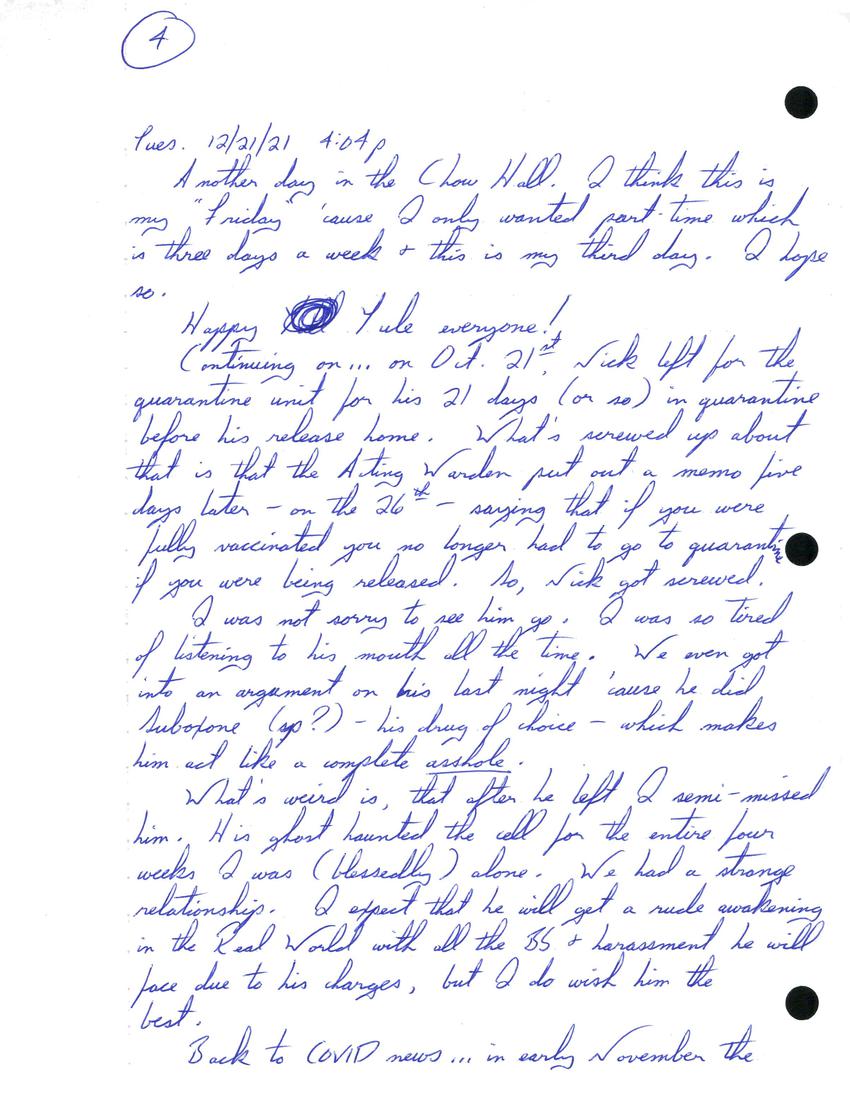 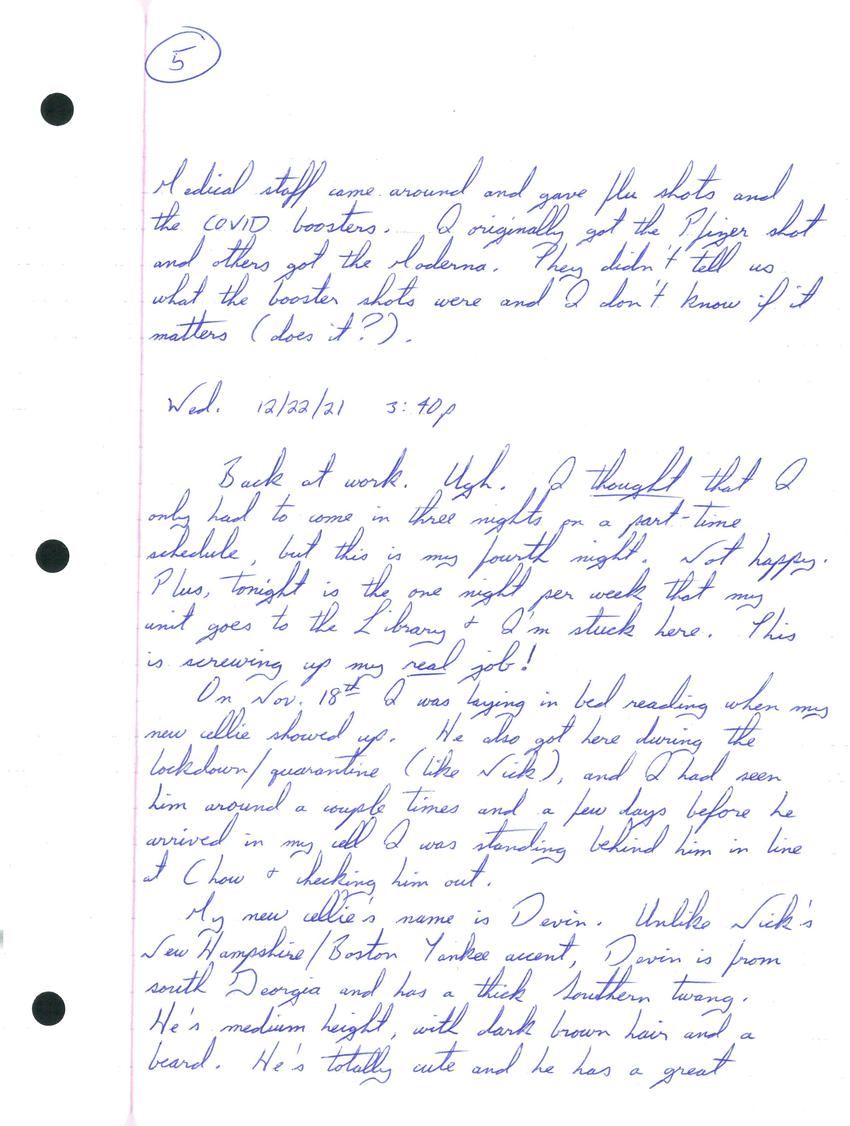 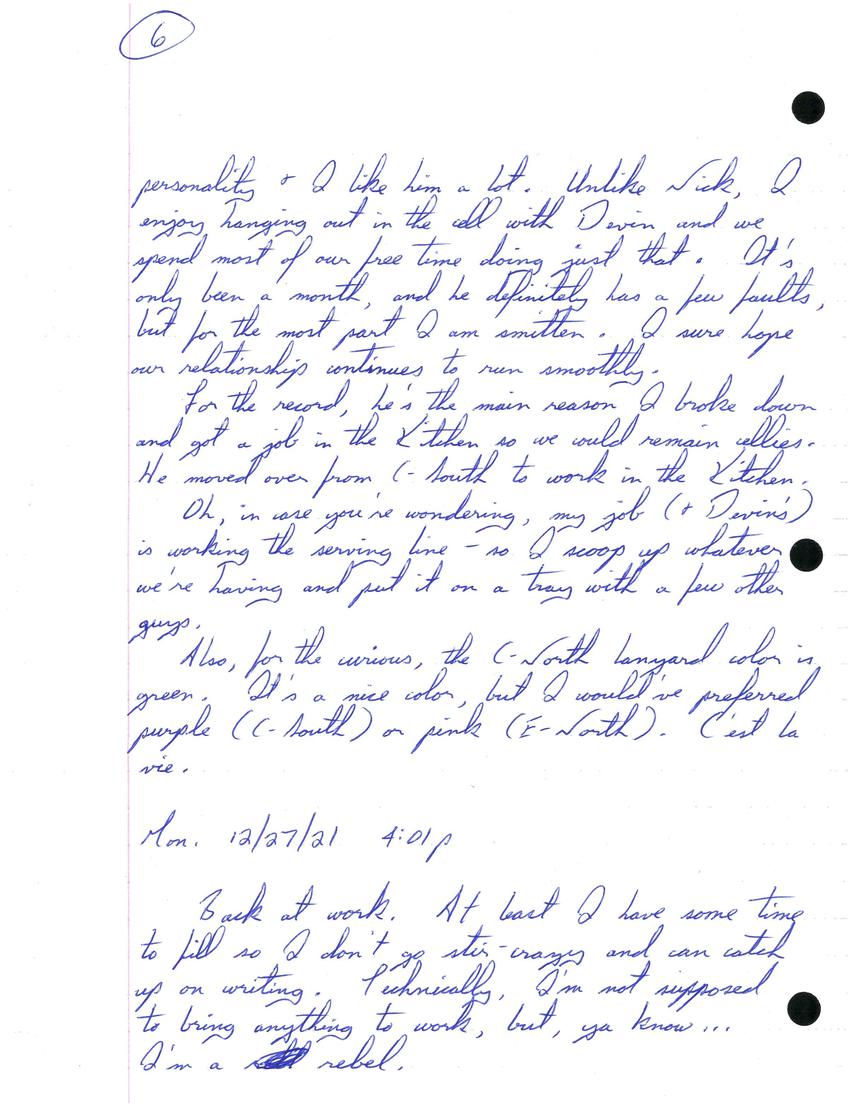 Happy Holidays!
Yes, I've been awful about writing. This is probably the longest time it's Taken me since I started.

I'm currently sitting in the freakin' Chow Hall as the Bee Gees sing "Stayin' Alive" on C3PO. Chow Hall? you question. Yes, I drank the Kool-Aid and got the absolute last job I would ever choose just so I could stay in my unit & cell. (I didn't get the job in Education I wanted & the guy who got it now wants to quit - figures).

But ... I'm skipping over a couple months. Let's hop in the Way Back Machine and see if I can remember all the stuff that's happened since Sept.

On Oct. 1, our unit was one of the first to get color-coded lanyards & IDs to wear around our necks. I hate them.

We've always been required to carry our IDs - which is fine - but these lanyards are in the way and are a choking hazard. Plus, they are gonna make it tough to sneak into other units to "visit" as has been done in the past.

(I'm feeling a terrible cramp in my style right now).

Anyhoo ... besides being a pointless & stupid expense, they've done a ton of moves since then so there are at least four different colored lanyards in my unit now, and with the continual moves - due to their idiotic idea of having certain workers in the same unit - they're going to continue being mixed up.

Speaking of moves ... they moved all the "AM" Kitchen workers upstairs to D-North and the "PM" shift is in my unit (hence the job). Unfortunately, my best massage clients were AM Kitchen workers so I lost all of them & their income (ugh). One of these guys is Dakota, my buddy, who got an AM Kitchen job to avoid being moved ... and was moved. He likes D/N so he's happy with it (although his back & feet hurt!).

On the COVID front, they opened things up a bit on Oct. 4. Now, all four units in each building go to Chow, Rec, the Library & the Chapel together. Wow! It was crazy seeing all the guys from the "South" side, after all this time.

They also expanded our time out of the unit, so we can go to the Library (which is now letting us check out book again!) seven times a week, and we go to Rec twice on five days of the week and once on the other two days.

Of course they had to screw that up too. They are now closing the big Rec yard at night and only having inside Rec (and possibly the small field with tables) open. As a result, I haven't gone to Rec since they started this new policy.

My b-day on Oct. 5 was pretty quiet. Nick & I made cheesecake and stuffed ourselves and that was pretty much it. The difficult part about that is that I had to buy the ingredients almost a month beforehand and save them due to our having Commissary every other week and then they closed at the end of Sept. for inventory and then we weren't scheduled to shop again until Oct. 6th - The day after my b-day. So, I had to keep everything from Sept. 8th until Oct. 5th to make it that day.

Another day in the Chow Hall. I think this is my "friday"'cause I only wanted part time which is three days a week & this is my third day. I hope so.

Continuing on ... Oct. 21st, Nick left for the quarantine unit for his 21 days (or so) in quarantine before his release home. What's screwed up about that is that the Acting Warden put out a memo five days later - on the 26th - saying that if you were fully vaccinated you no longer had to go to quarantine if you were being released. So, Nick got screwed.

I was not sorry to see him go. I was so tired of listening to his mouth all the time. We even got into an argument on his last night 'cause he did Suboxone (sp?) - his drug of choice - which makes him act like a complete asshole.

What's weird is, that after he left I semi-missed him. His ghost haunted the cell for the entire four weeks I was (blessedly) alone. We had a strange relationship. I expect that he will get a rude awakening in the Real World with all the BS & harassment he will face due to his charges, but I do wish him the best.

Back to COVID news ... in early November the Medical staff came around and gave flu shots and the COVID boosters. I originally got the Pfizer shot and others got the Moderna. They didn't tell us what the booster shots were and I don't know if it matters (does it?)

Back at work. Ugh. I thought that I only had to come in three nights on a part-time schedule but this is my fourth night. Not happy. Plus, tonight is the one night per week that my unit goes to the Library & I'm stuck here. This is screwing up my real job!

On Nov. 18th I was laying in bed reading when my new cellie showed up. He also got here during the lockdown/quarantine (like Nick), and I had seen him around a couple times and a few days before he arrived in my cell I was standing behind him in line at Chow & checking him out.
My new cellie's name is Devin. Unlike Nick's New Hampshire/Boston Yankee accent, Devin is from south Georgia and has a thick Southern twang. He's medium height, with dark brown hair and a beard. He's totally cute and he has a great personality & I like him a lot. Unlike Nick, I enjoy hanging out in the cell with Devin and we spend most of our free time doing just that. It's only been a month, and he definitely has a few faults, but for the most part I am smitten. I sure hope our relationship continues to run smoothly.

For the record, he's the main reason I broke down and got a job in the Kitchen so we could remain cellies. He moved over from C-South to work in the Kitchen.

Oh, in case you're wondering, my job (& Devin's) is working the serving line - so I scoop up whatever we're having and put it on a tray with a few other guys.
Also, for the curious, the C-North lanyard color is green. It's a nice color, but I would've preferre purple (C-South) or pink (E-North) C'est la vie.

I was supposed to be trading schedules with someone so I could be off on Wednesdays, but that never got taken care of. (shocker)
So...a bit of gossip I didn't mention. One of the guys who has moved down from D-North to my unit was one of my exes Mortal Enemies. It was that sociopath Doug from the Summer of '19 who ripper me off of that $112. (Psycho Bitch Piece of Shit!) He was originally in B-North, was moved to A-South around the time I was moved to C-North, then apparently got a job (or, had one as recall), in the kitchen. And since he works PM Kitchen, he was moved...and we are now co-workers. <Major Groan> And... he works the serving lines also and I have usually been placed right next to him! <Even More Major Groan>

I will say, that before I got the job he came by my cell and paid me in stampys the amount that he scammed out of me. I was in shock. I think that my saying "Pyscho" and "Thief" under my breath as he passed finally got to him. It is so rare to get paid back after being ripped off.

I am polite and professional at work, of course, but I'll never trust him.

I would like to send a big Thank you and Blessings & Hugs to those who posted comments during this period. I had been feeling really down and felt like I'd lost any support I may have had, and it meant a lot to me hear from someone.
I'm sorry I took so long to write, but your comments let me know that someone was still out there. Thank you so much.

Until next time, I wish you...
Love & Blessings,
[Signature]

Thanks for writing! I worked on the transcription for your post.
(scanned reply – view as blog post)
uploaded April 16, 2022.  Original (PDF) 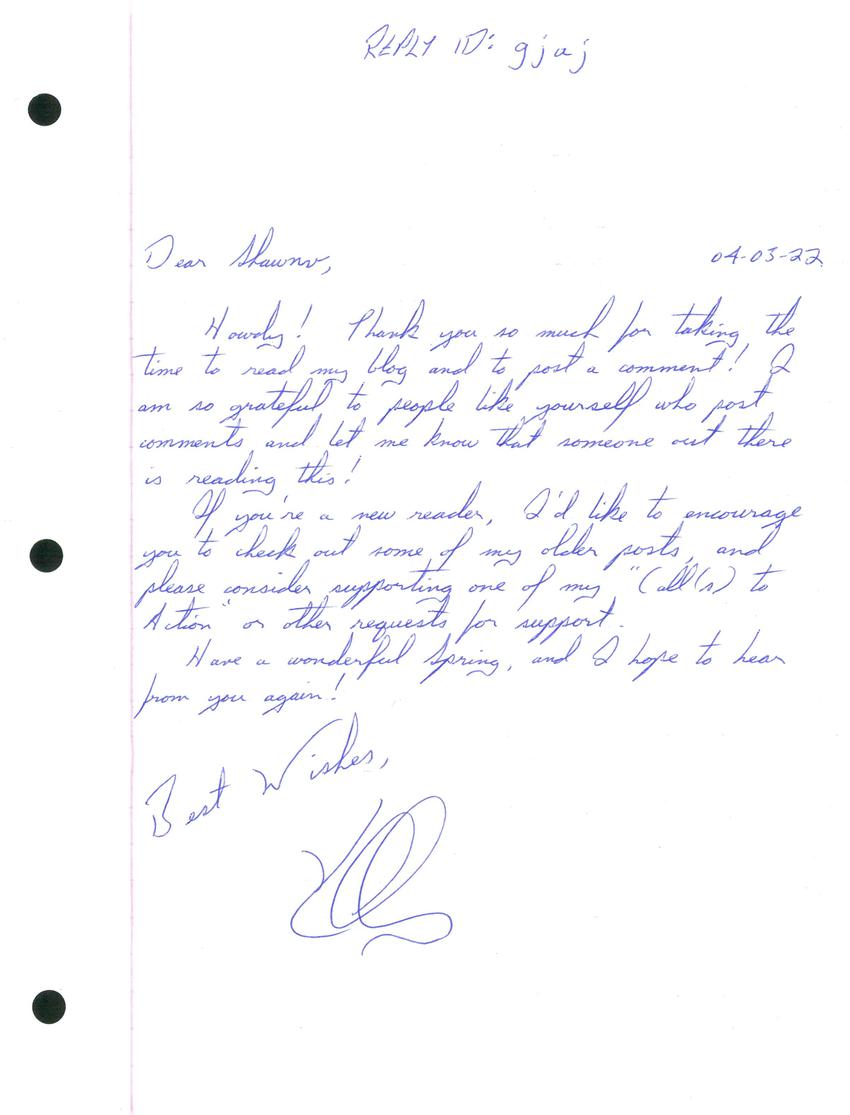