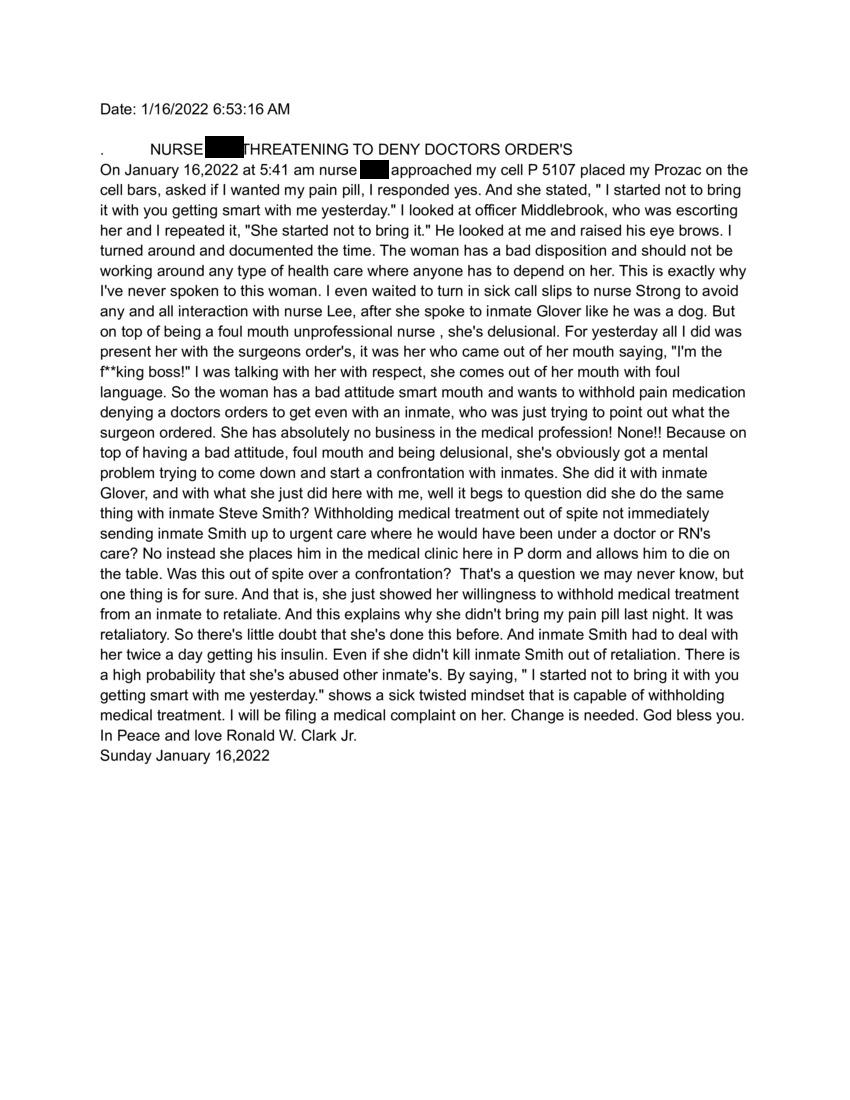 . NURSE [redacted] THREATENING TO DENY DOCTORS ORDER'S
On January 16,2022 at 5:41 am nurse [redacted] approached my cell P 5107 placed my Prozac on the cell bars, asked if I wanted my pain pill, I responded yes. And she stated, " I started not to bring it with you getting smart with me yesterday." I looked at officer Middlebrook, who was escorting her and I repeated it, "She started not to bring it." He looked at me and raised his eye brows. I turned around and documented the time. The woman has a bad disposition and should not be working around any type of health care where anyone has to depend on her. This is exactly why I've never spoken to this woman. I even waited to turn in sick call slips to nurse Strong to avoid any and all interaction with nurse Lee, after she spoke to inmate Glover like he was a dog. But on top of being a foul mouth unprofessional nurse , she's delusional. For yesterday all I did was present her with the surgeons order's, it was her who came out of her mouth saying, "I'm the f**cking boss!" I was talking with her with respect, she comes out of her mouth with foul language. So the woman has a bad attitude smart mouth and wants to withhold pain medication denying a doctors orders to get even with an inmate, who was just trying to point out what the surgeon ordered. She has absolutely no business in the medical profession! None!! Because on top of having a bad attitude, foul mouth and being delusional, she's obviously got a mental problem trying to come down and start a confrontation with inmates. She did it with inmate Glover, and with what she just did here with me, well it begs to question did she do the same thing with inmate Steve Smith? Withholding medical treatment out of spite not immediately sending inmate Smith up to urgent care where he would have been under a doctor or RN's care? No instead she places him in the medical clinic here in P dorm and allows him to die on the table. Was this out of spite over a confrontation? That's a question we may never know, but one thing is for sure. And that is, she just showed her willingness to withhold medical treatment from an inmate to retaliate. And this explains why she didn't bring my pain pill last night. It was retaliatory. So there's little doubt that she's done this before. And inmate Smith had to deal with her twice a day getting his insulin. Even if she didn't kill inmate Smith out of retaliation. There is a high probability that she's abused other inmate's. By saying, " I started not to bring it with you gettin smart with me yesterday." shows a sick twisted mindset that is capable of withholding medical treatment. I will be filing a medical complaint on her. Change is needed. God bless you.
In Peace and love Ronald W. Clark Jr.
Sunday January 16,2022