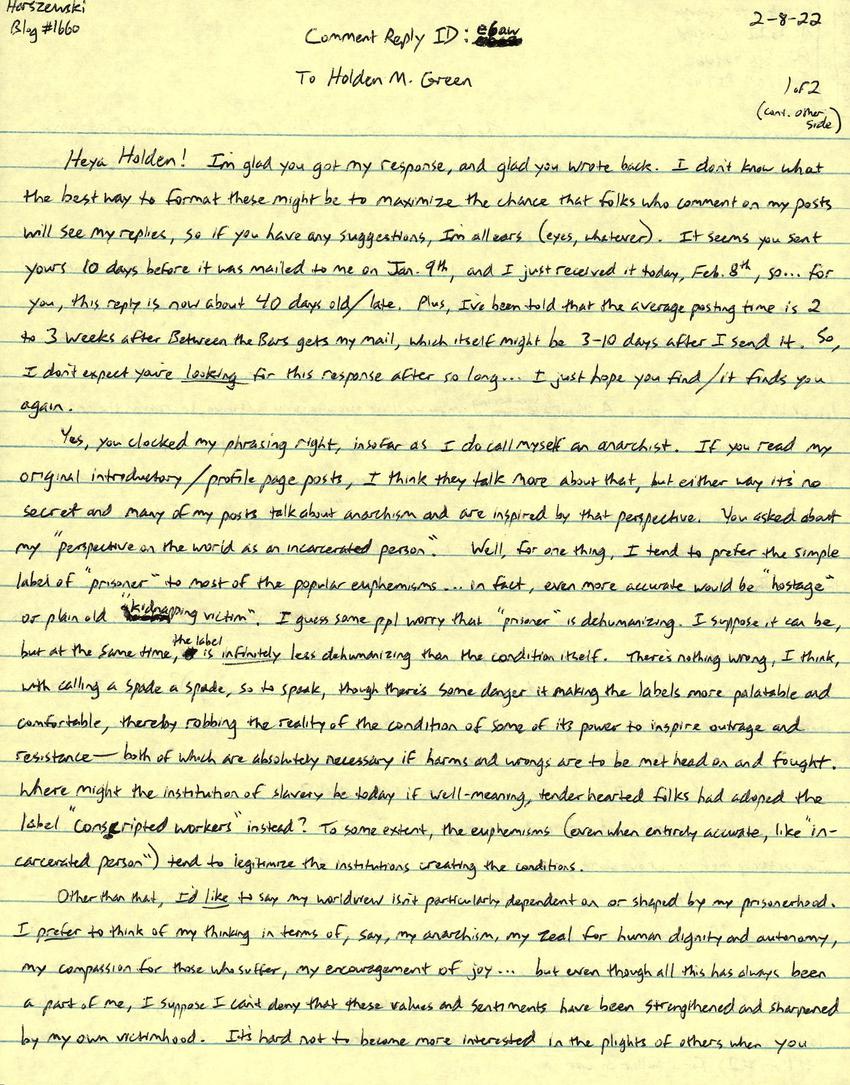 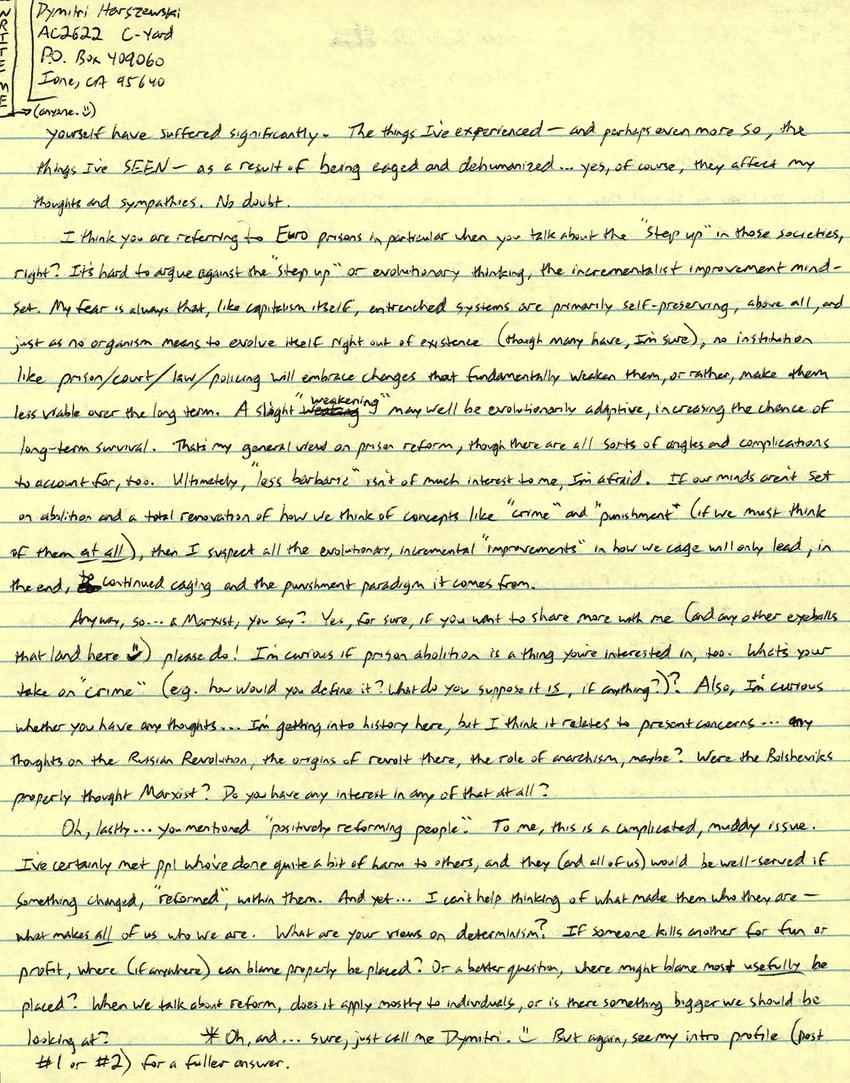 Heya Holden! I'm glad you got my response, and glad you wrote back. I don't know what the best way to format these might be to maximize the chance that folks who comment on my posts will see my replies, so if you have suggestions, I'm all ears (eyes, whatever). It seems you sent yours 10 days before it was mailed to me on Jan. 9th, and I just got it today, Feb. 8th, so...for you the reply is about 40 days old/late. Plus, I've been told that the average posting time is 2 to 3 weeks after Between the Bars gets my mail, which itself might be 3-10 days after I send it. So, I don't expect you're _looking_ for this response after so long... I hope you find it/it finds you again.

Yes, you clocked my phrasing right, insofar as I do call myself an anarchist. If you read my original introductory/profile page posts, I think they talk more about that, but either way it's no secret and many of my posts talk about anarchism and are inspired by that perspective. You asked about my "perspective on the world as an incarcerated person." Well, for one thing, I tend to prefer the simple label of "prisoner" to most of the popular euphemisms... in fact, even more accurate would be "hostage" or plain old "kidnapping victim". I guess some ppl worry that "prisoner" is dehumanizing. I suppose it can be, but at the same time, the label is _infinitely_ less dehumanizing than the condition itself. There's nothing wrong, I think, with calling a spade a spade, so to speak, though there is some danger in making the labels more palatable and comfortable, thereby robbing the reality of the condition of some of its power to inspire outrage and resistance -- both of which are absolutely necessary if harms and wrongs are to be met head on and fought. Where might the institution of slavery be today if well-meaning, tender-hearted folks had adopted the label "conscripted workers" instead? To some extent, the euphemisms (even when entirely accurate, like "incarcerated person") tend to legitimize the institutions creating the conditions. Other than that, I'd _like_ to say my worldview isn't particularly dependent on or shaped by my prisonerhood. I _prefer_ to think of my thinking in terms of, say, my anarchism, my zeal for human dignity and autonomy, my compassion for those who suffer, my encouragement of joy...but even though all this has always been a part of me, I suppose I can't deny that these values and sentiments have been strengthened and sharpened by my own victimhood. It's hard not to become more interested in the plights of others when you yourself have suffered significantly. The things I've experienced -- and perhaps even more so, the things I've SEEN -- as a result of being caged and dehumanized...yes, of course, they affect my thoughts and sympathies. No doubt.

I think you are referring to Euro prisons in particular when you talk about the "step up" in those societies, right? It's hard to argue against the "step up" or evolutionary thinking, the incrementalist improvement mindset. My fear is always that, like capitalism itself, entrenched systems are primarily self-preserving, above all, and just as no organism means to evolve itself right out of existence (though many have, I'm sure), no institution like prison/court/law/policing will embrace changes that fundamentally weaken them, or rather, make them less viable over the long term. A slight "weakening" may well be evolutionarily adaptive, increasing the chance of long-term survival. That's my general view on prison reform, though there are all sorts of angles and complications to account for, too. Ultimately, "less barbaric" isn't of much interest to me, I'm afraid. If our minds aren't set on abolition and a total renovation of how we think of concepts like "crime" and "punishment" (if we must think of them _at all_), then I suspect all the evolutionary, incremental "improvements" in how we cage will only lead, in the end, to continued caging and the punishment paradigm it comes from.

Anyway, so...a Marxist, you say?Yes, for sure, if you want to share more with me (and any other eyeballs that land here :) ) please do!! I'm curious if prison abolition is a thing you're interested in, too. What's your take on "crime" (e.g., how would you define it? what do you suppose it is, if anything?)? Also, I'm curious whether you have any thoughts...I'm getting into history here, but I think it relates to present concerns ...my thoughts on the Russian Revolution, the origins of revolt there, the role of anarchism, maybe? Where the Bolsheviks properly thought Marxist? Do you have any interest in any of that at all?

Oh, lastly...you mentioned "positively reforming people." To me, that is a complicated, muddy issue. I've certainly met ppl who've done quite a bit of harm to others, and they (and all of us) would be well-served if something changed, "reformed", within them. And yet...I can't help thinking of what made them who they are -- what makes _all_ of us who we are. What are your views on determinism? If someone kills another for fun or profit, where (if anywhere) can the blame be properly placed? Or a better question, where might blame most _usefully_ be placed? When we talk about reform, does it apply mostly to individuals, or is there something bigger we should be looking at? *Oh and...sure, just call me Dymetri. :) But again, see my intro profile (post #1 or #2) for a fuller answer.