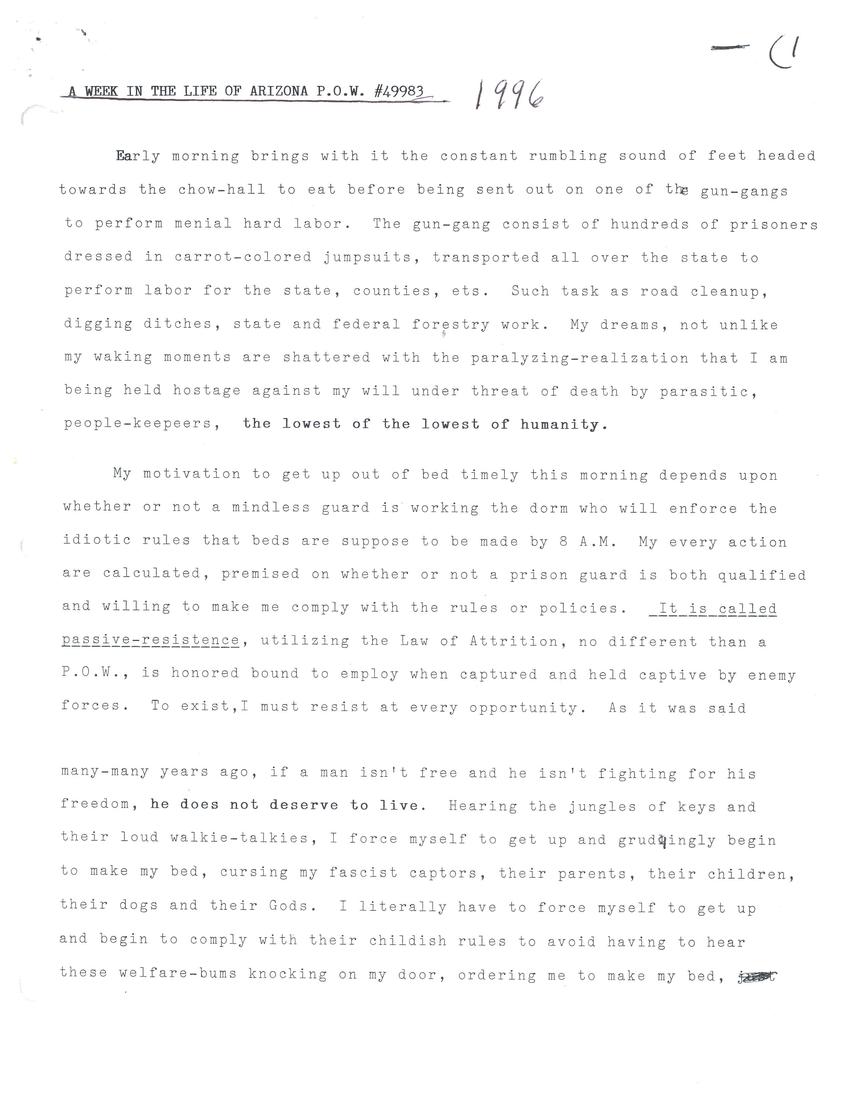 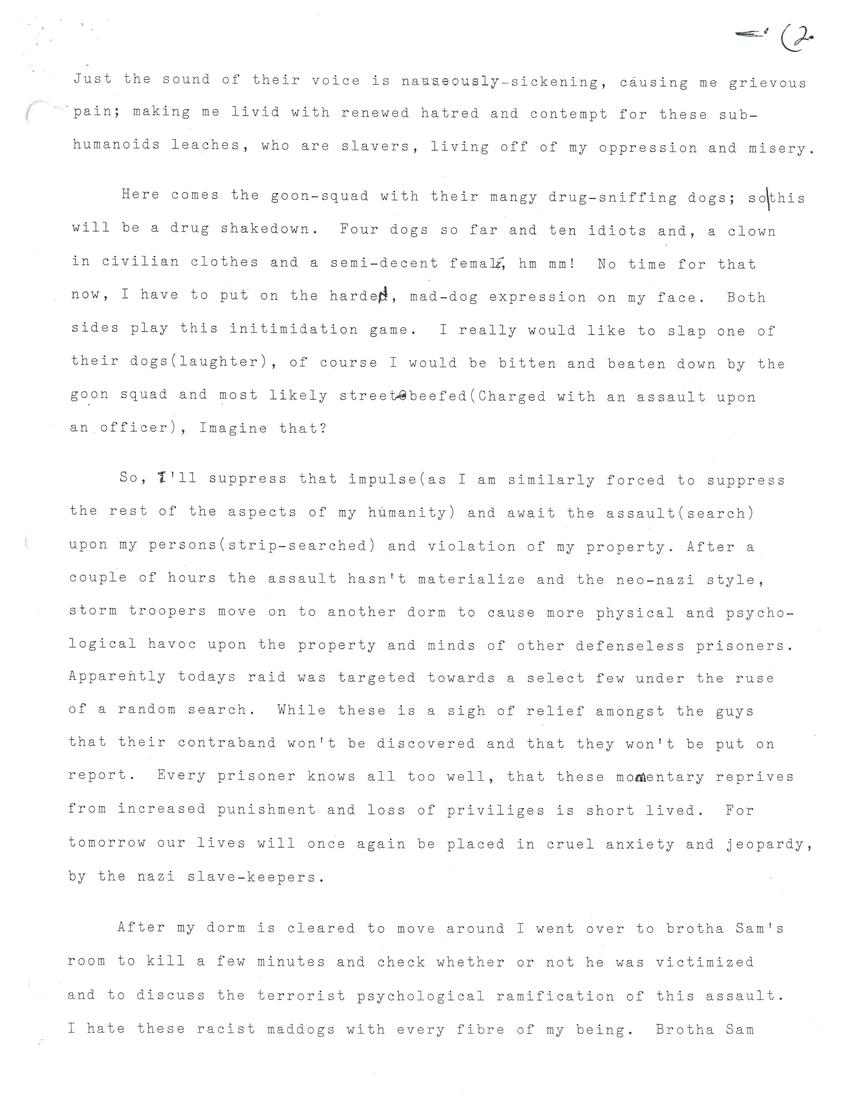 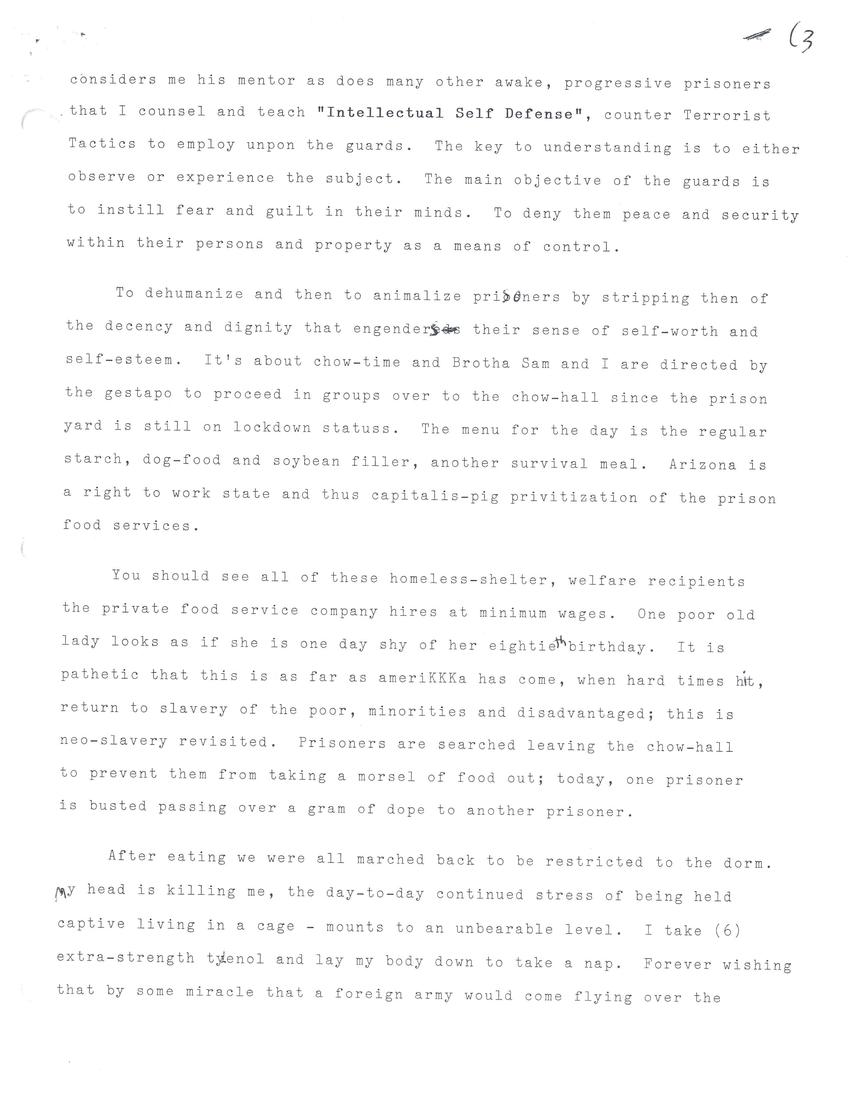 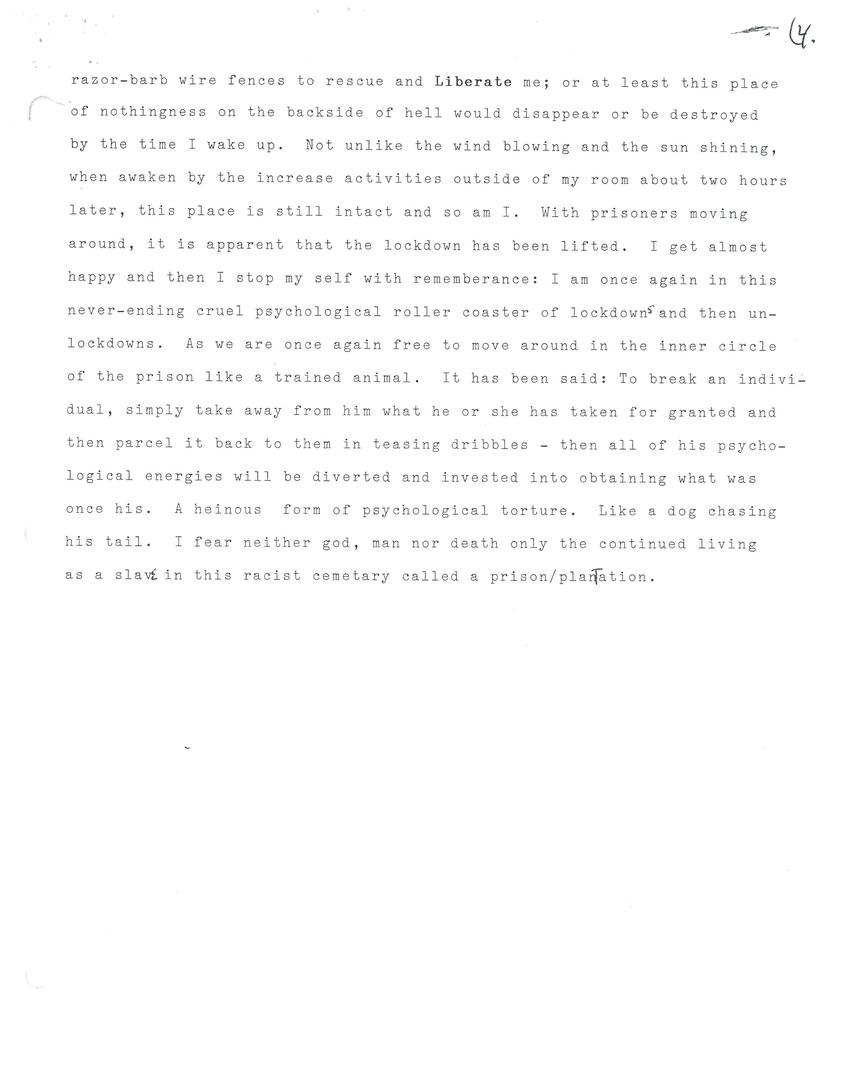 Early morning brings with it the constant rumbling sound of feet headed toward the chow-hall to eat before being sent out on one of the gun-gangs to perform menial hard labor. The gun-gang consist of hundreds of prisoners dressed in carrot-colored jumpsuits, transported all over the state to perform labor for the state, counties, etc. Such task as road cleanup, digging ditches, state and federal forestry work. My dreams, not unlike my waking moments are shattered with the paralyzing-realization that I am being held hostage against my will under threat of death by parasitic, people-keepers, the lowest of the lowest of humanity.

My motivation to get up out of bed timely this morning depends upon whether or not a mindless guard is working the dorm who will enforce the idiotic rules that beds are suppose to be made by 8 A.M. My every action are calculated, premised on whether or not a prison guard is both qualified and willing to make me comply with the rules of politics. It is called passive-resistance, utilizing the Law of Attrition, no different than a P.O.W., is honored bound to employ when captured and held captive by enemy forces. To exist, I must resist at every opportunity. As it was said many-many years ago, if a man isn't free and he isn't fighting for his freedom, he does not deserve to live. Hearing the jungles of keys and their loud walkie-talkies, I force myself to get up and gruddingly begin to make my bed, cursing my fascist captors, their parents, their children, their dogs and their Gods. I literally have to force myself to get up and begin to comply with their childish rules to avoid having to hear these welfare-bums knocking on my door, ordering me to make my bed. Just the sound of their voice is nauseously-sickening, causing me grievous pain; making me livid with renewed hatred and contempt for these subhumanoids leaches, who are slavers, living off of my oppression and misery.

Here comes the goon-squad with their mangy drug-sniffing dogs; so this will be a drug shakedown. Four dogs so far and ten idiots and, a clown in civilian clothes and a semi-decent femal, hm mm! No time for that now, I have to put on the harde, mad-dog expression on my face. Both sides play this intimidation game. I really would like to slap one of their dogs(laughter), of course I would be bitted and beaten down by the good quad and most likely street beefed (Charged with assault upon an officer), imagine that?

So, I'll suppress that impulse (as I am similarly forced to suppress the rest of the aspects of my humanity) and await the assault (search) upon my persons (strip-searched) and violation of my property. After a couple of hours the assault hasn't materialize and the neo-nazi style, storm troopers move on to another dorm to cause more physical or psychological havoc upon the property and minds of other defenseless prisoners. Apparently todays raid was targeted towards a select few under the ruse of a random search. While there is a sigh of relief aongst the guys that their contraband won't be discovered and that they won't be put on report. Every prisoner knows all too well, that these momentary reprives from increased punishment and loss of priviliges is short lived. For tomorrow our lives will once again be placed in cruel anxiety and jeopardy, by the nazi slave keepers.

After my dorm is cleared to move around I went over to brotha Sam's room to kill a few minutes and check whether or not he was victimized and to discuss the terrorist psychological ramification of this assault. I hate these racist maddogs with every fibre of my being. Brotha Sam considers me his mentor as does many other awake, progressive prisoners that I counsel and teach "Intellectual Self Defense", counter Terrorist Tactics to employ unpon the guards. The key to understanding is to either observe or experience the subject. The main objective of the guards is to instill fear and guilt in their minds. To deny them peace and security within their persons and property as a means of control.

To dehumanize and then animalize prisoners by stripping then of the decency and dignity that engenders their sense of self-worth and self-esteem. It's about chow-time and Brotha Sam and I are directs by the gestapo to proceed in groups over to the chow-hall since the prison yard is still on lockdown statuss. The menu for the day is the regular starch, dog-food and soybean filler, another survival meal. Arizona is a right to work state and thus capitilis-pig privitization of the prison food services.

You should see all of these homeless-shelter, welfare recipients the private food service company hires at minimum wages. One poor old lady looks as if she is one day shy of her eightieth birthday. It is pathetic that this is as far as ameriKKKa has come, when hard times hit, return to slavery of the poor, minorities and disadvantages; this is neo-slavery revisited. Prisoners are searched leaving the chow-hall to prevent them from taking a morsel of food out; today, one prisoner is busted passing over a gram of dope to another prisoner.

After eating we were all marched back to be restricted to the dorm. My head is killing me, the day-to-day continued stress of being held captive living in a cage - mounts to an unbearable level. I take (6) extra-strength tylenol and lay my body down to take a nap. Forever wishing that by some miracle that a foreign army would come flying over the razor-barb wire fences to rescue and Liberate me; or at least this place of nothingness on the backside of hell would disappear or be destroyed by the time I wake up. not unlike the wind blowing and the sun shining, when awaken by the increase activities outside of my room about two hours later; this place is still intact and so am I. With prisoners moving around, it is apparent that the lockdown has been lifted. I get almost happy and then I stop my self with remembrance; I am once again in this never-ending cruel psychological roller coaster of lockdowns and then un-lockdowns. As we are once again free to move around in the inner circle of the prison like a trained animal. It has to be said: To break an individual, simply take away from him what he or share has taken for granted and then parcel it back to them in teasing dribbles - then all of his psychological energies will be diverted and invested into obtaining what was once his. A heinous form of psychological torture. Like a dog chasing his tail. I fear neither god, man nor death only the continued living as a slave in this racist cemetery called a prison/plantation.