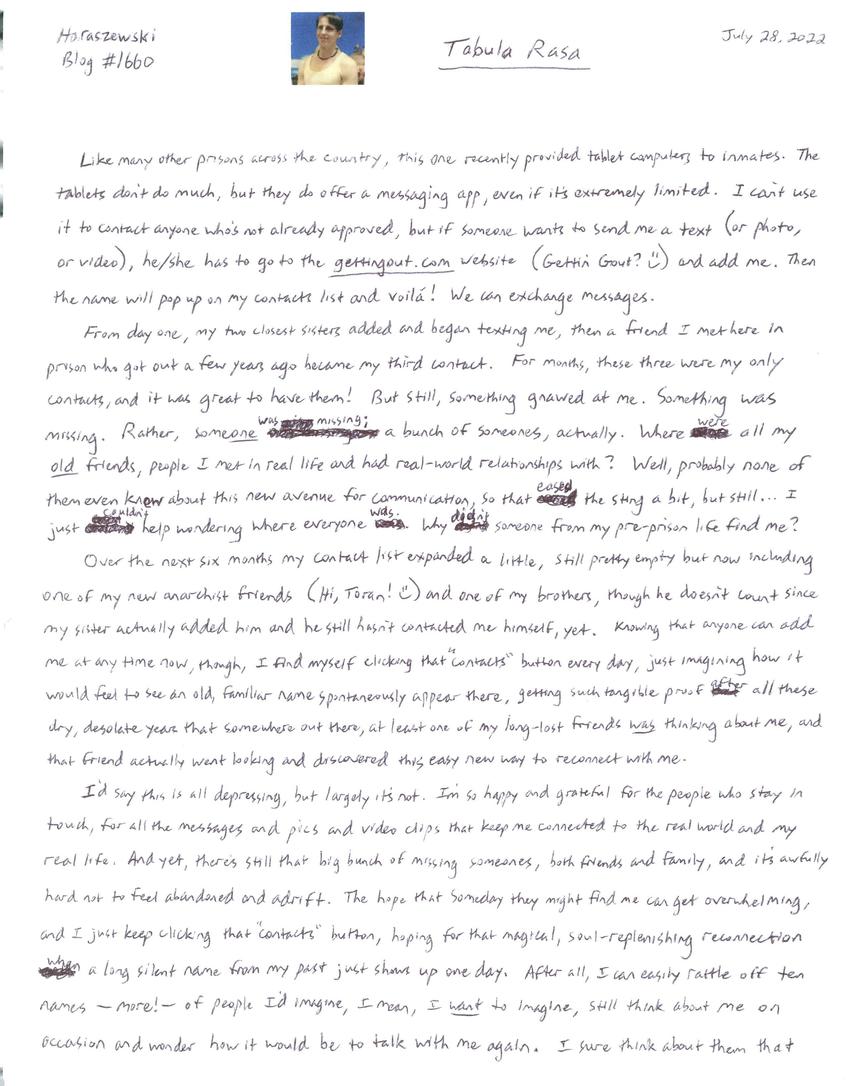 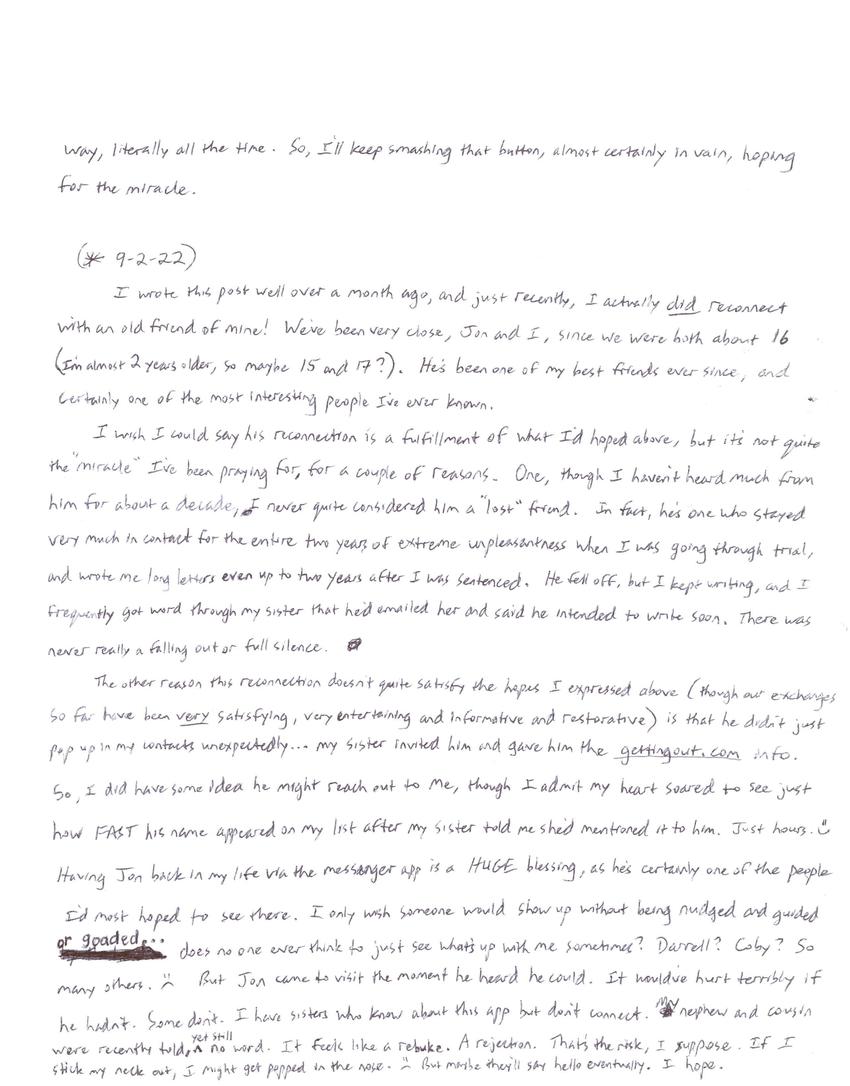 Like many other prisons across the country, this one recently provided tablet computers to inmates. The tablets don't do much, but they do offer a messaging app, even if it's extremely limited. I can't use to contact anyone who's not already approved, but if someone wants to send me a text (or photo, or video), he/she gas to go to the gettingout.com website (Getting Gout? :)) and add me. Then my name will pop up on my contacts list and voila! We can exchange messages.

From day one, my two closest sisters added and began texting me, then a friend I met here in prison who got out a few years ago became my third contact. For months, these three were my only contacts, and it has great to have them! But still, something gnawed at me. Something was missing. Rather, someone was missing; a bunch of someones, actually. Where were all my old friends, people I met in real life and had real world relationships with? Well, probably none of them even knew about this new avenue for communication, so that eased the sting a little bit, but still... I just couldn't help wondering where everyone was. Why didn't someone from my pre-prison life find me?

Over the next six months my contact list expanded a little, still pretty empty but now one of my new anarchist friends (Hi Toran! :)) and one of my brothers, though he doesn't count since my sister actually added him and he still hasn't contacted me himself, yet. Knowing that anyone can add me at any time now, though, I found myself clicking that "contacts" button every day, just imagining how it would feel to see an old, familiar name spontaneously appear there, getting such tangible proof after all these dry, desolate years that someone out there, at least one of my long-lost friends was thinking about me, and that friend actually went looking and discovered this easy new way to connect with me.

I'd say this is all depressing, but largely it's not. I'm so happy and grateful for the people who stay in touch, for all the messages and pics and video clips that keep me connected to the real world and my real life. And yet, there's still that big bunch of missing someones, both friends and family, and it's awfully hard not to feel abandoned and adrift. The hope that someday they might find me can get overwhelming, and I just keep clicking that "contacts" button, hoping for that magical, soul-replenishing connection when a long silent name from my past just shows up one day. After all, I can easily rattle off ten names - more! - of people I'd imagine, I mean, I want to imagine, still think about me on occasion and wonder how it would be to talk with me again. I sure think about them that way, literally all the time. So,. I'll keep smashing that button, almost certainly in vain, hoping for the miracle.

I wrote this post over a month ago and just recently, I actually did reconnect with an old friend of mine! We've been very close, Jon and I, since we were both about 16 (I'm almost 2 years older, so maybe 15 and 17?). He's been one of my best friends ever since, and certainly one of the most interesting people I've ever known.

I wish I could say his reconnection is a fulfillment of what I'd hoped above, but it's not quite the "miracle" I've been praying for, for a couple of reasons. One, though I haven't heard much from him for about a decade, I never quite considered him a "lost" friend. In fact, he's one who stayed very much in contact for the entire two years of extreme unpleasantness when I was going through trial, and wrote me long letters even up to two years after I was sentenced. He fell off, but I kept writing, and I frequently got word through my sister he'd emailed her and said he intended to write soon. There was never really a falling out or silence.

The other reason this reconnection doesn't quite satisfy the hopes I expressed above (though our exchanges so far have been very satisfying, very entertaining and informative and restorative) is that he didn't just pop up in my contacts unexpectedly... my sister invited him and gave him the gettingout.com info. So, I did have some idea he might reach out to me, though I admit my hear soared to see just how FAST his name appeared on my list after my sister told me she'd mention it to him. Just hours. :) Having Jon back in my life via the messenger app is a HUGE blessing, as he's certainly one of the people I'd most hoped to see there. I only wish someone would show up without being nudged and guided or goaded... does no one ever think to just see what's up with me sometimes? Darrell? Coby? So many others. :( But Jon came to visit the moment he heard he could. It would've hurt terribly if he hadn't. Some don't. I have sisters who know about this app but don't connect. My nephew and cousin were recently told, yet still no word. It feels like a rebuke. A rejection. That's the risk I suppose. If I stick my neck out, I might get popped in the nose. :( But maybe they'll say hello eventually. I hope.

Thanks for writing! I worked on the transcription for your post. You're a very talented writer and I enjoyed your post!
Dear Dymitri,

I just finished the transcription of your beautifully written and touching letter.