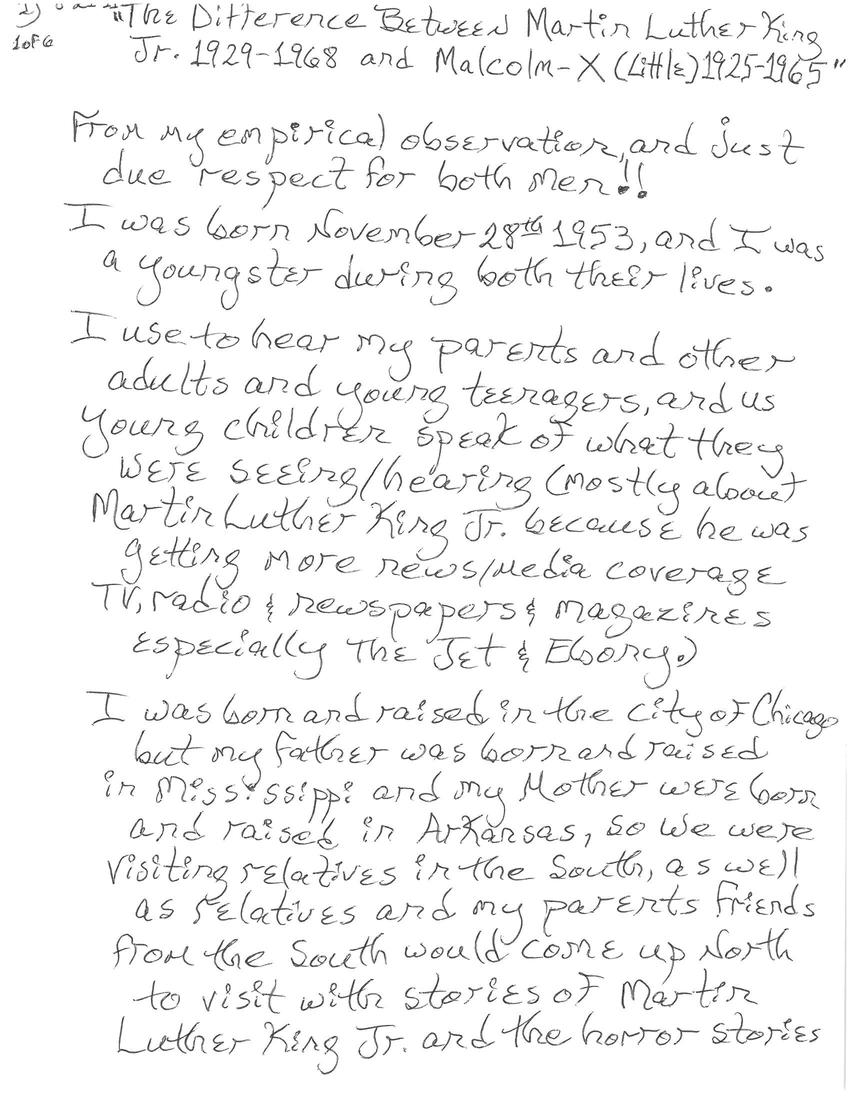 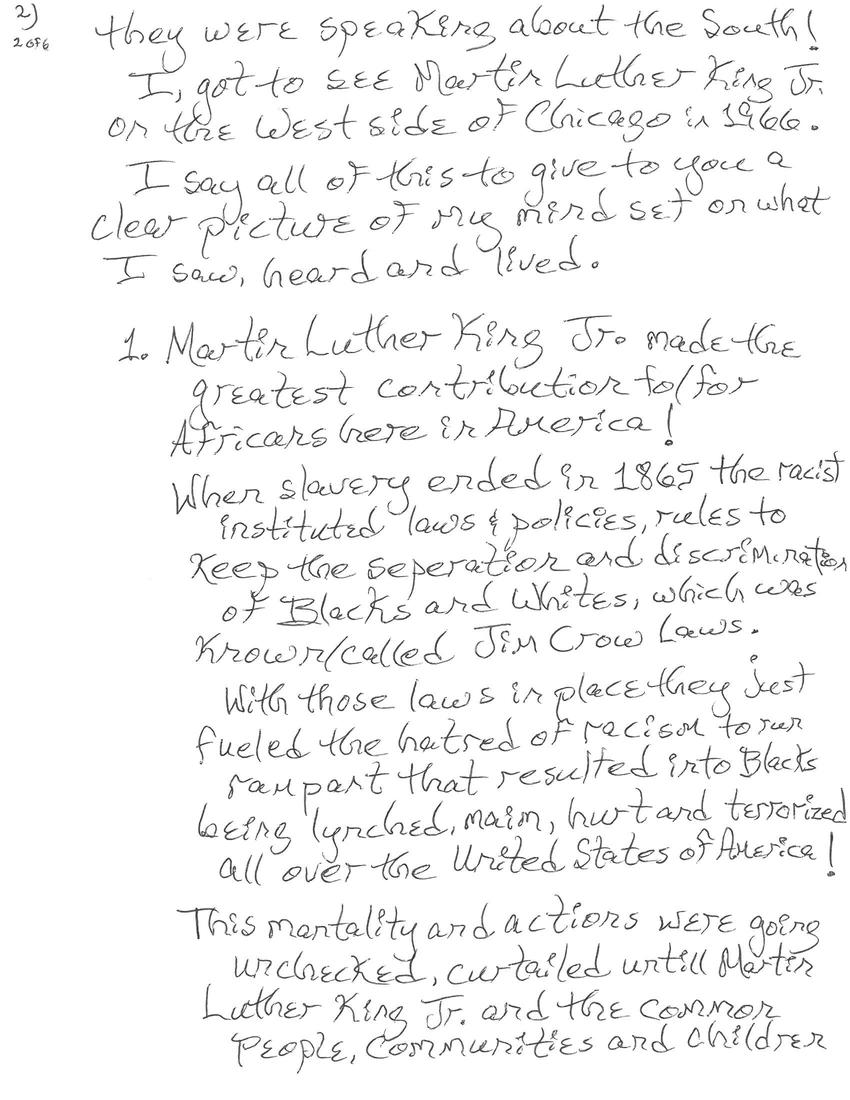 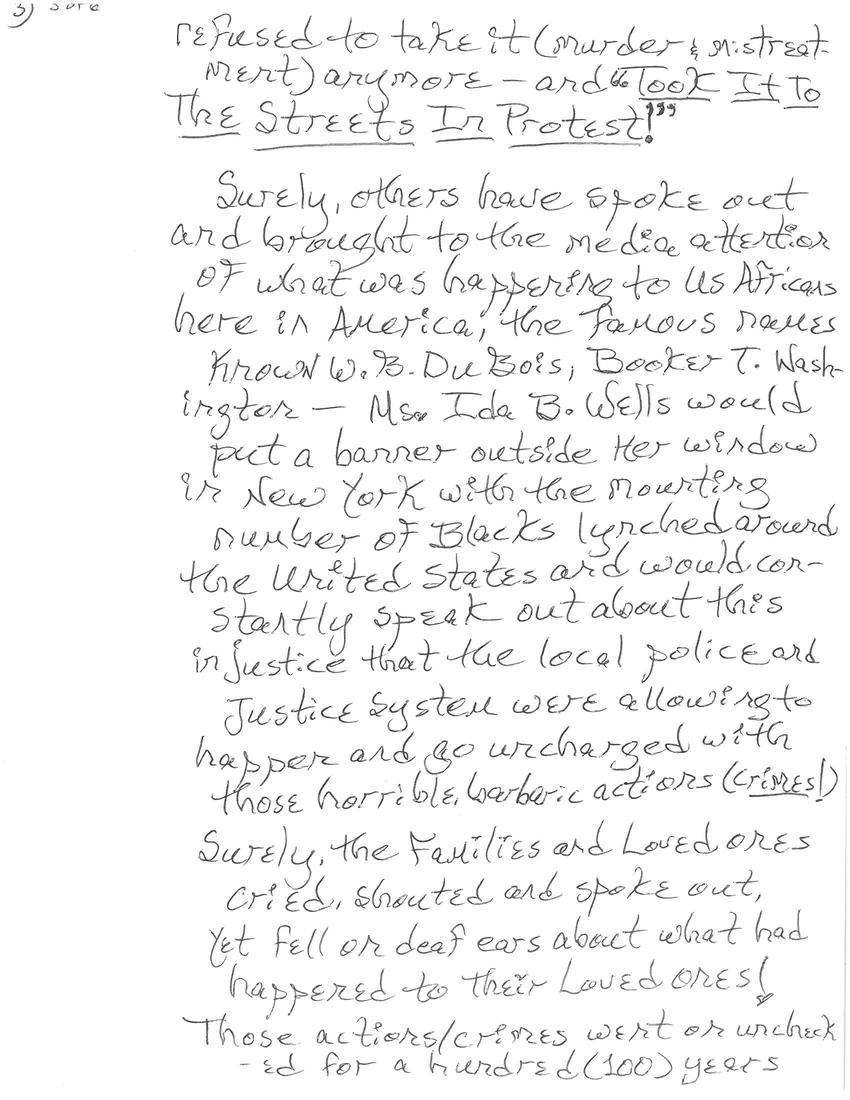 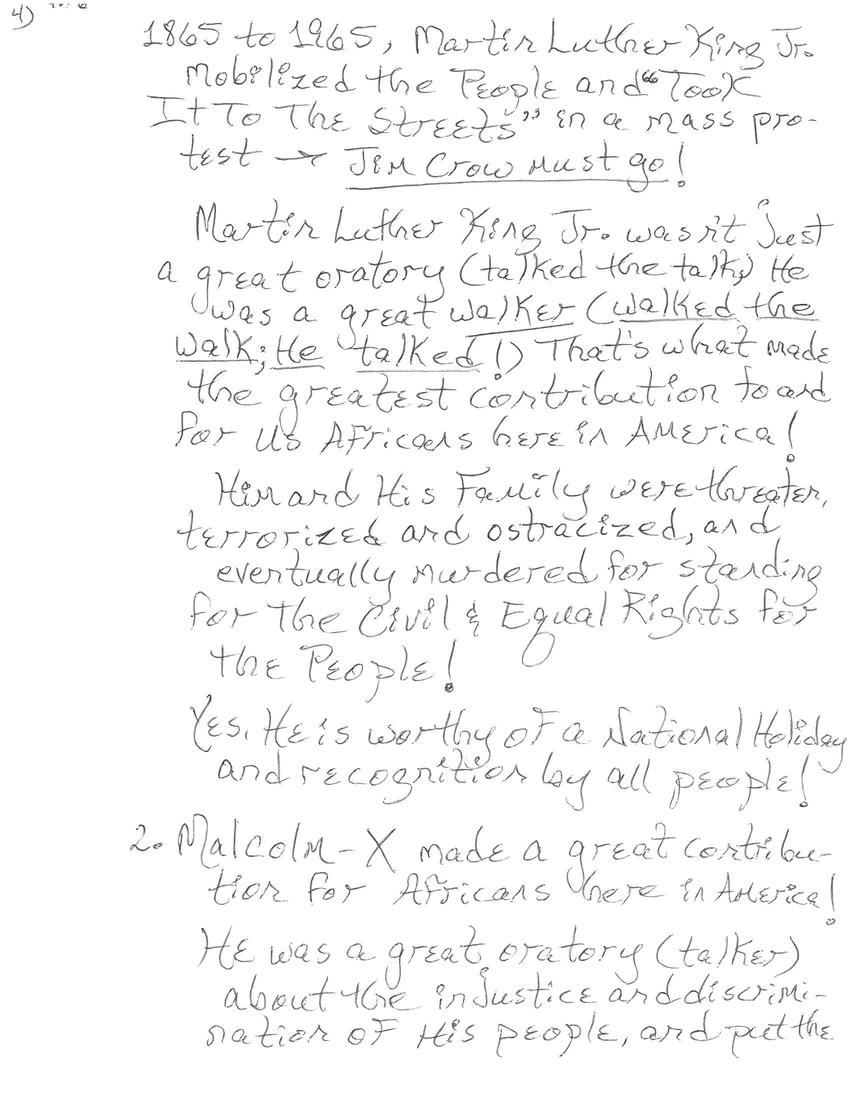 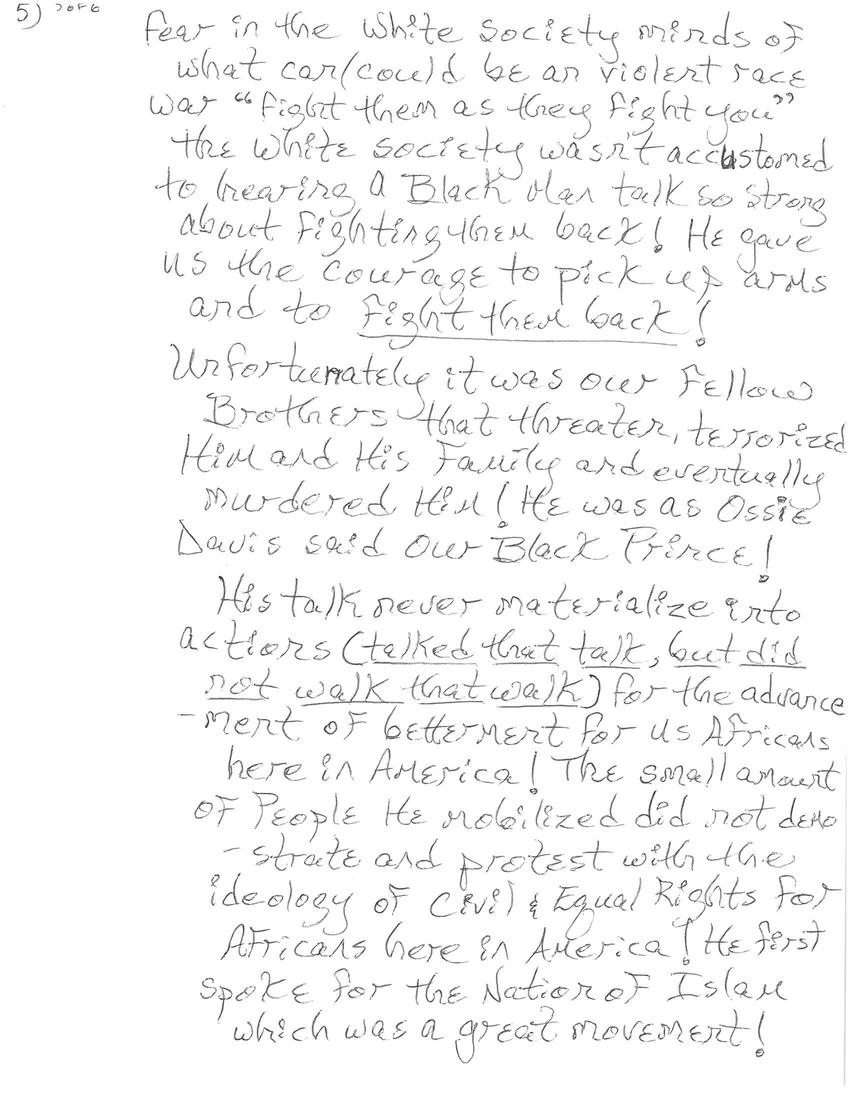 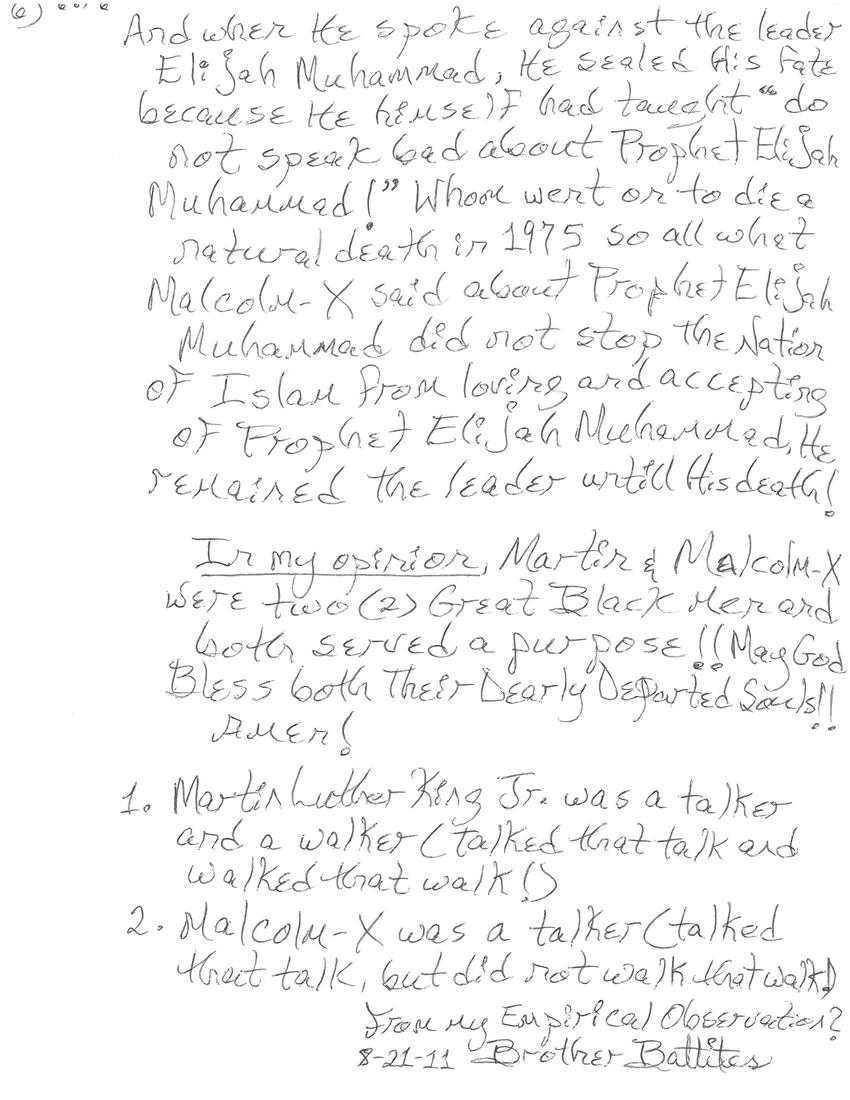 From my empirical observation, and just due respect for both men!!
I was born November 28th 1953, and I was a youngster during both their lives.
I used to hear my parents and other adults and young teenagers, and us young children speak of what they were seeing/hearing (mostly about Martin Luther King Jr. because he was getting more news/media coverage TV, radio & newspapers & magazines especially The Jet & Ebony.)
I was born and raised in the City of Chicago but my father was born and raised in Mississippi and my Mother were born and raised in Arkansas, so we were visiting relatives in the South, as well as relatives and my parents friends from the South would come up North to visit with stories of Martin Luther King Jr. and the horror stories they were speaking about the South! I, got to see Martin Luther King Jr. on the West side of Chicago in 1966. I say all of this to give to you a clear picture of my mind set on what I saw, heard and lived.
1. Martin Luther King Jr. made the greatest contribution to/for Africans here in America! When slavery ended in 1865 the racist instituted laws and policies, rules to keep the separation and discrimination of Blacks and Whites, which was known/called Jim Crow Laws. With those laws in place they just fuelled the hatred of racism to run rampart that resulted into Blacks being lynched, maim, hurt and terrorized all over the United States of America!
This mentality and actions were going unchecked, curtailed until Martin Luther King Jr. and the common people, communities and children refused to take it (murder & mistreatment) anymore - and "Took It To The Streets In Protest!"
Surely, others have spoke out and brought to the media attention of what was happening to us Africans here in America, the famous names known W.B.DuBois, Booker T. Washington - Ms. Ida B. Wells would put a banner outside her window in New York with the mounting number of Blacks lynched around the United States and would constantly speak out about this in justice that the local police and justice system were allowing to happen and go uncharged with those horrible, barbaric actions (crimes!) Surely, the families and loved ones cried, shouted and spoke out, yet fell on deaf ears about what had happened to their loved ones! Those actions/crimes went on unchecked for a hundred (100) years 1865-1965, Martin Luther King Jr. mobilized the people and "Took It To The Streets" in a mass protest --> Jim Crow must go!
Martin Luther King Jr. wasn't just a great oratory (talked the talk,) he was a great walker (walked the walk; he talked!) That's what made the greatest contribution to and for us Africans here in America!
Him and his family were threatened, terrorized and ostracized, and eventually murdered for standing for the Civil & Equal Rights for the People! Yes, he is worthy of a National Holiday and recognition by all people!

2. Malcolm-X made a great contribution for Africans here in America! He was a great oratory (talker) about the injustice and discrimination of his people, and put the fear in the white society minds of what can/could be a violent race war "fight them as they fight you" the white society wasn't accustomed to hearing a Black man talk so strong about fighting them back! He gave us the courage to pick up arms and to fight them back! Unfortunately it was our fellow brothers that threatened, terrorized him and his family and eventually murdered him! He was as Ossie Davis said our Black Prince! His talk never materialize into actions (talked that talk, but did not walk that walk) for the advancement of betterment for us Africans here in America! The small amount of people he mobilized did not demonstrate and protest with the ideology of Civil & Equal Rights for Africans here in America! He first spoke for the Nation of Islam which was a great movement! And when he spoke against the leader Elijah Muhammad, he sealed his fate because he himself had taught "do not speak bad about Prophet Elijah Muhammad!" Whom went on to die a natural death in 1975 so all what Malcolm-X said about Prophet Elijah Muhammad did not stop the Nation of Islam from loving and accepting of Prophet Elijah Muhammad, he remained the leader until his death!

In my opinion, Martin & Malcolm-X were two (2) Great Black men and both served a purpose!! May God bless both their dearly departed souls!! Amen!