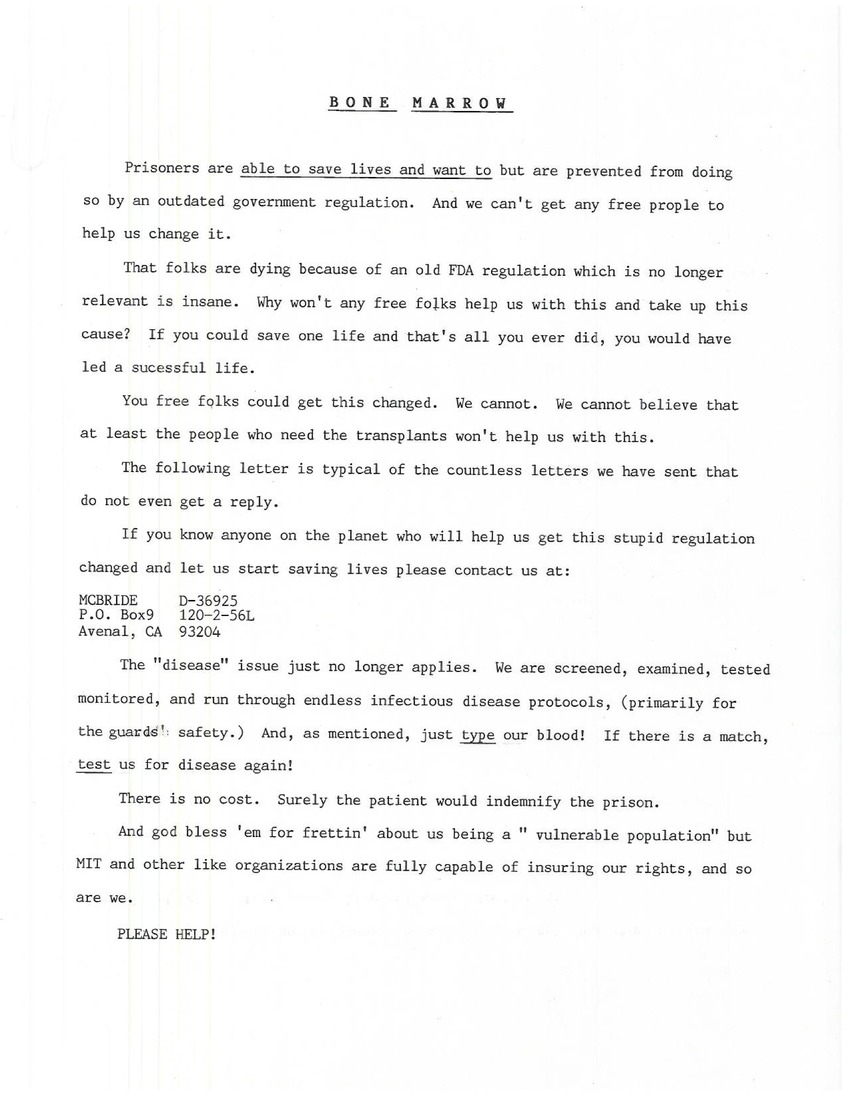 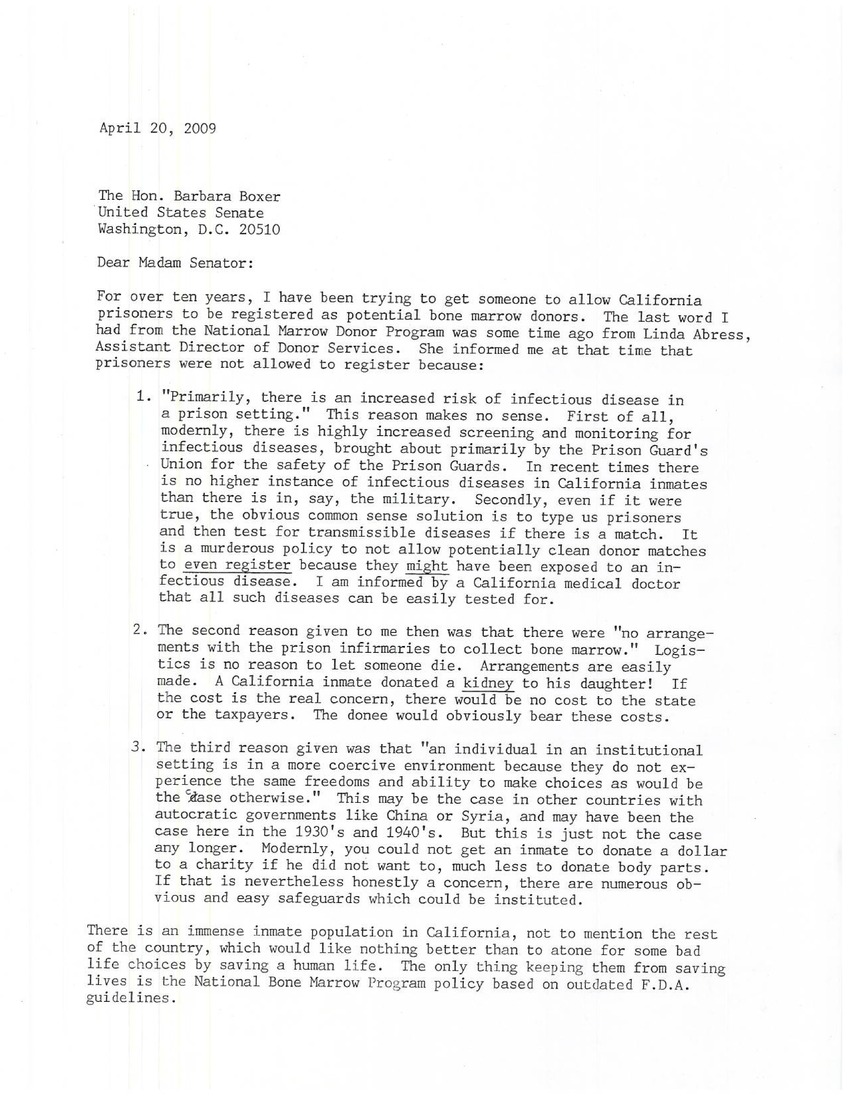 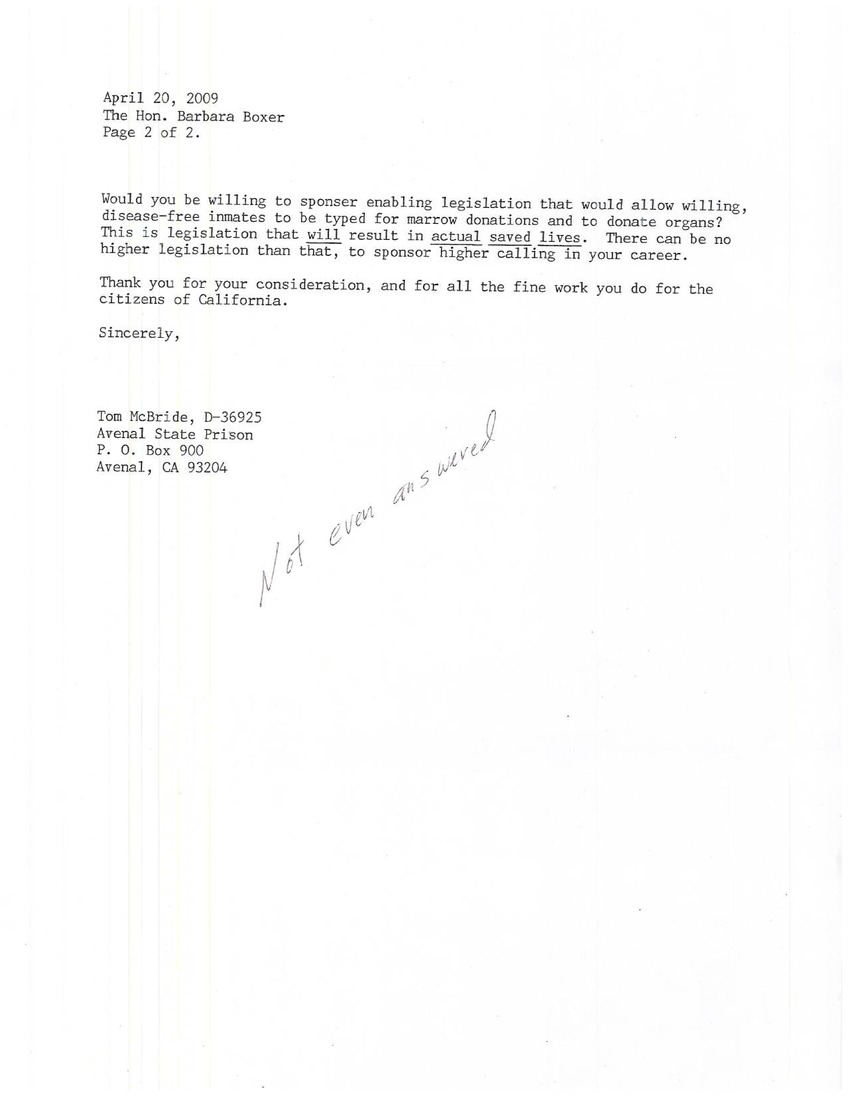 Prisoners are able to save lines and want to but are prevented from doing so by an outdated government regulation. And we can't get any free people to helps us change it.
That folks are dying because of an old FDA regulation which is no longer relevant is insane. Why won't any free folks help us with this and take up this cause? If you could save one life and that's all you ever did, you would have led a successful life.
You free folks could get this changed. We cannot. We cannot believe that at least the people who need the transplants won't help us with this.
The following letter is typical of the countless letters we have sent that do not even get a reply.
If you know anyone on the planet who will help us get this stupid regulation changed and let us start saving lives please contact us at:

The "disease" issue just no longer applies. We are screened, examined, tested monitored, and run through endless infectious disease protocols, (primarily for the guards' safety.) And, as mentioned, just type our blood! If there is a match, test us for disease again!
There is no cost. Surely the patient would indemnify the prison.
And god bless 'em for frettin' about us being a "vulnerable population" but MIT and other like organizations are full capable of insuring our rights, and so are we.

For over ten years, I have been trying to get someone to allow California prisoners to be registered as potential bone marrow donors. The last word I had from the National Marrow Donor Program was some time ago from Linda Abress, Assistant Director of Donor Services. She informed me at that time that prisoners were not allowed to register because:

1. "Primarily, there is an increased risk of infectious disease in a prison setting." This reason makes no sense. First of all, modernly, there is highly increased screening and monitoring for infectious diseases, brought about primarily by the Prison Guard's Union for the safety of the Prison Guards. In recent times there is no higher instance of infectious diseases in California inmates than there is in, say, the military. Secondly, even if it were true, the obvious common sense solution is to type us prisoners and then test for transmissible diseases if there is a match. It is a murderous policy to not allow potentially clean donor matches to even register because they might have been exposed to an infectious disease. I am informed by a California medical doctor that all such diseases can be easily tested for.

2. The second reason given to me then was that there were "no arrangements with the prison infirmaries to collect bone marrow." Logistics is no reason to let someone die. Arrangements are easily made. A California inmate donated a kidney to his daughter! If the cost is the real concern, there would be no cost to the state or the taxpayers. The donee would obviously bear these costs.

3. The third reason given was that "an individual in an institutional setting is in a more coercive environment because they do not experience the same freedoms and ability to make choices as would be the case otherwise." This may be the case in other countries with autocratic governments like China or Syria, and may have been the case here in the 1930's and 1940's. But this is just not the case any longer. Modernly, you could not get an inmate to donate a dollar to charily if he did not want to, much less to donate body parts. If that is nevertheless honestly a concern, there are numerous obvious and easy safeguards which could be instituted.

There is an immense inmate population in California, not to mention the rest of the country, which would like nothing better than to atone for some bad life choices by saving a human life. The only thing keeping them from saving lives is the National Bone Marrow Program policy based on outdated F.D.A. guidelines.

Thank you for your consideration, and for all the fine work you do for the citizens of California.

(a handwritten note on the letter to Barbara Boxer: "Not even answered")