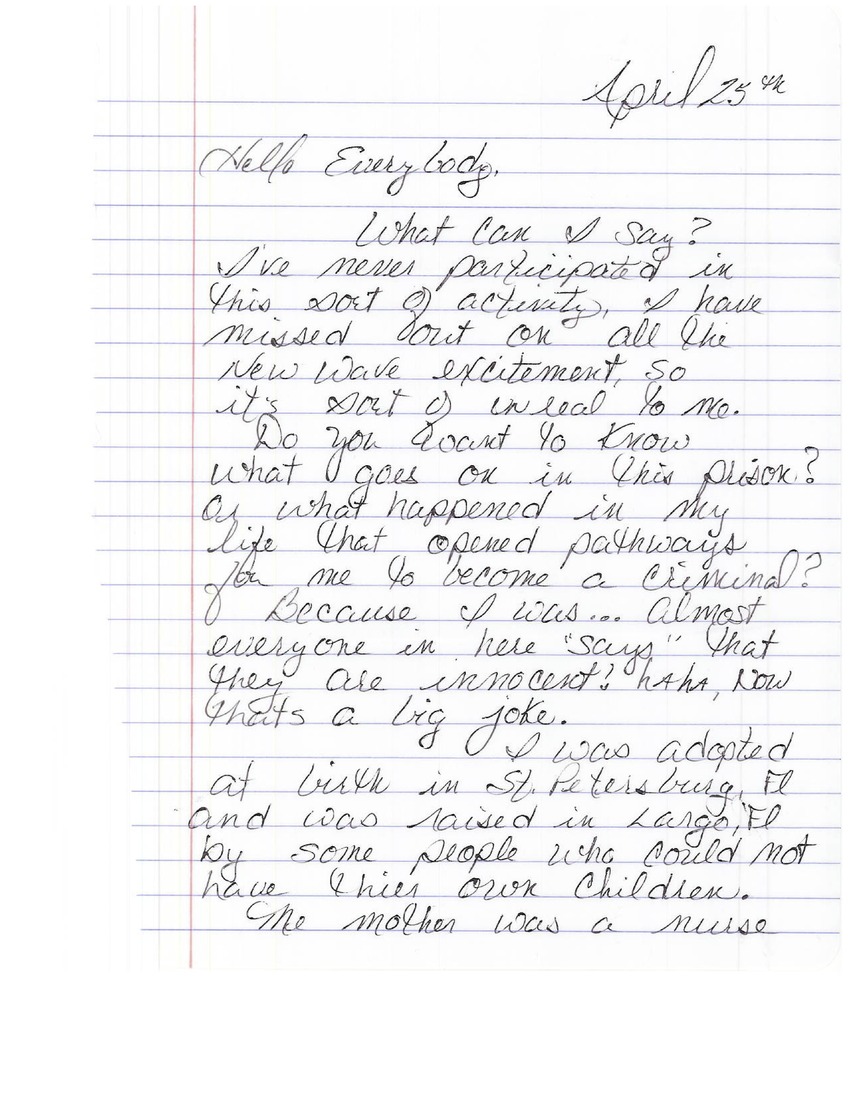 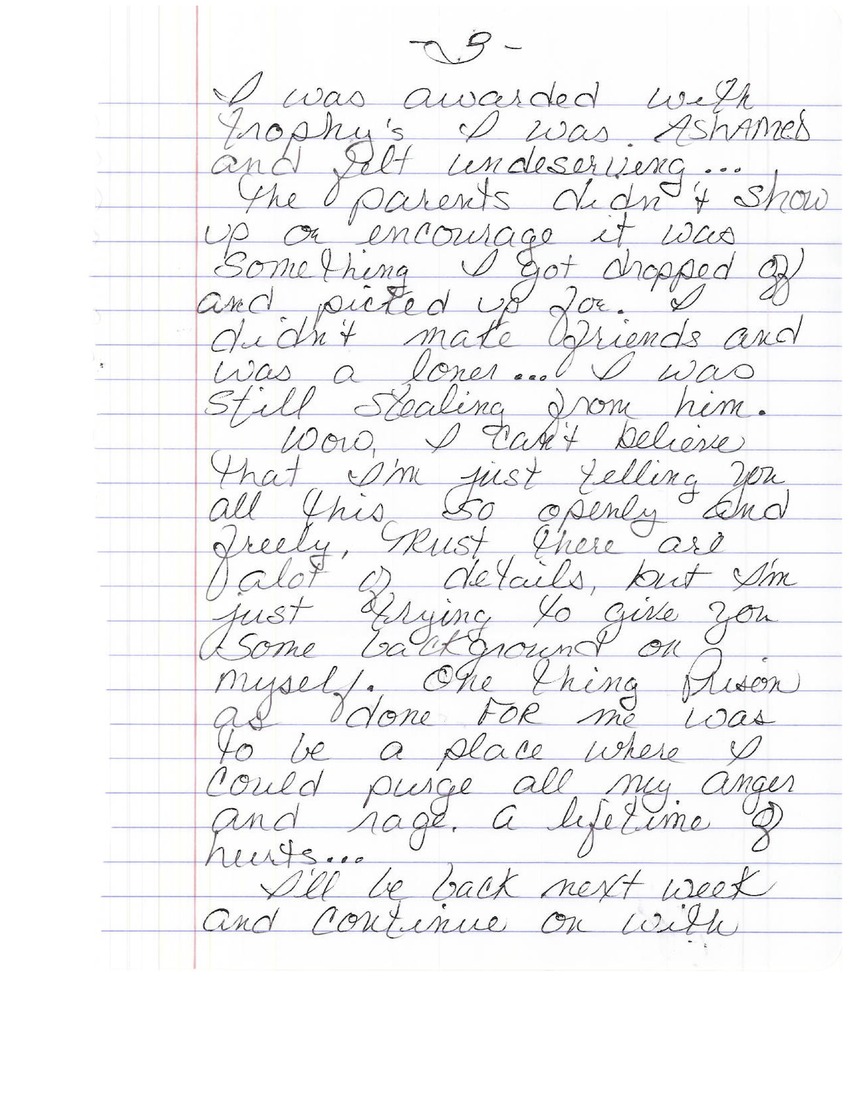 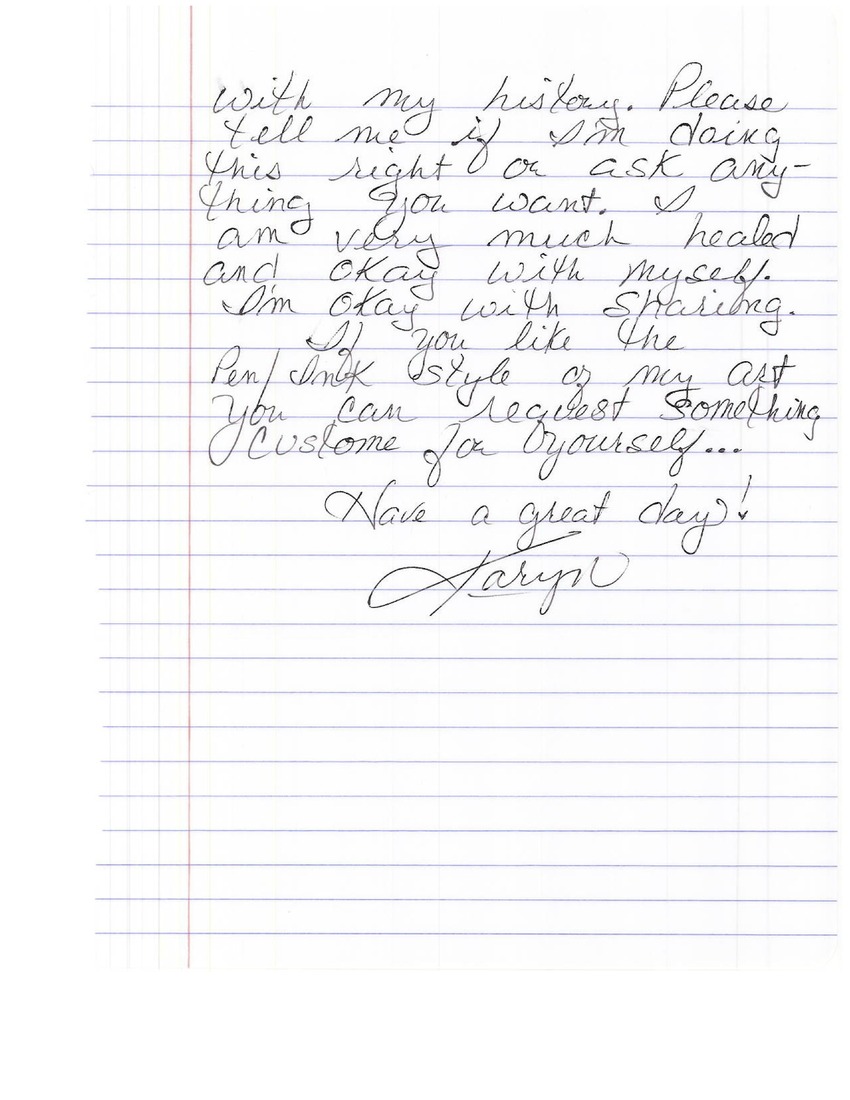 Hello Everybody,
What can I say? I've never participated in this sort of activity. I have missed out on all the new wave excitement, so it's sort of unreal to me.

Do you want to know what goes on in this prison? Or what happened in my life that opened pathways for me to become a criminal? Because I was...
Almost everyone in here "says" that they are innocent! Haha, now that's a big joke.

I was adopted at birth in St Petersburg, FL and was raised in Largo, FL by some people who could not have their own children. The mother was a nurse at a big hospital and the father was creating a roofing company that fared rather well. When I was 8 or 9 he began touching me "scratching" my back late at night until at one point he actually penetrated me. At the time I never told, but I began to steal. I stole money from his wallet, I stole valuable coins from his collections. He never punished me for these actions. I never told... All the other mothers on our street shunned me and discouraged their kids from playing with me. They ALL knew that something was wrong, but no-one intervened. I took Tap & Jazz dancing lessons for several years and when I was awarded with trophies I was ashamed and felt undeserving... The parents didn't show up or encourage - it was something I got dropped off and picked up for. I didn't make friends and was a loner... I was still stealing from him.

Wow, I can't believe I'm just telling you all this so openly and freely, trust there are a lot of details, but I'm just trying to give you some background on myself. One thing Prison has done for me was to be a place all my anger and rage, a lifetime of hurts...

I'll be back next week and continue on with my history. Please tell me if I'm doing this right or ask anything you want. I am very much healed and okay with sharing.

If you like the Pen/Ink style of my art you can request something custom for yourself.

Have a great day!
Karyn.

I found your first blog to be very interesting! I, too, took ballet, tap, and jazz lessons growing up. I was wondering if you still try to stay active with anything?
Hello Karyn!
I loved reading your letter. Your honesty and openness is perfect. I can relate on may levels with you, and I too am very honest, and always appreciate it in others, so thank you. Let me introduce myself, My name is Jennifer, but I go by Jenni, I'm sure I have more names from other people, but I don't need to know them!...hahaha :) I have 5 children on earth and 1 in heaven; son 22,daughter 20,son 18, son 11,and a daughter 9 ,and My daughter that passed away. I am engaged to a much younger man, (I'm 40)he's my best friend. I am in college finishing up my degree in art. I paint, sketch, do tattoos, and make jewelry. I am starting to sew too, we'll see how that turns out....wish me luck..haha..I read that you played softball, I did too, I was the shortest on the team, and I'd hit that ball so hard and run as fast as I could, but I never got too far, but I sure thought I was! :)I can't tell what state you're in, I'm in California. I was very glad to read that you have healed. It takes a lot of courage and will to face our demons in life, and the strength you gain , and also give by going through the process is blessing in the chaos. I am constantly evolving still, and it's been quite a journey. I always say now "I'm bulletproof"...because as I'm sure you know, you get pretty darn tough after living in circumstances as you have, and are now, and as I have too. I did a short stay in our good ole' county club...haha...I'd love to hear more about you, and your artwork! I've blabbed enough about me, your probably asleep by now... haha:) Well, I hope all is well in your neck of the woods, and I look forward to hearing from you. Take care :)