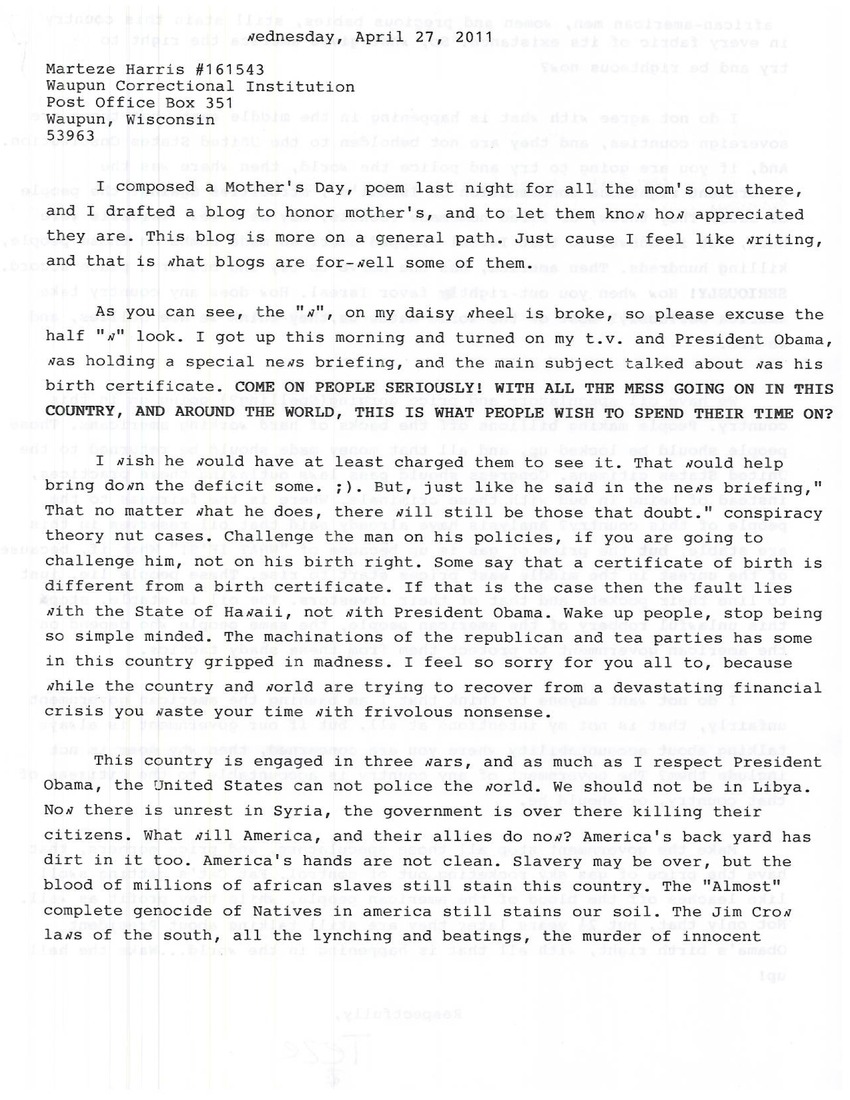 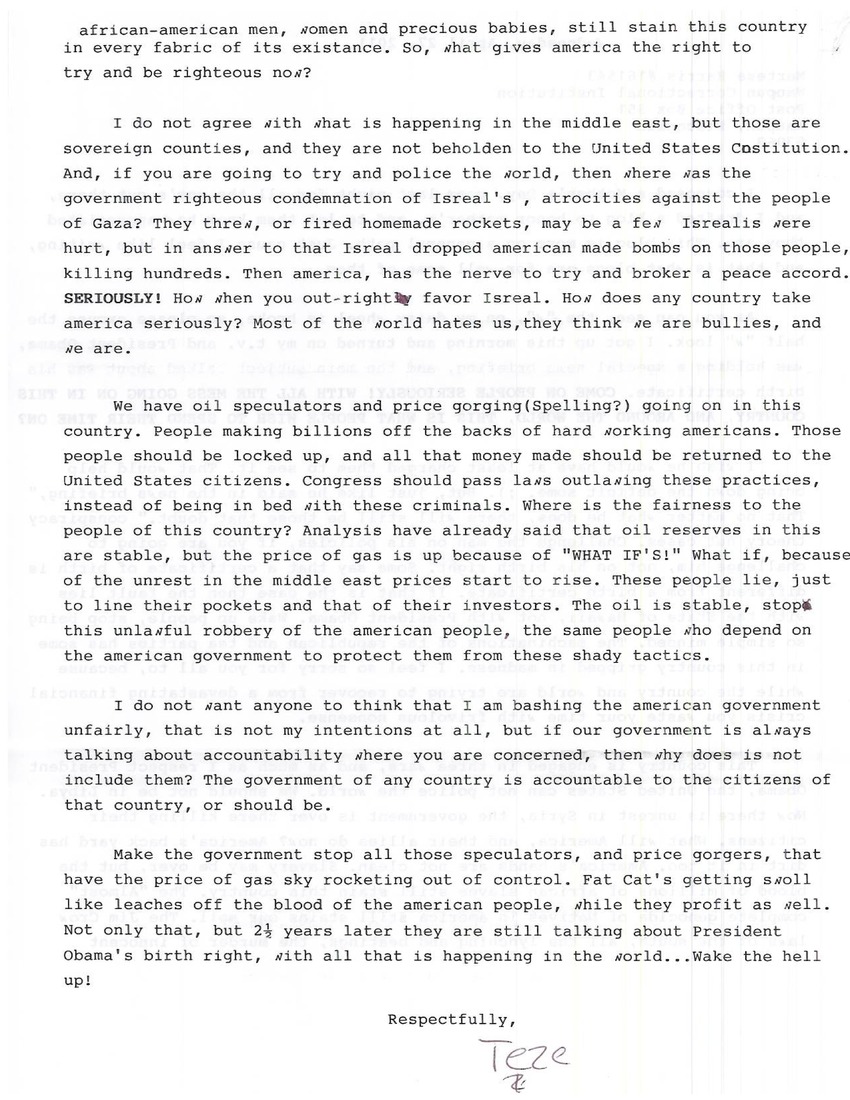 I composed a Mother's Day, poem last night for all the mom's out there, and I drafted a blog to honor mother's, and to let them know how appreciated they are. This blog is more on a general path. Just cause I feel like writing, and that is what blogs are for - well some of them.

As you can see, the "w", on my daisy wheel is broke, so please excuse the half "w" look. I got up this morning and turned on my t.v. and President Obama, was holding a special news briefing, and the main subject talked about was his birth certificate. COME ON PEOPLE SERIOUSLY! WITH ALL THE MESS GOING ON IN THIS COUNTRY, AND AROUND THE WORLD, THIS IS WHAT PEOPLE WISH TO SPEND THEIR TIME ON?

I wish he would have at least charged them to see it. That would help bring down the deficit some. ;). But, just like he said in the news briefing, "That no matter what he does, there will still be those that doubt." conspiracy theory nut cases. Challenge the man on his policies, if you are going to challenge him, not on his birth right. Some say that a certificate of birth is different from a birth certificate. If that is the case then the fault lies with the State of Hawaii, not with President Obama. Wake up people, stop being so simple minded. The machinations of the republican and tea parties has some in this country gripped in madness. I feel so sorry for you all to, because while the country and world are trying to recover from a devastating financial crisis you waste your time with frivolous nonsense.

This country is engaged in three wars, and as much as I respect President Obama, the United States can not police the world. We should not be in Libya. Now there is unrest in Syria, the government is over there killing their citizens. What will America, and their allies do now? America's back yard has dirt in it too. America's hands are not clean. Slavery may be over, but the blood of millions of African slaves still stain this country. The "Almost" complete genocide of Natives in America still stain our soil. The Jim Crow laws of the south, all the lynching and beatings, the murder of innocent African-American men, women and precious babies, still stain this country in every fabric of its existence. So, what gives America the right to try and be righteous now?

I do not agree with what is happening in the middle east, but those are sovereign counties, and they are not beholden to the United States Constitution. And, if you are going to try and police the world, then where was the government righteous condemnation of Israel's, atrocities against the people of Gaza? They threw, or fired homemade rockets, may be a few Israelis were hurt, but in answer to that Israel dropped American made bombs on those people, killing hundreds. Then America, has the nerve to try and broker a peace accord. SERIOUSLY! How when you out-right favour Israel. How does any country take America seriously? Most of the world hates us, they think we are bullies, and we are.

We have oil speculators and price gorging (Spelling?) going on in this country. People making billions off the backs of hard working Americans. Those people should be locked up, and all that money made should be returned to the United States citizens. Congress should pass laws outlawing these practices, instead of being in bed with these criminals. Where is the fairness to the people of this country? Analysis have already said that oil reserves in this are stable, but the price of gas is up because of "WHAT IF'S!" What if, because of the unrest in the middle east prices start to rise. These people lie, just to line their pockets and that of their investors. The oil is stable, stop this unlawful robbery of the American people, the same people who depend on the American government to protect them from these shady tactics.

I do not want anyone to think that I am bashing the American government unfairly, that is not my intentions at all, but if our government is always talking about accountability where you are concerned, then why does it not include them? The government of any country is accountable to the citizens of that country, or should be.

Make the government stop all those speculators, and price gorgers, that have the price of gas sky rocketing out of control. Fat Cat's getting swoll like leaches off the blood of the American people, while they profit as well. Not only that, but 2 1/2 years later they are still taking about President Obama's birth right, with all that is happening in the wold...Wake the hell up!