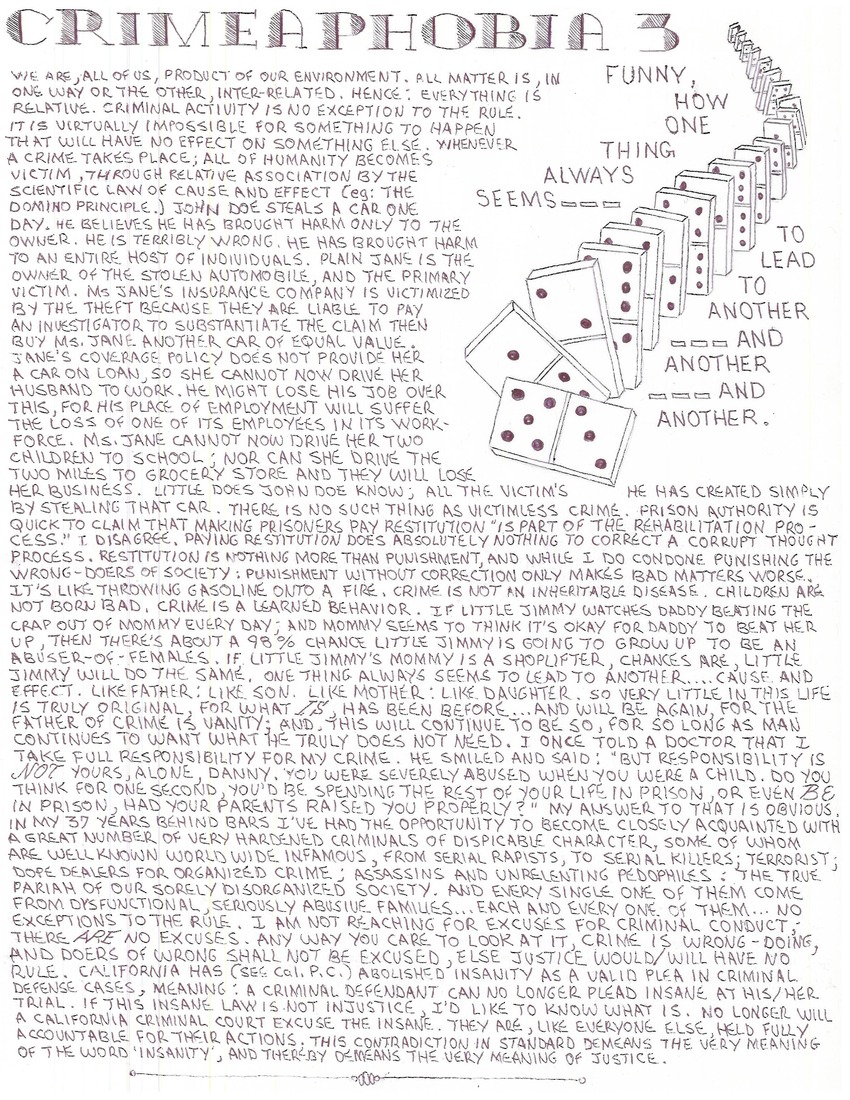 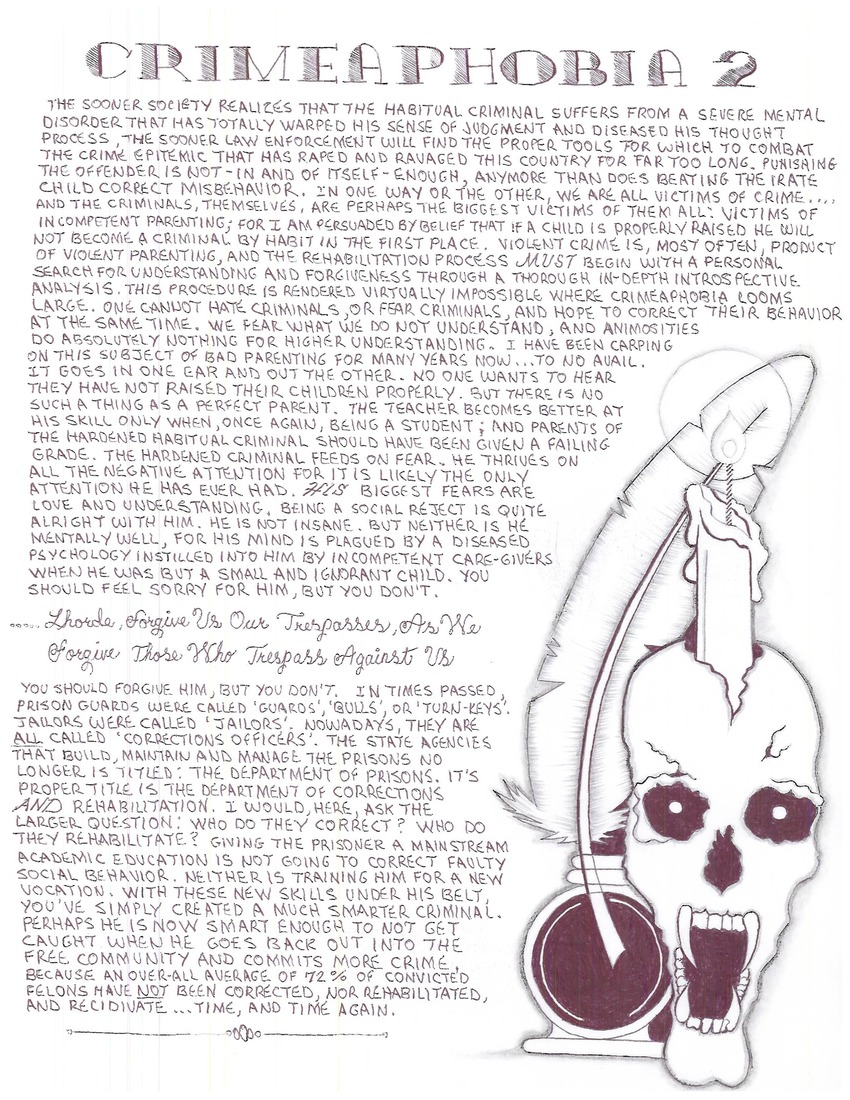 We are, all of us, product of our environment. All matter is, in one way or the other, inter-related. HEnce: everything is relative. Criminal activity is no exception to the rule. It is virtually impossible for something to happen that will have no effect on something else. Whenever a crime takes place; all of humanity becomes victim, through relative association by the scientific law of cause and effect (eg: The domino principle.) John Doe steals a car one day. He believes he has brought harm only to the owner. He is terribly wrong. He has brought harm to an entire host of individuals. Plain Jane is the owner of the stolen automobile, and the primary victim. Ms. Jae's insurance company is victimized by the theft because they are liable to pay an investigator to substantiate the claim then buy Ms. Jane another car of equal value. Janes coverage policy does not provide her a car on loan, so she cannot now drive her husband to work. He might lose his job over this, for his place of employment will suffer the loss of one of its employees in its workforce. Ms. Jane cannot now drive her two children to school; nor can she drive the two miles to the grocery store and they will lose her business. Little does John Doe know; all the victims he has created simply by stealing that car. There is no such thing as victimless crime. Prison authority is quick to claim that making prisoners pay restitution "is part of the rehabilitation process." I disagree. Paying restitution does absolutely nothing to correct a corrupt thought process. Restitution is nothing more than punishment, and while I do condone punishing the wrong-doers of society: punishment without correction only makes bad matters worse. It's like throwing gasoline onto a fire. Crime is not an inheritable disease. Children are not born bad. Crime is learned behavior. If little Jimmy watches daddy beating the crap out of mommy every day; and mommy seems to think it's okay for Daddy to beat her up, then there's about a 98% chance Little Jimmy is going to grow up to be an abuser-of-females. If Little Jimmy's mommy is a shoplifter, chances are, Little Jimmy will do the same. One thing always seems to lead to another... cause and effect. Like father: like son. Like Mother: like daughter. So very little in this life is truly original, for what IS, has been before... and will be again, for the father of crime is vanity; and this will continue to be so, for so long as man continues to want what he truly does not need. I once told a doctor that I take full responsibility for my crime. He smiled and said: "But responsibility is NOT yours, alone, Danny. You were severely abused when you were a child. Do you think for one second, you'd be spending the rest of your life in prison, or even BE in prison, had your parents raised you properly?" My answer to that is obvious. In my 37 years behind bars, I've had the opportunity to become closely acquainted with a great number of very hardened criminals of despicable character, some of whom are well known worldwide infamous, from serial rapists to serial killers; terrorist; dope dealers for organized crime; assassins and unrelenting pedophiles; the true pariah of our sorely disorganized society. And every single one of them come from dysfunctional, seriously abusive families... each and every one of them... no exceptions to the rule. I am not reaching for excuses for criminal conduct; there ARE no excuses. Any way you care to look at it, crime is wrong-doing, and doers of wrong shall not be excused, else justice would/will have no rule. California has (see Cal. P.C.) abolished insanity as a valid plea in criminal defense cases, meaning: a criminal defendant can no longer plead insane at his/her trial. If this insane law is not injustice, I'd like to know what is. No longer will a California criminal court excuse the insane. They are, like everyone else, held fully accountable for their actions. This contradiction in standard demeans the very meaning of the word 'insanity' and thereby demeans the very meaning of justice.

The sooner society realizes that the habitual criminal suffers from a severe mental disorder that has totally warped his sense of judgment and diseased his thought process, the sooner law enforcement will find the proper tools for which to combat the crime epidemic that thas raped and ravaged this country for far too long. Punishing the offender is not - in and of itself - enough, any more than does beating the irate child correct misbehavior. In one way or the other, we are all victims of crime... and the criminals, themselves, are perhaps the biggest victims of them all: victims of incompetent parenting; for I am persuaded by belief that if a child is properly raised he will not become a criminal by habit in the first place. Violent crime is, most often, product of violent parenting and the rehabilitation process MUST begin with a personal search for understanding and forgiveness through a thorough in-depth introspective analysis. This procedure is rendered virtually impossible where crimeaphobia looms large. One cannot hate criminals or fear criminals, and hope to correct their behavior at the same time. We fear what we do not understand, and animosities do absolutely nothing for higher understanding. I have been carping on this subject of bad parenting for many years now... to no avail. It goes in one car and out the other. No one wants to hear they have not raised their children properly but there is no such thing as a perfect parent. The teacher become better at his skill only when, once again, being a student; and parents of the hardened habitual criminal should have been given a failing grade. The hardened criminal feeds on fear. He thrives on all the negative attention for it is likely the only attention he has ever had. HIS biggest fears are love and understanding. Being a social reject is quite alright with him. He is not insane. But neither is he mentally well, for his mind is plagued by a diseased psychology instilled into him by incompetent caregivers when he was but small and ignorant child. You should feel sorry for him, but you don't.

Lhorde, forgive us our trespasses, as we forgive those who trespass against us

You should forgive him, but you don't. In times passed, prison guards were called 'guards', 'gulls', or 'turn-keys'. Jailors were called 'jailors'. Nowadays, they are all called 'corrections officers'. The state agencies that build, maintain and manage the prisons no longer is titled: The Department of Prisons. It's proper title is the Department of Corrections AND rehabilitation. I would, here, ask the larger question: who do they correct? Who do they rehabilitate? Giving the prisoner a mainstream academic education is not going to correct faulty social behavior. Neither is training him for a new vocation. With these new skills under this belt, you've simply created a much smarter criminal. Perhaps he is now smart enough to not get caught when he goes back out into the free community and commits more crime, because an overall average of 72% of convicted felons have NOT been corrected, nor rehabilitated, and reciduate... time, and time again.