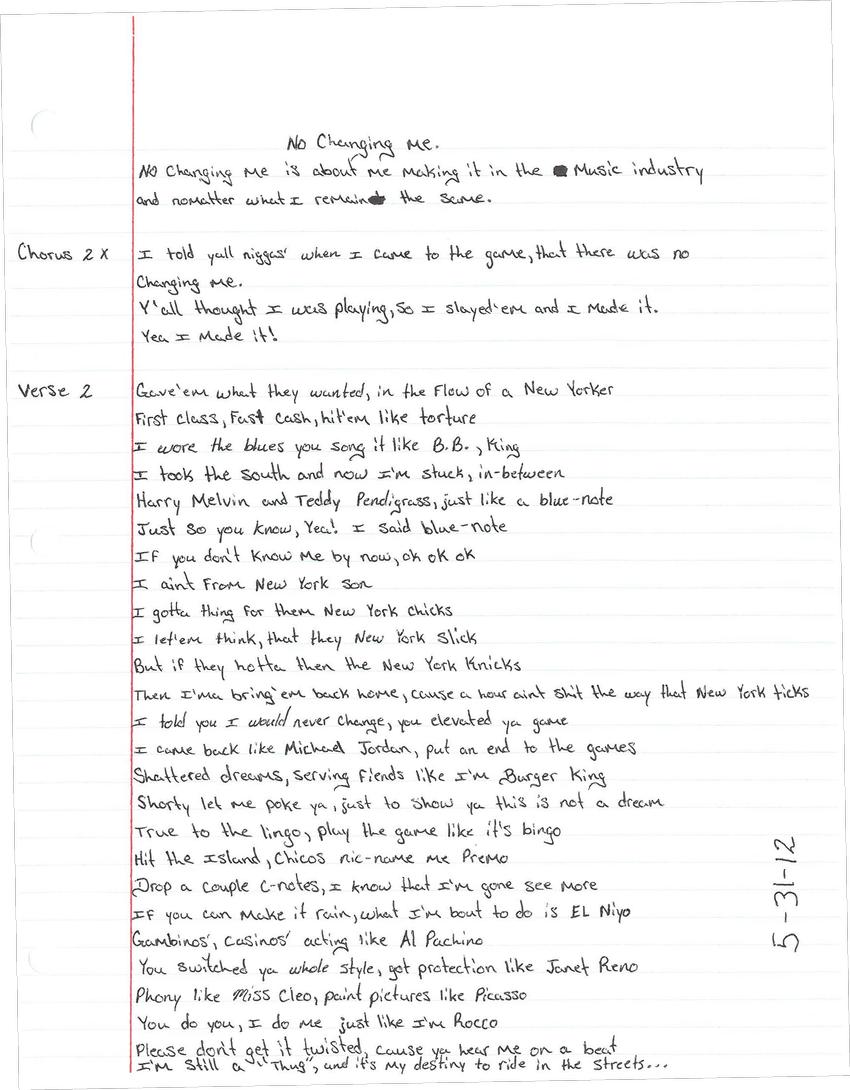 No Changing Me
No Changing Me is about me making it in the music industry and no matter what I remain the same.

Chorus 2x
I told y'all niggas when I cam to the game, that there was no
changing me.
Y'all thought I was playing, so I slayed 'em and made it.
Yeah, I made it!

Verse 2
Gave 'em what they wanted, in the flow of a New Yorker
First class, fast cash, hit 'em like torture
I wore the blues you sang it like B.B. King
I took the south and now I'm stuck in between
Harry Melvin and Teddy Pendigrass, just like a blue note
Just so you know, Yah! I said blue note
If you don't know me by now, ok ok ok
I ain't from New York, son
I gotta thing for them New York chicks
I let 'em think that they New York slick
But if they hotta then the New York Knicks
Then I'ma bring 'em back home 'cause a hour ain't shit the way that New York ticks
I told you I would never change, you elevated ya game
I came back like Michael Jordan, put an end to the games
Shattered dreams, serving fiends like I'm Burger King
Shortly let me poke ya just to show ya this is not a dream
True to the lingo, play the game like it's bingo
Hit the island, CHicos nickname me Premo
Drop a couple C-notes I know that I;mgone see more
If you can make it rain, what I'm 'bout to do is El Nino
Gambinos, casinos, acting like Al Pachino
You witched ya whole style got protection like Janet Reno
Phony like Miss Cleo, paint pictures like Picasso
You do you, I do me, just like I'm Rocco
Please don't get it twisted 'cause you hear me on a beat
I'm still a thug and it's my destiny to ride in the streets...