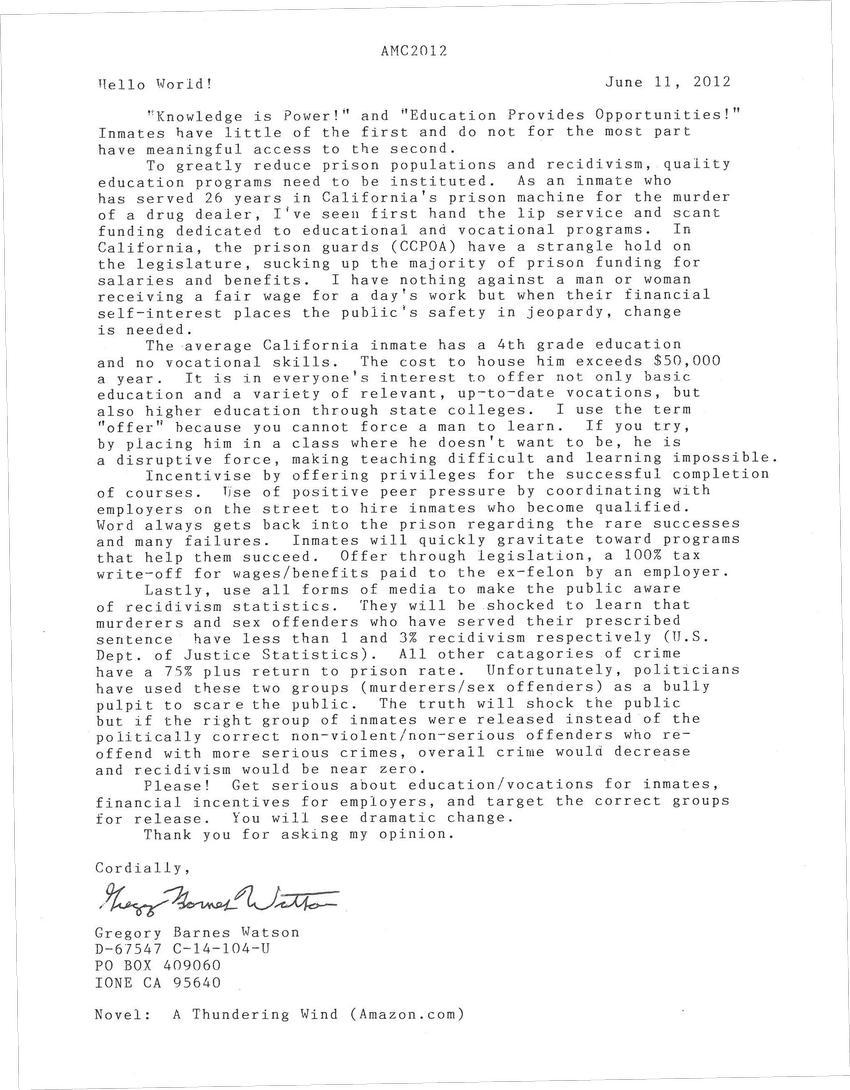 Inmates have little of the first and do not for the most part have meaningful access to the second.

To greatly reduce prison populations and recidivism, quality education programs need to be instituted. As an inmate who has served 26 years in California's prison machine for the murder of a drug dealer. I've seen first hand the lip service and scant funding dedicated to educational and vocational programs. In California, the prison guards (CCPOA) have a strangle hold on the legislature, sucking up the majority of prison funding for salaries and benefits. I have nothing against a man or woman receiving a fair wage for a day's work but when their financial self-interest places the public's safety in jeopardy, change is needed.

The average California inmate has a 4th grade education and no vocational skills. The cost to house his exceeds $50,000 a year. It is in everyone's interest to offer not only basic education and a variety of relevant, up-to-date vocations, but also higher education through state colleges. I use the term "offer" because you cannot force a man to learn. If you try, by placing him in a class where he doesn't want to be, he is a disruptive force, making teaching difficult and learning impossible.

Incentivise by offering privileges for the successful completion of courses. Use of positive peer pressure by coordinating with employers on the street to hire inmates who become qualified. Word always gets back into the prison regarding the rare successes and many failures. Inmates will quickly gravitate toward programs that help them succeed. Offer through legislation, a 100% tax write-off for wages/benefits paid to the ex-felon by an employer.

Lastly, use all forms of media to make the public aware of recidivism statistics. They will be shocked to learn that murderers and sex offenders who have served their prescribed sentence have less than 1 and 3% recidivism respectively (U.S. Dept. of Justice Statistics). All other categories of crime have a 75% plus return to prison rate. Unfortunately, politicians have used these two groups (murderers/sex offenders) as a bully pulpit to scare the public. The truth will shock the public but if the right group of inmates were released instead of the politically correct non-violent/non-serious offenders who re-offend with more serious crimes, overall crime would decrease and recidivism would be near zero.

Please! Get serious about education/vocations for inmates, financial incentives for employers, and target the correct groups for release. You will see dramatic change.

Thank you for asking my opinion.