My Disquietude of Death 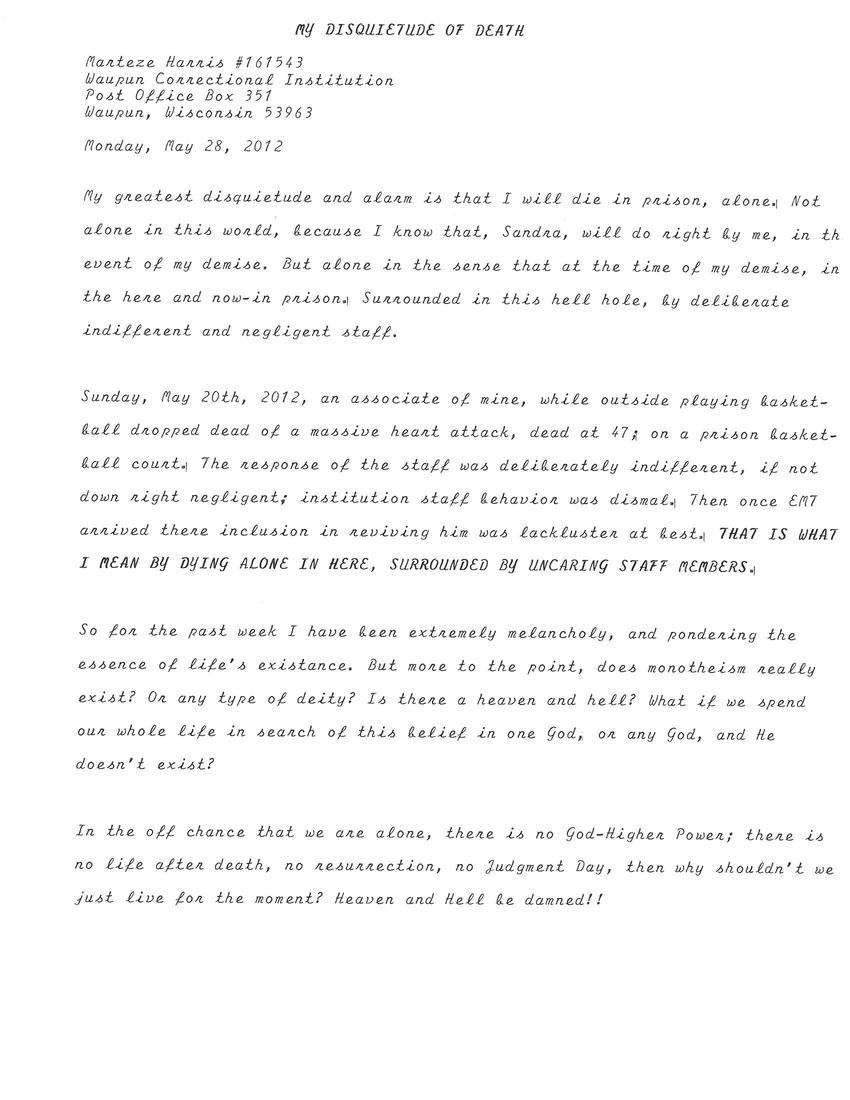 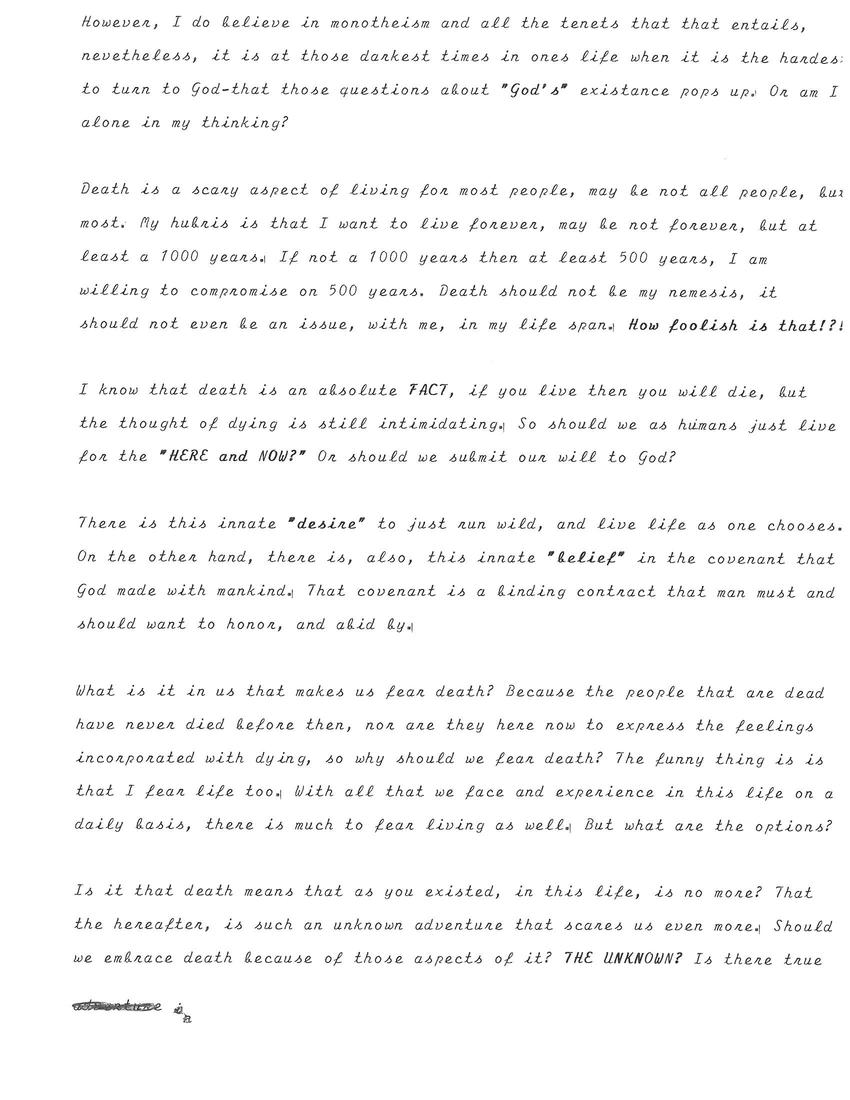 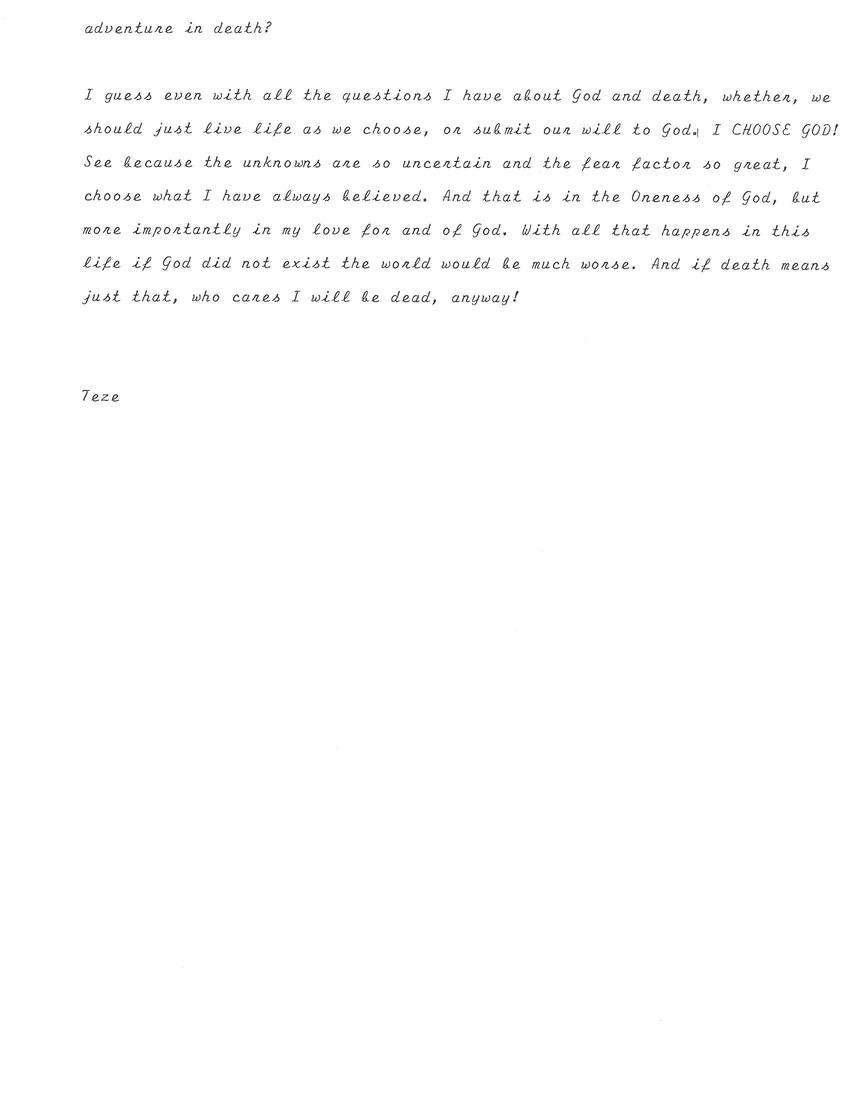 MY DISQUIETUDE OF DEATH

My greatest disquietude and alarm is that I will die in prison, alone. Not alone in this world, because I know that, Sandra, will do right by me, in the event of my demise. But alone in the sense that at the time of my demise, in the here and now - in prison. Surrounded in this hell hole, by deliberate indifferent and negligent staff.

Sunday May 2012 an associate of mine, while outside playing basket-ball dropped dead of a massive heart attack, dead at 47, on a prison basket-ball curt. The response of the staff was deliberately indifferent, if not down right negligent, institution staff behavior was dismal. Then once EM7 arrived there inclusion in reviving him was lackluster at best. THAT IS WHAT I MEAN BY DYING ALONE IN HERE, SURROUNDED BY UNCARING STAFF MEMBERS.

So far the past week I have been extremely melancholy, and pondering the essence of life's existence. But more to the point, does monotheism really exist? Or any type of deity? Is there a heaven and hell? What if we spend pour whole life in search of this belief in one God, or any God, and he doesn't exist?

In the off chance that we are alone, there is no God-Higher Power; there is no life after death, no resurrection, no judgement Day, then why shouldn't we just live for the moment? Heaven and Hell be damned!!

However, I do believe in monotheism and all the tenets that that entails, nevertheless, it is at those darkest times in one's life when it is the hardest to turn to God - that those questions about "God's" existence pops up. Or am I alone in my thinking?

Death is a scary aspect of living for most people, may be not all people, but most. My hubris is that I want to live forever, maybe not forever, but at least a 1000 years. If not a 1000 years then at least 500 years, I am willing to compromise on 500 years. Death should not be my nemesis, it should not even be an issue, with me, in my life span. How foolish is that!?!

I know that death is an absolute FACT, if you live then you will die, but the thought of dying is still intimidating. So should we as humans just live for the "HERE and NOW" Or should we submit our will to God?

There is this innate "desire" to just run wild, and live life as one chooses. On the other hand, there is, also, this innate "belief" in the covenant that God made with mankind. That covenant is a binding contract that man must and should want to honor, and abide by.

What is it in us that makes us fear death? because the people that are dead have never died before then, nor are they here now to express the feelings incorporated with dying, so why should we fear death? The funny thing is is that I fear life too. With all that we face and experience in this life on a daily basis, there is much to fear living as well. But what are the options?

Is it tha death means that as you existed, in this life, is no more? That the hereafter, is such an unknown adventure that scares us even more. Should we embrace death because of those aspects of it? THE UNKNOWN? Is there true adventure in death?

I guess even with all the questions I have about God and death, whether, we should just live life as we choose, or submit our will to God. I CHOOSE GOD! See, because the unknowns are so uncertain and the fear factor so great, I choose what I have always believed. And that is in the oneness of God, but more importantly in my love for and of God. With all that happens in this life if God did not exist the world would be much worse. And if death means just that, who cares, I will be dead, anyway!