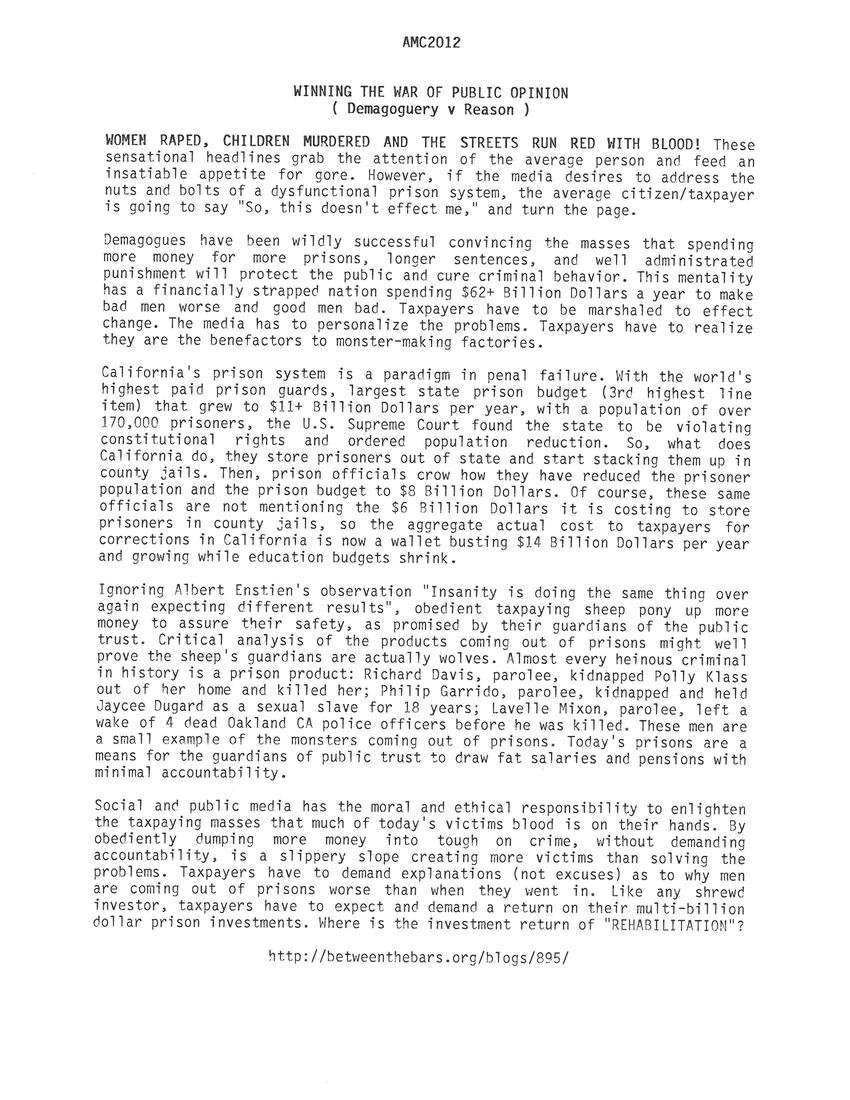 WOMEN RAPED, CHILDREN MURDERED AND THE STREETS RUN RED WITH BLOOD! These sensational headlines grab the attention of the average person and fed an insatiable appetite for gore. However, if the media desires to address the nuts and bolts of a dysfunctional prison system, the average citizen/taxpayer is going to say "So, this doesn't affect me," and turn the page.

Demagogues have been wildly successful convincing the masses that spending more money for more prisons, longer sentences, and well administrated punishment will protect the public and cure criminal behavior. This mentality has a financially strapped nation spending $63+ Billion Dollars a year to make bad men words and good men bad. Taxpayers have to be marshaled to effect change. The media has to personalize the problems. Taxpayers have to realize they are the benefactors to monster-making factories.

California's prison system is a paradigm in penal failure. With the world's highest paid prison guards, largest state prison budget (3rd highest line item) that grew to $11+ Billion Dollars per year, with a population of over 170,000 prisoners, the U.S. Supreme Court found the state to be violating constitutional rights and ordered population reduction. So, what does California do, they store prisoners out of state and start stacking them up in county jails. Then, prison officials crow how they have reduced the prisoner population and the prison budget to $8 Billion Dollars. Of course, these same officials are not mentioning the $6 Billion Dollars it is costing to store prisoners in county jails, so the aggregate actual cost to taxpayers for corrections in California is now a wallet busting $14 Billion Dollars per year and growing while education budgets shrink.

Ignoring Albert Einstein's observation "Insanity is doing the same thing over again expecting different results", obedient taxpaying sheep pony up more money to assure their safety, as promised by their guardians of the public trust. Critical analysis of the products coming out of prisons might well prove the sheep's guardians are actually wolves. Almost every heinous criminal in history is a prison product: Richard Davis, parolee, kidnapped Polly Klass out of her home and killed her; Philip Garrido, parolee, kidnapped and held Jaycee Dugard as a sexual slave for 18 years; Lavelle Mixon, parolee, left a wake of 4 dead Oakland CA police officers before he was killed. These men are a small example of the monsters coming out of prisons. Today's prisons are a means for the guardians of public trust to draw fat salaries and pensions with minimal accountability.

Social and public media has the moral and ethical responsibility to enlighten the taxpaying masses that much of today's victims blood is on their hands. By obediently dumping more money into tough on crime, without demanding accountability, is a slippery slope creating more victims than solving the problems. Taxpayers have to demand explanations (not excuses) as to why men are coming out of prisons worse than when they went in. Like any shrewd investor, taxpayers have to expect and demand a return on their multi-billion dollar prison investments. Where is the investment return of "REHABILITATION"?