From Elementary To The Penitentiary 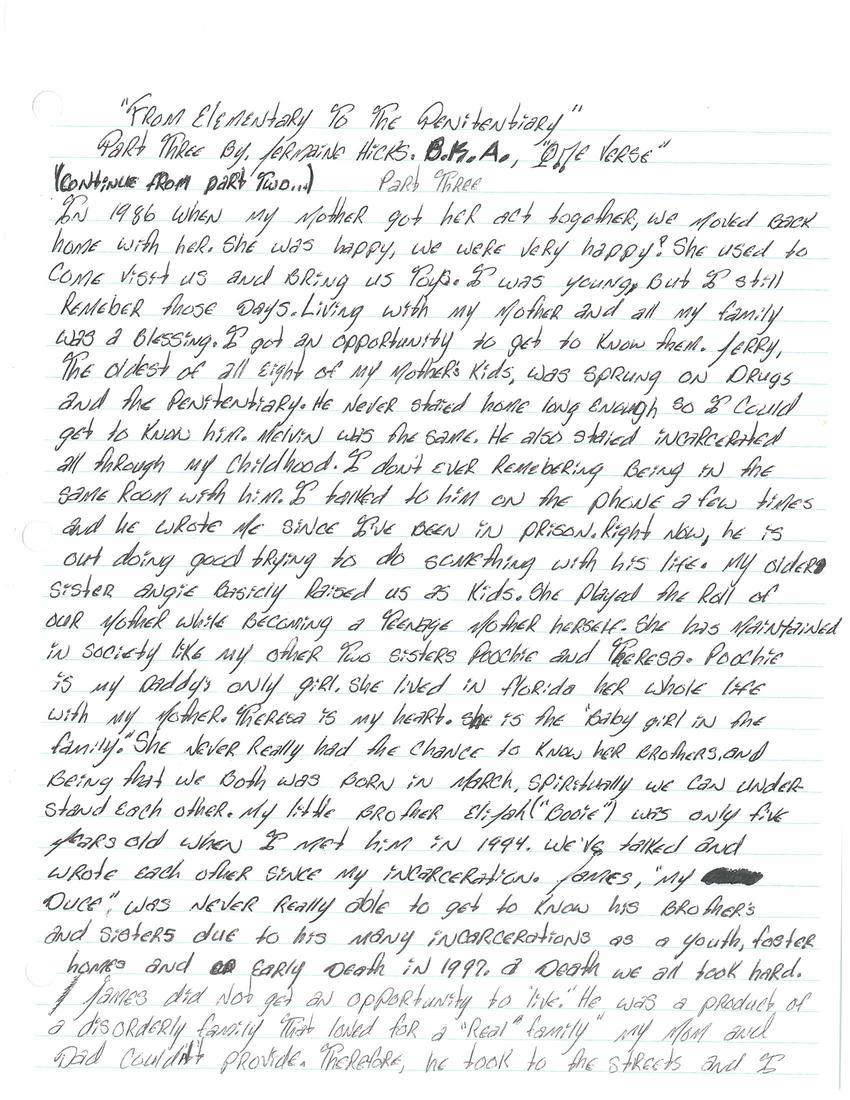 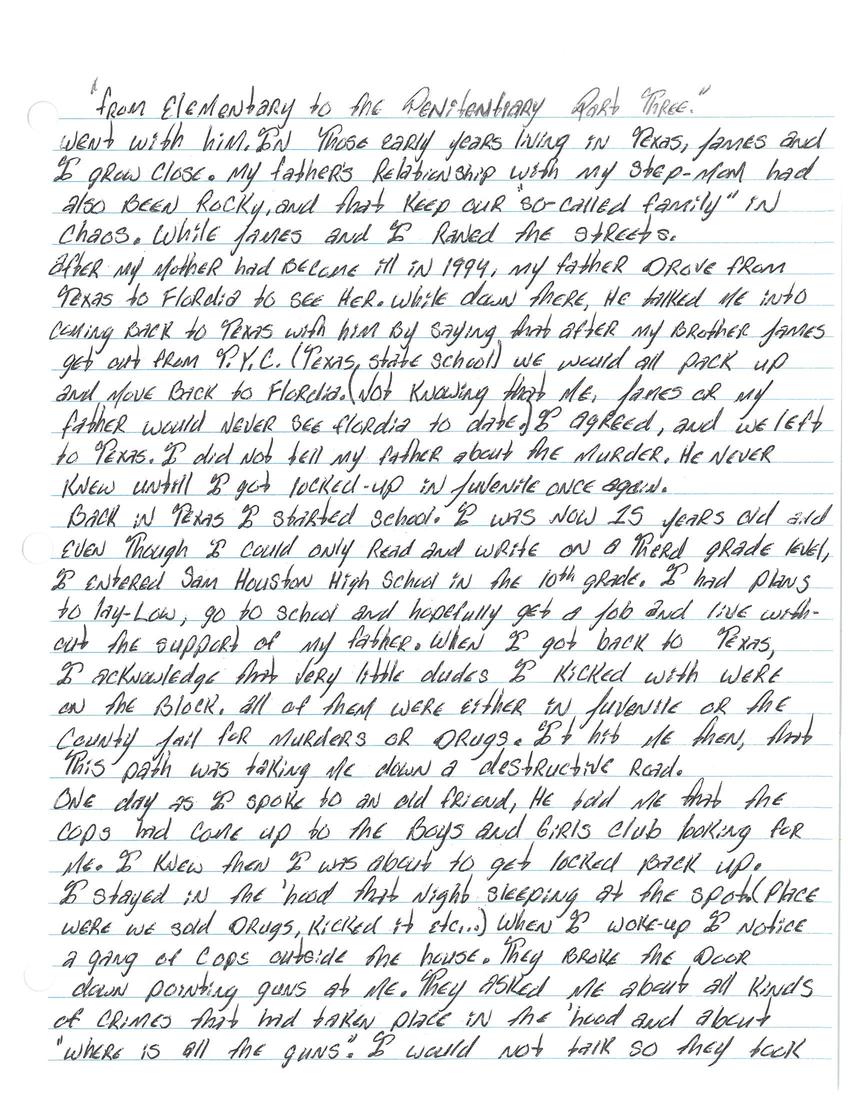 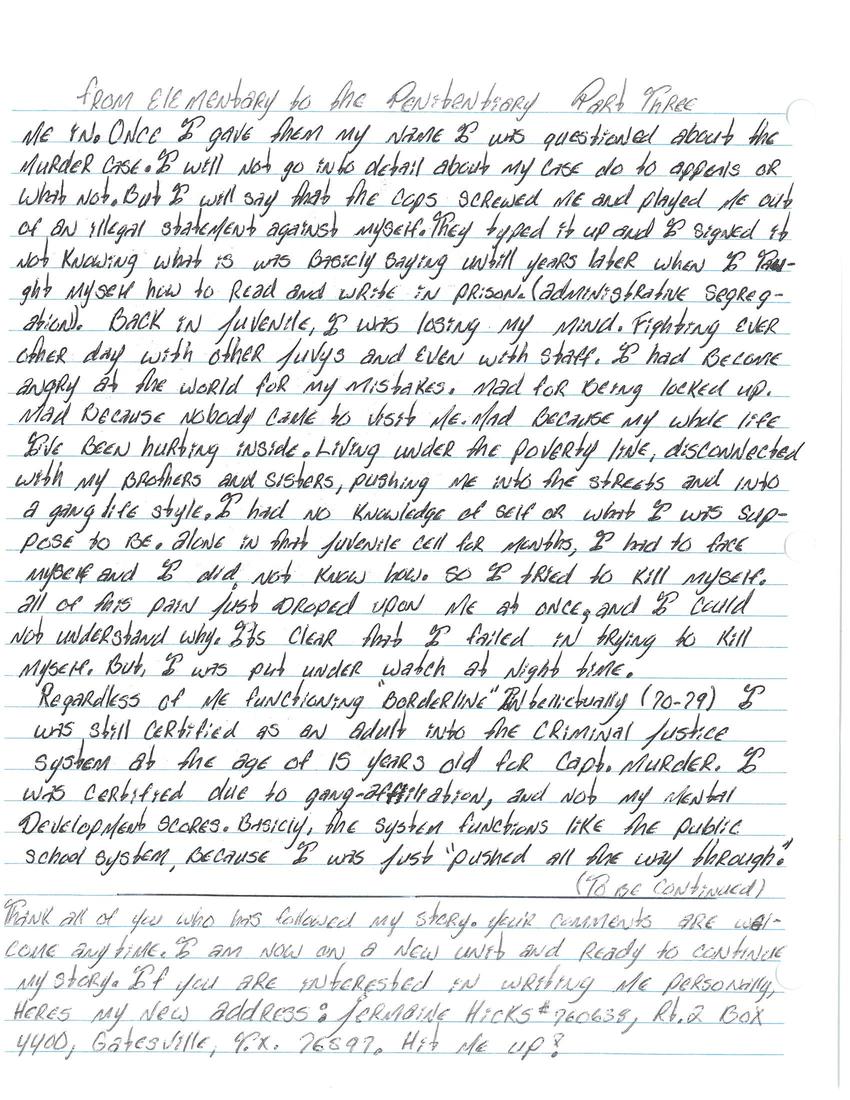 "From Elementary to The Penitentiary"

In 1986 when my mother got her act together, we moved back home with her. She was happy, we were very happy! She used to come visit us and bring us toys. I was young, but I still remember those days. Living with my mother and all my family was a blessing. I got an opportunity to get to know them. Jerry, the oldest of all eight of my mother's kids, was sprung on drugs and the penitentiary. He never stayed home long enough so I could get to know her. Melvin was the same. He also stayed incarcerated all through my childhood. I don't ever remember being in the same room with him? I talked to him on the phone a few times and he wrote me sine I've been in prison. Right now, he is out doing good trying to do something with his life. My older sister Angie basicly raised us as kids. She played the role of our mother while becoming a teenage mother herself. She has maintained in society like my other two sisters Poochie and Theresa. Poochie is my Daddy's only girl. She lived in Florida her whole life with my mother. Theresa is my heart. She is the "baby girl in the family". She never really had the chance to know her brothers and being that we both was born in March, spiritually we can understand each other. My little brother Elijah ("Booie") was only five years old when I met him in 1994. We've talked and wrote each other since my incarceration. James, "my duce", was never really able to get to know his brothers and sisters due to his many incarcerations as a youth, foster homes and early death in 1997, a death we all took hard.

James did not get an opportunity to "live". He was a product of a disorderly family that longed for a "real family" my Mom and Dad couldn't prove. Therefore, he took to the streets and I went with him. In those early years living in Texas, James and I grew close. My father's relationship with my step-mom had also been rocky, and that keep our "so-called family" in chaos. While James and I raned the streets.

After my mother had become ill in 1994, my father drove from Texas to Florida to see her. While down there, we talked me into coming back to Texas with him by saying, that after my brother James get out for T.Y.C (Texas State School) we would all pack up and move back to Florida. (Not knowing that me, James or my father would never see Florida to date) I agreed, and we left to Texas. I did not tell my father about the murder. He never knew until I got locked-up in juvenile once again.

Back in Texas I started school. I was now 15 years old and even though I could only read and write on a third grade level, I entered Sam Houston High School in the 10th grade. I had plans to lay low, go to school and hopefully get a job and live without the support of my father. When I got back to Texas, I acknowledge that very little dudes I kicked with were on the block. All of them were either in juvenile or the county jail for murders or drugs. It hit me then, that this path was taking me down a destructive road.

One day as I spoke to an old friend, he told me that the cops had come up to the Boys and Girls Club looking for me. I knew then I was about to get locked back up. I stayed in the 'hood that night sleeping at the spot (place where we said drugs, kicked it etc...) When I woke up I notice a gang of cops outside the house. They broke the door down pointing guns at me. They asked me about all kinds of crimes that had taken place in the 'hood and about "where is all the guns?" I would not talk so they took me in. Once I gave them my name I was questioned about the murder case. I will not go into detail about my case due to appeals or whatnot. But I will say that the cops screwed me and played me out of an illegal statement against myself. They typed it up and I signed it not knowing what it was saying until years later when I taught myself how to read in write in prison (administrative segregation). Back in juvenile, I was losing my mind. Fighting every other day with other juvys and even with staff. I had become angry at the world for my mistakes. Mad for being locked up. Mad because nobody came to visit me. Mad because my whole life I've been hurting inside. Living under the poverty line, disconnected with my brothers and sisters, pushing me into the streets and into a gang lifestyle. I had no knowledge of self or what I was supposed to be. Alone in that juvenile cell for months, I had to face myself and I did not know how. So I tried to kill myself. All of this pain just dropped upon me at once, and I could not understand why. It's clear that I failed in trying to kill myself, but I was put under watch at night time.

Regardless of me functioning "borderline" intellectually (70-79) I was still certified as an adult into the criminal justice system at the age of 15 years old for capt. murder. I was certified due to gang-affiliation, and not my mental development scores. Basically, the system functions like the public school system, because I was just "pushed all the way through".

Thank all of you who has followed my story. Your comments are welcome any time. I am now on a new unit and ready to continue my story. If you are interested in writing me personally, here's my new address: Jermaine Hicks #760638, Rt. 2 Box 4400, Gatesville, TX 76597. Hit me up!