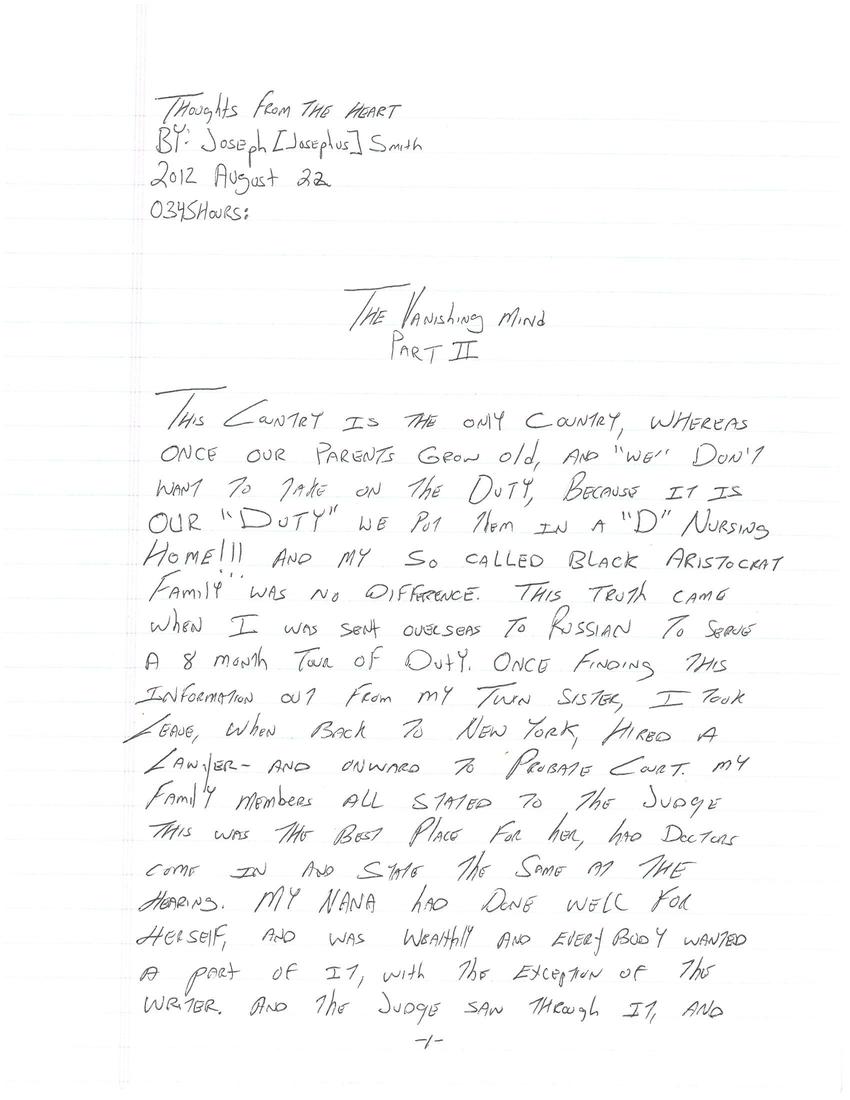 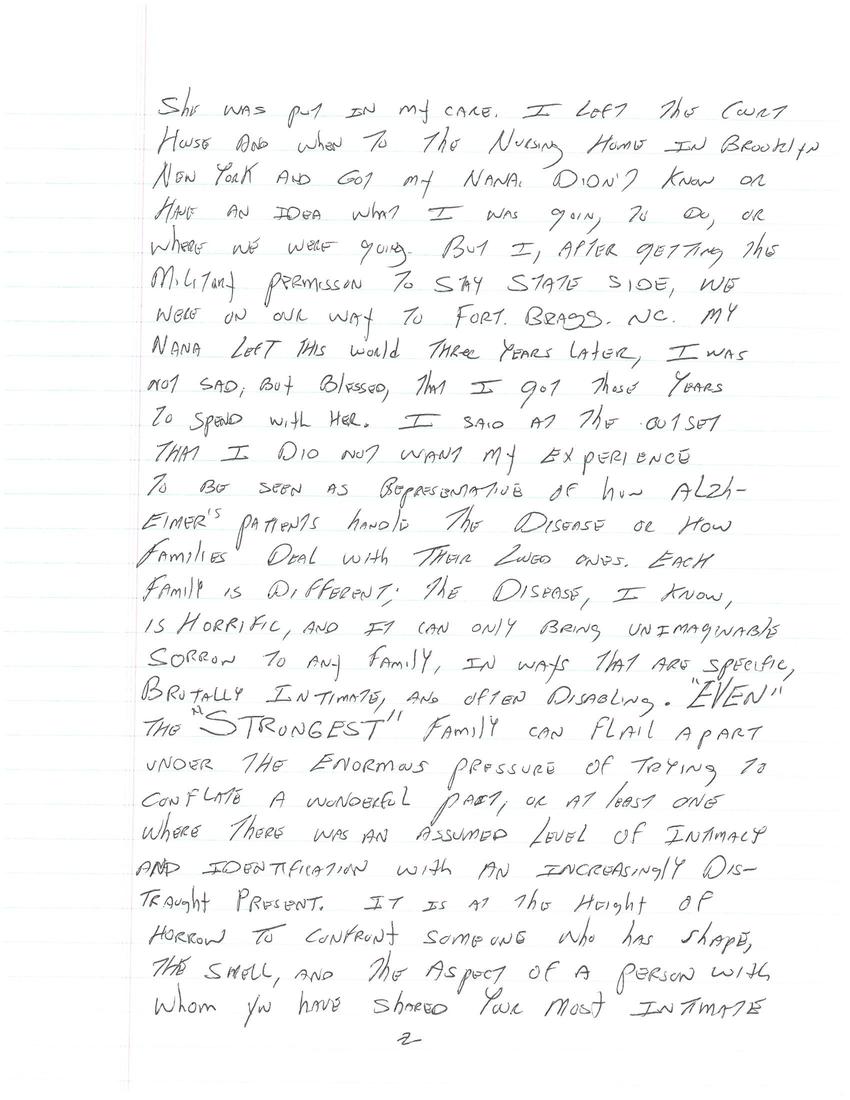 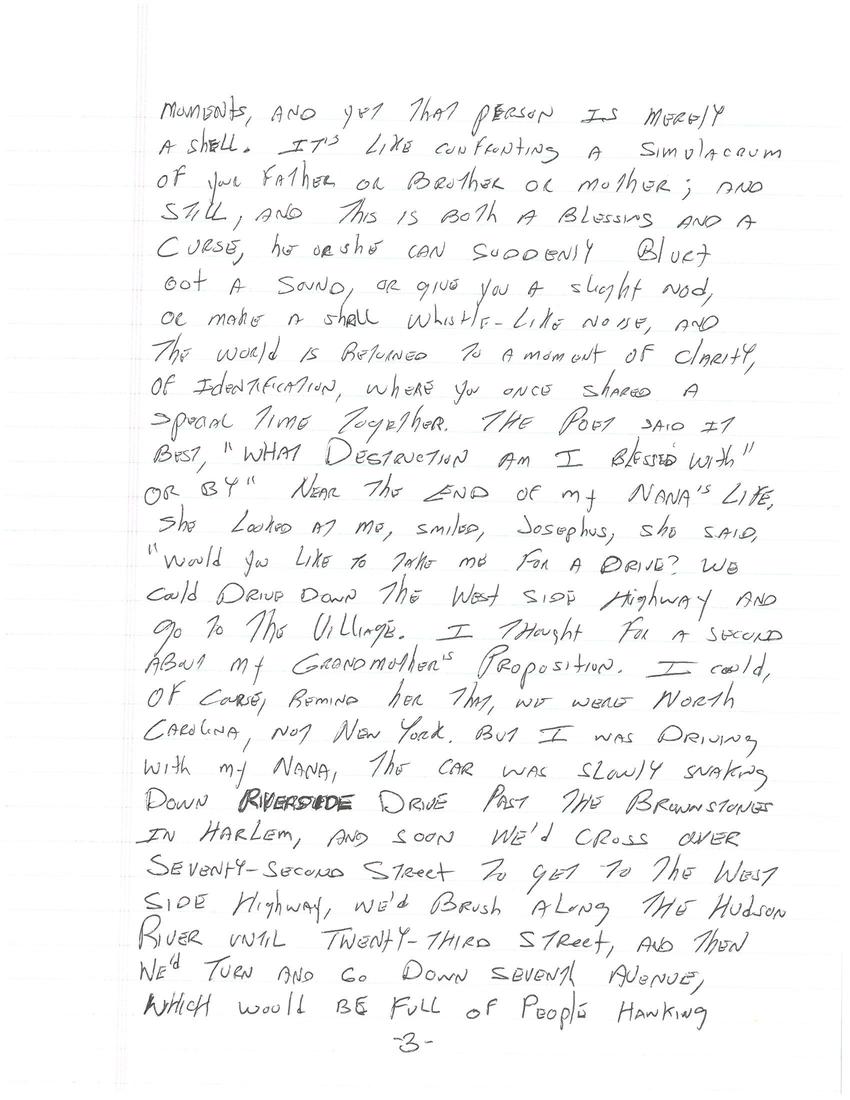 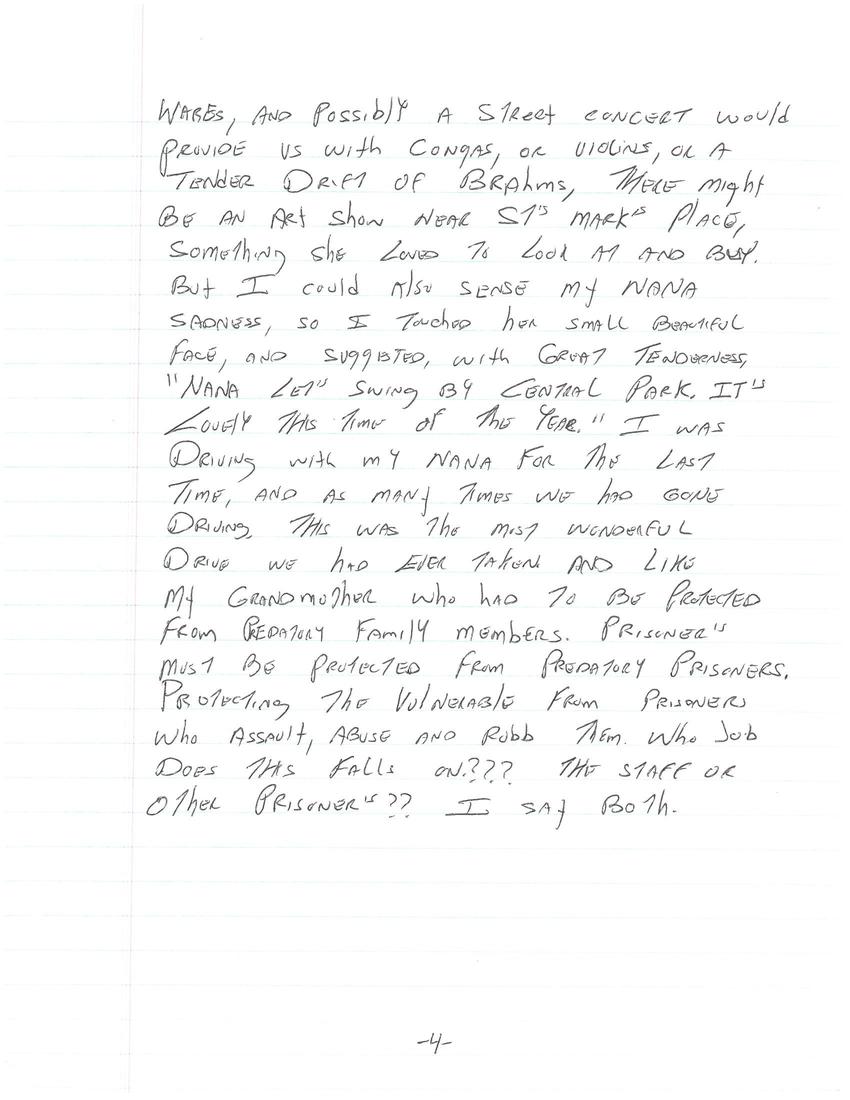 THOUGHTS FROM THE HEART

This country is the only country, whereas once our parents grow old, and "we" don't want to take on the duty, because it is our "DUTY" we put them in a "D" Nursing Home!!! And my so called black aristocrat family was no difference. This truth came when I was sent overseas to Russia to serve an 8 month tour of duty. Once finding this information out from my twin sister, I took leave, went back to New York, hired a lawyer - and onward to probate court. My family members all stated to the judge this was the best place for her, had doctors come in and state the same at the hearing. My Nana had done well for herself, and was wealthy and everybody wanted a part of it, with the exception of the writer. And the judge saw through it, and she was put in my care. I left the court house and went to the Nursing Home in Brooklyn, New York and got my Nana. Didn't know or have an idea what I was going to do, or where we were going. But I, after getting the military permission to say state side, we were on our way to Fort Bragg, NC. My Nana left this world three years later, I was not sad, but blessed, that I got those years to spend with her. I said at the outset that I did not want my experience to be seen as representative of how Alzheimer's patients handle the disease or how families deal with loved ones. Each family is different; the disease, I know, is horrific, and it can only bring unimaginable sorrow to any family, in ways that are specific, brutally intimate and often disabling. "EVEN" the "STRONGEST" family can flail apart under the enormous pressure of trying to conflate a wonderful past, or at least one where there was an assumed level of intimacy and identification with an increasingly distraught present. It is at the height of horror to confront someone who has shape, the shell and the aspect of a person with whom you have shared your most intimate moments, and yet that person is merely a shell. It's like confronting a simulacrum of your father or brother or mother; and still, and this is both a blessing and a curse, he or she can suddenly blurt out a sound, or give you a slight nod, or make a shrill whistle-like noise, and the world is returned to a moment of clarity, of identification, where you once shared a special time together. The poet said it best, "What destruction am I blessed with or by?" Near the end of my Nana's life, she looked at me, smiled, Josephus, she said, "Would you like to take me for a drive? We could drive down the West Side Highway and go to the Village." I thought for a second about my grandmother's proposition. I could, of course, remind her that, we were North Carolina, not New York. But I was driving with my Nana, the car was slowly snaking down Riverside Drive past the brownstone in Harlem, and soon we'd cross over Seventy-Second Street to get to the West Side Highway. We'd brush along the Hudson River until Twenty-Third Street, and then we'd turn and go down Seventh Avenue, which would be full of people hawking wares, and possibly a street concert would provide us with congas, or violins, or a tender drift of Brahms. There might be an art show near St Mark's Place, something she loved to look at and buy. But I could also sense my Nana sadness, so I touched her small beautiful face, and suggested, with great tenderness, "Nana, let's swing by Central Park, it's lovely this time of the year." I was driving with my Nana for the last time, and as many times we had gone driving, this was the most wonderful drive we had ever taken and like my grandmother who had to be protected from predatory family members, prisoners must be protected from predatory prisoners. Protecting the vulnerable from prisoner who assault, abuse and rob them. Who job does this falls on??? The staff or other prisoners?? I say both.