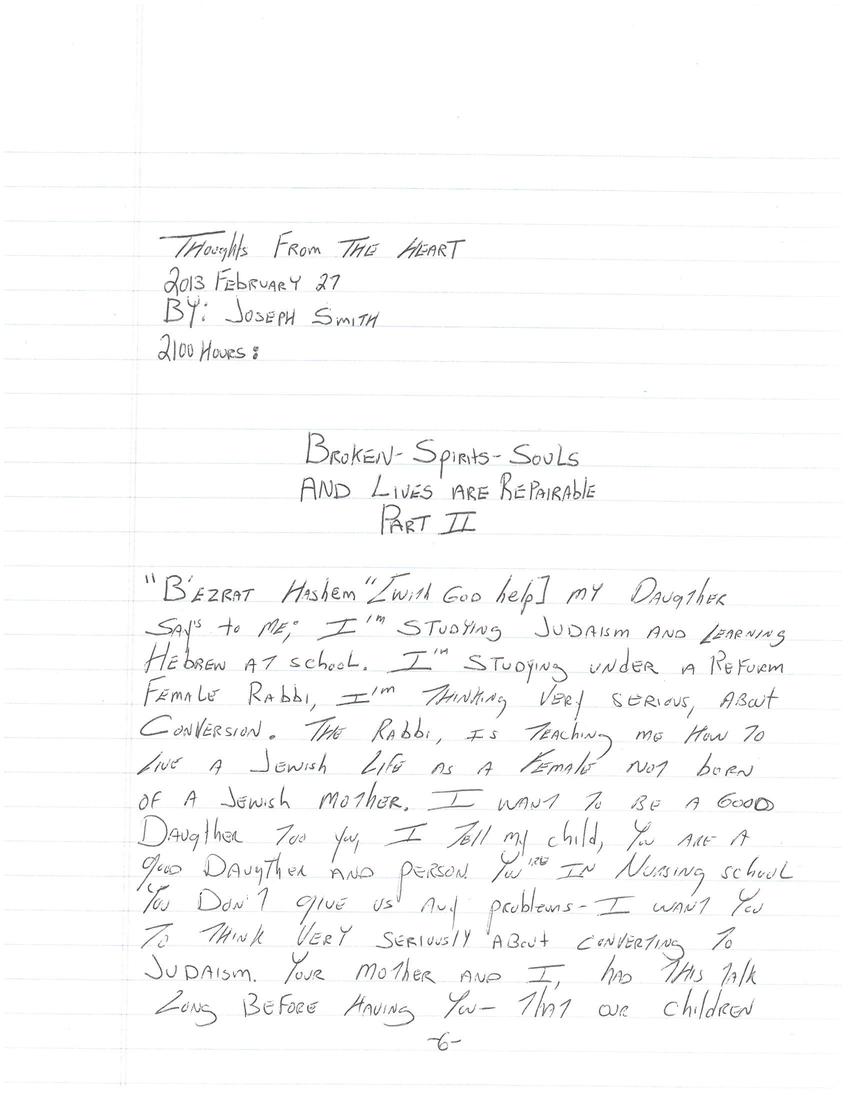 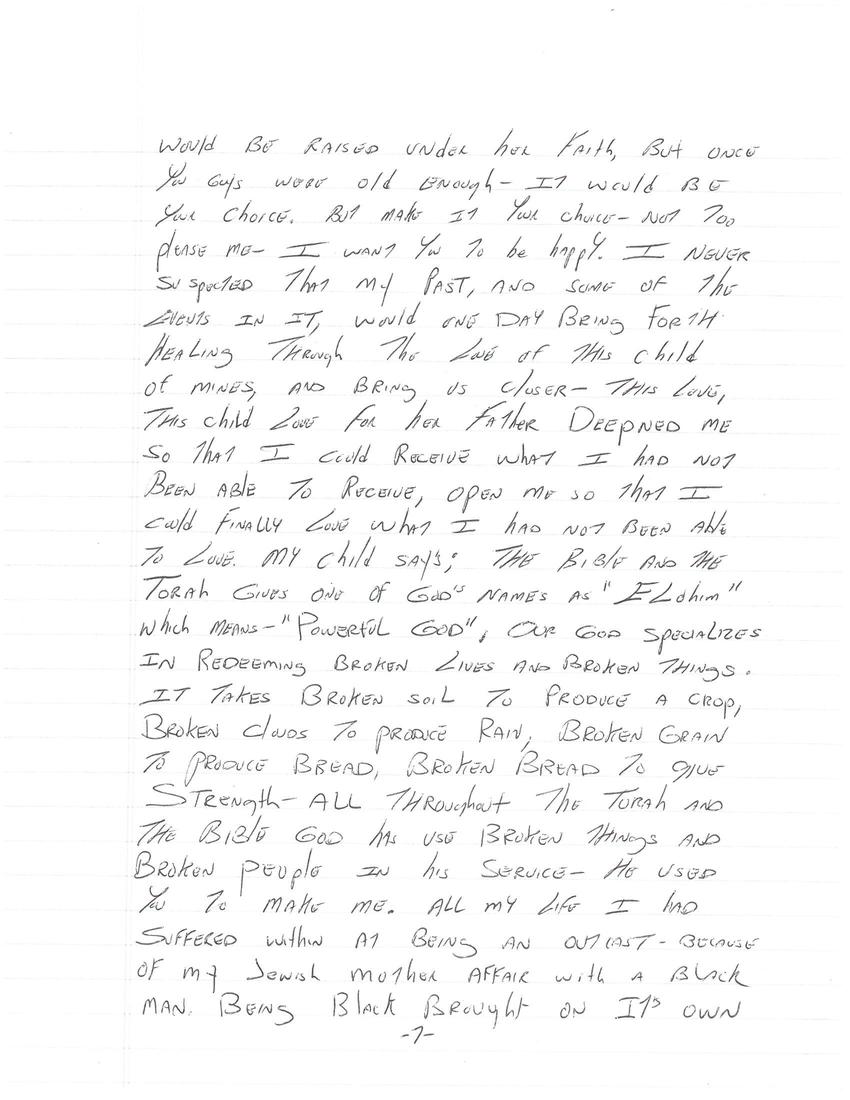 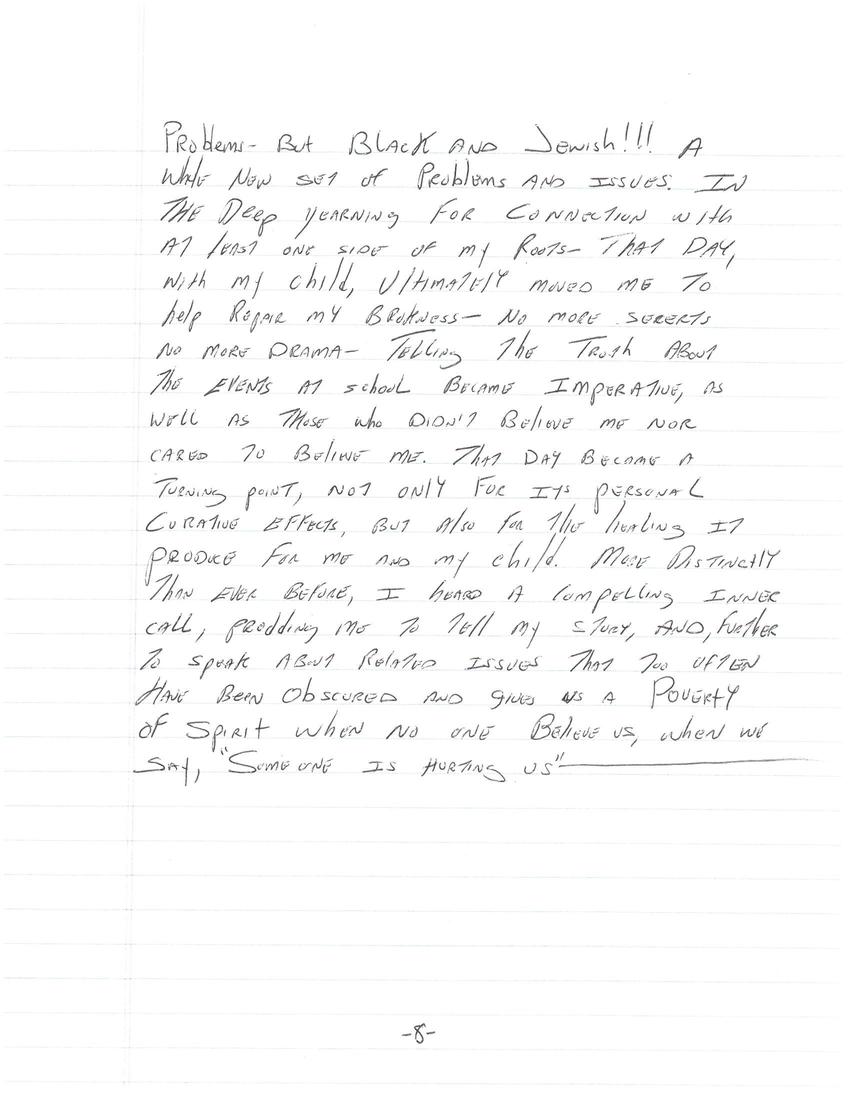 "B'Ezrat Hashem" [with God's help] my daughter says to me, "I'm studying Judaism and learning Hebrew at school. I'm studying under a Reform female rabbi, I'm thinking, very serious, about conversion. The rabbi is teaching me how to live a Jewish life as a female not born of a Jewish mother. I want to be a good daughter to you." I tell my child, You are a good daughter and person. You're in nursing school, you don't give me any problems - I want you to think very seriously about converting to Judaism. Your mother and I had this talk long before having you - that our children would be raised under her faith, but once you guys were old enough - it would be your choice. But make it your choice - not to please me - I want you to be happy. I never suspected that my past, and some of the events in it, would one day bring forth healing through the love of this child of mine, and bring us closer - this love, this child love for her father deepened me so that I could receive what I had not been able to receive, open me so that I could finally love what I had not been able to love. My child says; The Bible and the Torah gives one of God's names as "Elohim" which means - "Powerful God". Our God specializes in redeeming broken lives and broken things. It takes broken soil to produce a crop, broken clouds to produce rain, broken grain to produce bread, broken bread to give strength - all throughout the Torah and the Bible God has used broken things and broken people in his service - He used you to make me. All my life I had suffered within at being an outcast - because of my Jewish mother affair with a black man. Being black brought on its own problems - but black and Jewish!!! A whole new set of problems and issues. In the deep yearning for connection with at least one side of my roots - that day, with my child, ultimately moved me to help repair my brokenness - no more secrets, no more drama - telling the truth about the events at school became imperative, as well as those who didn't believe me nor cared to believe me. That day became a turning point, not only for its personal curative effects, but also for the healing it produced for me and my child. More distinctly than ever before, I heard a compelling inner call, prodding me to tell my story, and, further to speak about related issues that too often have been obscured and gives us a poverty of spirit when no one believe us, when we say, "Someone is hurting us."