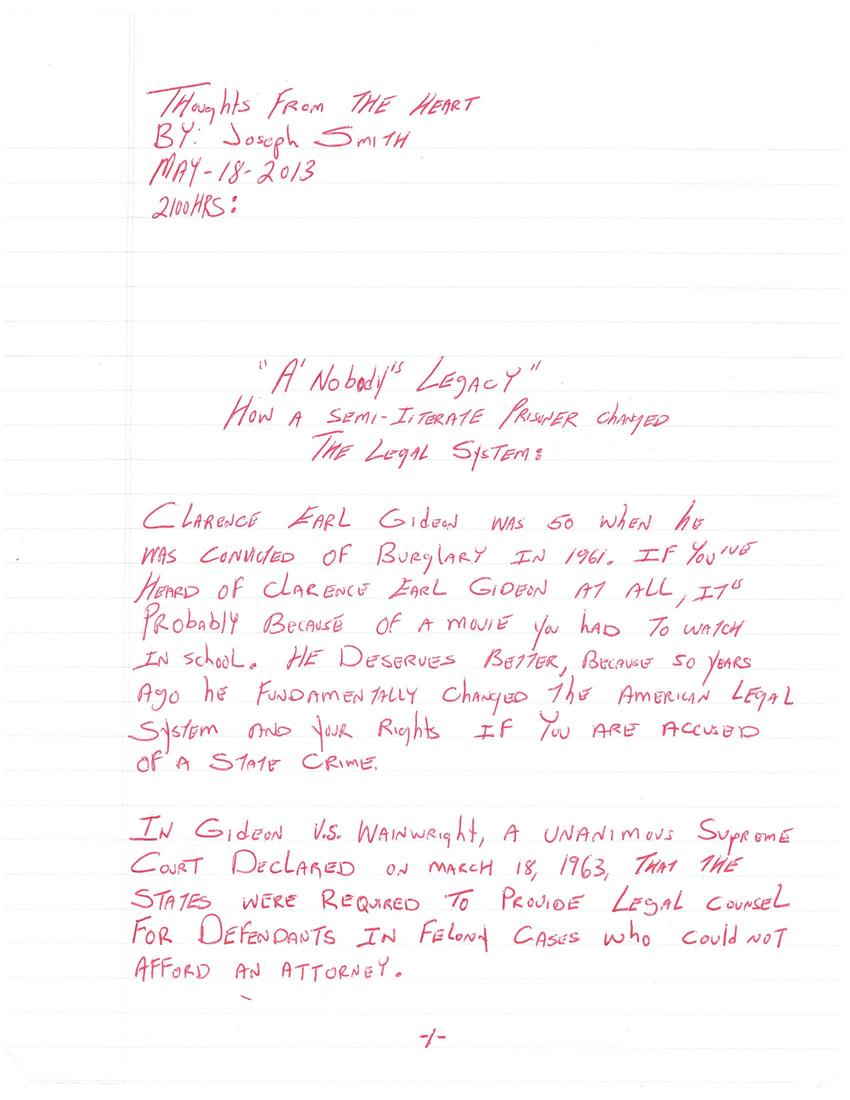 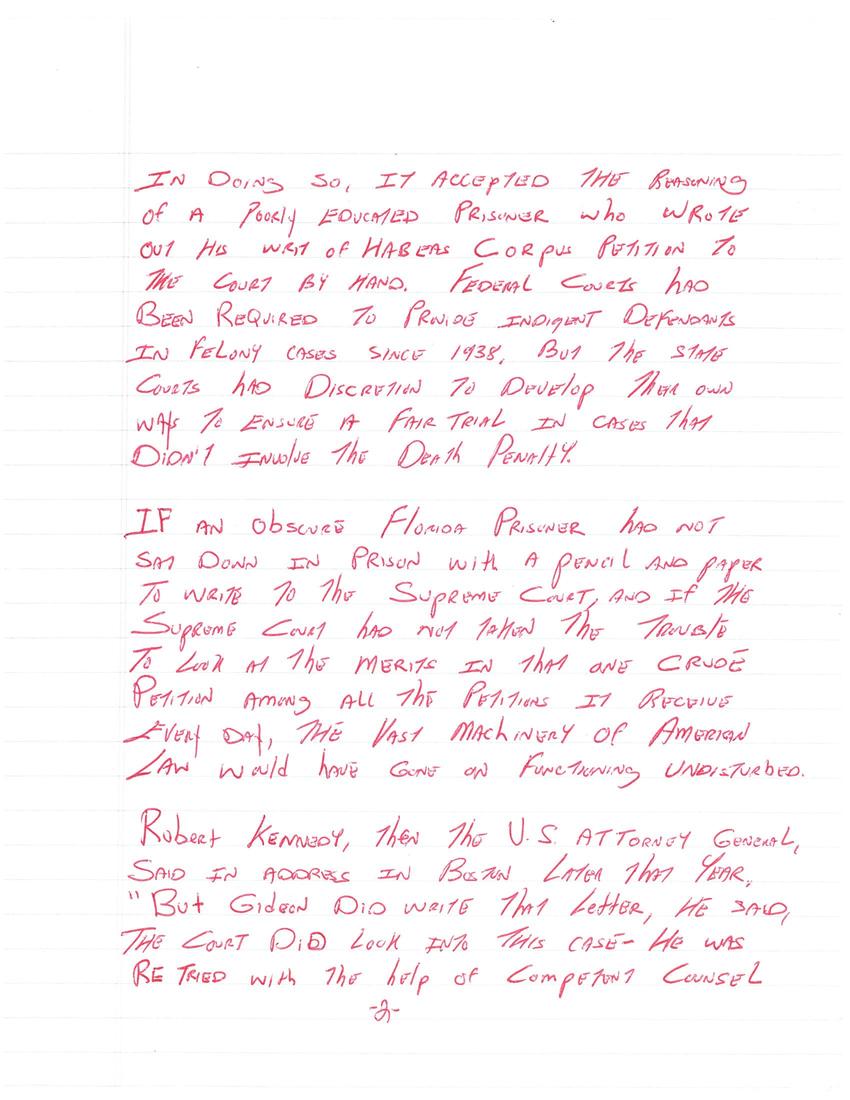 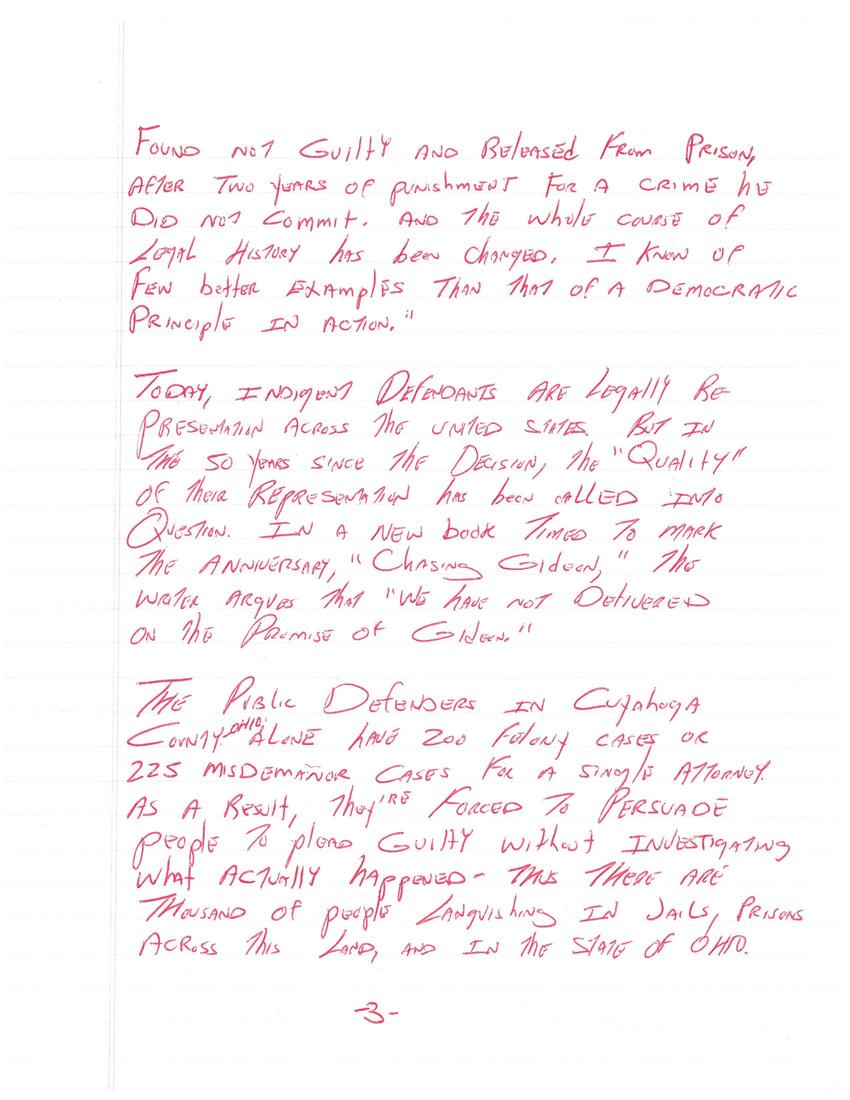 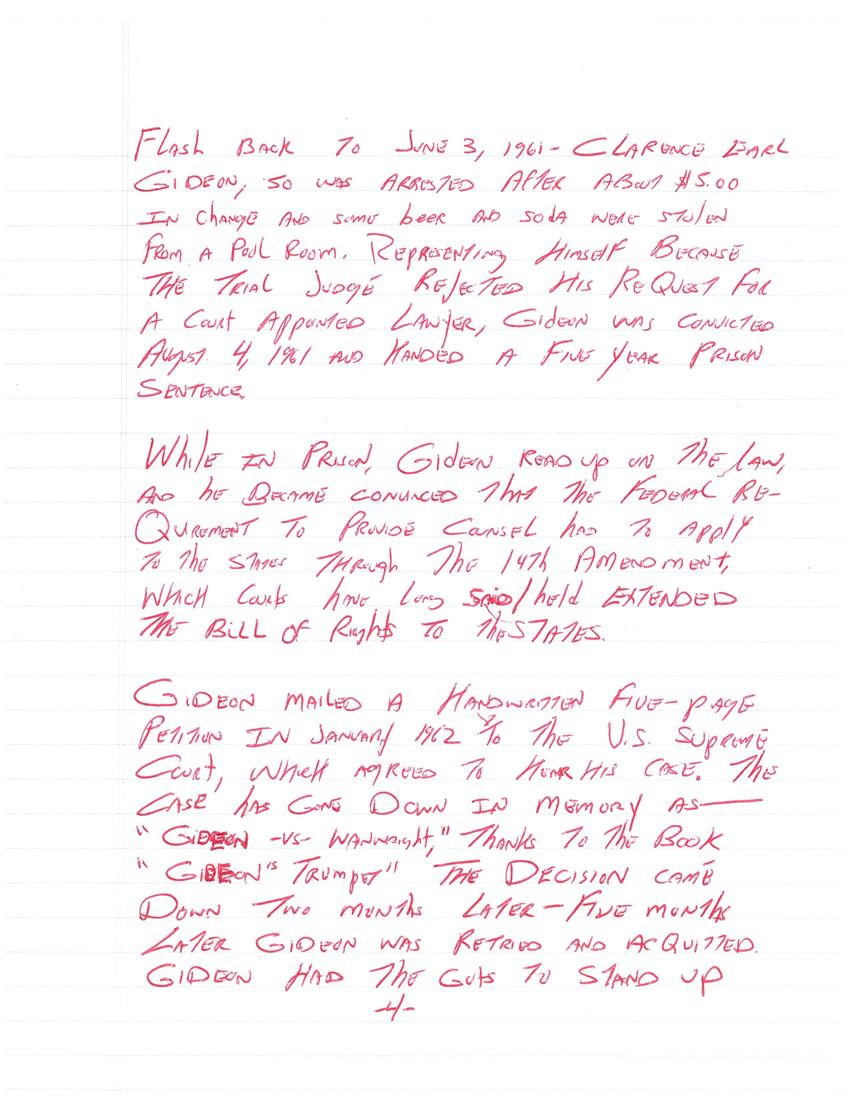 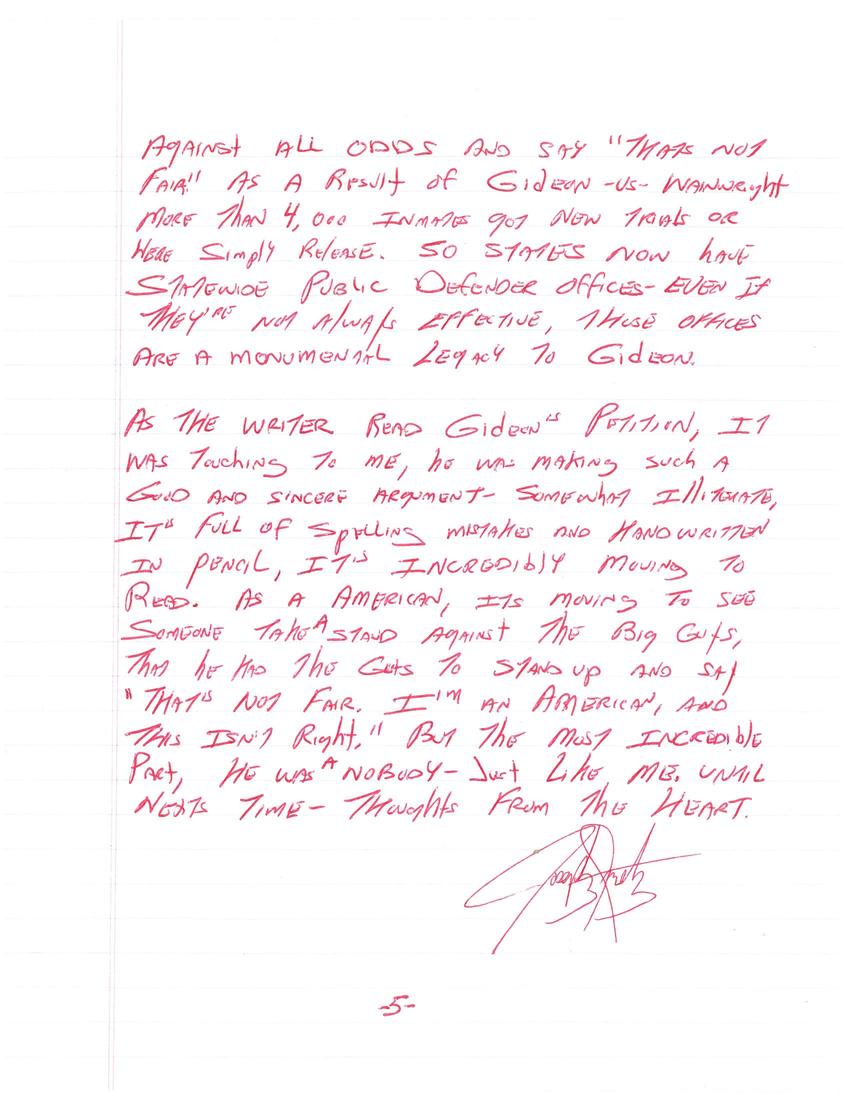 "A Nobody Legacy"
How a semi-literate prisoner changed the legal system:

Clarence Earl Giden was 50 when he was convicted of burglary in 1961. If you've heard of Clarence Earl Gideon at all, it's probably because of a movie you had to watch in school. He deserves better, because 50 years ago he fundamentally changed the American legal system and your rights if you are accused of a state crime.

In Gideon V.S Wainwright, a unanimous supreme court declared on March 18, 1963, that the states were required to provide legal counsel for defendants in felony cases who could not afford an attorney.

In doing so, it accepted the reasoning of a poorly educated prisoner who wrote out His writ of Habeas Corpus petition to the court by hand. Federal Courts had been required to provide indigent defendants in felony cases since 1938. But the state courts had discretion to develop their own ways to ensure a fair trial in cases that didn't involve the death penalty.

If an obscure Florida prisoner had no sat down in prison with a pencil and paper to write to the Supreme Court, and if the Supreme Court had no taken the trouble to look at the merits in that one crude petition among all the petitions it received every day, the vast machinery of American Law would have gone on functioning undisturbed.

Robert Kennedy, the the U.S Attorney General, said in address in Boston later that year "But Gideon did write that letter, he said, the court did look into this case - he was re tried with the help of competent counsel found No1 guilty and released from prison, after two years of punishment for a crime he did not commit. And the whole course of legal history has been changed. I know of few better examples than that of a democratic principle in action."

Today, indigent defendants are legally representation across the United States. But in the 50 years since the decision, the "quality" of the representation has been called into question. In a new book timed to mark the anniversary, "chasing Gideon," the writer argues that "we have not delivered on the promise of Gideon."

The Public Defenders in Cuyahoga County (Ohio) alone have zoo felony cases or 225 misdemanor cases for a single attorney. As a result, they're forced to persuade people to plead guilty without investigating what actually happened. Thus there are thousands of people languishing in jails, prisons across the land, and in the state of Ohio.

Flash back to June 3, 1961 - Clarance Earl Gideon, so was arrested after about $5.00 in change and some beer and soda were stolen from a pool room. Representing himself because the trial judge rejected his request for a court appointed lawyer, Gideon was convicted August 4,1961 handed a five year prison sentence.

While in prison, Gideon read up on the law and he became convinced that the federal requirement to provide counsel has to apply to the states through the 147th amendment, which courts have long said/held extended the bill of rights to the states.

Gideon mailed a handwritten five-page petition in January 1962 to the U.S Supreme Court, which agreed to hear his case. The case has gone down in memory as "Gideon V.S Wanwright," thanks to the book "Gideon's Trumpet." The decision came down two months later - five months later Gideon was retried and aquitted. Gideon had the guts to stand up against all odds and say "that's not fair" as a result of Gideon V.S Wanright more than 4,000 inmates got new trials or were simply release. So states now have statewide public defender offices - even if they're not always effective, those offices are a monumental legacy to Gideon.

As the writer read Gideon's petition, it was touching to me, he was making such a good and sincere argument - somewhat illiterate, it's full of spelling mistakes and handwritten in pencil. It's incredibly moving to read. As an American, it's moving to see someone take a stand against the big guys, that he had the guts to stand up and say "that's not fair. I'm an American, and this isn't right." But the most incredible part, he was a nobody - just. Like me. Unit next time - thoughts from the heart.