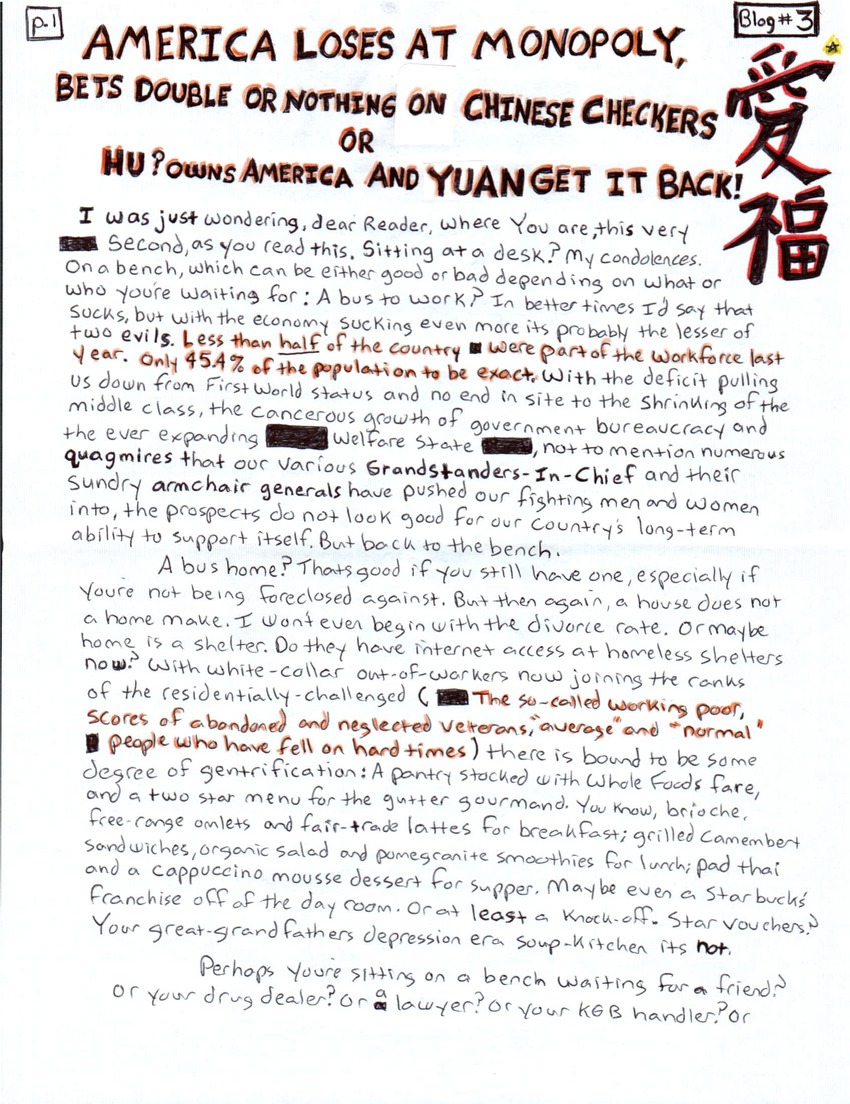 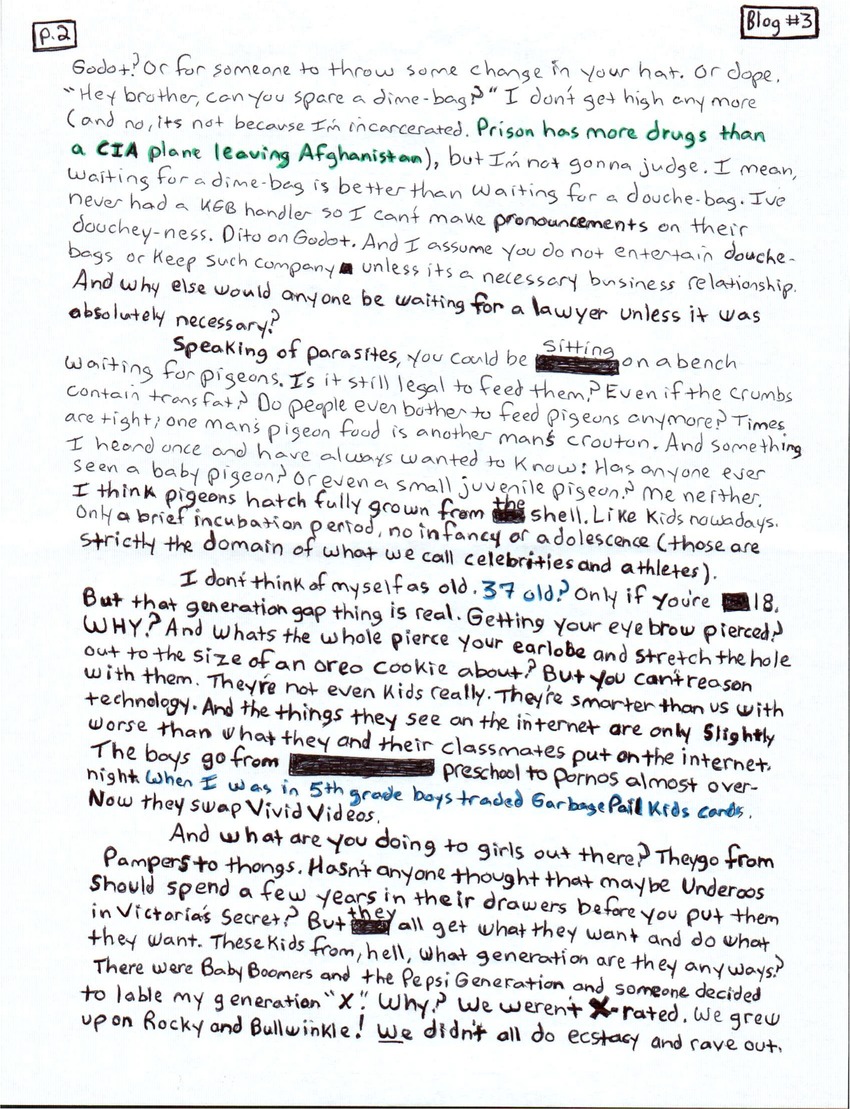 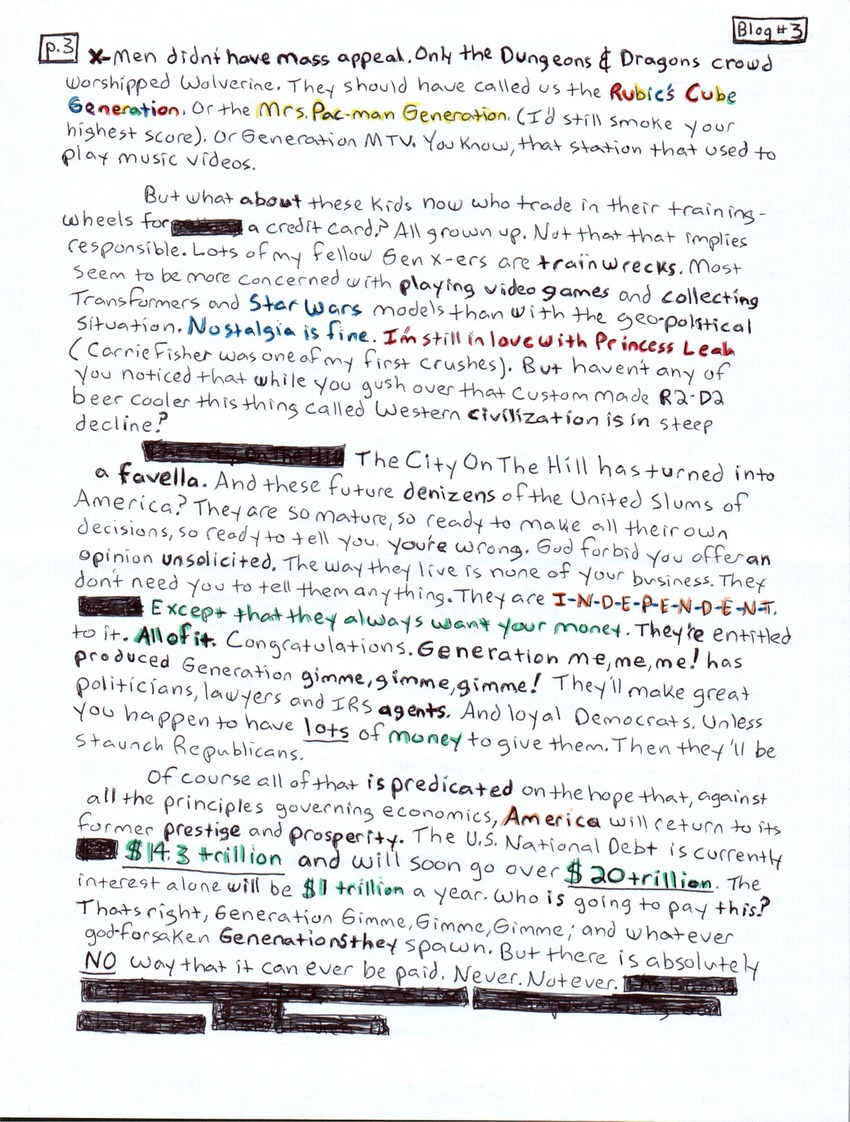 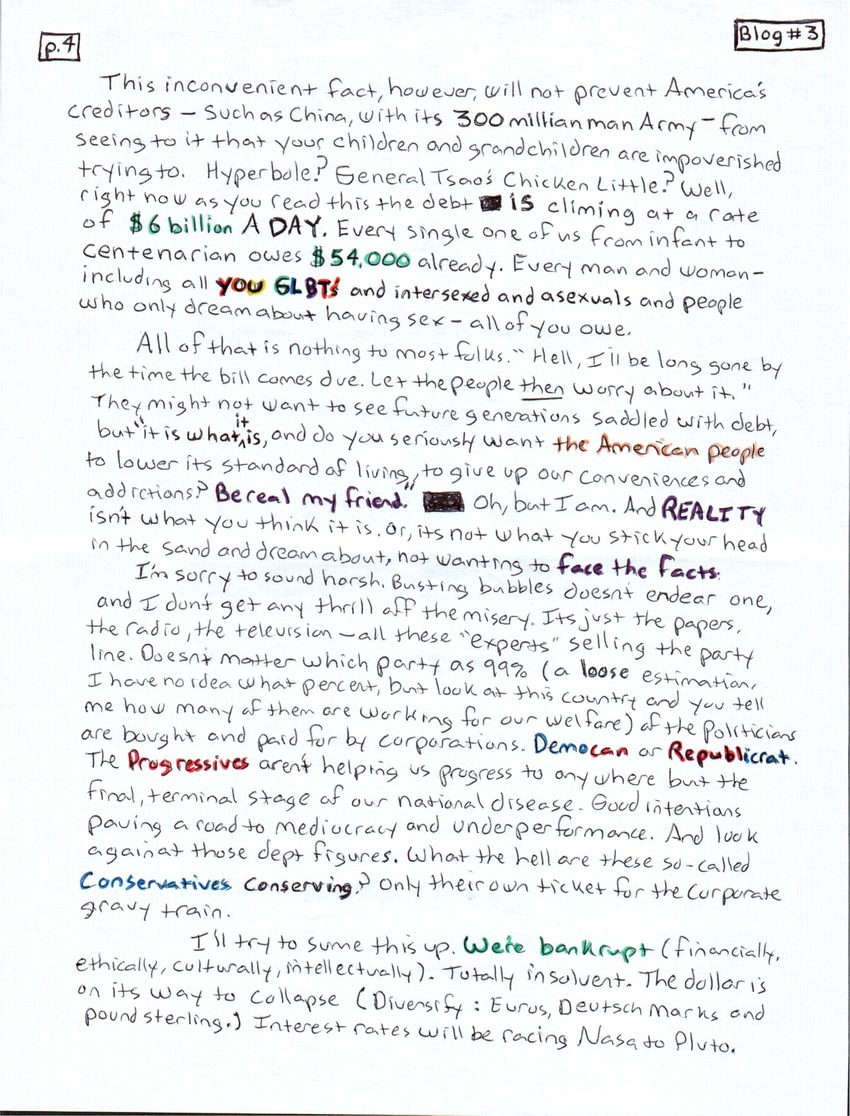 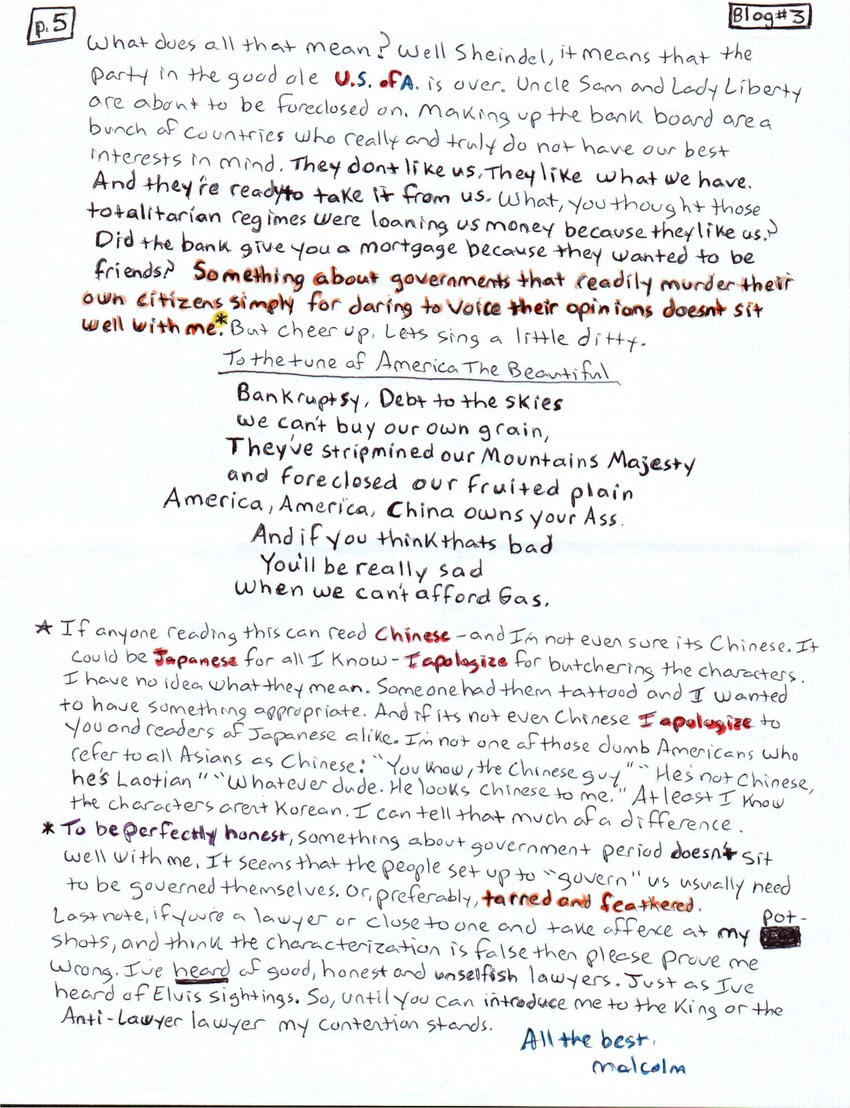 America Loses At Monopoly, Bets Double or Nothing on Chinese Checkers or HU? Owns American and YUAN Get it Back

I was just wondering, dear Reader, where you are, this very second, as you read this. sitting at a desk? My condolences. On a bench, which can be either good or bad depending on what or who you're waiting for: a bus to work? In better times I'd say that sucks, but with the economy sucking even more its probably the lesser of two evils. Less than half of the country were part of the workforce last year. Only 45.4% of the population to be exact. With the deficit pulling us down from First World Status and no end in site to the shrinking of the middle class, the cancerous growth of government bureaucracy and the ever expanding welfare state, not to mention numerous quagmires that our various grandstanders-in-chief and their sundry armchair generals have pushed our fighting men and women into, the prospects do not look good for our country's long-term ability to support itself. But back to the bench.
A bus home? Thats good if you still have one, especially if you're not being foreclosed against. But then again, a house does not a home make. I won't even begin with the divorce rate. Or maybe home is a shelter. Do they have internet access at homeless shelters of the residentially-challenged (The so-called working poor, people of abandoned and neglected veterans, "average" and "normal" people who have fell on hard times) there is bound to be some degree of gentrification: a pantry stocked with whole foods fare, free range omelets and fair trade lattes for breakfast; grilled camembert sandwiches, organic salad, and pomegranate smoothies for lunch; pad thai and a cappuccino mousse dessert for supper. Maybe even a Starbuck's franchise off at the day room. or at least a knock off. star vouchers? your great-grandfathers depression era soup kitchen its not.
Perhaps you're sitting on a bench waiting for a friend? or your a drug dealer? or a lawyer? or your KGB handler? or go dot? or for someone to throw some change in your hat. or dope. "hey brother, can you spare a dime-bag?" I don't get high anymore (and no, its not because I'm incarcerated. Prison has more drugs than a CIA plane leaving Afghanistan), but I'm not gonna judge. I mean, waiting for a dime-bag is better than waiting for a douche-bag. Ive never had a KGB handler so I can't make pronouncements on their douchey-ness. Ditto on Godot. And I assume you do not entertain douche-bags or keep such company unless its a necessary business relationship. And why else would anyone be waiting for a lawyer unless it was absolutely necessary?
Speaking of parasites, you could sitting on a bench waiting for pigeons. Is it still legal to feed them? Even if the crumbs contain trans fat? Do people even bother to geed pigeons anymore? Times are tight; one man's pigeon food is another man's crouton. And something I heard once and have always wanted to know: Has anyone ever seen a baby pigeon? Or even a small juvenile pigeon? me neither. I think pigeons hatch fully grown from the shell. Like kids nowadays. Only a brief incubation period, no infancy or adolescence (those are strictly the domain of what we call celebrities and athletes).
I don't think of myself as old. 37 old? Only if you're 18. But that generation gap thing is real. Getting your eyebrow pierced? WHY? And what's the whole pierce earlobe and stretch the hole out to the size of an oreo cookie about? But you can't reason with them. They're not even kids really. They're smarter than us with technology. And the things they see on the internet are only slightly worse than what they and their classmates put on the internet. The boys go from preschool to pornos almost overnight. When I was in 5th grade boys traded Garbage Pail Kids Cards. Now they swap vivd videos.
And what are you doing to girls out there? They go from pampers to thongs. Hasn't anyone thought that maybe Underoos should spend a few years in their drawers before you put them in Victoria's Secret? But they all get what they wand and do what they want. These kids, from hell, what generation are they anyways. There were Baby Boomers and the Pepsi Generation and someone decided to label my generation"x"! Why? We weren't X-rated. We grew up on Rocky and Bullwinkle! We didn't all do ecstasy and rave out. X-men didn't have mass appeal. Only the Dungeons & Dragons crowd worshipped Wolverine. They should have called us the Rubik's Cube Generation. Or the Mrs. Pac-man Generation. (I'd still smoke your highest score). Or Generation MTV. You know, that station that used to play music videos.

But what about these kids now who trade in their training wheels for a credit card? All grown up. Not that that implies responsible. Lots of my fellow Gen X-ers are train wrecks. Most seem to be more concerned with playing videogames and collecting transformers and star wars models than with the geo-political situation. Nostalgia is fine. I'm still in love with Princess Leah (Carrie Fisher was one of my first crushes). But haven't any of you noticed that while you gush over that custom made R2-D2 beer cooler this thing called Western Civilization is in steep decline?
The City on The Hill has turned into a favella. And these future denizens of United Slums of America? They are so mature, so ready to make all their own decisions, so ready to tell you. you're wrong. god forbid you offer and opinion unsolicited. the way they live is none of your business. they don't need you to tell them anything. they are I-N-D-E-P-E-N-D-E-N-T. Except that they always want your money. They're entitled to it. All of it. Congratulations. Generation me, me, me! has produced generation gimme, gimme, gimme! They'll make great politicians, lawyers and IRS agents. And loyal democrats. Unless you happen to have lots of money to give them. Then they'll be staunch republicans.
Of course all of that is predicated on the hope that, against all the principles governing economics, America will return to its former prestige and prosperity. The U.S. National Debt is currently $14.3 trillion and will soon go over $20 trillion. The interest alone will be $1 trillion a year. Who is going to pay this? Thats right, Generation Gimme, Gimme, Gimme; and whatever godforsaken generations they spawn. But there is absolutely NO way that it can ever be paid. Never. Not ever.

This inconvenient fact, however, will not prevent America's creditors - such as China, with its 300 million man Army - from seeing to it that your children and grandchildren are impoverished trying to. Hyperbole? General Tsao's Chicken Little? Well, right now as you read this the debt is climbing at a rate of $6 billion A DAY. Every singly one of us from infant to centenarian owes $54,000 already. Every man and woman - including all you GLBT's and intersected and asexuals and people who only dream about having sex - all of you owe.
All of that is nothing to most folks. "hell, ill be long gone by the time the bill comes due. let the people then worry about it." they might not want to see future generations saddled with debt. but "it is what it is, and do you seriously want the American people to lower its standard of living, to give up our conveniences and addictions? Be Real my friend" oh, but i am. and reality isn't what you think it is. or, its not what you stick your head in the sand and dream about, not wanting to face the facts.
i'm sorry to sound harsh. bursting bubbles doesn't endear one, and i don't get any thrill off the misery. its just the papers, the radio, the television - all these "experts" selling the party line. Doesn't matter which party as 99% (a loose estimation, I have no idea what percent, but look at this country and you tell me how many of them are working for our welfare) of the politicians are bought and paid for by corporations. Democan or Republicrat. The Progressives aren't helping us process to anywhere but the final terminal stage of our national disease. good intentions paving a road to mediocracy and underperformance. and look again at those dept figures. what the hell are these so -called conservatives conserving? only their own ticket for the corporate gravy train.
ill try to sum this up. we're bankrupt (financially, ethically, culturally, intellectually). Totally insolvent. The dollar is on its way to collapse (Diversify: Euros, Deutschmarks and pound sterling.) Interest rates will be racing NASA to Pluto.
What does all that mean? Well Sheindel, it means that the party in the good ole U.S. of A. is over. Uncle Sam and Lady Liberty are about to be foreclosed on. Making up the bank board are a bunch of countries who really and truly do not have our best interests in mind. They don't like us, they like what we have. And they're ready to take it from us. What, you thought those totalitarian regimes were loaning us money because they like us? Did the bank give you a mortgage because they wanted to be friends? Something about governments that readily murder their own citizens simple for daring to voice their opinions doesn't sit well with me. But here up. Lets Sing a little ditty.
To the tune of America the Beautiful
Bankrupt$y, Debt to the skies
We can't buy our own grain,
They've strip-mined our mountains majesty
and foreclosed our fruited plain
America, America, China owens your ass
And if you think thats bad
You'll be really sad
When we can't afford Gas.

*If anyone reading this can read Chinese - and I'm not even sure its Chinese. It could be Japanese for all I know - I apologize for butchering the characters. I have no idea what they mean. Someone had them tattooed and i wanted to have something appropriate. and its not even chinese I apologize to you and readers of Japanese alike. I'm not one of those dumb Americans who refers to all Asians as Chinese: "You know, the Chinese guy" "He's not Chinese, he' Laotian" "Whatever Dude. He looks Chinese to me." At least I know the characters aren't Korean. I can tell that much of a different.
*To be perfectly honest, something about government period doesn't sit well with me. It seems that the people set up to "govern" us usually need to be governed themselves. or, preferably, tarred and feathered.
Last note, if you're a lawyer or close to one and take offense at my pot-shots, and think the characterization is false then please prove me wrong. I've heard of good, honest and unselfish lawyers. Just as I've heard of Elvis sightings. So, until you can introduce me to the King or the Anti-Lawyer lawyer my contention stands.
All the best,
Malcolm