More T.V. Commentary and It's Display Of Society 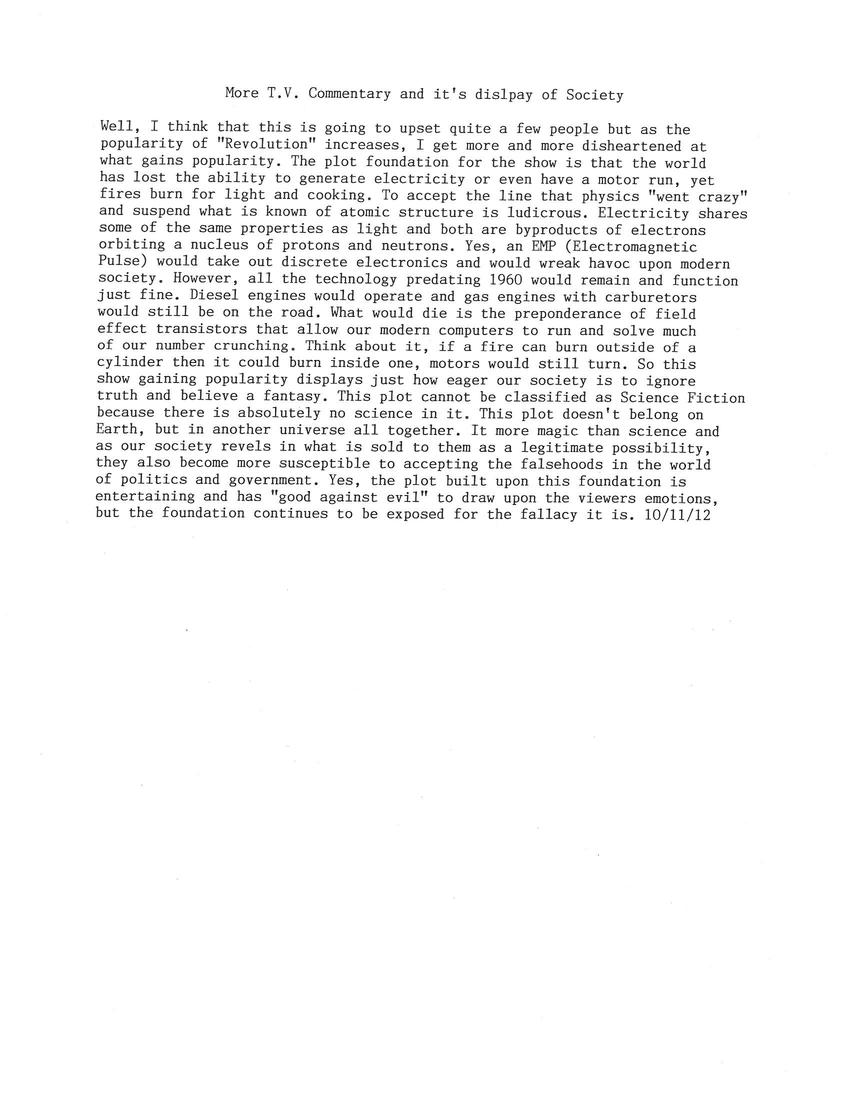 More T.V. Commentary and its display of Society

Well, I think that this is going to upset quite a few people but as the popularity of "Revolution" increases, I get more and more disheartened at what gains popularity. The plot foundation for the show is that the world has lost the ability to generate electricity or even have a motor run, yet fires burn for light and cooking. To accept the line that physics "went crazy" and suspend what is known of atomic structure is ludicrous. Electricity shares some of the same properties as light and both are byproducts of electrons orbiting a nucleus of protons and neutrons. Yes, an EMP (Electromagnetic Pulse) would take out discrete electronics and would wreak havoc upon modern society. However, all the technology pre-dating 1960 would remain and function just fine. Diesel engines would operate and gas engines with carburettors would still be fine on the road. What would die is the preponderance of field effect transistors that allow our modern computers to run and solve much of our number crunching. Think about it, if a fire can burn outside of a cylinder then it could burn inside one, motors would still turn. So this show gaining popularity displays just how eager our society is to ignore truth and believe a fantasy. This plot cannot be classified as Science Fiction because there is absolutely no science to it. This plot doesn't belong on Earth, but in another universe all together. It's more magic than science and as our society revels in what is sold to them as a legitimate possibility, they also become more susceptible to accepting the falsehoods in the world of politics and government. Yes, the plot built upon this foundation is entertaining and has "good against evil" to draw upon the viewers' emotions, but the foundation continues to be exposed for the fallacy it is. 10/11/12

I don't know this show, but surely the "foundation" of a story is how the human beings react to the situation, even if said situation is inaccurate? Isn't that a more important truth?