Where Did My Son Get it From? 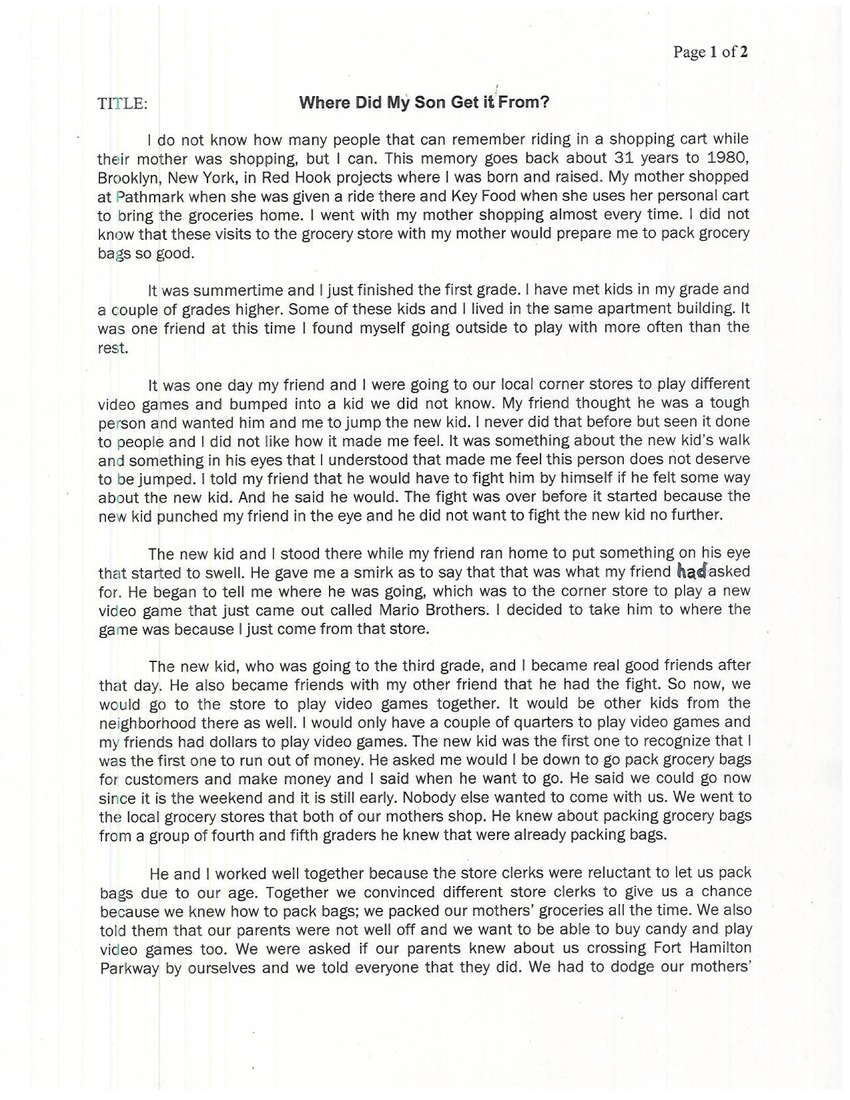 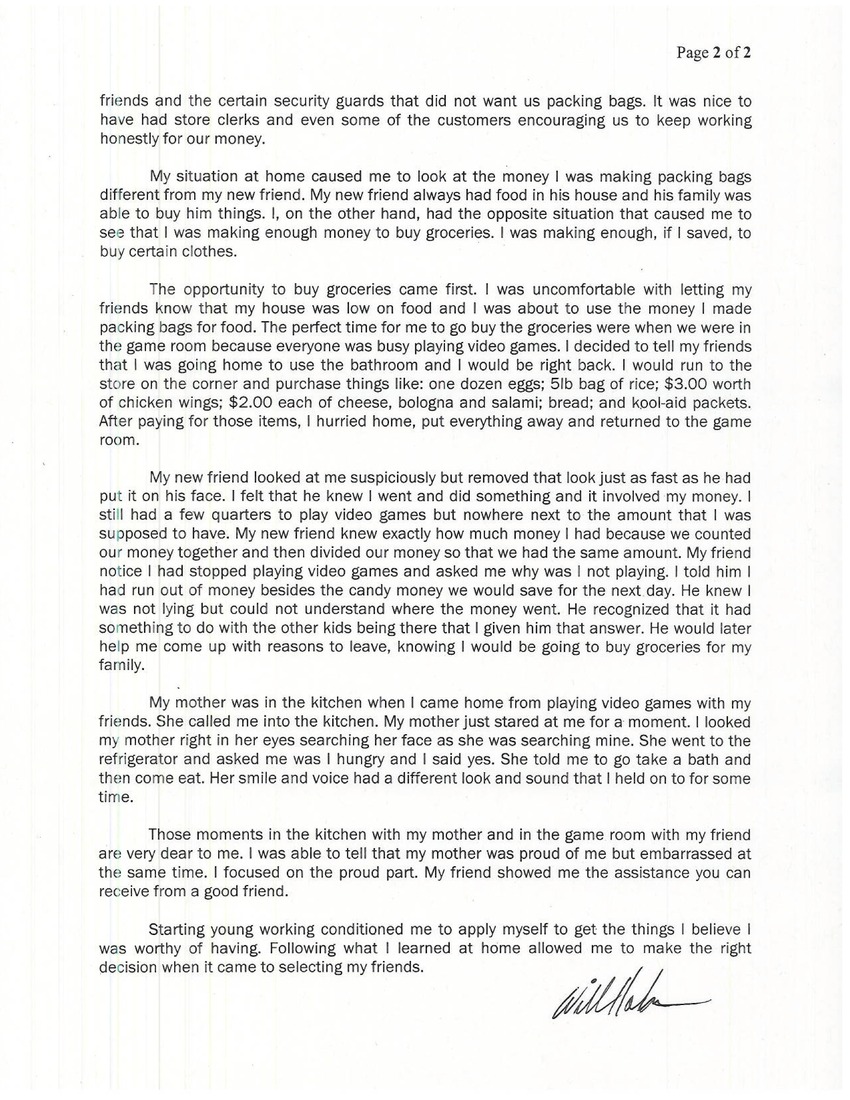 TITLE: Where Did My Son Get it From?

I do not know how many people that can remember riding in a shopping cart while their mother was shopping, but I can. This memory goes back about 31 years to 1980, Brooklyn, New York, in Red Hook projects where I was born and raised. My mother shopped at Pathmark when she was given a ride there and Key Food when she uses her personal cart to bring the groceries home. I went with my mother shopping almost every time. I did not know that these visits to the grocery store with my mother would prepare me to pack grocery bags so good.

It was summertime and I just finished the first grade. I have met kids in my grade and a couple of grades higher. Some of these kids and I loved in the same apartment building. It was one friend at this time I found myself going outside to play with more often than the rest.

It was one day my friend and I were going to our local corner stores to play different video games and bumped into a kid we did not know. My friend thought he was a tough person and wanted him and me to jump the new kid. I never did that before but seen it done to people and I did not like how it made me feel. It was something about the new kid's walk and something in his eyes that I understood that made me feel this person does not deserve to be jumped. I told my friend that he would have to fight him by himself if he felt some way about the new kid. And he said he would. The fight was over before it started because the new kid punched my friend in the eye and he did not want to fight the new kid no further.

The new kid and I stood there while my friend ran home to put something on his eye that started to swell. He gave me a smirk as to say that that was what my friend had asked for. He began to tell me where he was going, which was to the corner store to play a new video game that just came out called Mario Brothers. I decided to take him to where the game was because I just come from that store.

The new kid, who was going to the third grade, and I became real good friends after that day. He also became friends with my other friend that he had the fight. So now, we would go to the store to play video games together. It would be other kids from the neighbourhood there as well. I would only have a couple of quarters to play video games and my friends had dollars to play video games. The new kid was the first one to recognize that I was the first one to run out of money. He asked me would I be down to go pack grocery bags for customers and make money and I said when he want to go. He said we could go now since it is the weekend and it is still early. Nobody else wanted to come with us. We went to the local grocery stores that both of our mothers shop. He knew about packing grocery bags from a group of fourth and fifth graders he knew that were already packing bags.

He and I worked well together because the store clerks were reluctant to let us pack bags due to our age. Together we convinced different store clerks to give us a chance because we knew how to pack bags; we packed out mothers' groceries all the time. We also told them that our parents were not well off and we want to be able to buy candy and play video games too. We were asked if our parents knew about us crossing Fort Hamilton Parkway by ourselves and we told everyone that they did. We had to dodge our mothers' friends and the certain security guards that did not want us packing bags. It was nice to have had store clerks and even some of the customers encouraging us to keep working honestly for our money.

The opportunity to buy groceries came first. I was uncomfortable with letting my friends know that my house was low on food and I was about to use the money I made packing bags for food. The perfect time for me to go buy the groceries were when we were in the game room because everyone was busy playing video games. I decided to tell my friends that I was going home to use the bathroom and I would be right back. I would run to the store on the corner and purchase things like: one dozen eggs; 5lb bag of rice; $3.00 worth of chicken wings; $2.00 each of cheese, bologna and salami; bread; and Kool-Aid packets. After paying for those items, I hurried home, put everything away and returned to the game room.

My new friend looked at me suspiciously but removed that look just as fast as he had put it on his face. I felt that he knew I went and did something and it involved my money. I still had a few quarters to play video games but nowhere next to the amount that I was supposed to have. My new friend knew exactly how much money I had because we counted our money together and the divided our money so that we had the same amount. My friend notice I had stopped playing video games and asked and asked me why was I not playing. I told him I had run out of money besides the candy money we would save for the next day. He knew I was not lying but could not understand where the money went. He recognized that it had something to do with the other kids being there that I given him that answer. He would later help me come up with reasons to leave, knowing I would be going to buy groceries for my family.

My mother was in the kitchen when I came home from playing video games with my friends. She called me into the kitchen. My mother just stared at me for a moment. I looked my mother right in her eyes searching her face as she was searching mine. She went to the refrigerator and asked me was I hungry and I said yes. She told me to go take a bath and then come eat. Her smile and voice had a different look and sound that I held on to for some time.

Those moments in the kitchen with my mother and in the game room with my friend are very dear to me. I was able to tell that my mother was proud of me but embarrassed at the same time. I focused on the proud part. My friend showed me the assistance you can receive from a good friend.

Starting young working conditioned me to apply myself to get the things I believe I was worthy of having. Following what I learned at home allowed me to make the right decision when it came to selecting my friends.