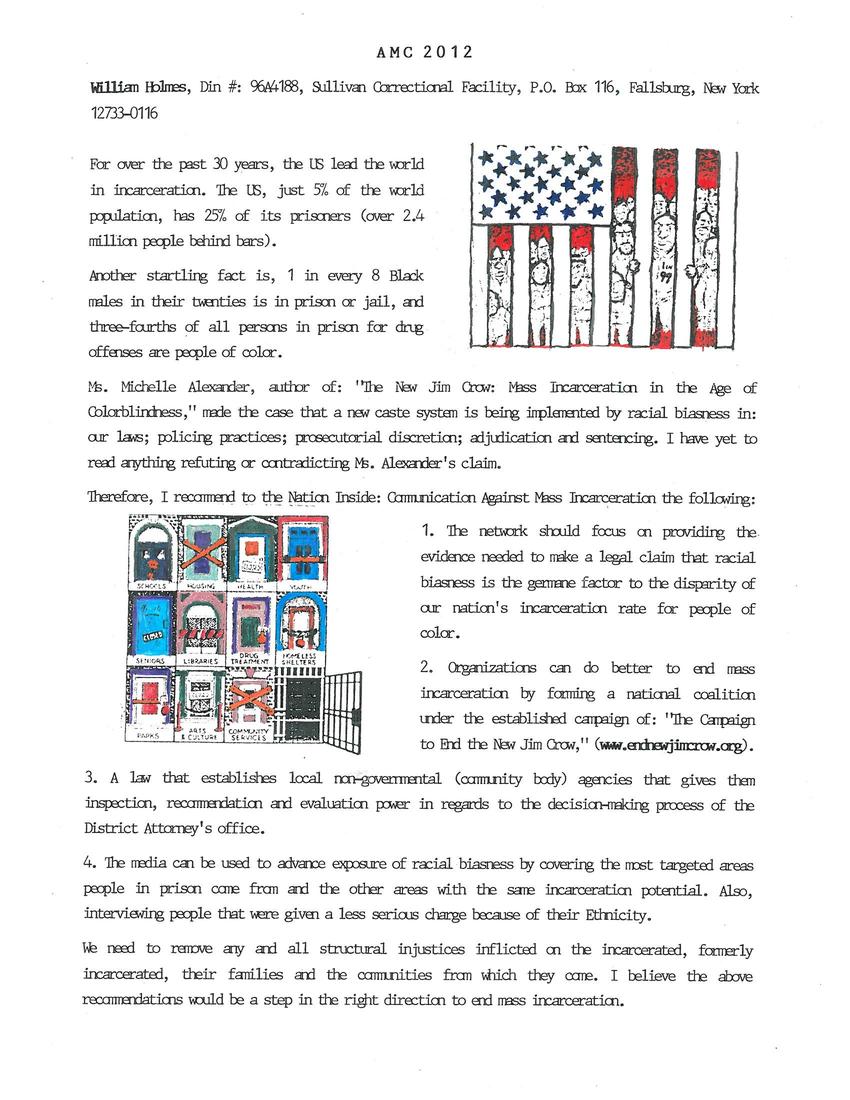 For over the past 30 years, the US lead the world in incarceration. The US, just 5% of the world population, has 25% of its prisoners (over 2.4 million people behind bars).

Another startling fact is, 1 in every 8 Black males in their twenties is in prison or jail, and three-fourths of all person in prison for drug offenses are people of color.

Ms. Michelle Alexander, author of: 'The New Jim Crow: Mass Incarceration in the Age of Colorblindness," made the case that a new caste system is being implemented by racial biasness in: our laws; policing practices; prosecutorial discretion; adjudication and sentencing. I have yet to read anything refuting or contradicting Ms. Alexander's claim.

Therefore, I recommend to the Nation Inside: Communication Against Mass Incarceration the following:

1. The network should focus on providing the evidence needed to make a legal claim that racial biasness is the germane factor to the disparity of our nation's incarceration rate for people of color.

2. Organizations can do better to end mass incarceration by forming a national coalition under the established campaign of: "The Campaign to End the New Jim Crow," (www.endnewjimcrow.org).

3. A law that establishes local non-governmental (community body) agencies that gives them inspection, recommendation and evaluation power in regards to the decision-making process of the District Attorney's office.

4. The media can be used to advance exposure of racial biasness by covering the most targeted areas people in prison come from and the other areas with the same incarceration potential. Also, interviewing people that were given a less serious charge because of their Ethnicity.

We need to remove any and all structural injustices inflicted on the incarcerated, formerly incarcerated, their families and the communities from which they come. I believe the above recommendations would be a step in the right direction to end mass incarceration.