Johnny and the Boogerman 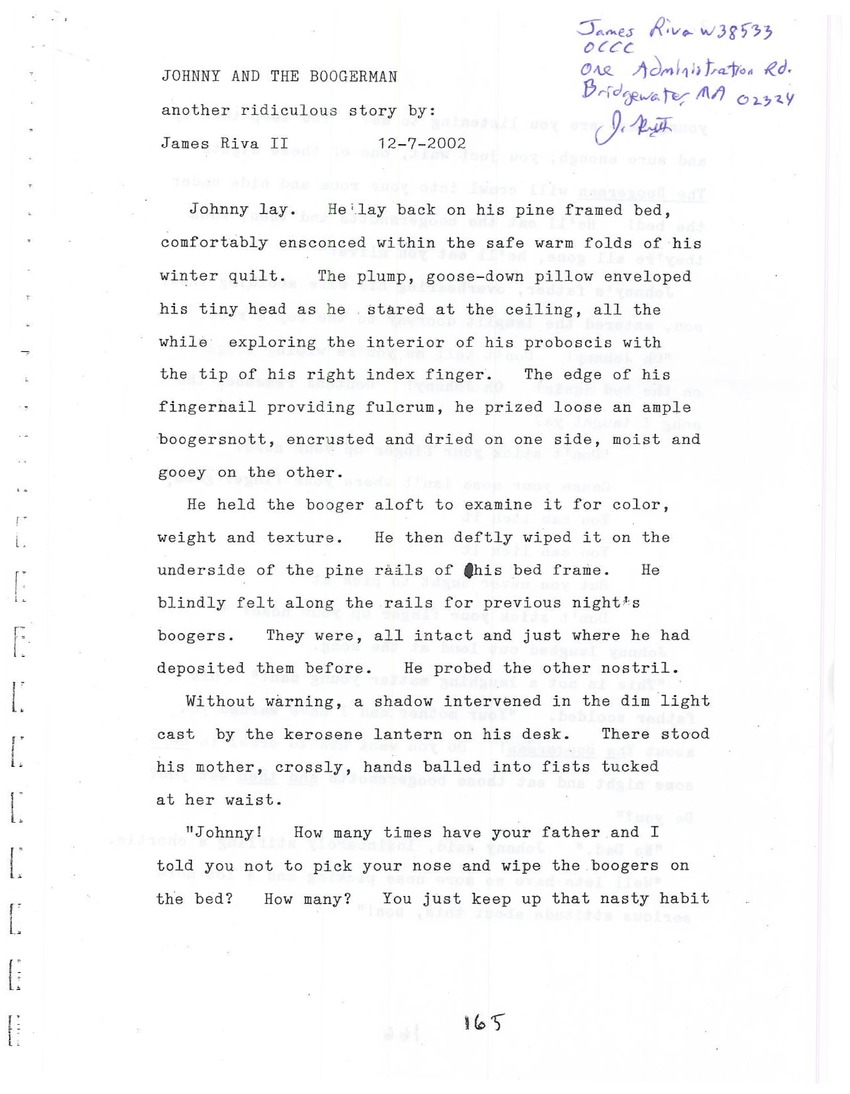 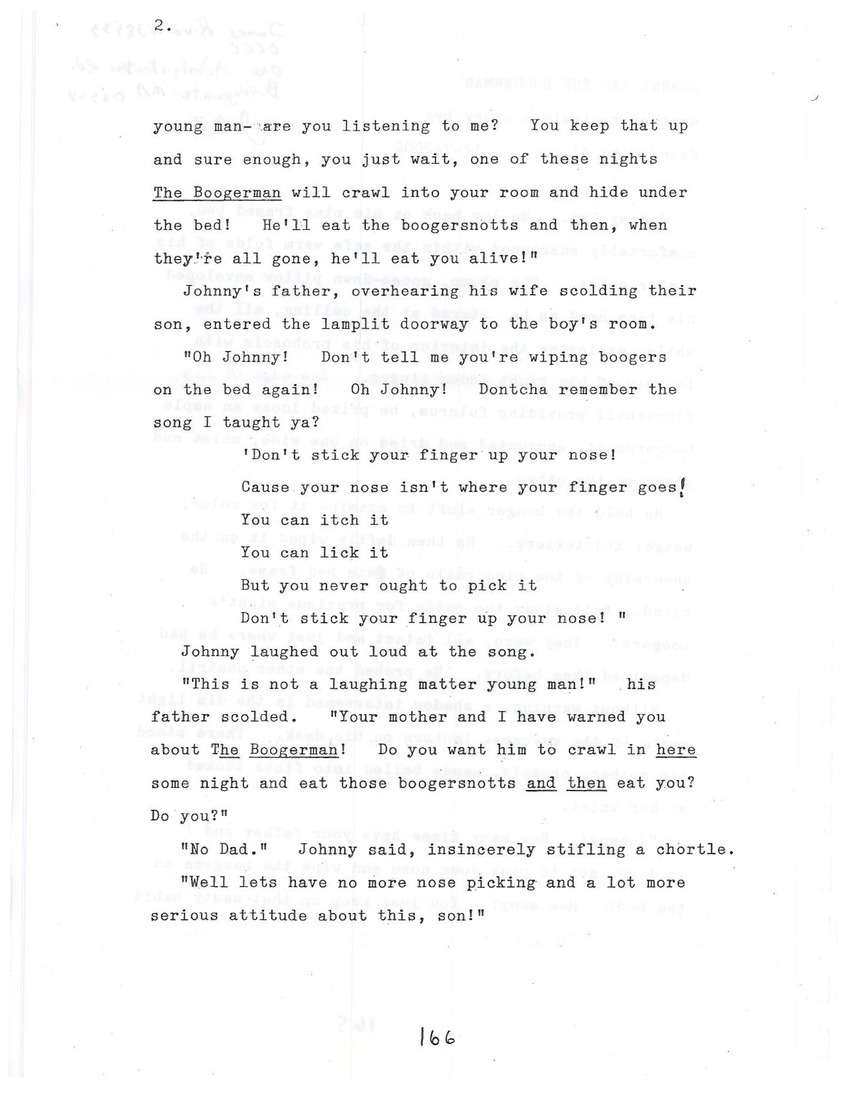 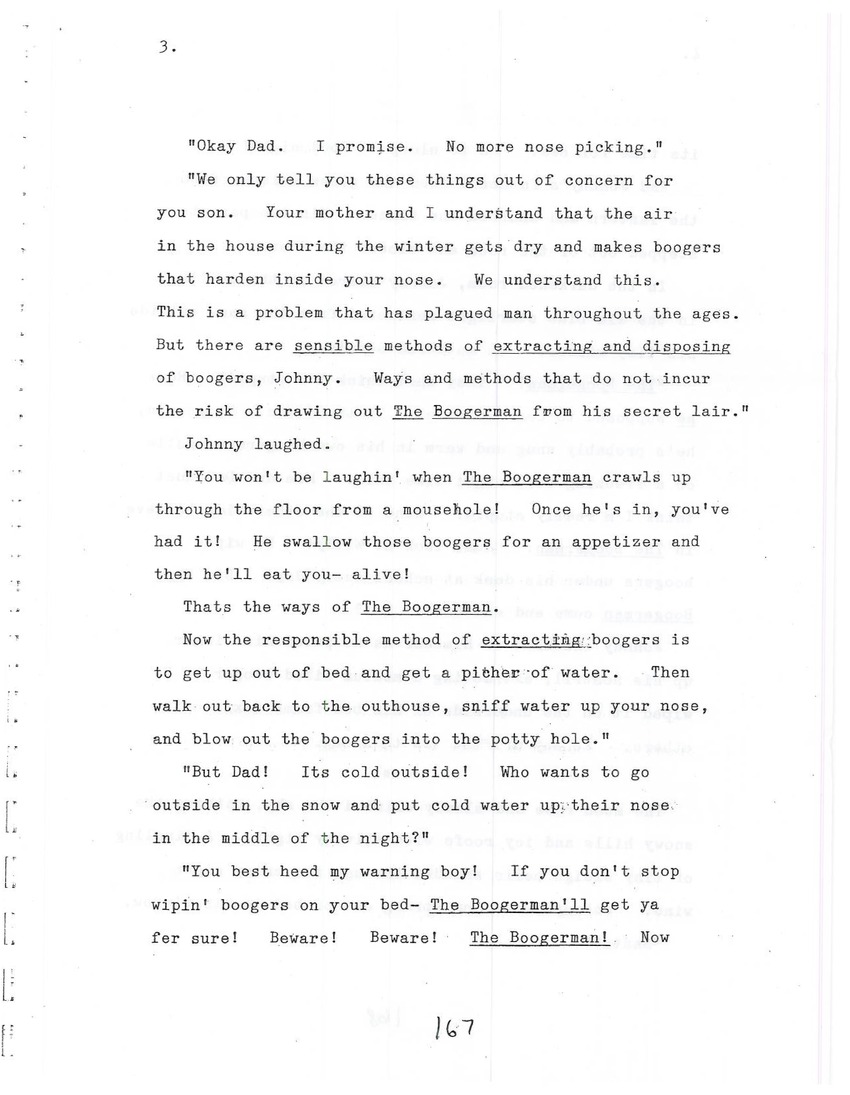 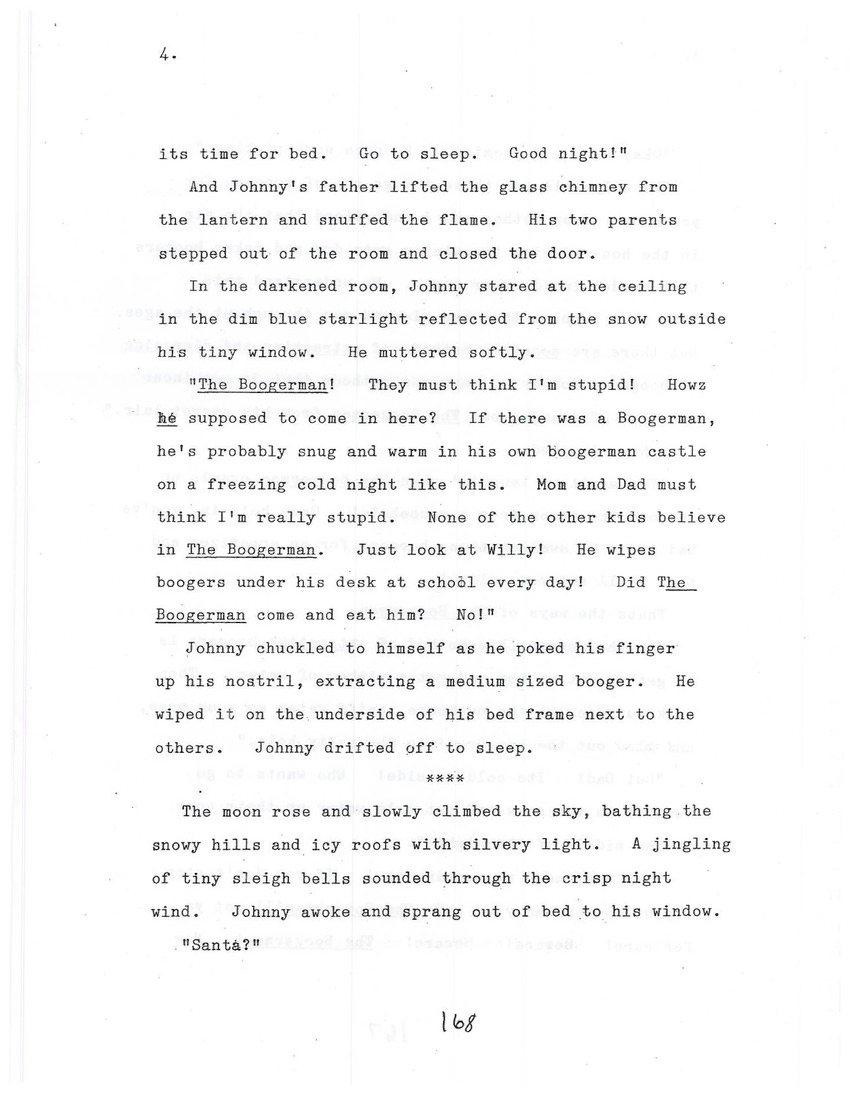 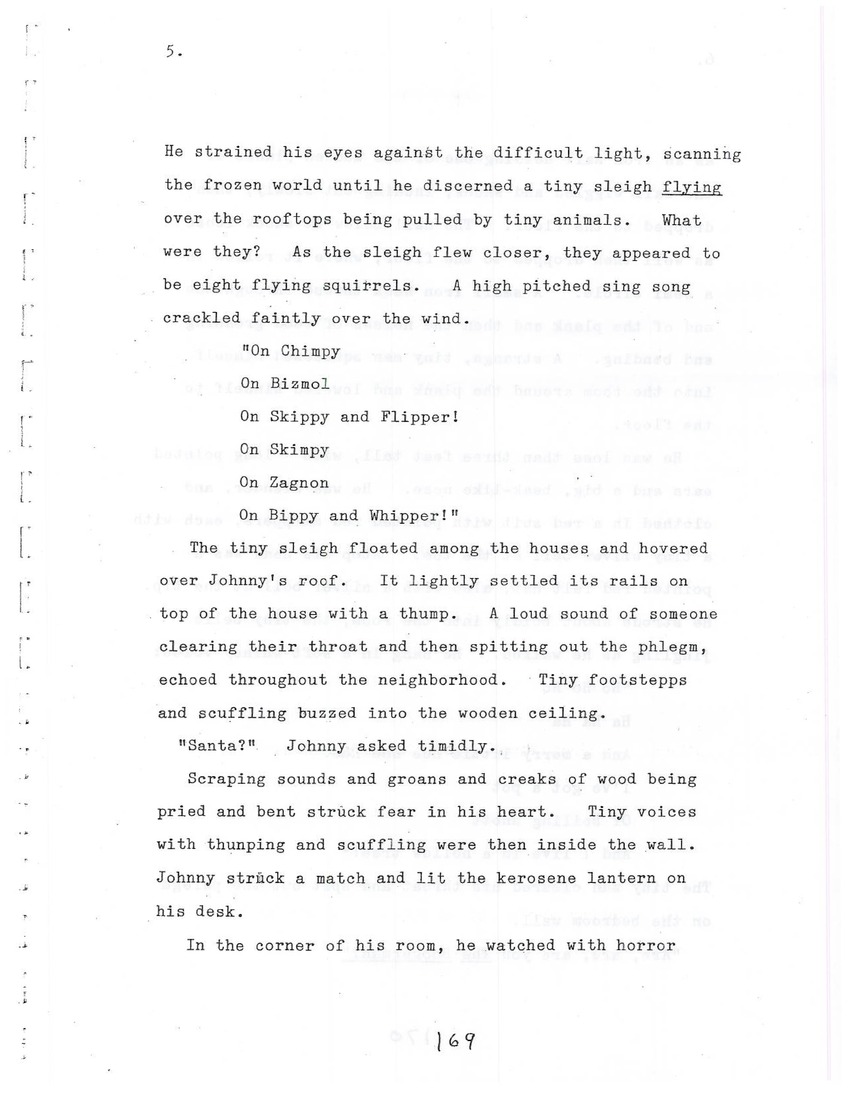 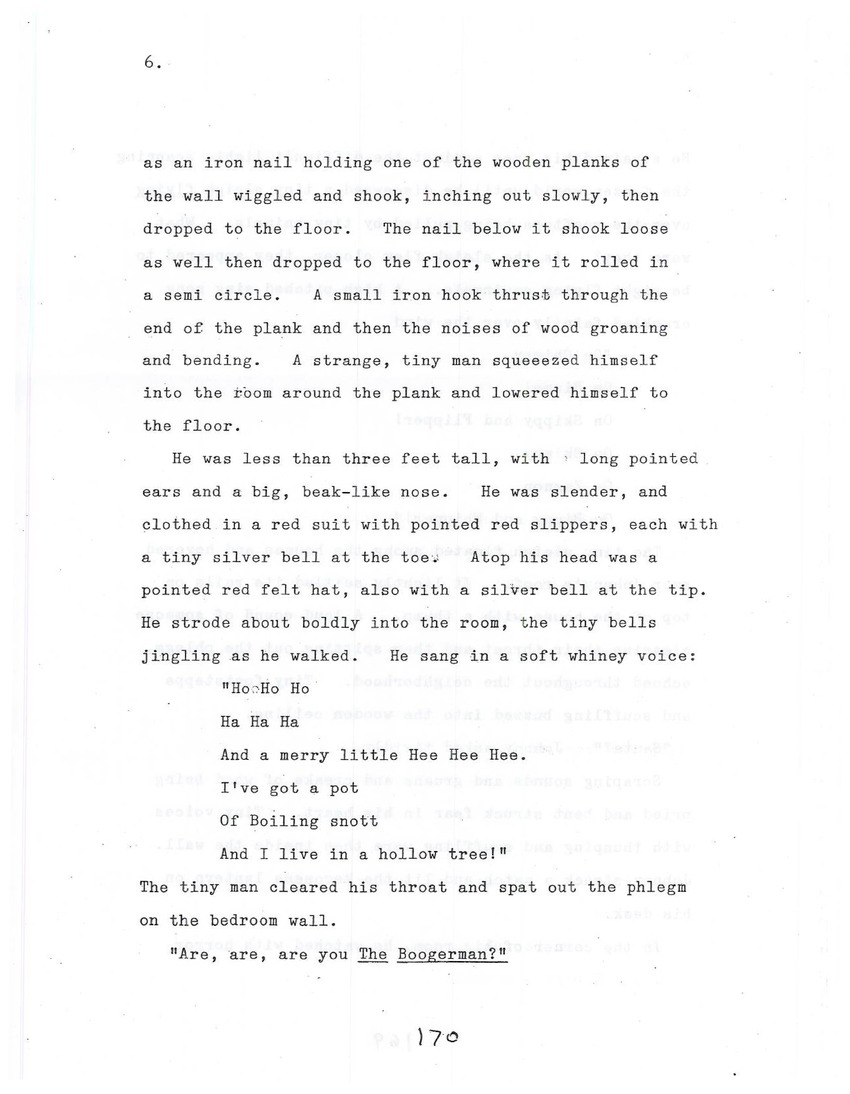 JOHNNY AND THE BOOGERMAN
Another ridiculous story by:
James Riva II
12-7-2002

Johnny lay. He lay back on his pine framed bed, comfortably ensconced within the safe warm folds of his winter quilt. The plump, goose-down pillow enveloped his tiny head as he stared at the ceiling, all the while exploring the interior of his proboscis with the tip of his right index finger. The edge of his fingernail providing fulcrum, he prised loose an ample boogersnott, encrusted and dried on one side, moist and gooey on the other.

He held the booger aloft to examine it for color, weight and texture. He then deftly wiped it on the underside of the pine rails of his bed frame. He blindly felt along the rails for previous night's boogers. They were all intact and just where he has deposited them before. He probed the other nostril.

Without warning, a shadow intervened in the dim light cast by the kerosene lantern on his desk. There stood his mother, crossly, hands balled into fists tucked at her waist.

"Johnny! How many times have your father and I told you not to pick your nose and wipe the boogers on the bed? How many? You just keep up that nasty habit young man - are you listening to me? You keep that up and sure enough, you just wait, one of these nights THE BOOGERMAN will crawl into your room and hide under the bed! He'll eat the boogersnotts and then, when they're all gone, he'll eat you alive!"

Johnny's father, overhearing his wife scolding their son, entered the lamplit doorway to the boy's room.

Johnny laughed out loud at the song.

"This is not a laughing matter young man!" his father scolded. "Your mother and I have warned you about THE BOOGERMAN! Do you want him to crawl in HERE some night and eat those boogersnotts AND THEN eat you? Do you?"

"No, Dad." Johnny said, insincerely stifling a chortle.
"Well let's have no more nose picking and a lot more serious attitude about this, son!"
"Okay Dad. I promise. No more nose picking."
"We only tell you these things out of concern for you son. Your mother and I understand that the air in the house during the winter gets dry and makes boogers that harden inside your nose. We understand this. This is a problem that has plagued man throughout the ages. But there are SENSIBLE methods of EXTRACTING AND DISPOSING of boogers, Johnny. Ways and methods that do not incur the risk of drawing out THE BOOGERMAN from his secret lair."
Johnny laughed.
"You won't be laughin' when THE BOOGERMAN crawls up through the floor from a mousehole! Once he's in, you've had it! He swallow those boogers for an appetizer and then he'll eat you – alive!
That's the way of THE BOOGERMAN.
Now the responsible method of EXTRACTING boogers is to get up out of bed and get a pitcher of water. Then walk out back to the outhouse, sniff water up your nose, and blow out the boogers into the potty hole."
"But Dad! It's cold outside! Who wants to go outside in the snow and put cold water up their nose in the middle of the night?"
"You best heed my warning boy! If you don't stop wipin' boogers on your bed – THE BOOGERMAN'll get ya fer sure! Beware! THE BOOGERMAN! Now it's time for bed. Go to sleep. Good night!"
And Johnny's father lifted the glass chimney from the lantern and snuffed the flame. His two parents stepped out of the room and closed the door.
In the darkened room, Johnny stared at the ceiling in the dim blue starlight reflected from the snow outside his tiny window. He muttered softly.
"THE BOOGERMAN! They must think I'm stupid! How's HE supposed to come in here? If there was a Boogerman, he's probably snug and warm in his own boogerman castle on a freezing cold night like this. Mom and Dad must think I'm really stupid. None of the other kids believe in THE BOOGERMAN. Just look at Willy! He wipes boogers under his desk at school every day! Did THE BOOGERMAN come and eat him? No!"
Johnny chuckled to himself as he poked his finger up his nostril, extracting a medium sized booger. He wiped it on the underside of his bed frame next to the others. Johnny drifted off the sleep.

The moon rose and slowly climbed the sky, bathing the snowy hills and icy roofs with silvery light. A jingling of tiny sleigh bells sounded through the crisp night wind. Johnny awoke and sprang out of bed to his window.
"Santa?"
He strained his eyes against the difficult light, scanning the frozen world until he discerned a tiny sleigh FLYING over the rooftops being pulled by tiny animals. What were they? As the sleigh flew closer, they appeared to be eight flying squirrels. A high pitched sing song crackled faintly over the wind.
"On Chimpy
On Bizmol
On Skippy and Flipper!
On Skimpy
On Zagnon
On Bippy and Whipper!"
The tiny sleigh floated among the houses and hovered over Johnny's roof. It lightly settled its rails on top of the house with a thump. A loud sound of someone clearing their throat and then spitting out the phlegm, echoed throughout the neighborhood. Tiny footsteps and scuffling buzzed into the wooden ceiling.
"Santa?" Johnny asked timidly.
Scraping sounds and groans and creaks of wood being pried and bent struck fear in his heart. Tiny voices with thumping and scuffling were then inside the wall. Johnny struck a match and lit the kerosene lantern on his desk.
In the corner of his room, he watched with horror as an iron nail holding one of the wooden planks of the wall wiggled and shook, inching out slowly, then dropped to the floor. The nail below it shook loose as well then dropped to the floor, where it rolled in a semi circle. A small iron hook thrust through the end of the plank and then the noises of wood groaning and bending. A strange, tiny man squeezed himself into the room around the plank and lowered himself on to the floor.