Reply ✍ Transcribed
From My life, my fight & the pain I endure: To the World by Craig Lathon (author's profile)
Share this:
uploaded June 19, 2011.  Original (PDF) 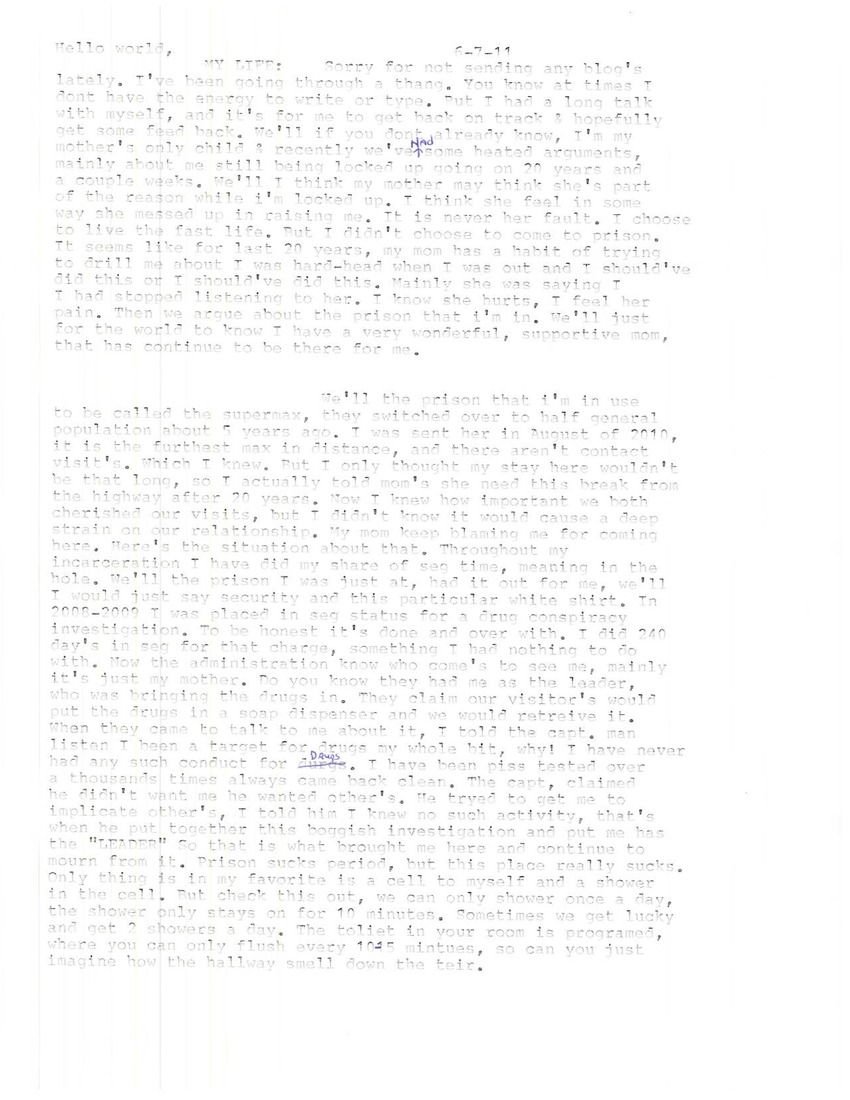 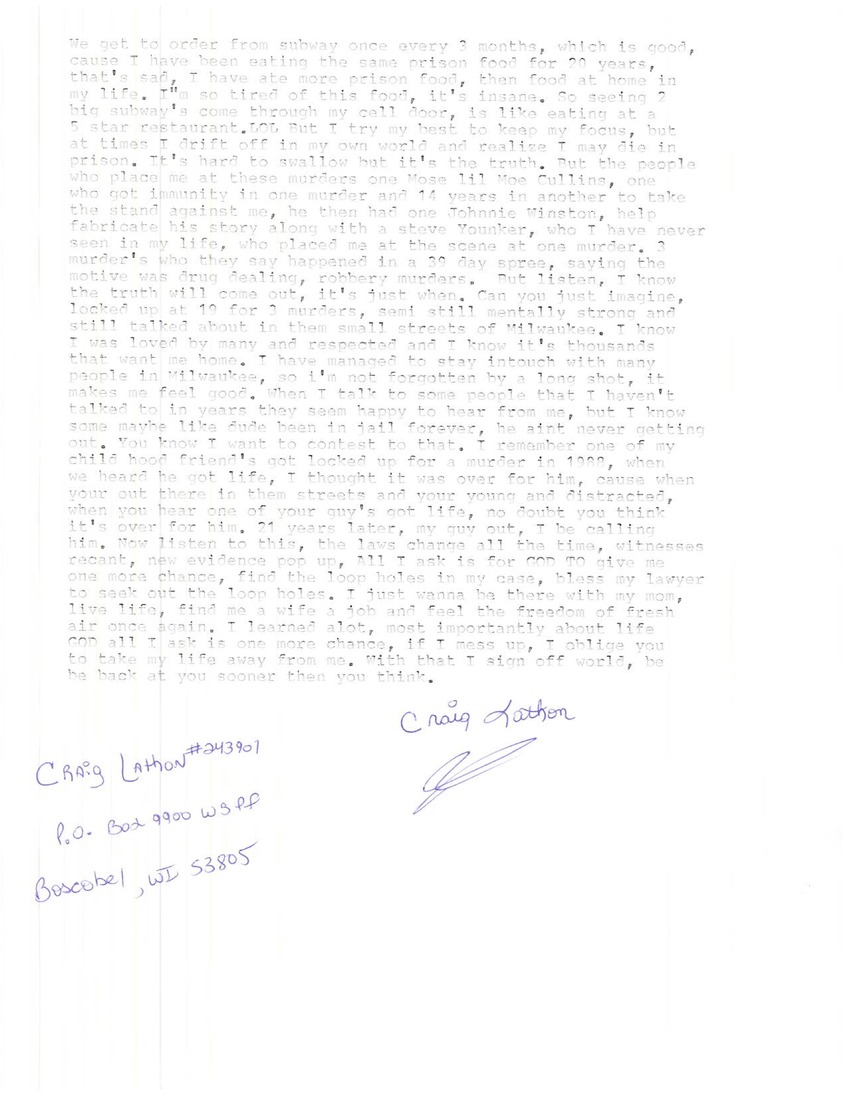 Sorry for not sending any blog posts lately. I've been going through a thang. You know, at times, I don't have the energy to write or type. But I had a long talk with myself, and it's for me to get back on track and hopefully get some feedback.

Well, if you don't already know, I'm my mother's only child and recently we've had some heated arguments, mainly about me still being locked up—going on 20 years and a couple weeks. Well, I think my mother may think she's part of the reason why I'm locked up. It is never her fault. I chose to live the fast life. But I didn't choose to come to prison. It seems like for the last 20 years, my mom has a habit of trying to drill me about how I was a hard-head when I was out, and I should've did this or should've done that. Mainly she was saying that I had stopped listening to her. I know she hurts. I feel her pain. Then we argue about the prison that I'm in. Well, just for the world to know, I have a very wonderful, supportive mom who continues to be there for me.

Well, the prison that I'm in used to be called the Supermax. They switched over to half general population about 5 years ago. I was sent here in August of 2010. It is the furthest max in distance, and there aren't contact visits. Which I knew. But I only thought my stay here wouldn't be that long so I told Mom she needed this break from the highway after 20 years. Now I knew how important we both cherished our visits, but I didn't know it would cause a deep strain on our relationship. My mom keeps blaming me for coming here.

Here's the situation about that. Throughout my incarceration, I have did my share of seg time meaning in "the hole". Well, the prison I was just at had it out for me. Well, I would just say security and this particular white shirt. In 2008-2009, I was placed in seg status for a drug conspiracy investigation. To be honest, it's done and over with. I did 240 days in seg for that charge, something I had nothing to do with.

Now the administration knew who came to see me, mainly just my mother. Do you know they had me as the leader who was bringing the drugs in? They claim our visitors would put the drugs in the soap dispenser and we would retrieve it. When they came to talk to me about it, I told the capt., "Man, listen. I have been a target for drugs my whole bit. Why?! I have never had any such conduct for drugs. I have been piss tested over a thousand times. Always came back clean." The capt. claimed he didn't want me, he wanted the others. He tried to get me to implicate others. I told him I knew no such activity, that when he put together this bogus investigation and put me as the "leader". So that has brought me here, and I continue to mourn for it.

Prison sucks period. But this place really sucks. Only thing that is my favorite is a cell to myself and a shower is in the cell. But check this out: we can only shower once a day. The shower only stays on for 10 minutes. Sometimes, we get lucky and get 2 showers a day. The toilet in your room is programmed where you can only flush every 10-15 minutes, so you can just imagine how the hallways smells down the tier.

We get to order from Subway once every 3 months, which is good 'cause I have been eating the same prison food for 20 years. That's sad. I have eaten more prison food than food at home in my life. I'm so tired of this food, it's insane. So seeing 2 big Subways come through my cell door is like eating at a 5 star restaurant. Lol.

But I try to keep my focus, but at times I drift off into my own world and realize I may die in prison. It's hard to swallow, but it's the truth.

But the people who placed me at these murders one Moses, lil' Moe Cullins, one who got immunity in one murder and 14 years in another took the stand against me. He then had one Johnnie Winston help fabricate his story along with Steve Younker, who I have never seen in my life, who placed me at the scene at one mruder. 3 murders who they say happened in a 39 day spree, saying that the motive was drug dealing, robbery, and murders. But listen, I know the truth will come out. It's just when. Can you imagine being locked up at 19 for 3 murders, semi mentally strong and still talked about in them small streets of Milwaukee?

I know I was loved by many and respected, and I know there're thousands who want me home. I have managed to stay in touch with many people in Milwaukee so I'm not forgotten by a long shot. It makes me feel good. When I talk to some people that I haven't talked to in years, they seem happy to hear from me. But I know some maybe like, "Dude been in jail forever. He ain't never getting out." You know what? I want to contest to that.

I remember one of my childhood friend got locked up for a murder in 1988. When we heard he got life, I thought it was over for him. 'Cause when you're out there in them streets and you're young and distracted, when you hear one of your guys got life, no doubt you think it's over for him. 21 years later, my guy is out. I be calling him.

Now listen to this: the law changes all the time. Witnesses recant, new evidence pops up. All I ask if for God to give me one more chance. Find the loopholes in my case, bless my lawyer to seek out the loopholes. I just wannabe there with my mom, live life, find me a wife and a job, and feel the freedom of fresh air once again. I learned a lot, most importantly about life. God, all I ask is one more chance. If I mess up, I oblige you to take my life away from me.

With that, I sign off, world. Be back at you sooner than you think.