Reply ✍ Transcribed
From My life, my fight & the pain I endure: To the World by Craig Lathon (author's profile)
Share this:
uploaded April 10, 2011.  Original (PDF) 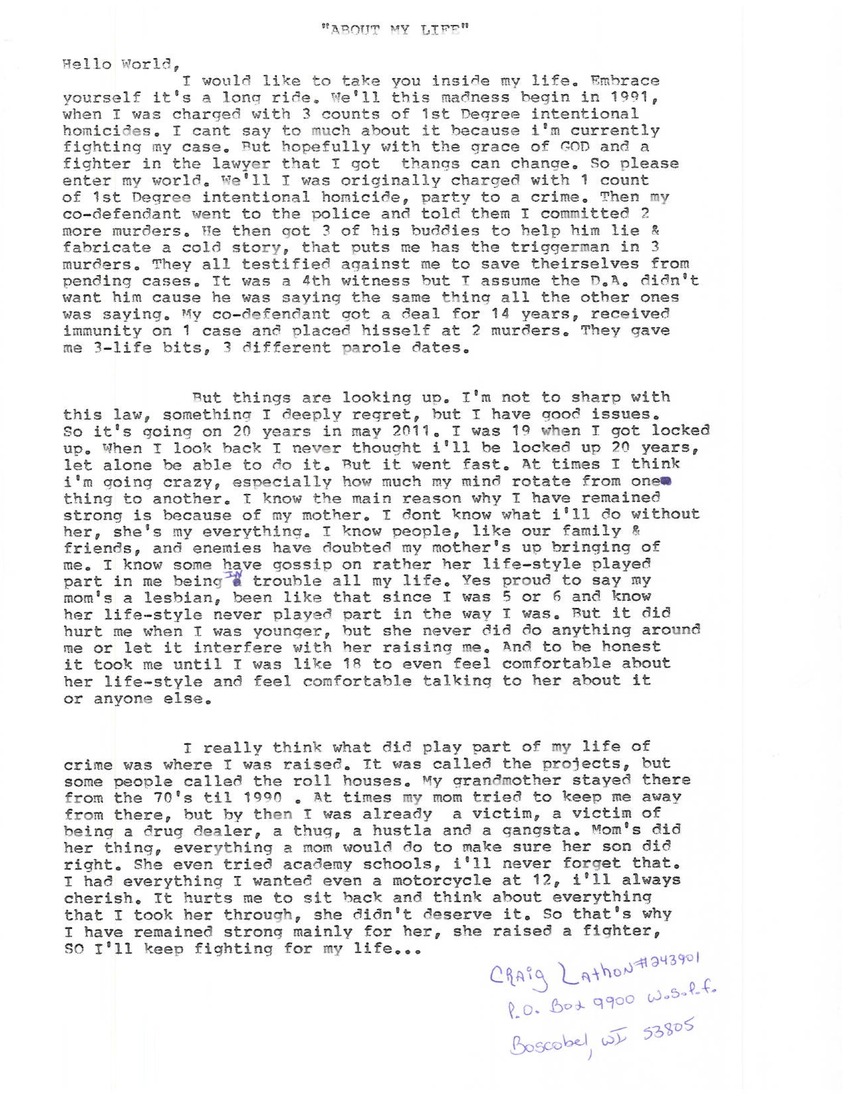 I would like to take you inside my life. Brace yourself: it's a long ride.

Well, this madness begins in 1991, when I was charged with 3 counts of 1st degree intentional homicide. I can't say too much about it because I'm currently fighting my case. But hopefully, with the grace of God and a fighter in the lawyer that I got, things can change. So please, enter my world.

Well, I was originally charged with 1 count of 1st degree intentional homicide, party to a crime. Then my co-defendant went to the police and told them I committed 2 more murders. He then got 3 of his buddies to help him lie and fabricate a cold story that puts me as the triggerman in 3 murders. They all testified against me to save themselves from pending cases. There was a 4th witness, but I assume the DA didn't want him 'cause he was saying the same thing all the others were saying. My co-defendant got a deal for 14 years, received immunity on 1 case, and placed himself at 2 murders. They gave me 3-life bits, 3 different parole dates.

But things are looking up. I'm not too sharp with this law—something I deeply regret—but I have good issues. So it's going on 20 years in May 2011. I was 19 when I got locked up. When I look back, I never thought I'd be locked up 20 years, let alone be able to do it. But it went fast. At times, I think I'm going crazy, especially how much my mind rotates from one thing to another.

I know the main reason why I have remained strong is because of my mother. I don't know what I'd have done without her; she's my everything. I know people, like our family and friends, and enemies have doubted my mother's upbringing of me. I know some have gossip on rather her lifestyle played a part in me being a trouble all my life. Yes, proud to say my mom's a lesbian. Been like that since I was 5 or 6, and, no, her lifestyle never played a part in the way I was. But it did hurt me when I was younger. But she never did anything around me or let it interfere with her raising me. And to be honest, it took me until I was like 18 to even feel comfortable about her lifestyle and feel comfortable talking to her about it or anybody else.

I really think what did play a part of my life of crime was where I was raised. It was called the projects, but some people called them the roll houses. My grandmother stayed there from the '70s till 1990. At times, my mom tried to keep me away from there, but by then, I was already a victim: a victim of being a drug dealer, a thug, a hustla, and a gangsta.

Mom did her thing, everything a mom would do to make sure her son did right. She even tried academy schools; I'll never forget that. I had everything I wanted, even a motorcycle, at 12. I'll always cherish it. It hurts me to sit back and think about everything that I took her through; she didn't deserve it. So that's why I remained strong mainly for her; she raised a fighter so I'll keep fighting for my life.

Honestly, I think I would've killed myself if it wasn't for my mother. So since my incarceration, I haven't accomplished that much but becoming a man and being more mature. But besides an education, what more can a person accomplish? Being locked up limits a person. But I tell you this: I know I'll never be back in prison once I'm free. That's the one thing I did accomplish: ways to better myself and live the right life. Criminal thinking is in my past.

I love myself too much, and I love my mother more than I love myself. So I'll be damned if I take her through an ordeal like this again. You know what: my mother said to me about 4 or 5 years ago. She said, "Craig, when you come from under this, you ever come back, I'll come to visit you and kill you myself." And I know she meant it 'cause it reminded me when I was little and she said I'm about to get my ass whooped for something I did wrong. I knew that stare, she meant business! That's just a great mom showing she cares. But I learned my less as far as coming back.

I have picked up a little knowledge since I've been down, mainly about life. But most of my bit my mind has been distracted. I keep my mind on the streets way too much, wondering what's going on out there. Mainly about my mother, family members, women, and old friends. I have spent a lot of my bit trying to find the right woman to help me through this lonely pain and help stop my worries. I have had a lot of females in my life, but I still haven't found that soulmate, that woman who believes in me, that woman who loves me for who I am, not for sympathy because I have 3 life sentences and she feels sorry for me. I know it may seem a little harsh, but it's real.

It's sad that I was locked up at such a young age. I never knew what love was. It took me 20 something years to find out. Oh, and I must tell the truth: love hurts at times. Being locked up really is harder than a couple in the free world. But you know what I regret the most about dealing with women in my past? Not being honest about my sentence. But hear me out for a second.

Let's face reality. What woman is going to be by your side when you tell them you have 3 life bits? I mean, I know it's some that would be there, but that's very rare. First, when you tell them that, they're going to think you're some crazy dude with no respect for human life. A lot of people already think you're guilty. Then they have in the back of their mind, "Oh, he's never getting out of jail." But I have learned from that and I'll never lie to a female again.

Being lonely hurts more than anything. A lot of things run through my mind. At times, it's hard staying focused because I have so much to think about. At times, I feel I'm going crazy.

I talk to the clinical doctors at time. I didn't come into contact with them until 2004. That's because I went on a hunger strike. I talk to them, hoping they can help me deal with what I'm going through. My mom says she understands, but I think she only understands because she feels locked up. Because her only child is locked away. But I'm getting a little depressed.

It's a pleasure to hear some of your feedback. Thank you for reading my blog. I'll sign of. I hope your response could help me keep my sanity and from being so lonely and, at times, depressed.

IT TOOK A LOT OF HEART TO WRITE THAT AND I COMMEND YOU ON THAT. YOU MAY NOT REMEMBER ME BUT MY NAME IS EVA AND I'VE KNOWN YOU SINCE YOU WERE 5YRS.OLD YOU WERE THE CUTEST LITTLE BOY AND WHEN I HEARD YOU WERE ON LOCK-DOWN I COULDN'T BELIEVE IT. I READ YOUR STORY AND I BELIEVE YOU. PEOPLE WILL DO ANYTHING TO SAVE THEY OWN SKIN IF THAT MEAN LYING ON THE NEXT MAN. I'M HERE TO SAY TO YOU TO KEEP YO HEAD UP AND STAY IN PRAYER. FOR THE RECORD YOU WILL ALWAYS BE THAT CUTE LITTLE CRAIG TO ME:)