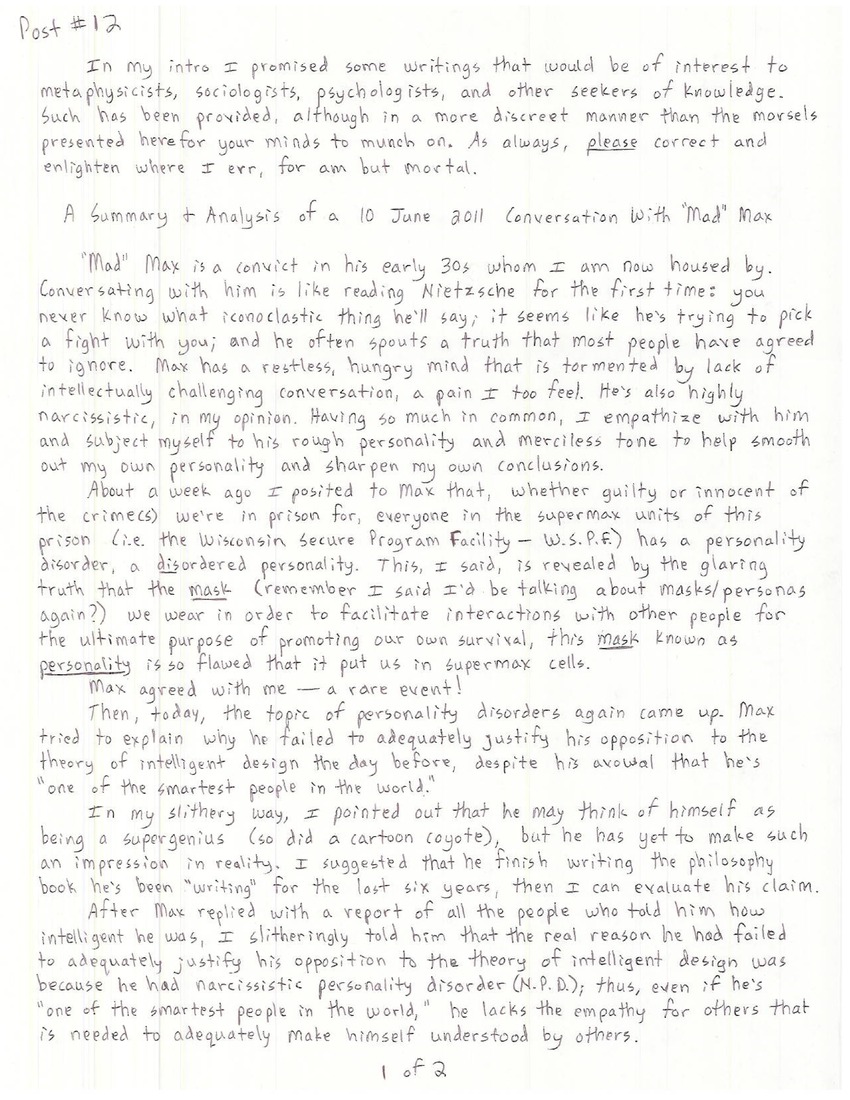 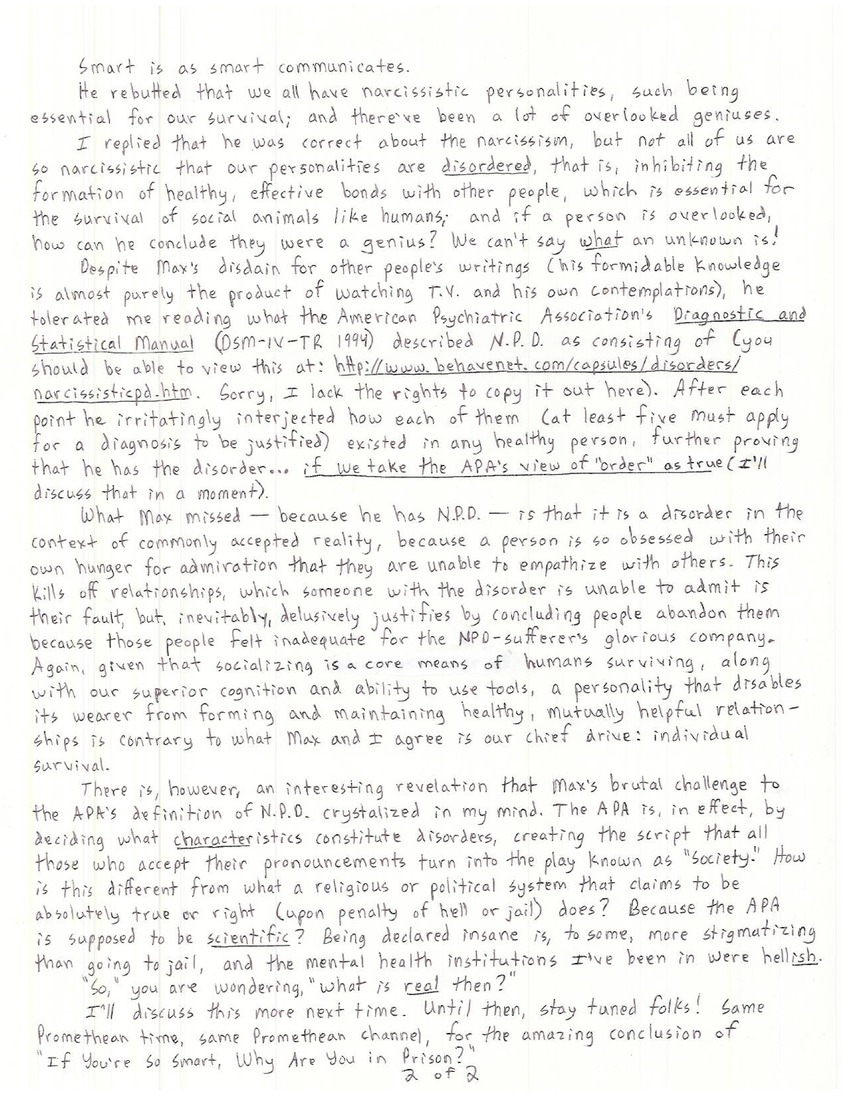 In my intro, I promised some writings that would be of interest tometaphysicists, sociologists, psychologists, and other seekers of knowledge.
Such has been provided, although in a more discreet manner than the morsels presented here for your minds to munch on. As always, please correct and enlighten where I err, for am but mortal

"Mad" Max is a convict in his early 30s whom I am now housed by.
Conversating with him is like reading Nietzche for the first time: you never know what iconoclastic thing he'll say; it seems like he's trying to pick a fight with you; and he often spouts a truth that most people have agreed to ignore. Max has a restless, hungry mind that is tormented by lack of intellectually challenging conversation, a pain I too feel. He's also highly narcissistic, in my opinion. Having so much in common, I empathize with him and subject myself to his rough personality and merciless tone to help smooth out my own personality and sharpen my own conclusions.
About a week ago, I poisted to Max that, wether guilty or innocent of the crime(s) we're in prioson for, everyone in the supermax units of this prison (i.e. the Wisconsin Secure Program Facility - W.S.P.F.) has a personality disorder, a disordered personality. This, I said is revealed by the glaring trught that the mask (remember I said I'd be talking about masks/personas again?) we wear in order to facilitate interactions with other people for the ultimate purpose of promoting our own survival, this mask known as personality is so flawed that it put us in supermax cells.
Max agreed with me - a rare event!
Then, today, the topic of personality disorders again came up. Max tried to explain why he failed to adequateley justify his opposition to the theory of intelligent design the day before, despite his avowal that he's "one of the smartest people in the world"
In my lithery way, I pointed out that he may think of himself as being a supergenius (so did a cartoon coyote), but he has yet to make such an impression in reality. I suggested that he finish writing the philosophy book he's been "writing" for the last six years, then I can evaluate his claim.
After Max replied with a report of all the people who told him how intelligent he was, I slitheringly told him that the real reason he had failed to adequately justify his opposition to the theory of intelligent design was because he had a narcissistic personality disorder (N.P.D.); thus, even if he's "One of the smartest people in the world", he lacks the empathy for others that is needed to adequately make himself understood by others.
1 of 2

Smart is as smart communicates.
He rebutted that we all have narcissistic personalities, such being essential fro our survival; ant there've been a lot of overlooked geniuses.
I replied that he was correct about the narcissism, but not all of us are so narcissistic that our personalities are disordered, that is, inhibiting the formation of healthy, effective bonds with other people, which is essential for the survival of social animalslike humans; and if a person is overlooked, how can he conclude they were a genius? We can't say what an unknown is!
Despite Max's disdain for other people's writings (his formidable knowledge isalmost purely the product of watching TV and his own contemplations), he tolerated me reading what the American Psychiatric Association's Diagnostic and Statistical Manual (DSM-IV-TR 1994) described N.P.D. as consisting of(you should be able to view this at: http://www.behavenet.com/capsules/disorders/narcissisticpd.htm. Sorry, I lack the rights to copy it out here). After each point, he irriraringly interjected how each of them (at least fivemust apply for a diagnosis to be justified) existed in any healthy person, further proving that he has the disorder... if we take the APA's view of "order" as true (I'll discuss that in a moment).

What Max missed -becasue he has N.P.D. - is that it is a disorder in the context of commonly accepted reality, because a person is so obsessed with their own hunger for admiration that they are unable to empathize with others. This kills off relationships, which someone with the disorder is unable to admitis their fault, but, inevitably, delusively justifies by concluding people abandon them because those people felt inadequate for the NPD -sufferer's glorious company.
Again, given that socializing is a core means of humans surviving, along with our superior cognition and ability to use tools, a personality that disablesits wearer from forming an maintaining healthy, mutually helpful relationships is contrary to what Max and I agree, is our chief drive: individual survival.
There is, however, an interesting revelation that Max's brutal challenge to the APA's definition of N.P.D. crystalized in my mind. The APA is, in effect, by deciding what characteristics constitute disorders, creating the script that all those who accept their pronouncements turn into the play known as "society". How is this different from what a religious or political system that claims to be absolutely trueor right (upon penalty of hell or jail) does? Vecause the APA is supposed to be scientific? Being declared insane is, to some, more stigmatizingthan going to jail,and thementalhealth institutions I've been in werehellish.
"So", you are wondering "what is real then?"
I'll discuss this more next time. Until then, stay tuned folks! Same Promethean time,same Promethean channel, for the amazing conslusion of "If you're so smart, Why are you in prison?"

Thank you. I appreciate this post very much.
Thanks for writing! I finished the transcription for your post.

I specially enjoyed this one, can't wait to read the conclusion :)