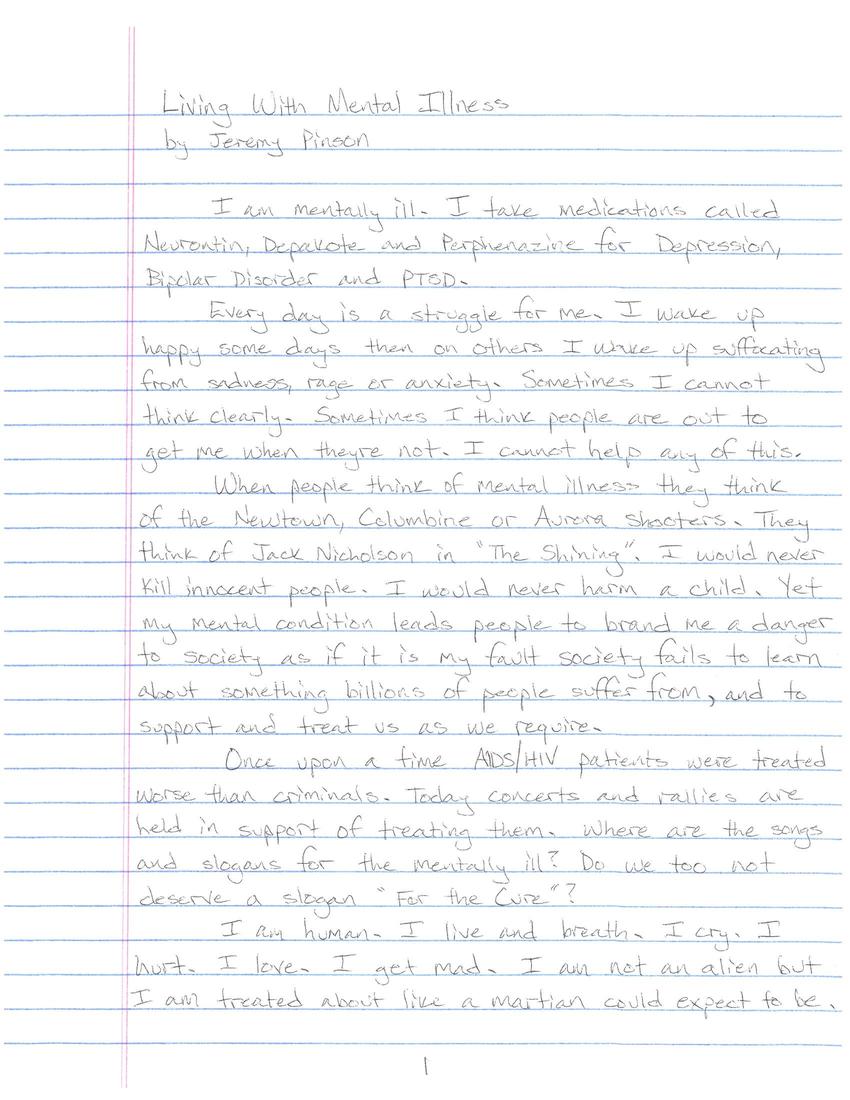 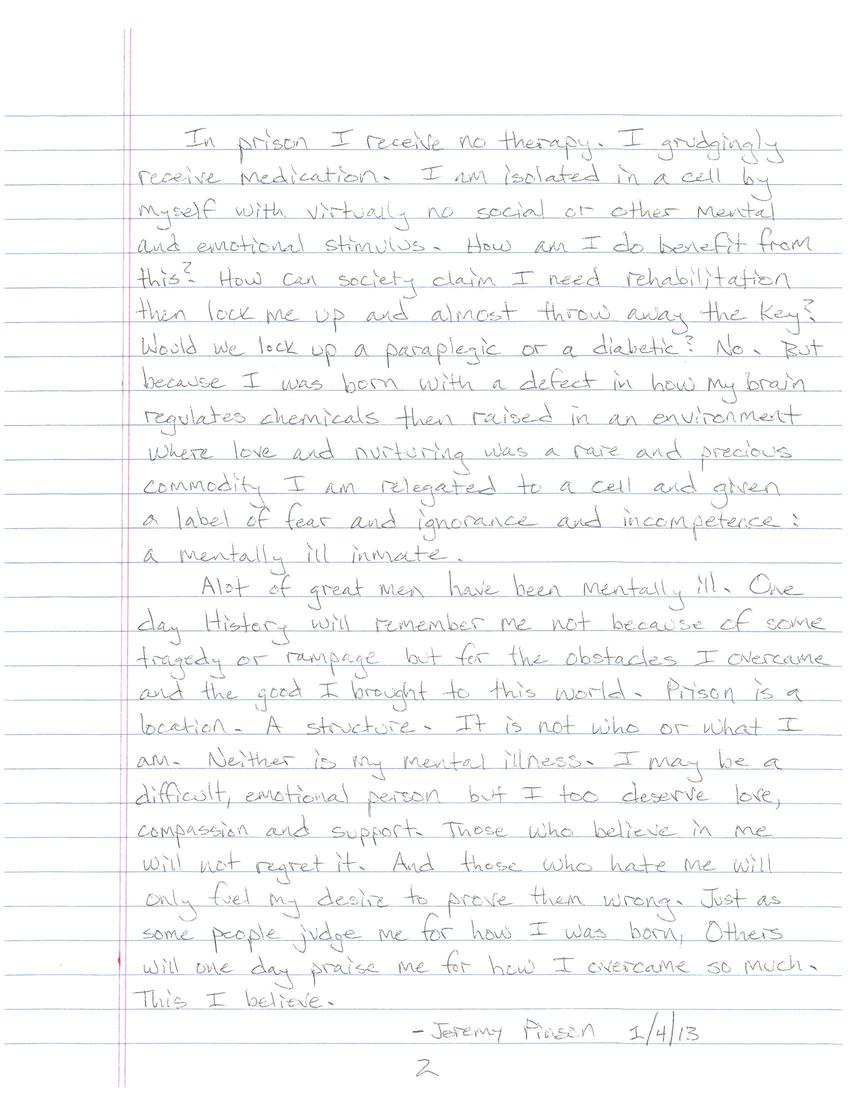 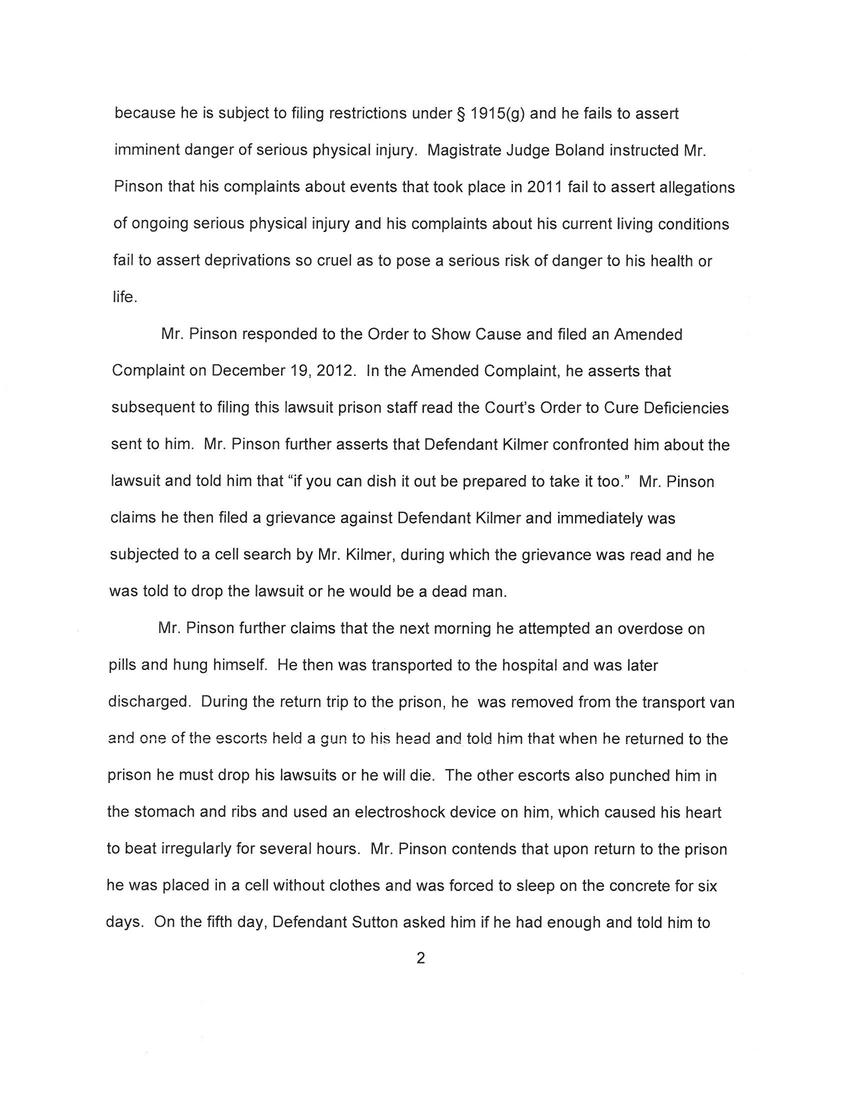 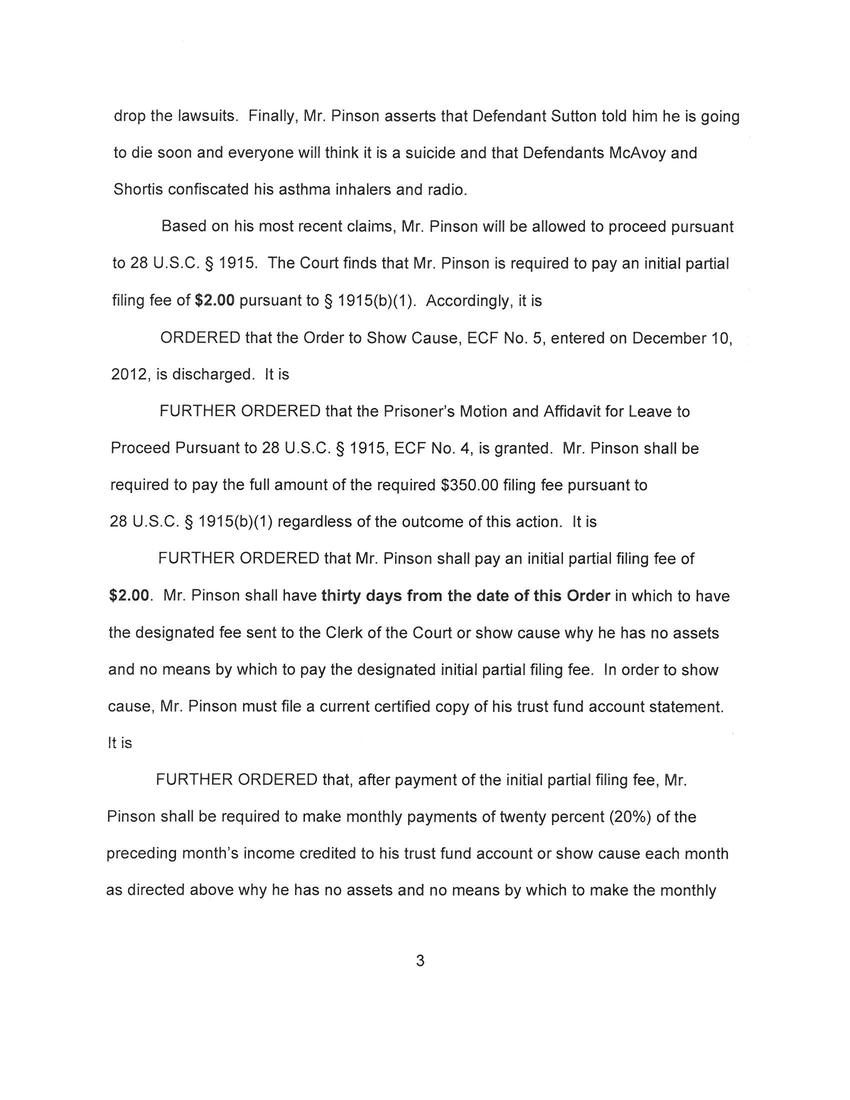 I am mentally ill. I take medications called Neurontin, Depakote and Perphenazine for depression, bipolar disorder and PTSD.

Every day is a struggle for me. I wake up happy some days then on others I wake up suffocating from sadness, rage or anxiety. Sometimes I cannot think clearly. Sometimes I think people are out to get me when they're not. I cannot help any of this.

When people think of mental illness they think of the Newtown, Columbine or Aurora shooters. They think of Jack Nicholson in "The Shining". I would never kill innocent people. I would never harm a child. Yet my mental condition leads people to brand me a danger to society as if it is my fault society fails to learn about something billions of people suffer from, and to support and treat us as we require.

Once upon a time AIDS/HIV patients were treated worse than criminals. Today concerts and rallies are held in support of treating them. Where are the songs and slogans for the mentally ill? Do we too not deserve a slogan "For the Cure"?

I am human. I live and breathe. I cry. I hurt. I love. I get mad. I am not an alien but I am treated about like a Martian could expect to be.

In prison I receive no therapy. I grudgingly receive medication. I am isolated in a cell by myself with virtually no social or other mental and emotional stimulus. How am I to benefit from this? How can society claim I need rehabilitation then lock me up and almost throw away the key? Would we lock up a paraplegic or a diabetic? No. But because I was born with a defect in how my brain regulates chemicals then raised in an environment where love and nurturing was a rare and precious commodity, I am relegated to a cell and given a label of fear and ignorance and incompetence: a mentally ill inmate.

A lot of great men have been mentally ill. One day history will remember me not because of some tragedy or rampage but because for the obstacles I overcame and the good I brought to this world. Prison is a location. A structure. It is not who or what I am. Neither is my mental illness. I may be a difficult, emotional person but I too deserve love, compassion and support. Those who believe in me will not regret it. And those who hate me will only fuel my desire to prove them wrong. Just as some people judge me for how I was born, others will one day praise me for how I overcame so much. This I believe.

because he is subject to filing restrictions under 1915(g) and he fails to assert imminent danger of serious physical injury. Magistrate Judge Boland instructed Mr. Pinson that his complaints about events that took place in 2011 fail to assert allegations of ongoing serious physical injury and his complaints about his current living conditions fail to assert deprivations so cruel as to pose a serious risk of danger to his health or life.

Mr. Pinson responded to the Order to Show Cause and filed an Amended Complaint on December 19, 2012. In the Amended Complaint, he asserts that subsequent to filing this lawsuit prison staff read the Court's Order to Cure Deficiencies sent to him. Mr. Pinson further asserts that Defendant Kilmer confronted him about the lawsuit and told him that "if you can dish it out be prepared to take it too." Mr. Pinson claims he then filed a grievance against Defendant Kilmer and immediately was subjected to a cell search by Mr. Kilmer, during which the grievance was read and he was told to drop the lawsuit or he would be a dead man.

Mr. Pinson further claims that the next morning he attempted an overdose on pills and hung himself. He then was transported to the hospital and was later discharged. During the return trip to the prison, he was removed from the transport van and one of the escorts held a gun to his head and told him that when he returned to the prison he must drop his lawsuits or he will die. The other escorts also punched him in the stomach and ribs and used an electroshock device on him, which caused his heart to beat irregularly for several hours. Mr. Pinson contends that upon return to the prison he was placed in a cell without clothes and was forced to sleep on the concrete for six days. On the fifth day, Defendant Sutton asked him if he had enough and told him to drop the lawsuits. Finally, Mr. Pinson asserts that Defendant Sutton told him he is going to die soon and everyone will think it is a suicide and that Defendants McAvoy and Shortis confiscated his asthma inhalers and radio.

I do not know what it is like to live with bipolar disorder but I have lived with severe mental illness for 12 years. I think the treatment you have suffered is truly awful and wish you the very best with your lawsuits. I hope that some day you may actually get help with your condition which will enable you to live a more meaningful life.
Stay positive! You have a lot to give. If more people speak out about mental illness, hopefully the way society views it will change over time.