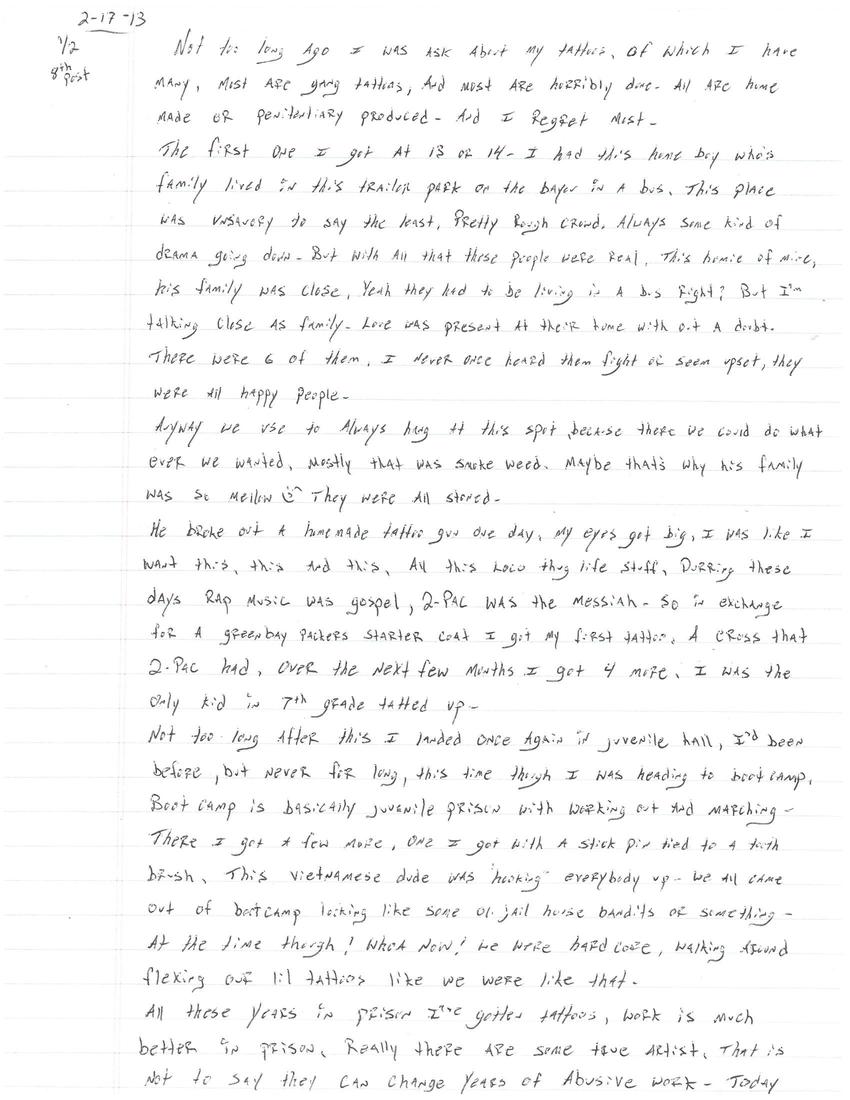 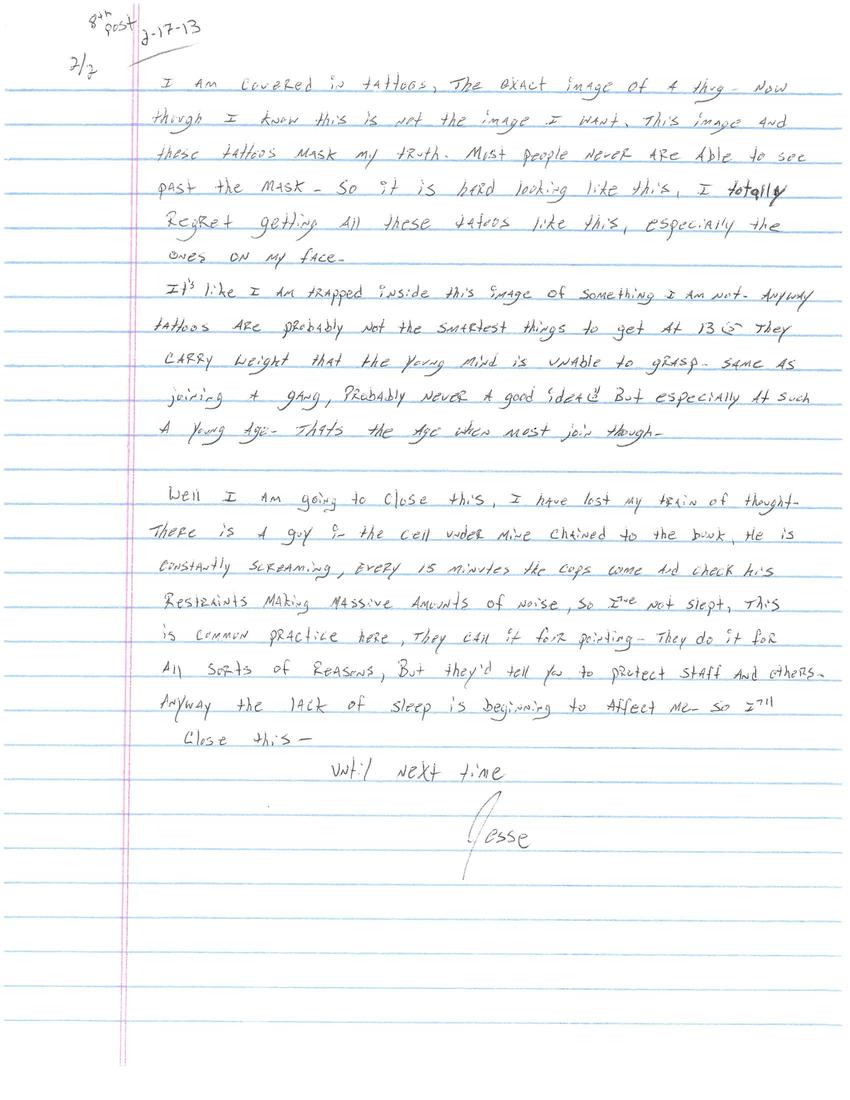 Not too long ago I was ask about my tattoos, of which I have many. Most are gang tattoos, and most are horribly done. All are home made or penitentiary produced. And I regret most.

The first one I got at 13 or 14. I had this home boy who's family lived in this trailer park on the bayou in a bus. This place was unsavory to say the least. Pretty rough crowd. Always some kind of drama going down. But with all that these people were real. This homie of mine, his family was close. Yeah they had to be living in a bus right? But I'm talking close as family. Love was present at their time without a doubt. There were 6 of them. I never once heard them fight or seem upset, they were all happy people.

Anyway we use to always hang at this spot because there we could do what ever we wanted, mostly that was smoke weed. Maybe that's why his family was so mellow - They were all stoned.

He broke out a homemade tattoo gun one day, my eyes got big, I was like I want this, this and this, All this low thug life stuff. During these days Rap music was gospel, 2-Pac was the messiah. So in exchange for a green Packers Starter coat I got my first tattoo. A cross that 2-Pac had. Over the next few months I got 4 more. I was the only kid in 7th grade tatted up.

Not too long after this I landed once again in juvenile, I'd been before, but never for long, this time though I was heading to boot camp. Boot camp is basically juvenile prison with working out and marching. There I got a few more, one I got with a stick pin tied to a tooth brush. This Vietnamese dude was "hooking" everybody up. We all came out of boot camp looking like some jail house bandits or something - At the time though! WHOA NOW! We were hard core, walking around flexing our lil' tattoos like we were like that.

All those years in prison I'e gotten tattoos, work is much better in prison. Really there are some true artists. That is not to say they can change years of abusive work - today I am covered in tattoos. The exact image of a thug. Now though I know this is not the image I want. This image and these tattoos mask my truth. Most people are never able to see past the mask, so it is hard looking like this. I totally regret getting all these tattoos like this, especially the ones on my face.

It's like I am trapped inside this image of something I am not. Anyway tattoos are probably not the smartest thing to get at 13 - they carry weight that the young mind is unable to grasp. Same as joining a gang, probably never a good idea :) But especially at such a young age. That's the age when most join though.

Well I am going to close this. I have lost my train of thought. There is a guy in the cell under mine chained to the bunk. He is constantly screaming, every 15 minutes the cops come and check his restraints making massive amounts of noise, so I've not slept. This is common practise here, they call it fort pointing - they do it for all sorts of reasons, but they'd tell you it's to protect staff and others. Anyway the lack of sleep is beginning to affect me - so I'll close this.

With or without the tattoos u are an amazing man, friend and family..... I knew u before the tattoos and even though u were troubled you always had my back and looked out for me....

I just worked some on the transcription for your February 17th (your eighth) post. I'll pick back up on it soon.

Lisa
Thanks for the reminder not to judge others by appearances. We all do it, but it can be completely deceiving at times.
(scanned reply – view as blog post)
uploaded March 23, 2013.  Original (PDF) 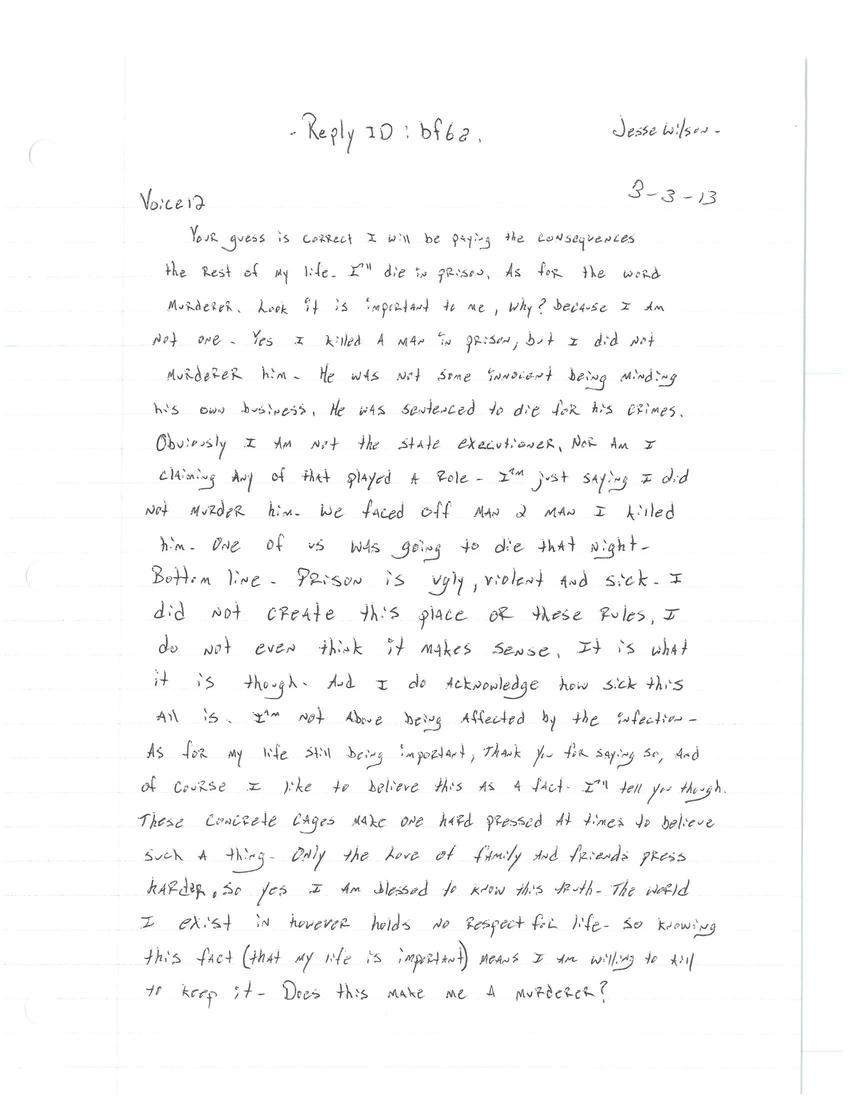 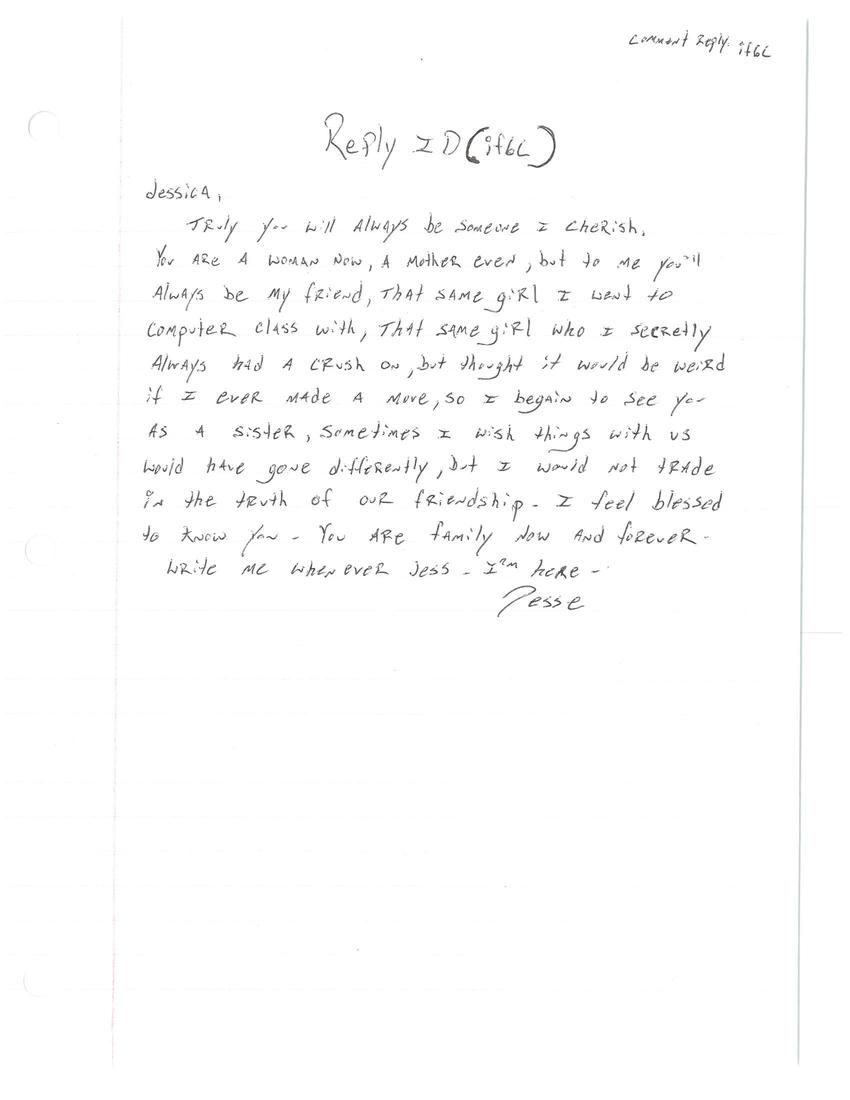 I'm so sorry I haven't written to in a while.. Things have been crazy here... I have to say I miss those days back in computer class because life was so much more worry free... well here are a few more things that have happened since I've wrote..... I am now engaged to an amazing man who has 3 lil boys, he is also a tattoo artist so I am now addicted lol, I have 8 now and getting more... You're always in my prayers and thoughts Jesse...