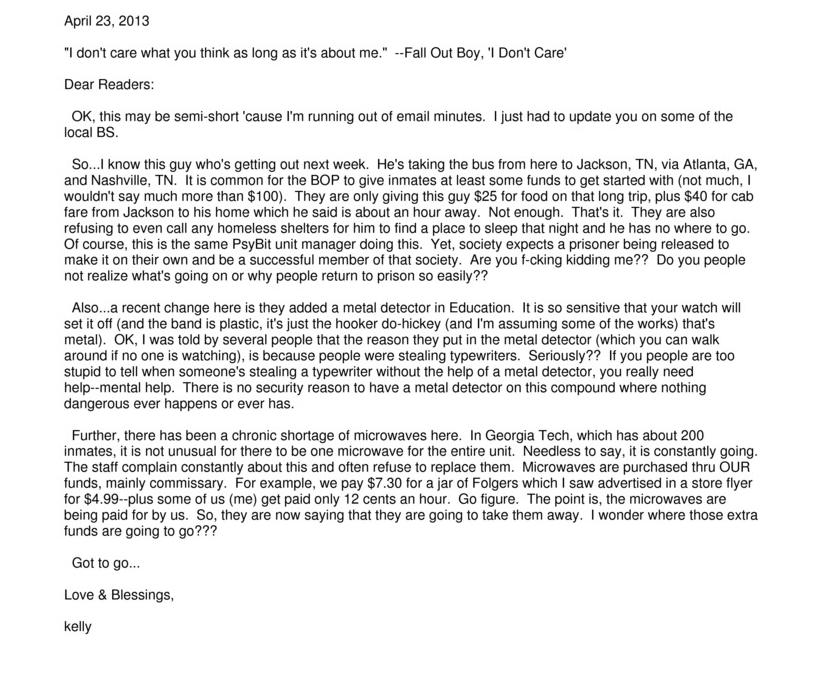 Ok, this may be semi-short 'cause I'm running out of email minutes. I just had to update you on some of the
local BS.

So...I know this guy who's getting out next week. He's taking the bus from here to Jackson, TN via Atlanta, GA,
and Nashville, TN. It is common for the BOP to give inmates at least some funds to get started with (not much, I
wouldn't say much more that $100). They are only giving this guy $25 for food on that long trip, plus $40 for cab
fare from Jackson to his home which he said is about an hour away. Not enough. That's it. They are also
refusing to even call any homeless shelters for him to find a place to sleep that night and he has no where to go.
Of course, this is the same PsyBit unit manager doing this. Yet, society expects a prisoner being released to
make it on their own and be successful member of that society. Are you f-cking kidding me?? Do you people
not realize what's going on or why people return to prison so easily??

Also...a recent change here is they added a metal detector in Education. It is so sensitive that your watch will
set it off (and the hand is plastic, it's just the hooker do-hickey (and I'm assuming some of the works) that's
metal). OK, I was told by several people that the reason they put in the metal detector (which you can walk
around if no one is watching), is because people were stealing typewriters. Seriously?? If you people are too
stuid to tell when someone's stealing a typewriter without the help of a metal detector, you really need
help--mental help. There is no security reason to have a metal detector on this compound where nothing
dangerous ever happens or ever has.

Further, there has been a chronic shortage of microwaves here. In Geogia Tech, which has about 200
inmates, it is not unusal for there to be one microwave for the enitre unit. Needless to say, it is constanly going.
the staff complain constantly about this and ofen refuse to replace them. Microwaves are purchased thru OUR
funds, mainly commissary. For example, we pay $7.30 for a jar of Folgers which I saw advertised in a store flyer
for $4.99--plus some of us (me) get paid only 12 cents an hour. God figure. The point is, the microwaves are
being paid for by us. So, they are now saying that they are going to take them away. I wonder where those extra
funds are going to go???

Nice to read you again. I too had a bad day today, well these pass like the others I suppose...

You say your were told that it's because of typewriters disappearing that they placed the metal detectors. Sounds quite absurd to me too, but maybe it's only a rumour and are there other things disappearing... Well just a suggestion from my point of view...

I know in the US it's very difficult to start again when you just come out of prison, certainly when you don't have any friends or relatives. Here in Belgium there are services working for released inmates, to help them integrate in the society again.

How are you doing these days, excepted for being indignated by some situations at the prison where you're staying?

Sorry if my English is not perfect, it's only my third language...

I send you a big hug,

little_pilgrim
Thanks for writing! I finished the transcription for your post.
Hello Kelly,

I guess you're getting the emails today?
So, a final writing here for this week.

Eventually they will realise, people complaining about the quantity of microwaves, that they will have to place some more. Instead of taking them away! Good heavens!:-o

Talking about the prices raising in prisons! George my penpal is fighting this as we speak.
He gets some small succeses as an activist. He tries to contact with his blog other activistst do do that!He thinks it's a good way to reach for similar people.I can give his blog number if you wish,ok So tell me next time.

Metal detectors... for desappearing typewriters, odd to say. Well, some other objects probably desappear as well?

Kelly, i look out to your next writing and take care, eh!
I might write you a letter. Just need gtime in my active life. ;-)
A very dear friend recently died...
(scanned reply – view as blog post)
uploaded July 7, 2013.  Original (PDF) 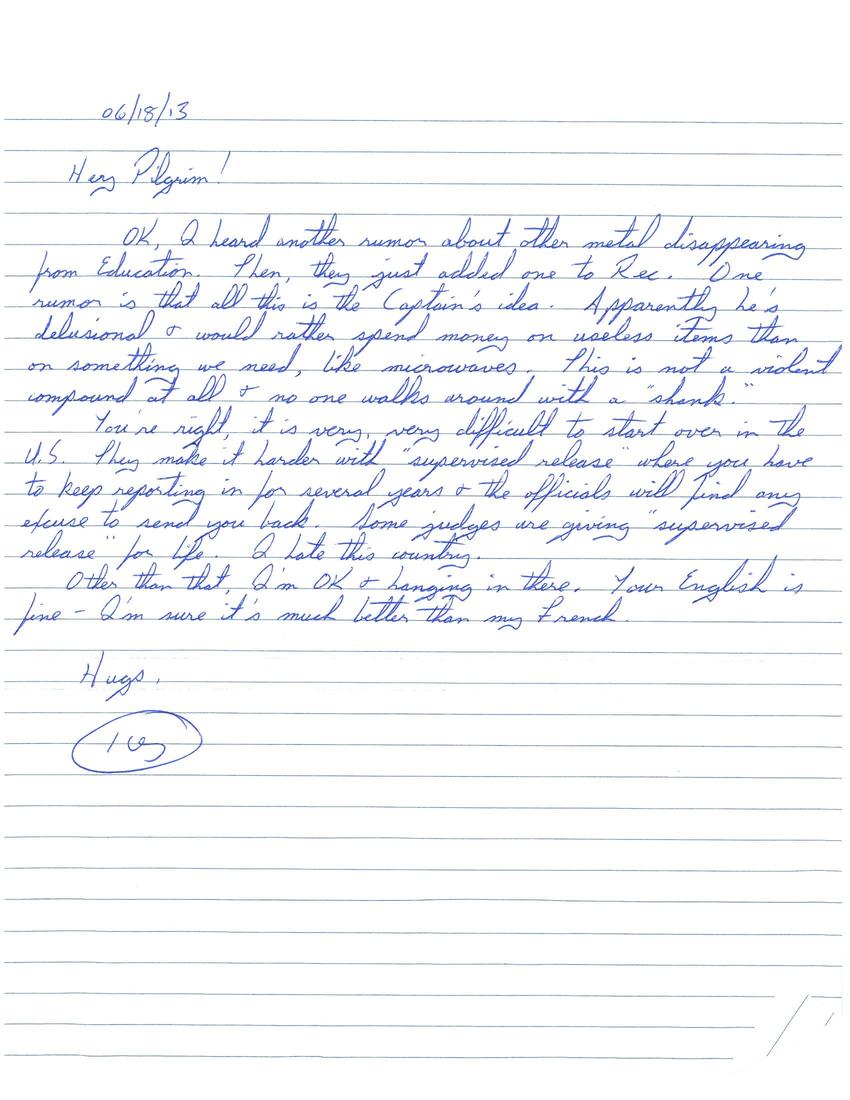 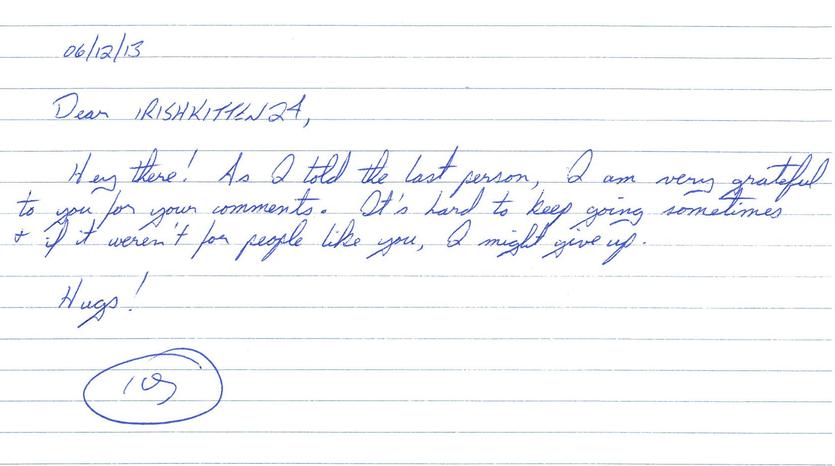 so many people stand behind you.. always remember it!

a return hug ; I arrived home from Illinois, visiting my friend George, another activist. :-) 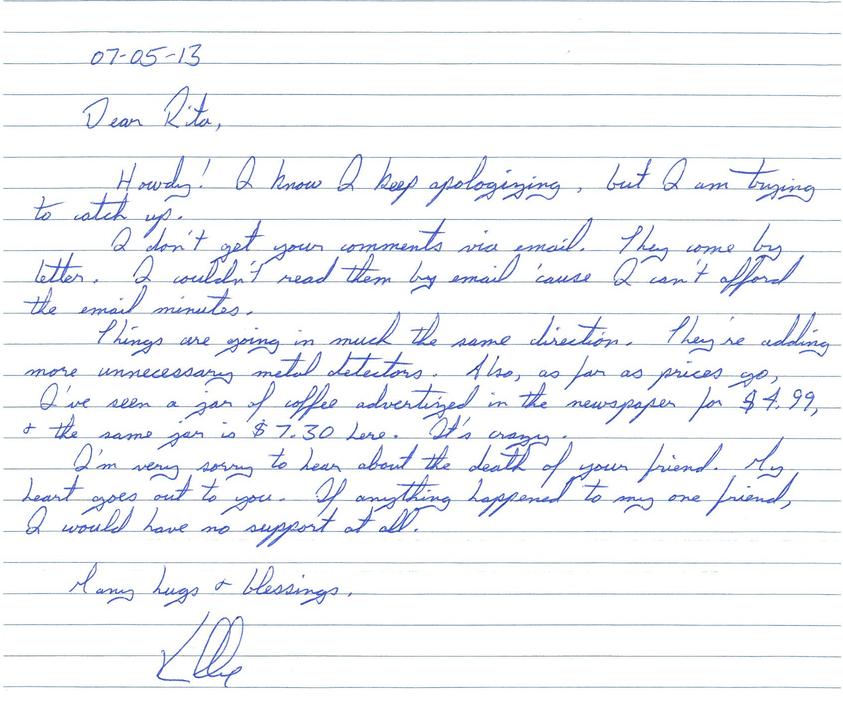 i'm writing you finally a letter these days.
I met yesteray a great painter, an Argentinian- you know that I lived in argentina, eh-.
Well, actually she is of Columnbian parents.

We saw the wonderful film 'The Way we were' With Robert Redford and Barbara Sreisand. I didn't know she just was such a very good actrice!! :-o

Anyway, the two of us are painters. We both paint very colorful!

She is more advanced as a painter than me too. But she kept always on the go... while I stopped painting for a few years. But I know I have it in me. ;-))

Kelly, you are a good person and may you too be blessed! I'll send some pictures from two art exhibitions I had in Argentina, ok?

When you will read this, I am on a little journey in the Ardennes. (woods)
There i'll send you a letter.
I'm making a small suitcase.

Do you find the time to draw or do some other art, Kelly? Wondered. or are you more in the reading right now?

You wrote in your profile you love yoga, and I am curieus if you practice it? :-)
I do!

Can I send in the future nice landscapes? Nature or else? With what can I do you a pleasure, Kelly? Tell me, ok?

i hope all is relatively well for you? Did you get my letter?
Well i'll see if get an answer, eh.

I'm just coming home from a little journey to the Ardennes; forests and the stream the Meuse.(french)
The air there is purer then where I live!!
As always on a trip, I meet new people!

Even a couple living in my area! We'll stay in touch.
Then a lady, some yrs older then me, and we got to talk in the train. She lives on her own with a dog in Brussels, our capital, and
she loves culture!!
That's what I do as well. So we might meet and go for some interesting event in a museum or else?

It was really very surprising how we got along so very well, and just met!

Do you have a preference for some writers, musical groups or even special people in your mind, Kelly???

This one I just got today. It's meant for you.

'Every once in a while it doesn't hurt to wish for a fairy godmother, a little magic, and a happy ending.'
Even the thought only, and just to enjoy it for a couple of minutes! :-))) 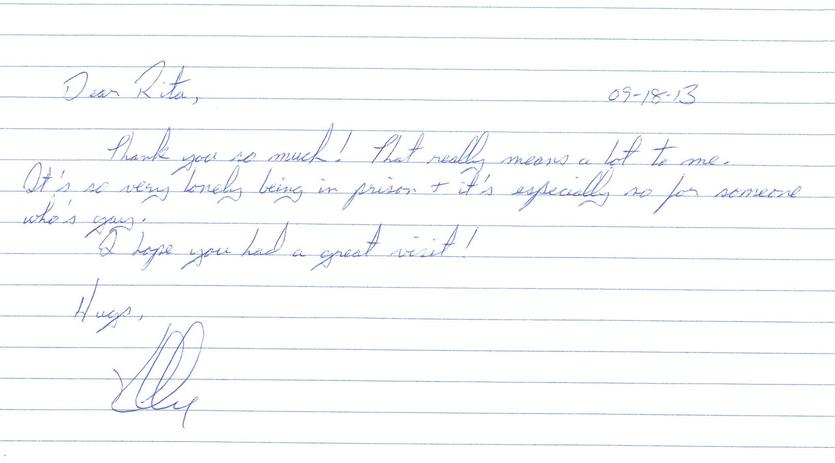 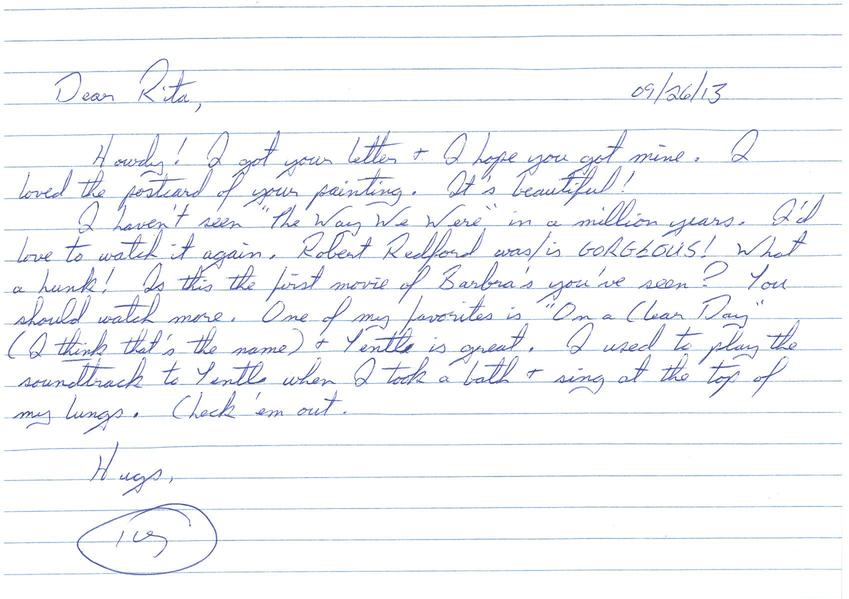 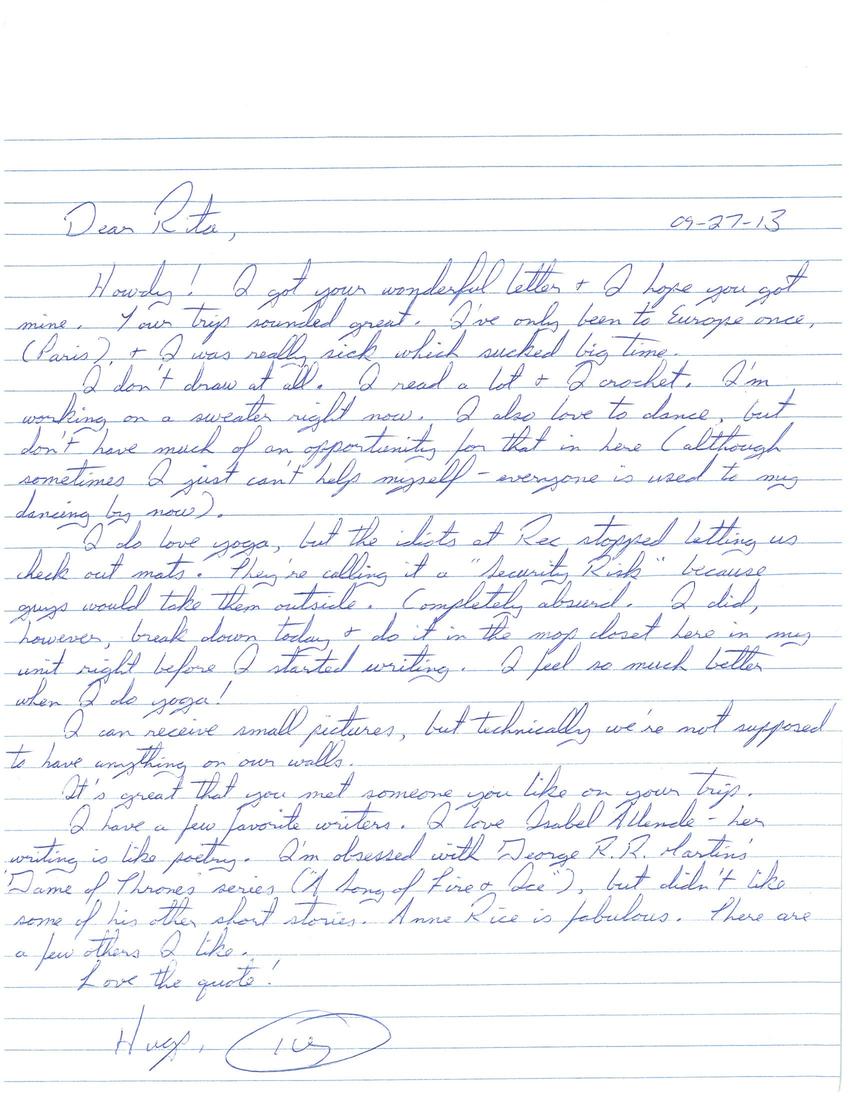