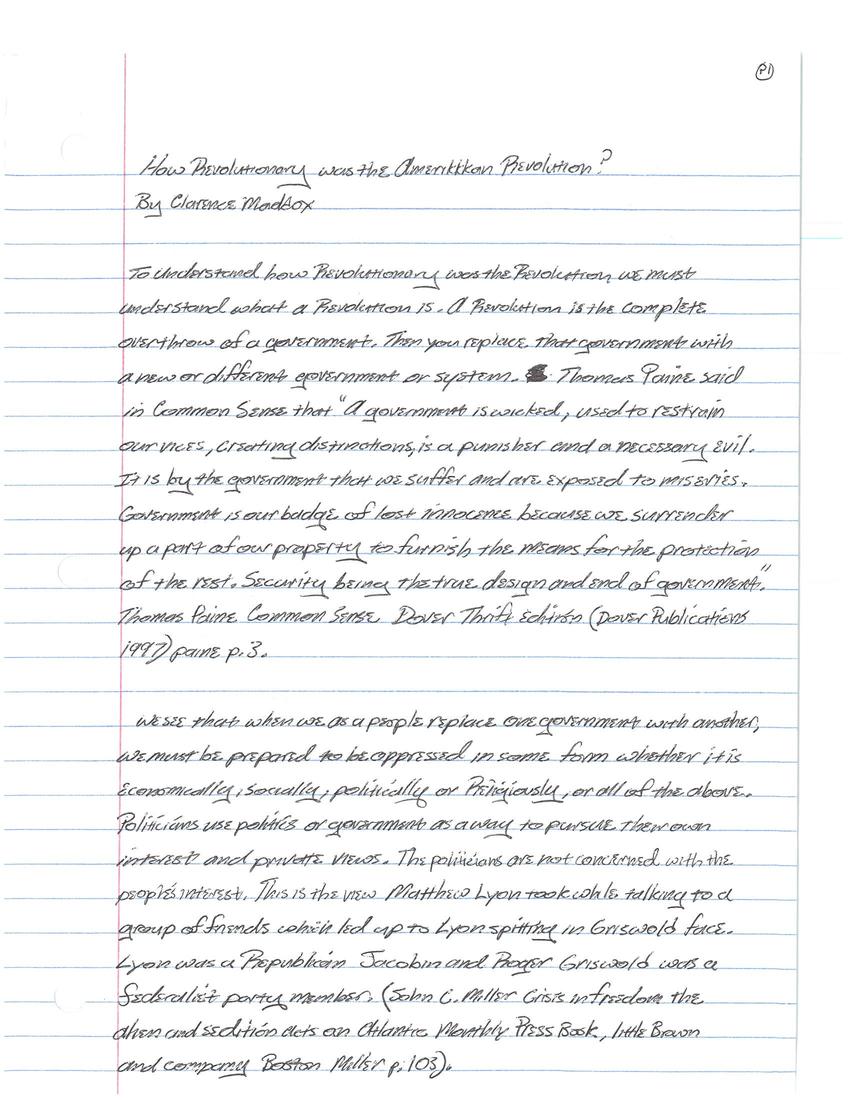 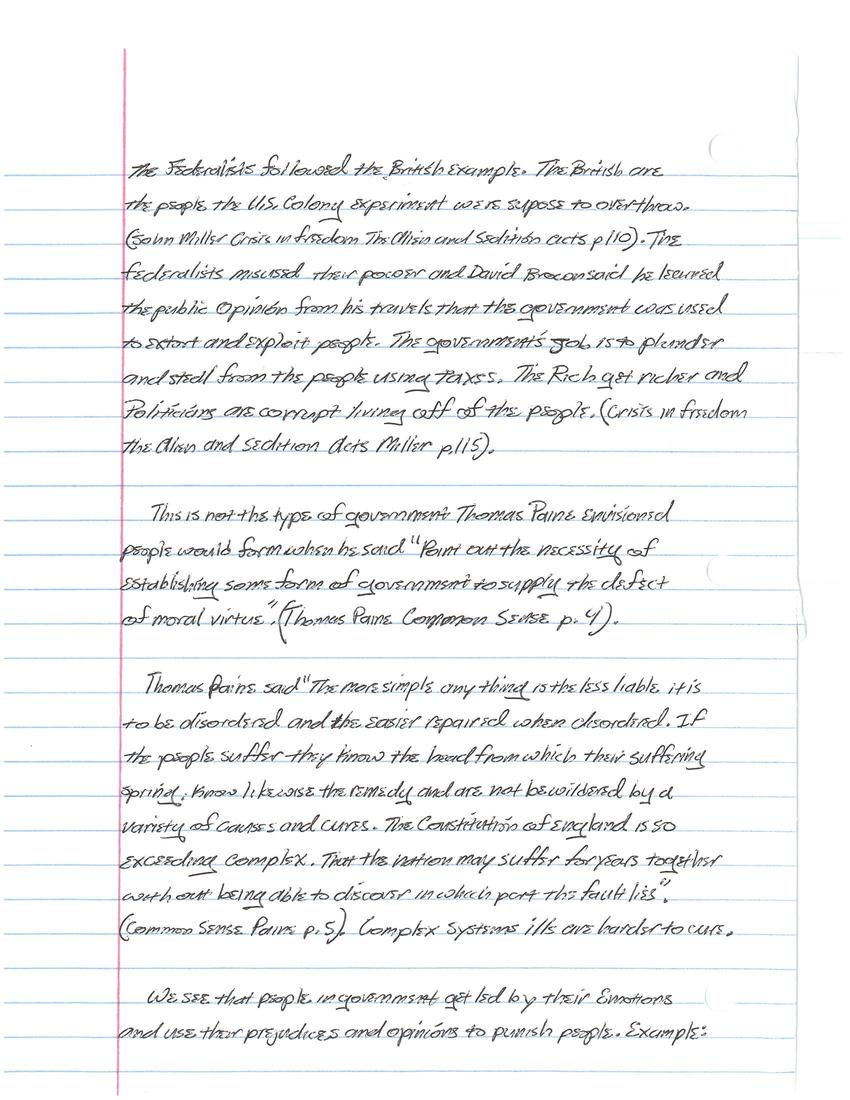 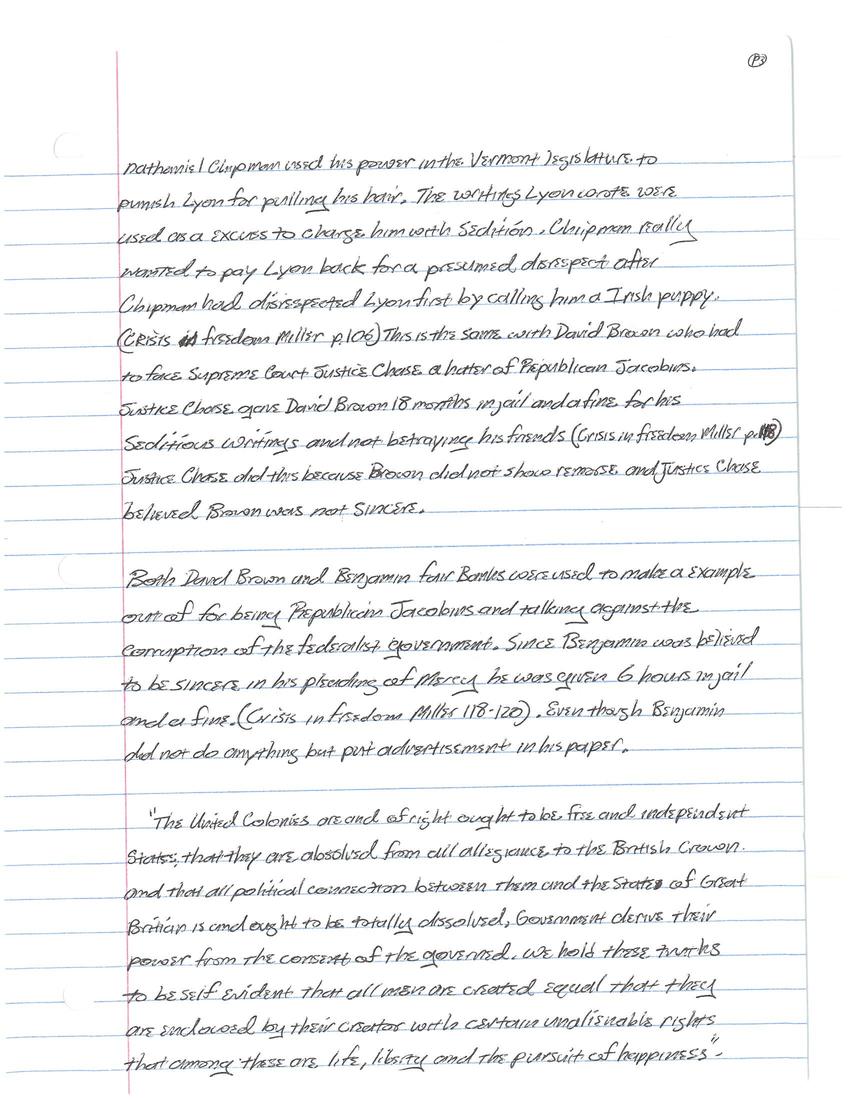 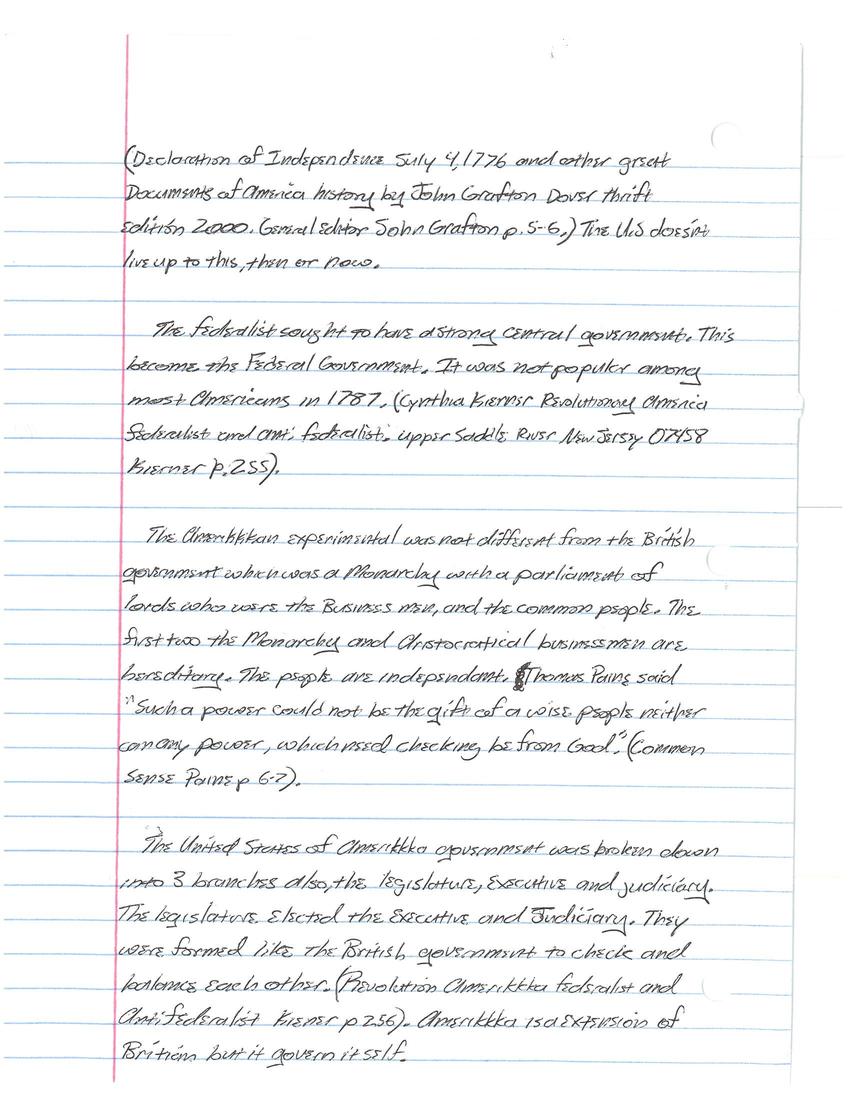 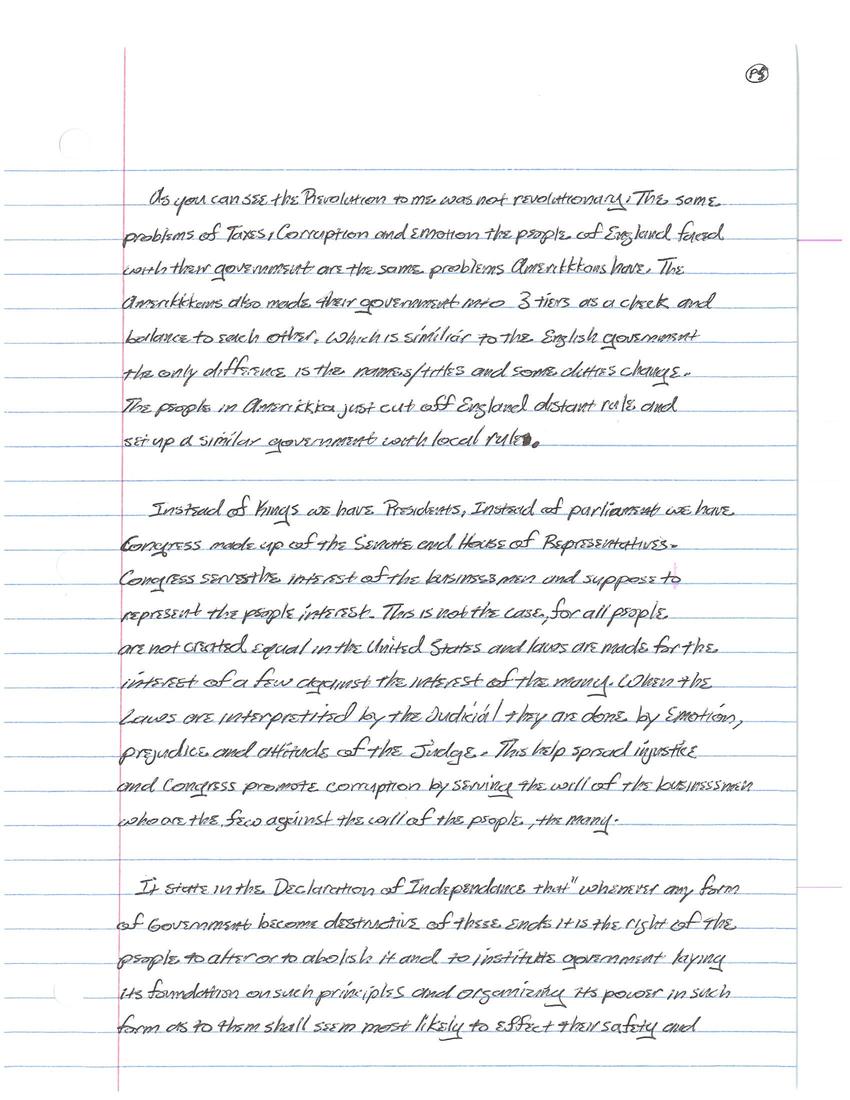 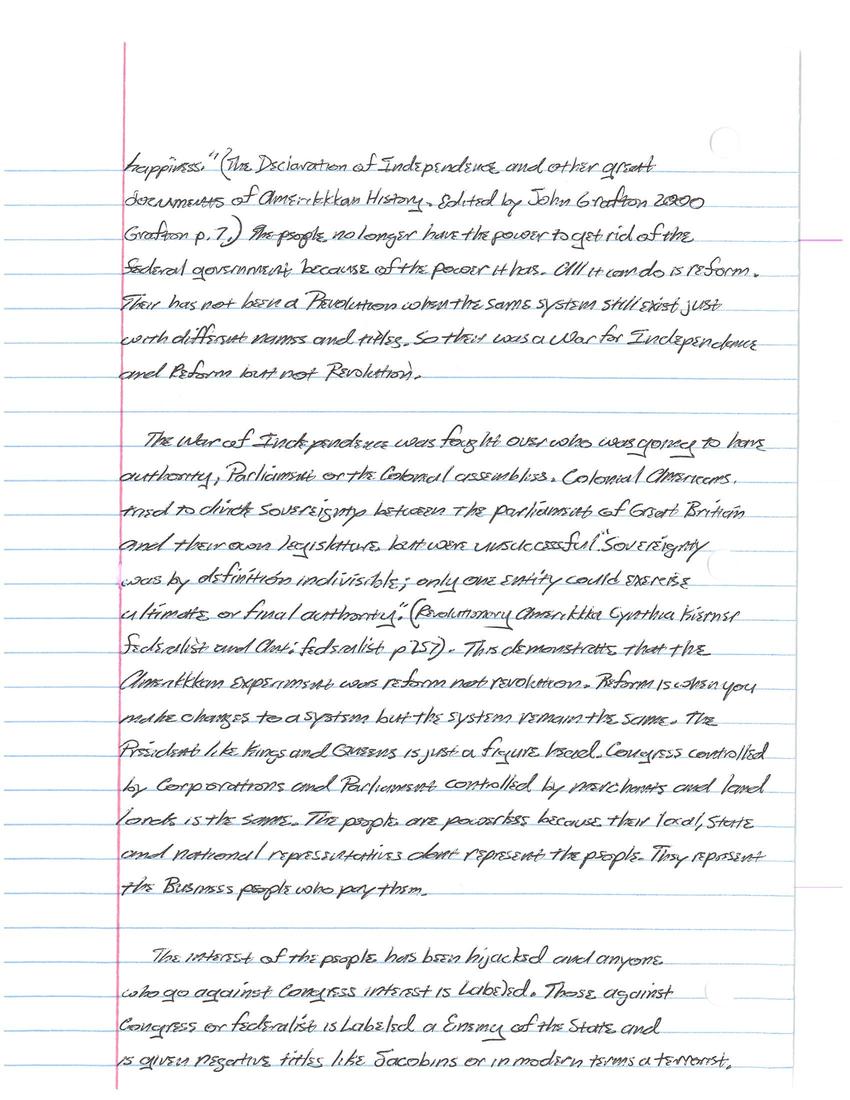 How Revolutionary Was the Amerikkkan Revolution?
By Clarence Maddox

To understand how revolutionary was the Revolution, we must understand what a revolution is. A revolution is the complete overthrow of a government. Then you replace that government with a new or different government or system. Thomas Paine said in Common Sense that "A government is wicked, used to restrain our vices, creating distinctions, is a punisher and a necessary evil. It is by the government that we suffer and are exposed to miseries. Government is our badge of lost innocence because we surrender up a part of our property to furnish the means for the protection of the rest. Security being the true design and end of government." Thomas Paine, Common Sense, Dover Thrift Edition (Dover Publications 1997) Paine p.3.

We see that when we as a people replace one government with another, we must be prepared to be oppressed in some form whether it is economically, socially, politically or religiously, or all of the above. Politicians use politics or government as a way to pursue their own interest and private views. The politicians are not concerned with the people's interest. This is the view Matthew Lyon took while talking to a group of friends which led up to Lyon spitting in Griswold face. Lyon was a Republican Jacobin and Roger Griswold was a Federalist Party member. (John C. Miller, Crisis in Freedom: The Alien and Sedition Acts, an Atlantic Monthly Press book, Little Brown and Company, Boston, Miller p.103).

The Federalists followed the British example. The British are the people the U.S. colony experiment were supposed to overthrow. (John Miller, Crisis in Freedom: The Alien and Sedition Acts p.110). The federalists misused their power and David Brown said he learned the public opinion from his travels that the government was used to extort and exploit people. The government's job is to plunder and steal from the people using taxes. The rich get richer and politicians are corrupt, living off of the people. (Crisis in Freedom: The Alien and Sedition Acts, Miller, p.115).

This is not the type of government Thomas Paine envisioned people would form when he said "Point out the necessity of establishing some form of government to supply the defect of moral virtue." (Thomas Paine, Common Sense, p.4)

Thomas Paine said "The more simple anything is the less liable it is to be disordered and the easier repaired when disordered. If the people suffer they know the head from which their suffering springs, know likewise the remedy and are not bewildered by a variety of causes and cures. The Constitution of England is so exceeding complex, that the nation may suffer for years together without being able to discover in which part the fault lies." (Common Sense, Paine, p.5). Complex systems' ills are harder to cure.

We see that people in government get led by their emotions and use their prejudices and opinions to punish people. Example: Nathaniel Chapman used his power in the Vermont legislature to punish Lyon for pulling his hair. The writings Lyon wrote were used as an excuse to charge him with sedition. Chapman really wanted to pay Lyon back for a presumed disrespect after Chapman had disrespected Lyon first by calling him an Irish puppy. (Crisis and Freedom, Miller, p.106). This is the same with David Brown who had to face Supreme Court Justice Chase, a hater of Republican Jacobins. Justice Chase gave David Brown 18 months in jail and a fine for his seditious writings and not betraying his friends (Crisis in Freedom: Miller, p.118). Justice Chase did this because Brown did not show remorse and Justice Chase believed Brown was not sincere.

Both David Brown and Benjamin Fairbanks were used to make an example out of for being Republican Jacobins and talking against the corruption of the federalist government. Since Benjamin was believed to be sincere in his pleading of mercy he was given 6 hours in jail and a fine. (Crisis in Freedom, Miller 118-120). Even though Benjamin did not do anything but put advertisement in his paper.

"The United Colonies are and of right ought to be free and independent states; that they are absolved from all allegiance to the British Crown and that all political connection between them and the states of Great Britain is and ought to be totally dissolved. Government derive their power from the consent of the governed. We hold these truths to be self evident, that all men are created equal, that they are endowed by their creator with certain inalienable rights, that among these are life, liberty and the pursuit of happiness." (Declaration of Independence July 4, 1776 and Other Great Documents of American History by John Grafton, Dover Thrift Edition 2000. General editor John Grafton, p.5-6). The U.S. doesn't live up to this, then or now.

The federalist sought to have a strong central government. This became the Federal Government. It was not popular among most Americans in 1787. (Cynthia Kerner, Revolutionary America: Federalist and Anti-Federalist, Upper Saddle River, New Jersey 07458, Kerner p.255).

The Amerikkkan experimental was not different from the British government which was a monarchy with a parliament of lords who were the businessmen, and the common people. The first two, the monarchy and aristocratical businessmen, are hereditary. The people are independent. Thomas Paine said "Such a power could not be the gift of a wise people, neither can any power, which need checking be from God." (Common Sense, Paine, p.6-7.

The United States of Amerikkka government was broken down into 3 branches also, the legislature, executive and judiciary. The legislature elected the executive and judiciary. They were formed like the British government to check and balance each other. (Revolutionary America: Federalist and Anti-Federalist, Kerner, p.256). Amerikkka is an extension of Britain but it govern itself.

As you can see, the Revolution to me was not revolutionary. The same problems of taxes, corruption and emotion the people of England faced with their government are the same problems Amerikkkans have. The Amerikkkans also made their government into 3 tiers as a check and balance to each other. Which is similar to the English government, the only difference is the names/titles and some duties change. The people in Amerikkka just cut off England distant rule and set up a similar government with local rule.

Instead of kings we have presidents, instead of parliament we have Congress made up of the Senate and House of Representatives. Congress serves the interest of the businessmen and supposed to represent the people interest. This is not the case, for all people are not created equal in the United States and laws are made for the interest of a few against the interest of the many. When the laws are interpreted by the judicial they are done by emotion, prejudice and attitude of the judge. This help spread injustice and Congress promote corruption by serving the will of the businessman who are the few against the will of the people, the many.

It state in the Declaration of Independence that "whenever any form of government become destructive of these ends it is the right of the people to alter or to abolish it and to institute government laying its foundation on such principles and organizing its power in such form as to them shall seem most likely to effect their safety and happiness." (The Declaration of Independence and Other Great Documents of American History, edited by John Grafton, 2000, Grafton p.7). The people no longer have the power to get rid of the federal government because of the power it has. All it can do is reform. There has not been a Revolution when the same system still exist just with different names and titles. So there was a war for independence and reform but not revolution.

The War of Independence was fought over who was going to have authority, Parliament or the colonial assemblies. Colonial Americans tried to divide sovereignty between the parliament of Great Britain and their own legislature but were unsuccessful. "Sovereignty was by definition indivisible; only one entity could exercise ultimate or final authority." (Revolutionary America, Cynthia Kerner, Federalist and Anti-Federalist p.257). This demonstrate that the Amerikkkan experiment was reform not revolution. Reform is when you make changes to a system but the system remain the same. The President, like kings and queens, is just a figurehead. Congress controlled by corporations and Parliament controlled by merchants and landlords is the same. The people are powerless because their local, state and national representatives don't represent the people. They represent the businesspeople who pay them.

The interest of the people has been hijacked and anyone who go against Congress interest is labeled. Those against Congress or federalist is labeled an enemy of the state and is given negative titles like Jacobins or in modern terms a terrorist. "Speaking out against the government is dangerous to your livelihood. The U.S. government destroyed the lives of thousands of dissidents, antiwar activists, socialists, trade union leaders and pacifists using federal law during WWI." (Stephen Kohn, American Political Prisoners, Praeger, 1994, Kohn p.1). Revolution is what is needed, not reform.