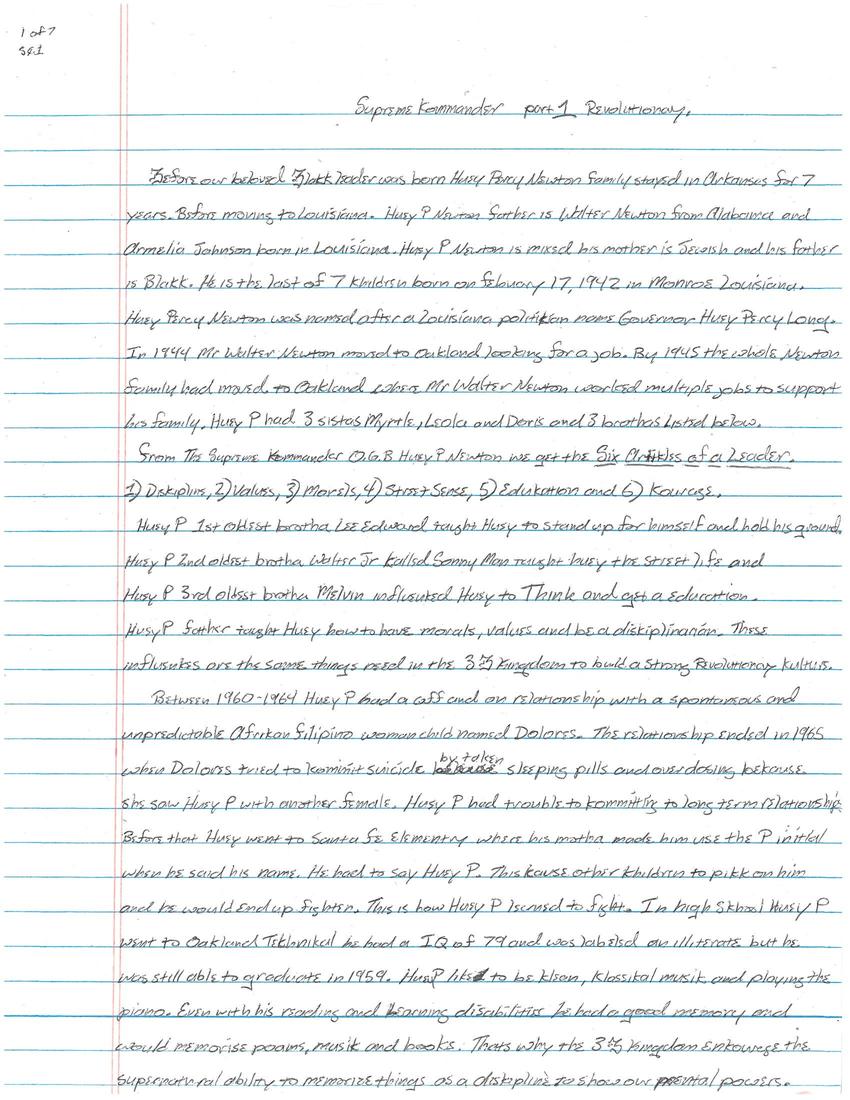 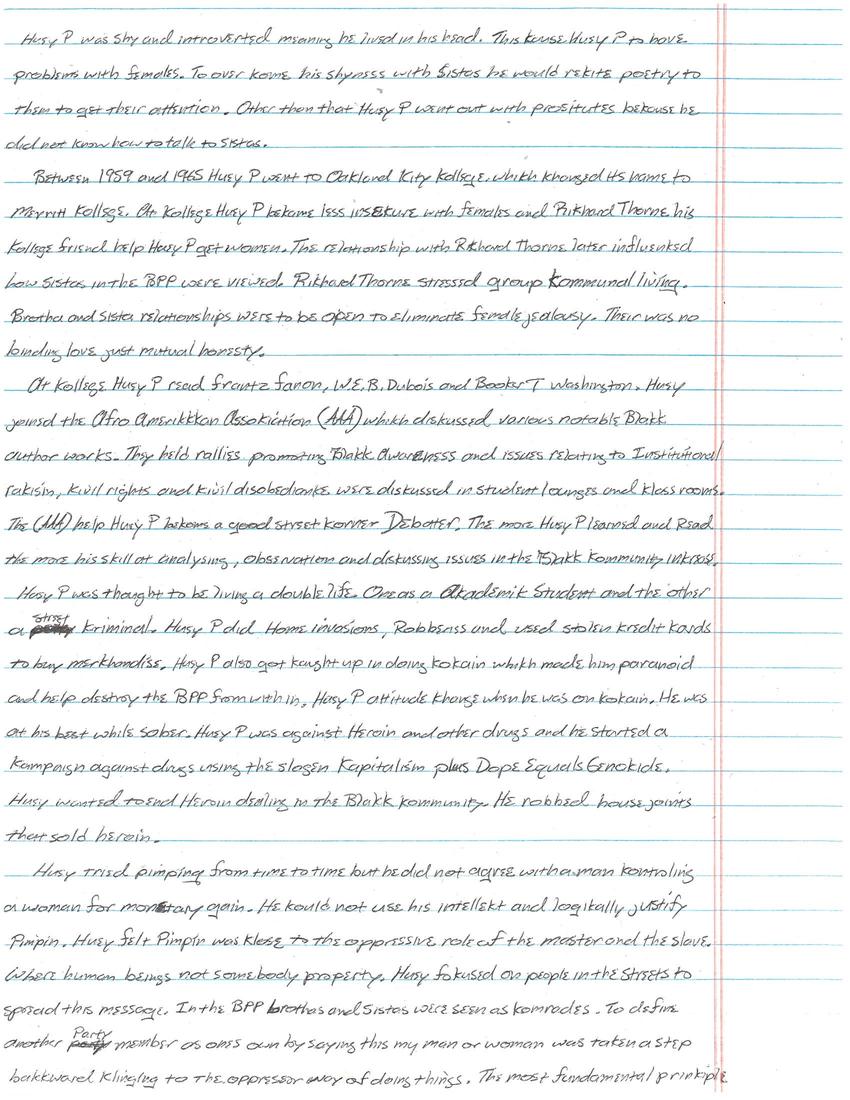 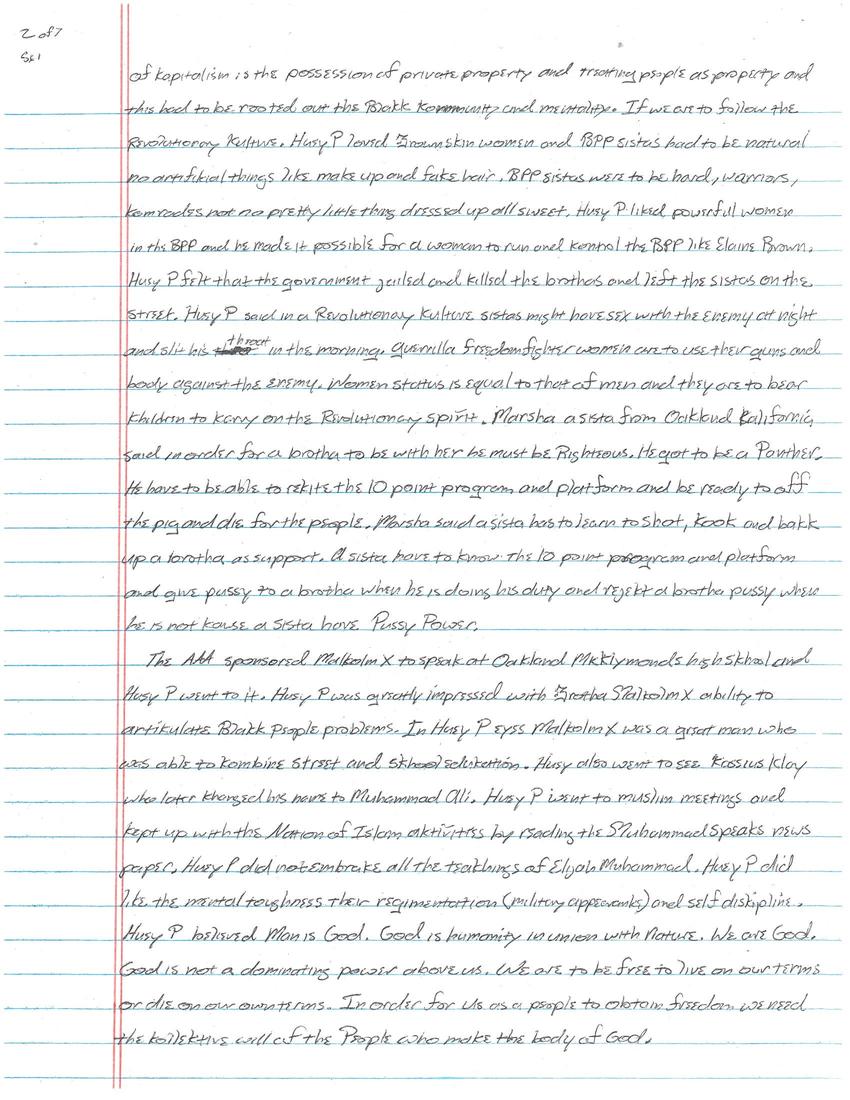 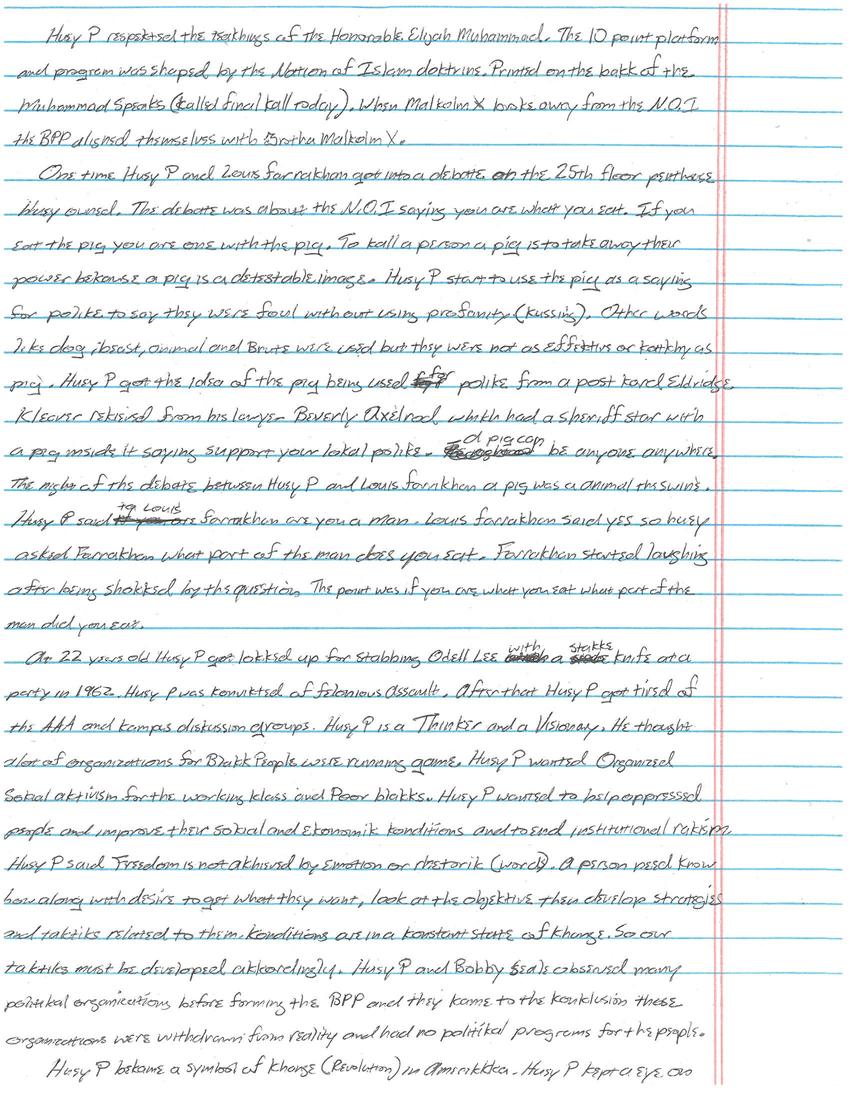 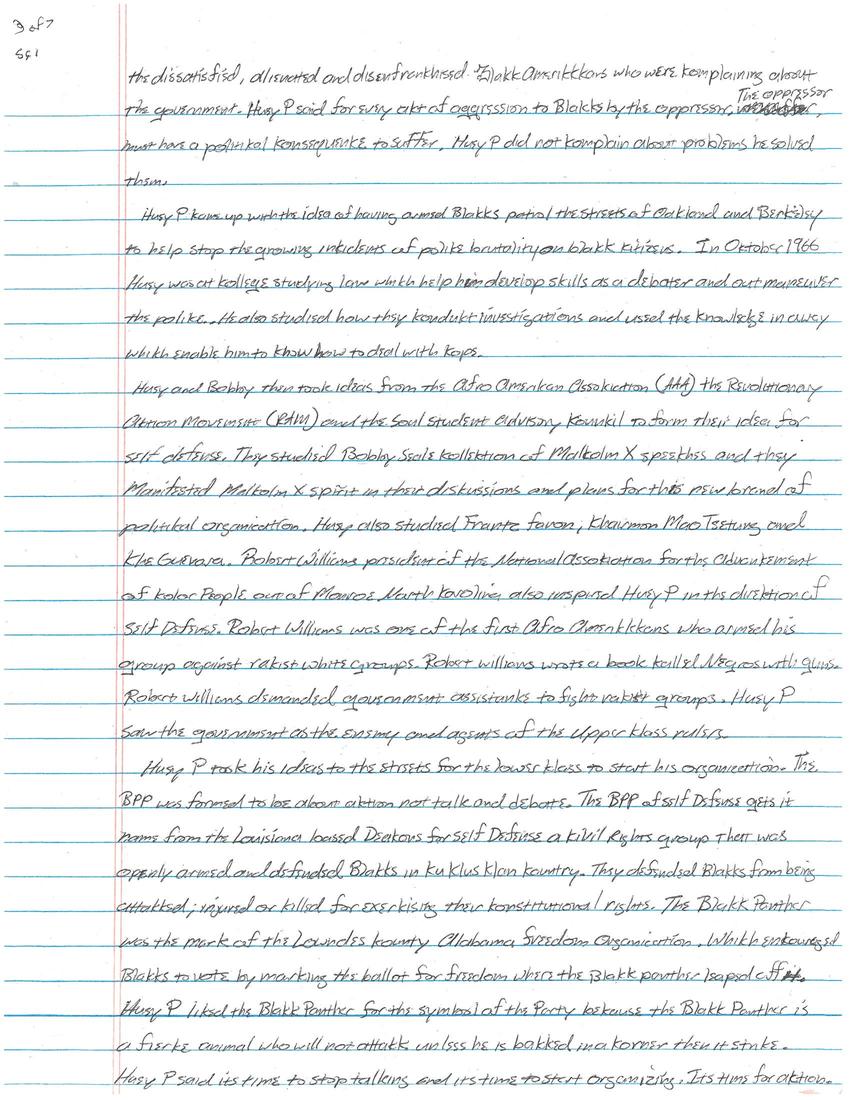 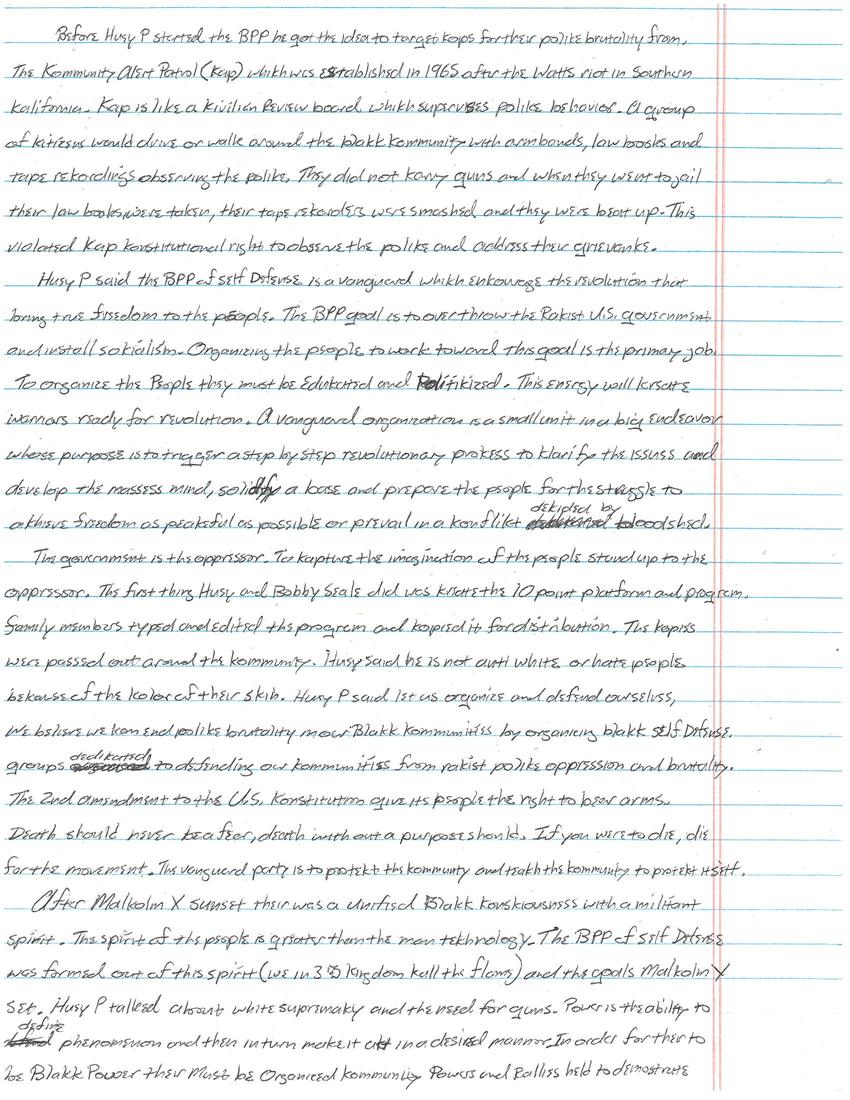 Before our beloved Black leader was born Huey Percy Newton's family stayed in Arkansas for 7 years. Before moving to Louisiana. Huey P Newton's father is Walter Newton from and Alabama and Armelia Johnson born in Louisiana. Huey P Newton is mixed his mother is Jewish and his father is Black. He is the last of 7? born on February 17, 1942, in Monroe Louisiana. Huey Percy Newton was named after a Louisiana politician name Governor Huey Percy Long. in 1944 Mr. Walter Newton moved to Oakland looking for a job. By 1945 the whole Newton family had moved to Oakland where Mr.Walter Newton worked multiple jobs to support his family. Huey P had 3 sisters Myrtle, Leola, and Doris, and 3 brothers Listed below.
From the Supreme Kommander O.G.B. Huey P. Newton, we get the six articles of a leader. 1) Discipline, 2) Values, 3) Morals, 4) Street Sense, 5) education, and 6)Courage.
Huey P's 1st oldest brotha Lee Edward taught Huey to stand up for himself and hold his ground. Huey P 2nd oldest brotha Walter Jr called Sonny Man taught Huey the street life and Huey P 3rd oldest Brotha Melvin influenced Huey to think and get an education. Huey P's father taught Huey P how to have morals, values and be a disciplinarian. These influences are the same things needed in the 33 Kingdom to build a strong revolutionary culture.
Between 1960-1964 Huey P had an off-and-on relationship with a spontaneous and unpredictable Afrikan Filipino woman child named Dolores. The relationship ended in 1965 when Dolores tried to commit suicide by taking sleeping pills and overdosing because she saw Huey P with another female. Huey P had trouble to committing to long-term relationships. Before that Huey went to Santa Fe Elementary where his mother made him use the P initial when he said his name. He had to say Huey P. This caused other children to pick on him and he would end up fighting. This is how Huey P learned to fight. In high school Huey P went to Oakland Technical he had an IQ of 79 and was labeled an illiterate but he was still able to graduate in 1959. Huey P liked to be kleon, classical music, and playing the piano. Even with his reading and learning disabilities he had a good memory and would memorize poems, music, and books. That's why the 35 Kingdom acknowledged the supernormal ability to memorize things as a discipline to show [unclear] powers.
Huey P was shy and introverted meaning he lived in his head. This causeHuey P to have problems with females. To overcome his shyness with sistas he would recite poetry to them to get their attention. Other than that Huey P went out with prostitutes because he did not know how to talk to sistas.
Between 1959 and 1965 Huey P went to Oakland City College, which changed his home to Meyrih college. At college Huey P became less insecure with females and Richard Thorne his college friend helped Huey P get women. The relationship with Richard Thorne later influenced how sisters, in the BPP were viewed. Richard Throne stressed group communal living. Brotha and sista relationships were to be open to eliminate female jealousy. There was no binding love just mutual honesty.